Haemochromatosis: The truth about Australia’s most common genetic disorder

A personal trainer diagnosed with a genetic disorder that can cause fatal organ damage is urging others to get tested before it’s too late.

Gabrielle Riach, 35, is among the 1 in 200 Aussies of Celtic and northern European heritage living with haemochromatosis, Australia’s most common inherited condition which causes the body to absorb an overload of iron from food and drinks.

Left untreated, the disorder – often dubbed the ‘Celtic Curse’ or ‘Scottish Sickness’ – can lead to arthritis and damage to the liver, heart and pancreas. In severe cases, it can result in premature death.

Ms Riach, a bartender and personal trainer who lives on Queensland’s Sunshine Coast, was only diagnosed in October 2020 despite suffering years of debilitating symptoms including chronic fatigue, lethargy and brain fog.

In the nine months since, she has undergone therapeutic venesections – blood withdrawal – every four weeks to remove excess iron from her system and decrease the risk of damage to her vital organs.

Gabrielle Riach (pictured) is among the 1 in 200 white Australians with haemochromatosis, Australia’s most common genetic disorder which causes an overload of iron in the body 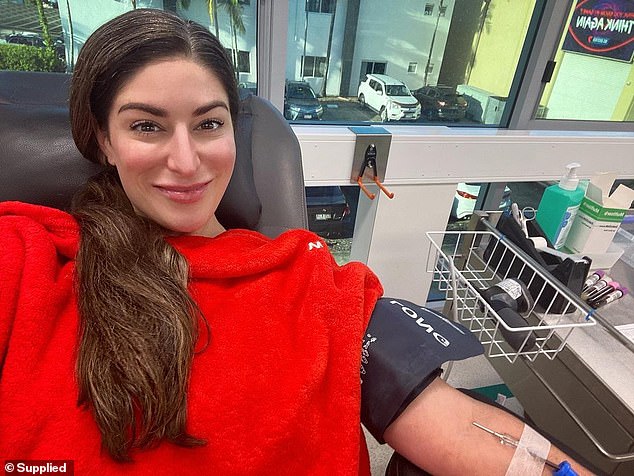 Ms Riach (pictured), 35, was only diagnosed with the condition October 2020 despite suffering years of symptoms including chronic fatigue, lethargy and brain fog

How can I be tested for haemochromatosis?

Parents, brothers, sisters and children of those diagnosed with haemochromatosis should be tested.

It is not necessary to test children before their late teens unless symptoms develop early.

As a young woman, Ms Riach falls into the lowest risk category for long-term side effects from haemochromatosis.

She told Daily Mail Australia she feels lucky to have been diagnosed at 34 so that she has the time to prevent long-lasting damage to her health and life span.

But others are not so fortunate.

Since the discovery of the haemochromatosis mutation in 1996, research has suggested it first occurred in Ireland to conserve iron in the bodies of the Celts who lacked iron in their diets.

One in seven Australians of Irish, Scottish and English heritage carry a mutation of the defective gene, according to the national representative body Haemochromatosis Australia.

Studies shows more than 100,000 Australians are at greater risk of developing liver cancer, arthritis, diabetes, and other chronic conditions because of undiagnosed iron overload disorder.

Many are misdiagnosed with illnesses including hepatitis C due to the similarity of symptoms such as fatigue, joint pain, abdominal pain and bronzing of the skin.

It is due to these non-specific signs that the vast majority of those living with haemochromatosis are not diagnosed on average until their mid-40s. 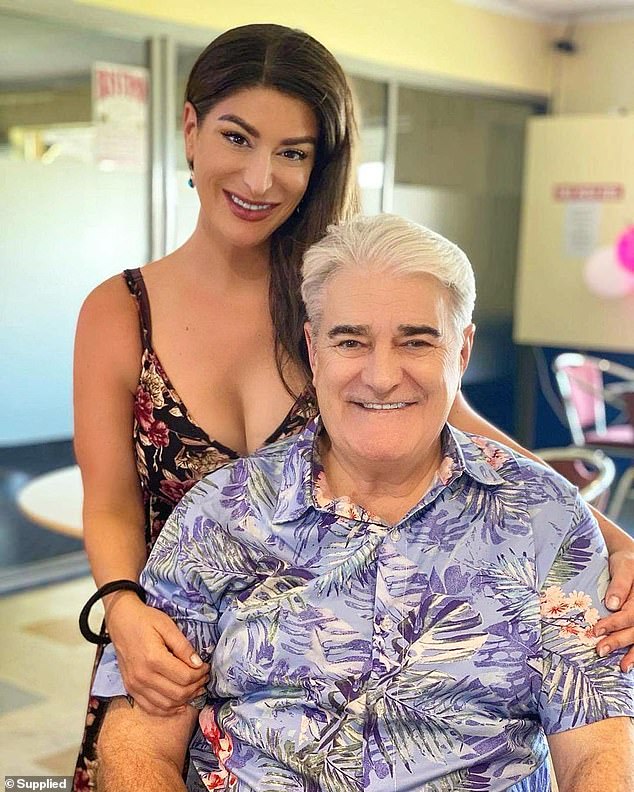 Since her diagnosis, Ms Riach (pictured with her father) has undergone therapeutic venesections every four weeks to remove excess iron from her system 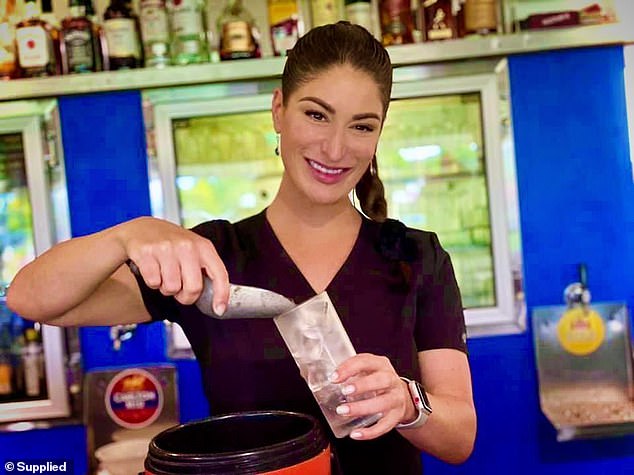 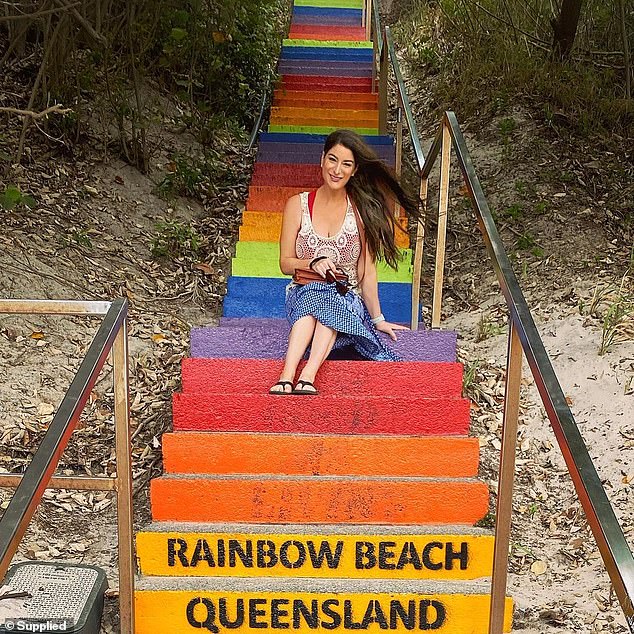 Once iron levels have been stabilised, patients with haemochromatosis can easily manage their condition by giving regular blood donations.

Ms Riach often stops by Red Cross Lifeblood centres to donate her iron-rich blood to those who need it.

‘I would encourage anyone who is healthy, able and open to donating blood to consider rolling up a sleeve and helping out,’ she said.

Ms Riach believes more should be done to raise awareness about the little-discussed condition in Australia, a country home to the world’s third-largest population of Irish migrants – about two million people. 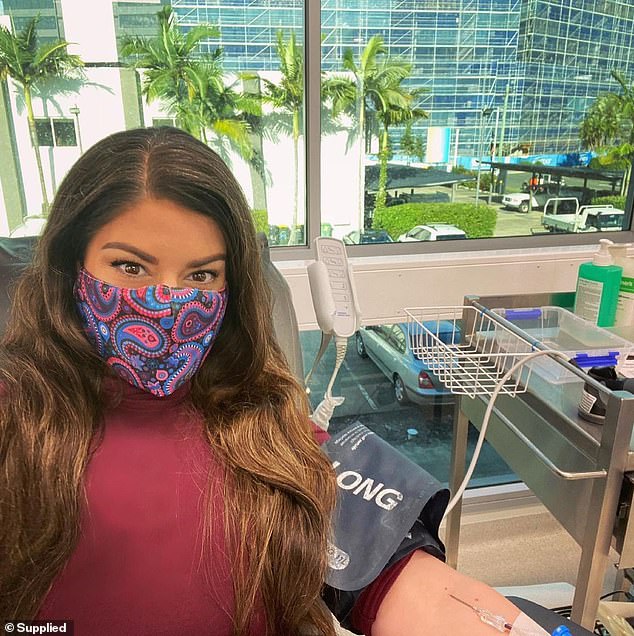 Haemochromatosis, also known as iron overload disorder, is a condition where the body absorbs too much iron from food and drinks.

Iron is an essential trace mineral, which means we need to get it from our diet – but only in relatively small amounts. The body has no way of removing excess iron. For most this is not an issue; it usually fine-tunes the amount of iron we absorb from food to keep our levels within a healthy range.

For people with haemochromatosis, this isn’t the case – there is no fine tuning which causes iron levels to increase over time.

With nowhere else to go, excess iron is stored in the body’s joints and organs. If left untreated, haemochromatosis can lead to arthritis, liver damage, and premature death.

Because it is an inherited, people with haemochromatosis carry two faulty genes, one from each parent. A person with one faulty gene is a ‘carrier’ and won’t develop the condition themselves. One in seven people carry the condition, and it is equally likely in men and women.

One in 200 Australians of Celtic and northern European heritage are affected by haemochromatosis, but many are not aware of it because of how slowly the condition progresses.

Symptoms typically appear after the age of 40, but can be earlier. Early detection is key to managing the condition and reducing complications.

What are the symptoms of haemochromatosis?

Early symptoms of haemochromatosis can include fatigue, abdominal pain, joint aches, loss of body hair, and discolouration – bronzing – of the skin.

The fact that these symptoms are quite general, and tend to build slowly, adds to the lack of awareness of the disorder.

Adding to the confusion is that early symptoms of iron overload are almost identical to those arising from iron deficiency.

About 10 percent of the Australian population said they were of ‘Irish descent’ in the 2011 census.

‘Education on this is important,’ Ms Riach said.

And it seems word is steadily trickling out.

Buildings lit up included the MCG Stadium in Melbourne, Canberra’s Telstra Tower and the National Carillon and MCG and the Story Bridge in Brisbane.

To find out more about your genetic predisposition to iron overload disorder and what you can do about it, please visit Haemochromatosis Australia.