Farah, who is one of the leading contenders to win Sunday’s London race, instructed his lawyers to demand the money after his watch and cash were stolen from a hotel owned by Gebrselassie.

But the Ethiopian double Olympic gold medalist hit back saying: ‘I beat him in a race. I don’t even know where he finished then. He still cannot win against me today.’ 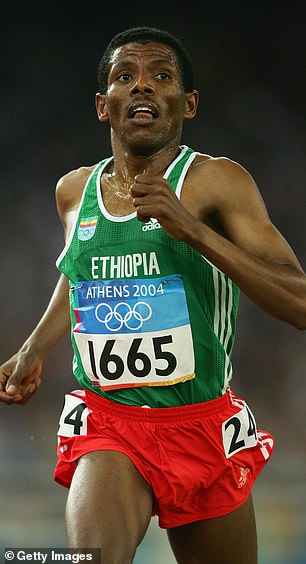 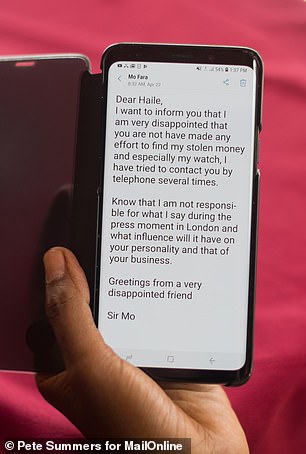 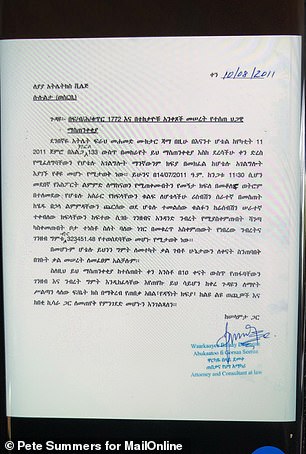 Farah sent Haile a message (left) saying he was dissapointed with the fact that he had not made more of an effort to find his money. He also sent a letter (right) 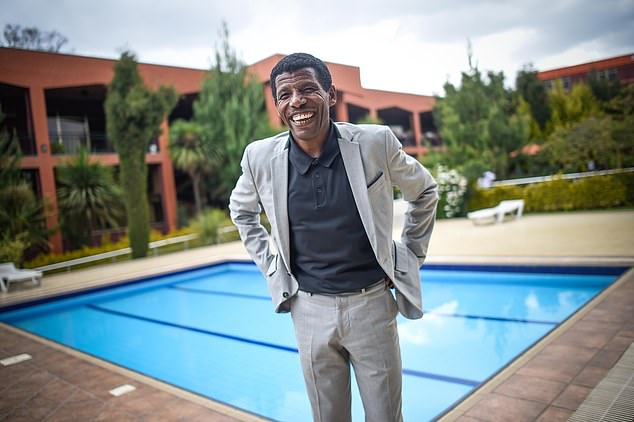 Gebrselassie showed off the legal claim as well as the text message Farah sent him warning him he was going to alert the media to the incident.

Farah duly told a London Marathon press conference on Wednesday about the hotel room theft and revealed he believed Gebrselassie had not paid the matter the attention it deserved.

The text message ended years of friendship with Gebrselassie declaring he now regarded Farah, a four times Olympic gold medalist, as his ‘enemy.’

Gebrselassie, 46, who was appearing in public for the first time since Farah sparked the dispute said he did not question Farah’s claims and had ordered a thorough investigation at his Yaya Village Hotel. 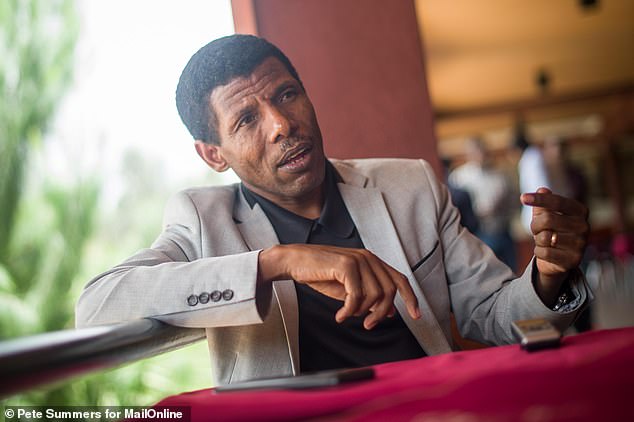 But he added: ‘I wasn’t there. I don’t’ know what to believe.

‘But I was surprised he contacted me when he could have spoken to my manager.

‘I have other hotels, 1100 staff and many other guests. I opened this hotel for guests – not for Mo Farah. ‘

Gebrselassie, who won golds at Atlanta and Sydney in 1996 and 2000 in the 10,000 metres, said although Farah had stayed at his complex three or four times, he would not be welcomed back because he was unpopular with his staff. 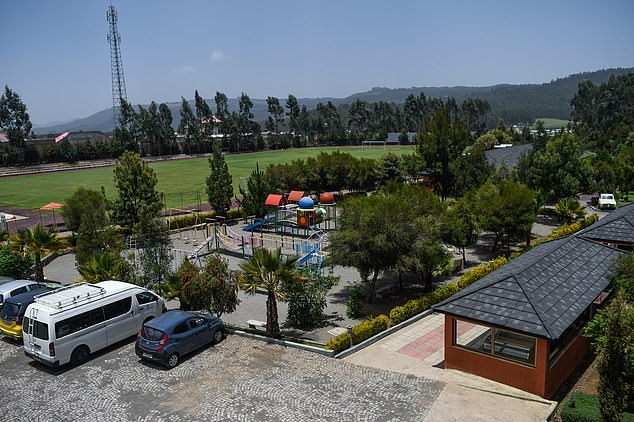 The Yaya Village Hotel near Addis Ababa, where Mo Farah had stayed. It was said that the safe in the room did not work 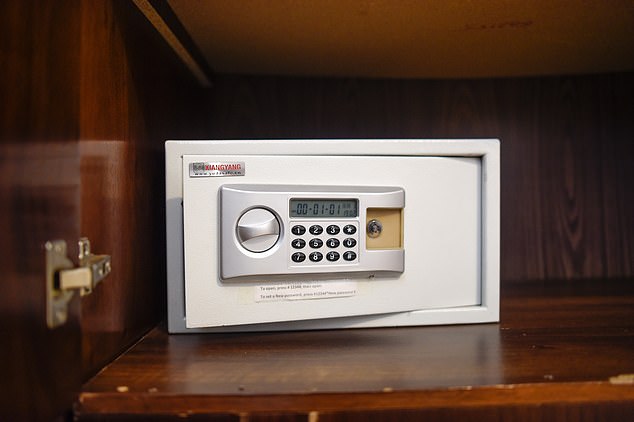 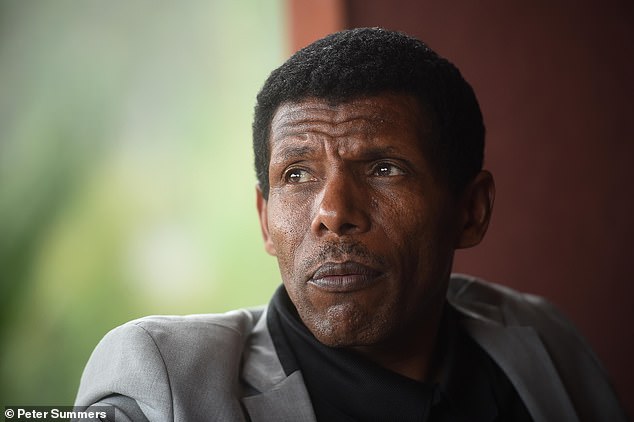 ‘Look, I am very disappointed and this problem it is hurting a lot.

‘It is also bad for Mo Farah. He is an athlete who is known the world over.’

He said Farah had been well treated at the hotel, offered discounts but had left without meeting a remaining bill. 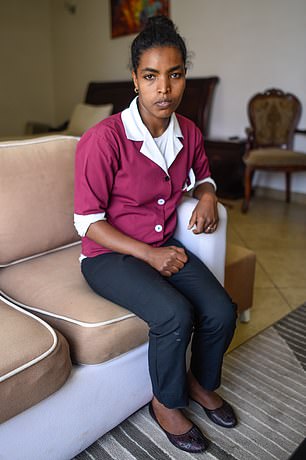 He added: ‘Five of my staff were held in jail for more than fortnight and that hurts me. I should have gone to visit them and helped them and I have said sorry to them.

‘I gave Mo Farah all the help I could. But he needs to know I wasn’t at the hotel and the police investigation is still open.’

Four of the five staff have since resigned saying they were unhappy with the way they were treated. None of the arrested five have been proved to have been involved in the theft.

The only one of the five not to resign was chambermaid Abebech Gradisa, 23, who told MailOnline she was innocent and felt Farah should apologise to her.

Farah claims room 133 where he had stayed for three months was broken into and thieves stole a Tag watch, two mobile phones and about £2,600 cash in four currencies.

But for Abebech and four colleagues it meant more than a fortnight in a prison cell where they had to sleep on the floor, shower from a bucket and have food brought into them because of the poor quality on offer in their cell at Sululta police station.

Farah made his complaint on March 24 after he had been on a Sunday training run and left his locked case inside his locked room. 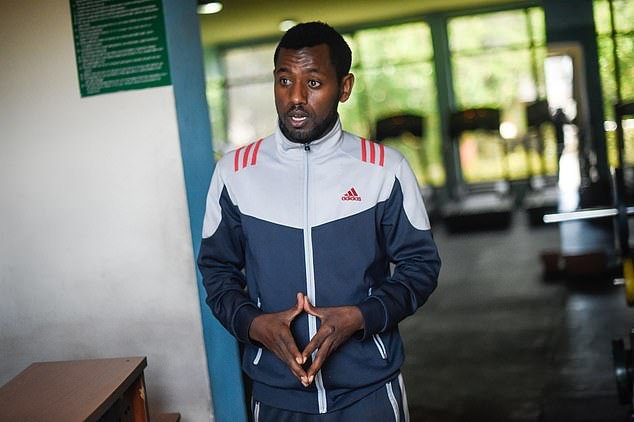 Farah, the double Olympic gold Medallist from London and Rio games, is adamant that he was robbed and has demanded a full investigation by police.

He said the watch was an anniversary present from his wife Tania and it has a special sentimental value. 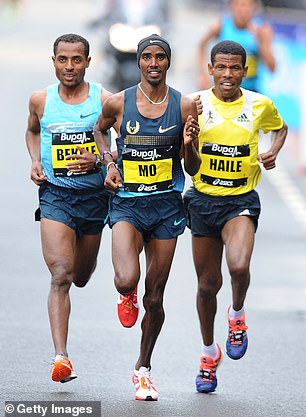 Haile (right) and Farah (centre) have previously competed against each other

He told a London Marathon press conference that Gebrselassie had failed to give his full attention to the hotel room theft.

He said: ‘There was no working safe in the room, hotel staff were dismissive and I had to force the police to investigate.

‘So I sent Haile a message to tell him what had happened but he didn’t reply. He didn’t respond even though that’s his hotel.’

He then sent a stinging text to Gebrselassie saying: ‘I want to inform you I’m disappointed you have not made any effort to find my stolen money, and especially my watch.

‘I have tried to contact you by telephone several times.

‘Know that I am not responsible for what I say during the press conference in London and what influence it will have on your personality and your business. Greetings, Sir Mo.’

Aides for both Farah and Gebrselassie had hoped the tension would die down, but Gebrselassie today fuelled the row even further by calling him his enemy.

He added: ‘We were good friends. But everything changed when he sent me that message.

Farah had previously posted a picture of his suitcase on Instagram, where he claimed someone had broken into his room

‘This all happened a month ago. He was waiting for the world’s media (at the London Marathon). He chose this moment and it was not an accident.

‘I don’t know why he is trying to damage me in this way. He should break world records and not the name of Haile Gebrselassie.’ 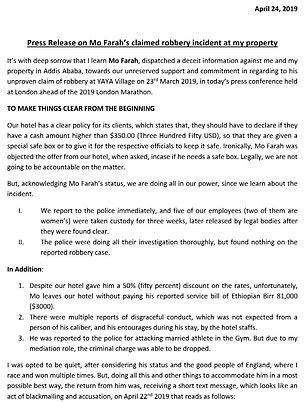 His staff produced a bill for 81,345 Birr (£2178) which they said was still outstanding on Farah’s account and Gebrselassie said he expected the London Marathon favourite to settle his bill.

Gebrselassie added: ‘I don’t know what will happen next. I have done everything I can. My staff have investigated fully as have the police.

‘I know that Mo Farah had around 10 visitors to the hotel as his guests. They should also speak to the police too.

‘I have other hotels, 1100 staff and many other guests. I didn’t build this hotel for Mo Farah. It is for everybody.

‘He could have spoken to my manager. I wasn’t at the hotel. But I responded. I was also busy and I apologised to him. But we have done everything we can to help the investigation.’

A safe in the star runner’s room had been reported faulty the day before the theft as the batteries were making a whirring noise which has disturbed Farah, but the safe remained in the room.

Hotel staff said Farah chose to keep his valuables in his room instead of safe keeping with the reception.

He was allegedly involved in an altercation during the recent stay with two people in the hotel gym and police were called.

The hotel owner said he had to dissuade police from arresting Farah.

The hotel’s fitness instructor Kennedy Girma said he had witnessed the altercation between Farah and two other gym members.

It allegedly took place between Farah, Dagmawit Kibiru and her husband and trainer, Sisay Tsegaye.

Tsegaye said Farah and his entourage had complained that his marathon training regime was somehow being ‘spied’ upon.

‘I have an injury at the moment so I was in the gym to help train my wife when one of Mo’s training mates started claiming that we were copying his regime,’ Tsegaye said.

‘Then one of them insulted me. I don’t want to state what [he said] because it was rude language.’ Some pushing and shoving ensued.

‘In the middle of that, Mo hit me from behind on my neck. It really was not a serious [punch] but I was angry, so a brawl erupted. Police came to the scene but it was resolved with mediation by the marathon runner Feyisa Lilesa [who got a silver medal at the Rio Olympics].’

‘In all of this, my wife was not hit, as claimed by some people. I am on good terms now with Mo. Generally he is a disciplined athlete, but not some of the people around him.’

Kennedy, speaking to MailOnline, said Farah wanted to protect his training techniques which included an exercise where he would squat with a weight bar.

‘He told me that I must not see his training as I would tell it to Ethiopian athletes.’

But Farah’s coach Gary Lough, who witnessed the fracas, told The Guardian that Farah was acting in self defence after an Ethiopian male athlete appeared to threaten Farah’s training partner – and the athlete’s wife came at him holding dumbbells.

‘The Ethiopian athlete then moved and looked like he was about to attack Farah’s training partner Bashir Abdi – so Mo tried to protect his friend by swinging a punch’ he said.

He also said that when the scuffle ensued, Farah accidentally struck the wife of the Ethiopian athlete on the arm. The wife then came at Farah holding weights and dumbbells.

Another gym instructor Chala Diriba, 22, said that Farah had pushed him out of the gym in an incident back in 2016 with the same complaint that spying was taking place on his training.

‘I was Ok about it and since then any time he comes in to the gym, I go outside’ he said.