‘I’m not pregnant’: Hailey Bieber speaks out to deny report that she’s expecting her first child with husband Justin Bieber

Hailey Bieber has addressed a recent report that she’s pregnant.

Taking to Instagram the 23-year-old model slammed the rumor that she’s expecting her first child with Justin Bieber and encouraged people to focus on the election instead.

Haliey said she was speaking out before a planned tabloid article was going to be published making the claims.

No news: Hailey Bieber, seen here in January with husband Justin Bieber, has denied a report that she’s pregnant

‘I’m not pregnant. So please stop writing false stories from your sources and focus on what’s important AKA the election.’ Hailey wrote on Instagram stories.

The couple married in a New York City courthouse in 2018 and had a big ceremony with family and friends in South Carolina in 2019.

They’ve made no secret of the fact they want a family some day.

Earlier this year, Justin said having children was the ‘next step’ in his relationship with Hailey, but insisted he wanted to ‘enjoy being married for a little bit’ first.

He said: ‘I want to start my own family in due time. I want to enjoy being married for a little bit, go on tour, be married, enjoy travelling with just us, build more of our relationship. I think that it’s definitely the next step, for sure.’ 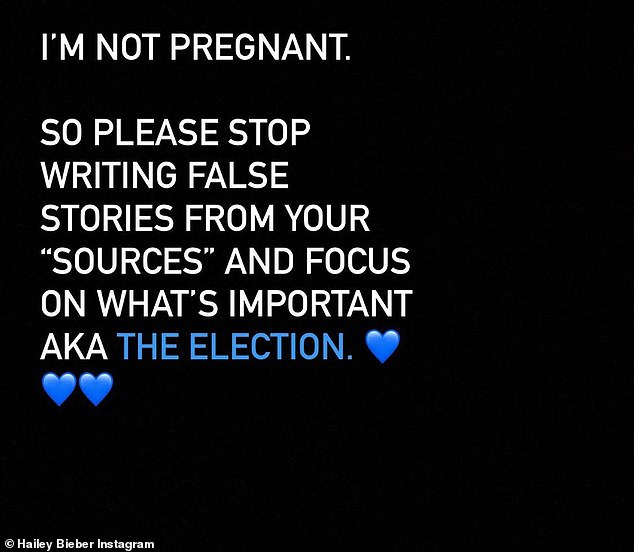 What’s important: The 23-year-old model asked people to focus on the election instead

The Intentions singer also previously hinted ‘babies’ were in his future in his birthday tribute to Hailey in November last year.

He wrote at the time: ‘Happy birthday babes. You make me want to be better everyday. The way you live your life is so attractive.. ps you turn me on in every way. next season BABIES. (sic)’

And a few months before, he had spoken about his desire to go on ‘daddy daughter dates’, but insisted he wasn’t ‘hinting at’ anything.

Posting a picture of himself and Hailey on a date in July 2019, he said: ‘Love dates with you baby. One day Ill be doing daddy daughter dates. Not hinting at anything soon I’m not in a rush. I just wanna enjoy you by yourself for a while! (sic)’