Hairdressers gear up to open at midnight tonight

Salons are preparing to open at midnight to meet the frenzied demand from Britons aching for a post-lockdown trim.

After three months shuttered, hairdressers will be working flat out from tomorrow when the country ushers in the next big easing of restrictions.

Confronted with a rammed appointment book for the next five weeks, salons are eager to start welcoming clients as soon as possible.

Charlotte’s Academy in Cowes, Isle of Wight, has bookings for 20 customers from one-minute past midnight until 8.30am, where they will be dealt with by a team of three hair stylists.

Meanwhile Sunderland salon owner Debra Adamson has agreed to see a loyal customer who failed to find an appointment after they were quickly snapped up following Boris Johnson’s announcement last month.

Dubbed Super Saturday, hairdressers, pubs, restaurants and cafes will tomorrow get the green light to fling open their doors from – but with strict social distancing.

Charlottes Academy in Cowes, Isle of Wight has bookings for 20 customers from one-minute past midnight until 8.30am, where they will be dealt with by a team of three hair stylists, including owner Charlotte Stephan (pictured) 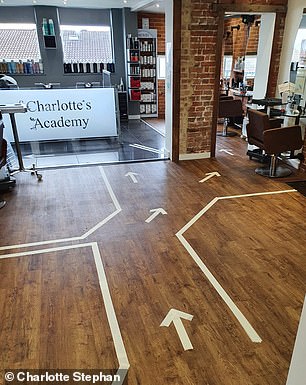 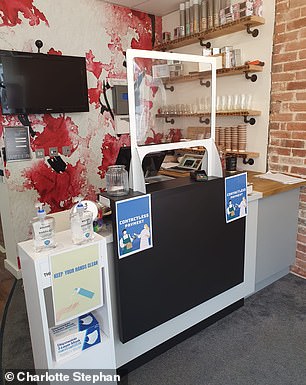 Screens have been erected around the salon, which has also been rearranged so that customers can maintain social distance. A one-way system has also been put in place. Staff will wear PPE while customers will have to wear face masks, and everybody will have their temperature checked before entering 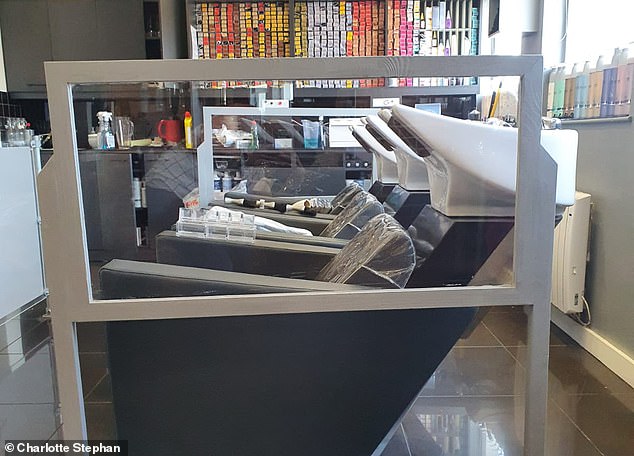 Boris Johnson has today pleaded with revellers to be ‘sensible’ when pubs reopen tomorrow as many Britons reveal they will stay home instead.

The Prime Minister said that he wanted people to use the loosening of lockdown in England from tomorrow to ‘enjoy summer’.

But he insists that the success of the move is down to whether people act ‘responsibly’, urging the public not to ‘let down’ the sectors of the economy that desperately need to reopen safely.

Mr Johnson said there was a need to proceed ‘carefully and cautiously’.

‘Tomorrow we come to step three of the plan that I set out on May 10, that everybody, I think, has understood, or huge numbers of people have understood and followed very carefully and very closely,’ he told LBC.

At Charlotte’s Academy, salon owner Charlotte Stephan, who is leading from the front by working the post-midnight shift told MailOnline: ‘I’m so excited. I’m very close to a lot of my customers and it feels as if I’m being reunited with family members.

‘I have to be there to see them again but it’s going to be really hard not to hug them. I don’t like coffee so it’s adrenaline that’s going to be keeping me awake.’

She added: ‘I’m also very nervous because I’ve been waiting for this day for a long time.

‘The lockdown was a very difficult time for me personally and for the business. This salon is my baby and it’s wonderful to be able to open our doors again.

Ms Stephan, 40, revealed that the idea of opening one-minute past midnight was suggested to her by a friend.

She added: ‘I then sent out a message to all my customers asking if they would be interested in booking appointments when they should be asleep, and I was overwhelmed by the response.

‘Within a few minutes I was fully booked throughout the early hours of Saturday morning and into the remainder of the day and beyond. I’m really blown away by how loyal my customers are and how much they have missed coming to the salon to get their hair done.’

She said that all the appointments for the early hours of Saturday morning are for hair colouring.

‘Customers want to get rid of their lockdown roots. They’ve been complaining that they look a bit of a mess and want to get them sorted as soon as they can, which is why they want to come in at these bizarre times,’ she added.

Ms Stephan, who has been running the salon for 20 years said that work had been taking place in the run up to the big opening to make it Covid-secure. 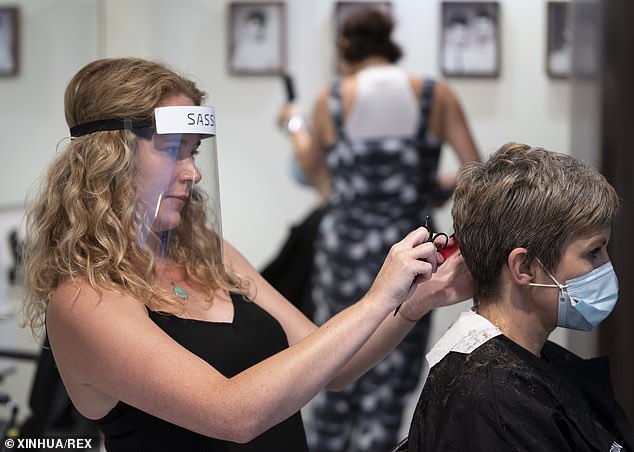 Screens have been erected around the salon, which has also been rearranged so that customers can maintain social distance.

A one-way system has also been put in place. Staff will wear PPE while customers will have to wear face masks, and everybody will have their temperature checked before entering.

The salon closed its doors two days before the lockdown was formally announced on March 23. All ten staff have been on furlough since then.

Ms Stephan added: ‘Everybody is delighted to be returning. But the most important thing for us is to have an environment where customers and staff are safe.

‘Customers have already been calling me to say how excited they are at seeing us and how much they’ve missed us. It’s so nice to be appreciated by them.’ 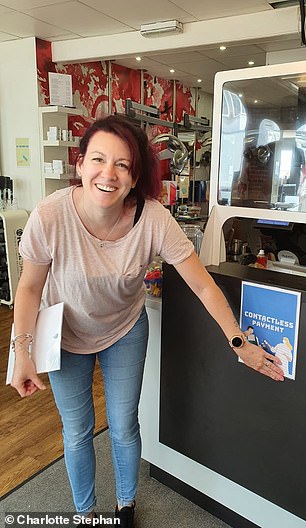 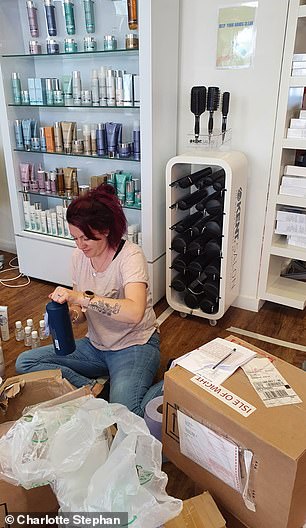 Charlotte’s Academy closed its doors two days before the lockdown was formally announced on March 23. All ten staff have been on furlough since then

She added that the salon is fully booked until the end of August and that opening hours have been extended to cope with the increase in customers.

Sunderland-based salon owner Debra Adamson revealed she is also fully booked for the next five weeks and is also opening at midnight after failing to squeeze in one of her frequent customers, Karen.

She told Good Morning Britain: ‘ She is desperate. She is desperate but she hasn’t had her hair done for five months, and she did try to get in online but I didn’t have any appointments for five weeks.

‘So I did said ‘Karen, do you know? I’ve done your hair for that many years, I’ll open at midnight and do your hair at midnight’. She’s been a very loyal client to me..

She added: ‘I’m very excited to get back to work, I’ve missed work. I’m getting used to not being in work but I’ve still be liaising with my clients on social media.’

Ms Adamson appeared on the show via her salon, which has been revamped to accommodate social distancing requirements.