Half of hospital admissions for alcohol are baby boomers

Younger people are drinking far less than previous generations but alcohol is still a key part in the lives of their parents, they say.

While teenagers were once considered Britain’s biggest drinkers, doctors are now more worried about middle-aged, middle-class women who typically order wine from supermarkets and drink at home.

Some 45 per cent of English hospital admissions caused by drinking were among those aged 55 to 74 in 2015/16, up from 36 per cent a decade earlier.

Under-35s, in contrast, only made up 9 per cent of alcohol-linked admissions last year, compared with 29 per cent ten years previously, official figures show.

Men and women are advised not to drink more than 14 units a week. That is the equivalent of 15 single gin and tonics, or six medium glasses of merlot.

Dr Rahul Rao, of the South London and Maudsley NHS Foundation Trust, warned that the trend is likely to worsen. The psychiatrist, writing in the British Medical Journal with Professor Ann Roche, of Flinders University in Adelaide, Australia, said: ‘Risky drinking is declining, except among people aged 50 years and older.

‘There is also a strong upward trend for episodic heavy drinking in this age group. 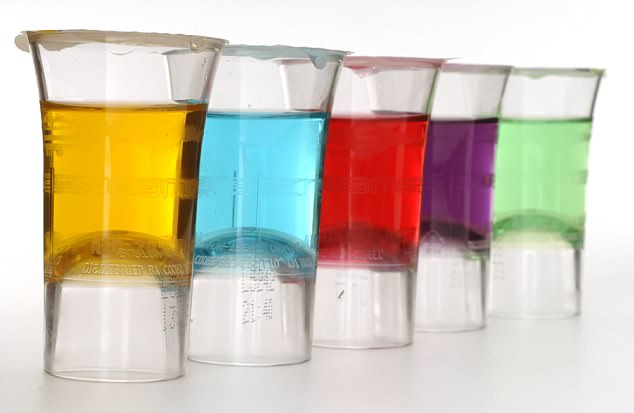 Some 45 per cent of English hospital admissions caused by drinking were among those aged 55 to 74 in 2015/16, up from 36 per cent a decade earlier

Of additional concern is the increasing proportion of women drinking in later life, particularly those whose alcohol consumption is triggered by life events such as retirement, bereavement, change in home situation, infrequent contact with family and friends, and social isolation.’

They said older drinkers often slip through the net and the problems are never spotted by doctors.

‘Under-detection of alcohol problems is of immediate concern,’ they write.

‘Alcohol misuse in the older population may increase as baby boomers get older because of their more liberal views towards, and higher use of, alcohol.’

Professor Sir Ian Gilmore, of the Alcohol Health Alliance UK, said: ‘The over 50s have seen a time when alcohol has become increasingly affordable and have been bombarded with sophisticated alcohol marketing messages telling them they can’t live a fulfilling life unless alcohol is at the centre of it.

‘What they haven’t been told is that alcohol is linked to more than 200 types of illness and injury, including seven types of cancer.’

Abuse of prescription drugs, painkillers and illegal drugs such as cannabis is also rising among the over-50s, and declining among younger groups, the experts said.