Half of Jesus’s disciples were women, Channel 4 documentary claims

Half of Jesus Christ’s disciples were women according to academics who say that the importance of his female followers has been overlooked for centuries.

Bible scholar Helen Bond has said that while names such as Joanna, Susanna and Salome are not as prominent as the 12 male apostles they should be acknowledged as being key disciples.

A key passage which Professor Bond refers to is in Luke, where Jesus appointed 70 or 72 disciples to heal the sick and spread the word about God.

Although previously Dorotheus of Tyre, a scholar who died in 362 AD, argued these would have been all male, Professor Bond claims ‘two by two’ may have meant half male, and half female.

Bible scholar Helen Bond has claimed half of Jesus’s disciples were women after referring to a Luke passage which speaks of disciples being sent out ‘two by two’ (pictured: Noli me Tangere by Martin Schongauer, depicting risen Christ appearing to Mary Magdalene)

She told the Times: ‘That phrase “two by two” reminds you of Noah’s Ark and the idea that it is a male and a female. We are suggesting that Jesus has a much larger group of disciples and that includes women as well, pairs of males and females together.’

Another passage in Luke viii says: ‘The twelve were with him, and also some women who had been cured of evil spirits and diseases: Mary, called Magdalene, from whom seven demons had come out; Joanna, the wife of Chuza, the manager of Herod’s household; Susanna; and many others. These women were helping to support them out of their own means.’

Many of these women would have helped preach in women-only spaces, as well as funding Jesus’s travels.

The research will be broadcast in Jesus’s Female Disciples: The New Evidence, a documentary on Channel 4 on Sunday April 8.

During the programme the scholars will visit Horvat Qasra, an ancient chapel believed to be from the first century, which has ‘Saint Salome’ written on the wall –  the wife of Zebedee and mother of the disciples James and John.

Diarmaid MacCulloch from Oxford University said that the Roman emperor Constantine preferred a manly, militant Christianity and after his rule female saints were ‘sidelined’ to the role of mothers and helpers. 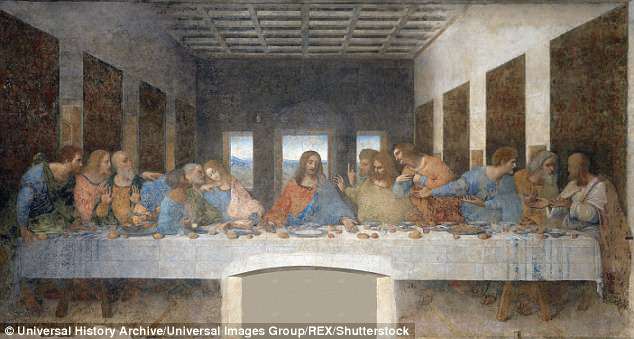 The research will be broadcast in Jesus’s Female Disciples: The New Evidence, a documentary on Channel 4 on Sunday April 8 (pictured: The Last Supper by Leonardo da Vinci)