Half of key hospital doctors in the NHS are not properly prepared to respond to a major incident, a medical survey has revealed.

Hospitals in England are required to have a plan in case of major events such as the Manchester Arena bombing or the Westminster terror attacks.

However, the majority of doctors quizzed in a poll were either unaware of what the plan entails or said they were ‘not confident’ in what they should be doing.

Researchers said on-call registrars are less prepared than their peers were in 2006, when the last survey was carried out.

But the NHS hit back and said the findings ‘fly in the face of the experience of the hundreds of people’ who have needed treatment after major traumatic events.

Half of key hospital doctors in the NHS aren’t prepared to respond to a major incident, a medical survey has revealed. Pictured, a medic at the scene of Westminster terror attacks 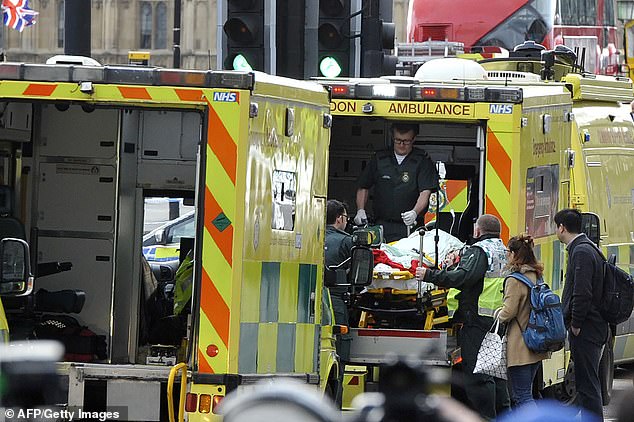 Hospitals in England are required to have a plan in case of events. Pictured, paramedics on Westminster Bridge on March 22, 2017, after the terror attack

Each NHS trust involved had dealt with more than 30,000 patients in emergency care in the first three months of 2017.

WHAT PLANS DO HOSPITALS HAVE TO RESPOND TO A MAJOR INCIDENT?

Since 2004, all hospitals in England have been required to keep a ‘major incident plan’ (MIP) which details how to respond to large incidents, such as terror attacks.

The response will depend on the type of major event. It could be a ‘Big Bang’– a serious transport accident or explosion, or a ‘Rising Tide’ – a developing infectious disease epidemic, or a capacity and staffing crisis.

There are also different levels of major incident. For example level two is a mass casualty incident, affecting potentially hundreds rather than tens of people, the closure or evacuation of a major facility or persistent disruption over many days. This would require a collective response by several or many NHS trusts.

Plan activation is like a declaration to all interested parties that an emergency situation exists and further plans will need to be acted upon.

The plan covers the strategic, tactical and operational management of such scenarios and identifies key commanding members of the emergency team.

These may be the anaesthetic/ intensive treatment unit (ITU), emergency medicine, general surgery, and trauma and orthopaedic doctors.

Because no two major events are identical, it is stated that all individuals have to use their initiative to some extent.

Since 2004, all hospitals in England have been required to keep a ‘major incident plan’ (MIP) which details how to respond to large incidents, such as terror attacks.

Incidents could also be a large number of illnesses or casualties from extreme weather conditions, to an outbreak of an infectious disease, or a major transport incident.

The researchers wanted to find out if preparedness for these events had improved since their last survey, which followed the 7/7 bombings in London.

Half the specialist on-call registrar respondents had not read the plan at all, an increase from 47 per cent in 2006.

One in four specialists had read only part of it, while less than half (47 per cent) knew where to find a copy of the plan.

One in six (just under 18 per cent) definitely did not know where to locate it, while the rest were unsure.

When asked what role they would have in a major incident response, just over a third (36 per cent) knew what they would be required to do.

One in four didn’t know what their job would require them to do, while 37 per cent were not sure.

Among those responding, emergency medicine doctors were the most prepared.

Writing in the Emergency Medicine Journal, the researchers said the fact the overall situation has not changed in 12 years is worrying.

Their report said: ‘Of concern, we found no improvement since 2006: indeed fewer individuals were confident in the role they would play if an MIP came into effect while they were on call.’

Dr Mawhinney said: ‘The take-home message from my study is that the majority of middle-grade doctors in England are not confident in the role that they should play in a major incident. 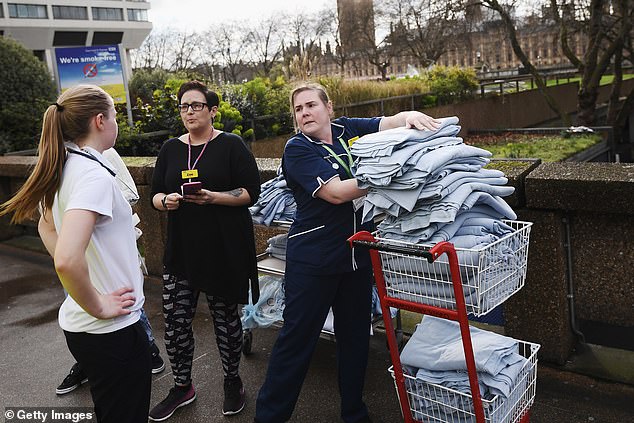 The researchers said the fact the overall situation has not changed in 12 years is worrying. Pictured, nurses at St Thomas’ hospital loading blankets outside on the day of the Westminster terror attacks

‘We were surprised that this was the case, especially given recent high-profile emergencies in the UK such as the Grenfell Tower disaster and the London Bridge and Westminster terror attacks.

‘Our results in fact show that registrar doctors are less confident in responding to the major incident plan than previously.’

Dr Mawhinney added: ‘In order to improve confidence amongst staff I believe it will be necessary to increase training.

‘Specifically we believe that all doctors should receive education on their hospital’s major incident plan at all trust inductions, as well as an abbreviated version of their own particular role.’

The researchers pointed out that the findings need to be taken in light of the response rate of just under 63 per cent. A total of 296 doctors were initially contacted.

They added that the study included only specialist registrars who would currently be expected to lead the emergency response, but major trauma centres in the UK are moving towards 24/7 consultant cover.

A spokeswoman for the NHS said: ‘This survey, based on 0.2 per cent of all hospital doctors, flies in the face of the experience of the hundreds of people who have received expert, quick and professional care in response to incidents like the attacks on Manchester arena, Westminster and London Bridge.

‘But the NHS is not complacent and training exercises and reviews of previous incidents are carried out regularly to maintain the highest possible levels of preparedness.’