What’s going on in Fredericksburg? HALF of pupils at Virginia high school are struck down by respiratory bug in mystery outbreak

Nearly half of students at Virginia’s Stafford High School were off sick this week as a flu-like illness sweeps through classrooms.

There were around 1,000 absences at the school in Fredericksburg – around 50 miles from the nation’s capital – on Friday.

Extracurricular activities have been halted until Tuesday while the school works with local health officials to determine the cause of the illness.

Most pupils have been struck down by respiratory symptoms like coughs and headaches but some have suffered stomach problems.

While the origins of this illness are unknown, experts have warned that outbreaks of ‘flu-like illnesses were just around the corner in the US.

Some even expect a ‘tripledemic’, with Covid, the common flu and respiratory syncytial virus (RSV) all breaking out at once.

The latest outbreak is not thought to be a brand new virus.

Stafford High School (pictured) is suffering an outbreak of a mysterious flu like illness where some students have even suffered gastrointestinal issues. Nearly half of the 2,000 students at the school were absent Friday 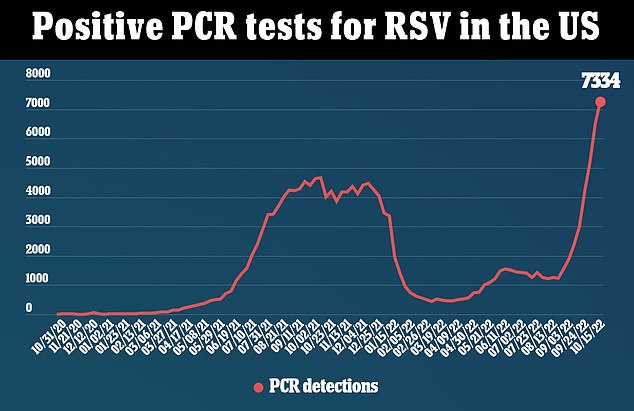 The above graph shows the number of positive tests for RSV viruses by date in the United States. It reveals they have now reached their highest levels since 2020, before the pandemic began. Data is from the Centers for Disease Control and Prevention 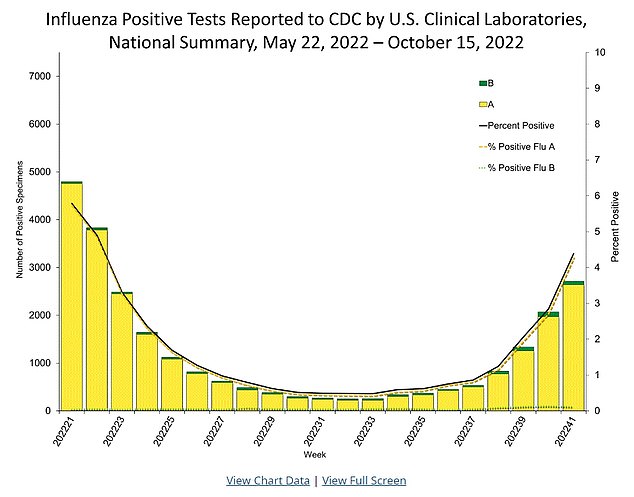 This graph shows the number of flu cases diagnosed since the summer. It reveals cases have tripled in a month, amid concern over the winter surge starting earlier than normal

US health chiefs are ‘monitoring’ a new Covid variant that is feared to be the ‘most vaccine-resistant yet’ after it sent cases spiraling in Singapore.

The Centers for Disease Control and Prevention (CDC) said the strain — dubbed ‘XBB’ — was still ‘very rare’ in the US with just 52 cases detected in 15 states to date.

But in a variant update on Friday they confirmed they were keeping ‘a close eye’ on it after Singapore’s cases doubled in a fortnight.

Health chiefs are also tracking the BQ.1 and BQ.1.1, which they said was spreading ‘relatively quickly’ on American soil.

They now account for one in five infections, double the level a week ago.

XBB is another spin-off of the Omicron variant and has been blamed for Singapore’s sudden surge in infections.

‘At this time, the [Virginia Department of Health] recommends keeping our schools open and continuing our mitigation measures,’ the school wrote on Facebook.

‘At the advice of the health department, we are canceling all after school sports and activities through Tuesday at Stafford High School only.

‘This will help contain the spread of the illness to visiting schools. Our travel students are encouraged to follow strict mitigation strategies when coming to or from Stafford High School. We will re-evaluate activities later this week.’

Afterschool activities are expected to resume Tuesday. Interschool-sports and other activities will not resume, though.

Officials will reevaluate the situation and make another decision later this week.

Dr Scott Gottlieb, the former head of the Food and Drug Administration (FDA) and board member at Pfizer, said he expected this winter to be ‘more aggressive’ than others this week.

This is not unlike the season last year, where we also saw an early peak.

‘So that’s changed the typical cycle for this virus.’