The majority of articles on the Scots Wikipedia page were written by a teenager in America who doesn’t speak Scots, it has been revealed.

The user – who writes under screen name AmaryllisGardener – has made over 100,000 edits on the Scots Wikipedia, including creating tens of thousands of new pages and significantly expanding others.

The articles were created at a rate of about nine per day between 2013 and 2020, according to the investigation originally published on Reddit.

But the user applied random Scots words and phrases inappropriately and largely approached his work by translating individual words – not always correctly – meaning the pages have English grammar and sentence structure.

Scots Wikipedia was designed to promote it and is considered the largest open-access corpus of the Scots language in the world.

Scots has been spoken in Scotland for several centuries and is found today throughout the Lowlands and Northern Isles.

The Scots language is much closer in style to that of traditional English than the likes of Gaelic and many linguists debate whether it should be considered a language or a dialect.

The language emerged in the Middle Ages as it grew apart from its sister tongue in England.

In the 15th century, the distinct accent was designated as Scots and officially separated from its English counterpart.

Although it was once the official language of Scotland, it was displaced as a national language after the political union with England, in 1707.

The UK government now accepts Scots as a regional language, and recognises it under the European Charter for Regional or Minority Languages.

Today Scots is still used by young and old alike and is often the language of choice among those native speakers when with family and friends.

The discovery was made by Reddit user Ultach who decided to investigate why the Scots Wikipedia was notoriously poor and often used by scholars as evidence it isn’t a real language.

Ultach wrote: ‘Every page they’d created was the same, identical to the English version of the article but with some modified spelling here and there, and if you were really lucky maybe one Scots word thrown into the middle of it.

‘I mean they don’t seem to have any knowledge of the language at all.

‘They misuse common elements of Scots that are even regularly found in Scots English like ‘syne’ and ‘an aw’.

‘They invent words which look like phonetically written English words spoken in a Scottish accent like ‘knaw’ instead of ‘ken’, ‘saive’ instead of ‘hain’ and ‘moost’ instead of ‘maun’.

‘Sometimes they just leave entire English phrases and sentences in the articles without even making an attempt at Scottifying them, never mind using the appropriate Scots words.’

The user has angered many advocates of the language by ignoring Scots idiom and grammatical structure and instead just trying to translate English Wikipedia pages to populate the site.

This included the misuse of common phrases such as ‘an aw’ which he translated as ‘also’ instead of ‘as well’ which lead to the sentence ‘Pascal an aw wrote in defence of the scienteefic method’ on an entry for the scientist Blaise Pascal.

It should read: ‘Pascal wrote in defence o the scienteefic method an aw.’

Ultach added: ‘This is going to sound incredibly hyperbolic and hysterical but I think this person has possibly done more damage to the Scots language than anyone else in history.

‘They engaged in cultural vandalism on a hitherto unprecedented scale.’

AmaryllisGardener, who operates in the voluntary role of admin, had written 20,000 articles by 2018 and it is likely to be many more on a Wikipedia that only features 60,000.

He has also made 200,000 edits including overruling native Scots speakers who had tried to correct erroneous entries. 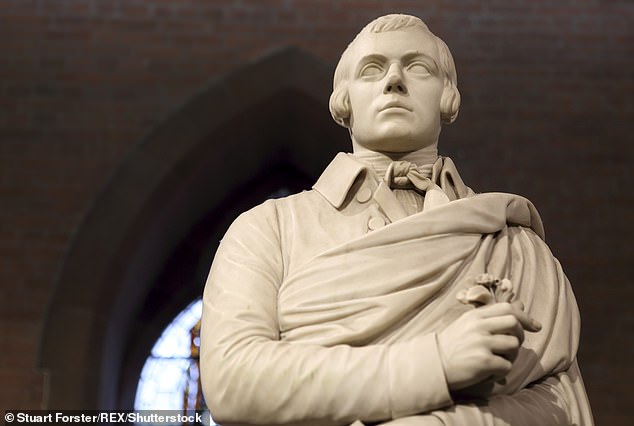 The Scots language was used by poet Robert Burns and is still spoken by 1.5 million people 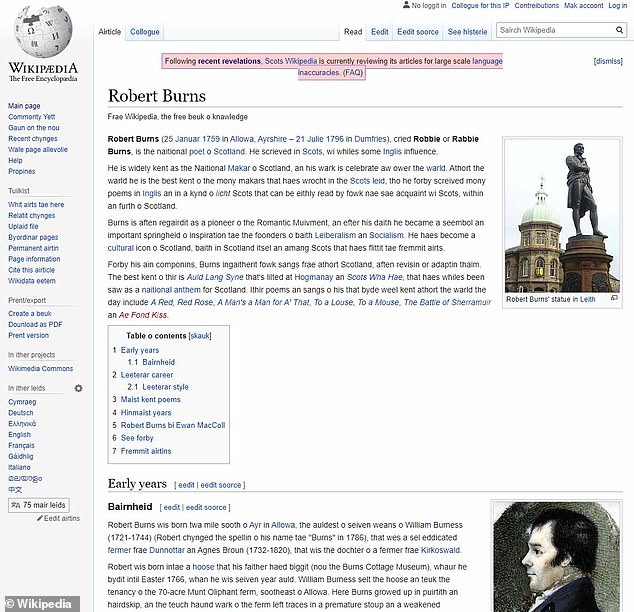 According to MJL, another administrator on Wikipedia, AmaryllisGardener had created or edited 49% of all the articles on the Scots Wikipedia.

They tweeted: ‘Speaking as an admin there, here’s what happened with Scots Wikipedia

‘Nobody cared about maintaining it. Someone stepped up because no one else did. That person was never given any guidance. Articles ended up being very poorly mistranslated.’

AmaryllisGardener – who is from North Carolina in the US – has since responded to the backlash in a statement shared on his own Wikipedia talk page and said he was acting in ‘good faith’.

He wrote:  ‘Honestly, I don’t mind if you revert all of my edits, delete my articles, and ban me from the wiki for good.

‘I’ve already found out that my ‘contributions’ have angered countless people, and to me that’s all the devastation I can be given, after years of my thinking I was doing good (and yes, obsessively editing).

‘I was only a 12-year-old kid when I started, and sometimes when you start something young, you can’t see that the habit you’ve developed is unhealthy and unhelpful as you get older.

‘Whether peace can be achieved by scowiki being kept like it is or extensively reformed to wipe my influence from it makes no difference to me now that I know that I’ve done no good anyway.’

A Facebook group has since been set up where dedicated Scots speakers are teaming up to overhaul the Scots Wikipedia in a bid to create a reliable and accurate resource for Scots enthusiasts.

The group – simply called Scots Wikipedia Editors – are urging other native Scots speakers to get involved.