House prices are holding steady despite Brexit turmoil and homeowners putting their moves on hold, according to Britain’s biggest mortgage lender.

The bank said that a shortage of properties coming to the market – as homeowners decide to stay put rather than move – was supporting house prices in the face of political uncertainty.

Mortgage rates have also fallen over the past year, while wage inflation has climbed to 3 per cent – and although home movers are reluctant to act, first-time buyer numbers remain strong.

While house prices continue to rise, property inflation has fallen away in recent months on Halifax’s house price index, which has consistently recorded higher growth than rivals this year.

The index is based on Britain’s biggest lender’s mortgage approvals data.

Russell Galley, of Halifax, said: ‘While ongoing economic uncertainty continues to weigh on consumer sentiment – with evidence of both buyers and sellers exercising some caution – a number of important underlying factors such as affordability and employment remain strong.

‘Although the housing market will undoubtedly be influenced by events in the wider economy, it continues to show a degree of resilience for the time being.

‘We should also not lose sight of the fact that the single biggest driver of both prices and activity over the longer-term remains the dearth of available properties to meet demand from buyers.’

The number of homes being put up for sale has steadily declined in recent years, according to the Royal Institution of Chartered Surveyors barometer survey

The headline house price figures mask a fragmented property market across the UK, in which homes in London and the South East have got cheaper, but major regional cities and parts of the North are seeing house prices rise.

Estate agents and analysts suggest that the London property market has started to pick up in recent months, as sellers have become more realistic in their expectations and put their homes up for sale at lower prices, with buyers taking advantage of the soft market.

Lower mortgage rates have also helped boost buying power, although raising the sizeable deposit needed to buy remains very tough without help from the Bank of Mum and Dad. 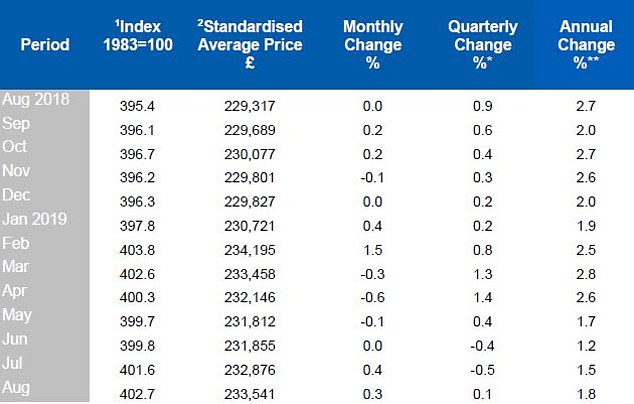 The average home costs £4,224 more than a year ago, says Halifax, but is £654 cheaper than it was in February this year

Jeremy Leaf, a north London estate agent and former RICS residential chairman, said: ‘What we are seeing on the ground is a little more enthusiasm from buyers and sellers returning from holiday and finding they can put off making the necessary changes in their accommodation no longer.

‘Realistic buyers and sellers are also taking advantage of improved affordability and low mortgage rates but we are finding that it is only those prepared to negotiate hard who are successful.’

Analysts are divided on whether the prospect of a cut to stamp duty will stall or boost sales of more expensive homes before a Budget is announced, as some buyers may decide to wait in hope their tax bill will be reduced but others may decide that it is better to get an offer accepted now at a lower price, as a tax cut would boost the market.

Those who are buying can pick up a good deal while the market remains subdued, suggested Mark Harris, chief executive of mortgage broker SPF Private Clients.

He said: ‘Transactions remain fairly steady as those buyers and sellers who have to get on with things continue to do so. Deals are being done and early signs are that business could be brisk this autumn even as Westminster continues to argue over Brexit.’

A separate report today from property website Zoopla highlighted the increasing importance of first-time buyers in recent years, as their numbers finally revive after the post financial crisis years.

It said: ‘In recent years, first time buyers have been the driving force behind housing sales. First-time buyer numbers have grown for eight consecutive years, up 85 per cent since 2010, outpacing other buyer groups

It said that new homeowners were the largest purchaser group in 2018, accounting for 36 per cent of sales and half of all mortgages for home purchase and it expected this to be the same this year.

Mike Scott, chief property analyst at estate agent Yopa, said: ‘There is no sign of any sustained fall in house prices on the horizon. Mortgage approvals remain strong, and HMRC’s gloomy provisional figures for the numbers of homes sold in May and June have now been revised upwards as more returns have been received for those months.’