Property prices have fallen for the third month in a row in May as coronavirus stalled activity in the market, a housing report shows.

However, the decline has been modest, with just a 0.2 per cent monthly downturn in values, according to the Halifax index.

The fall took the average house price in Britain to £237,808, the lender said – this is 2.6 per cent higher when compared with the same time a year ago.

Russell Galley, managing director at Halifax, says calculating the average house price ‘remains challenging’ with increased volatility to be expected, thanks to a limited number of transactions to base data on.

House prices have fallen for the third month in a row in May, new research has revealed

He adds: ‘This is the third successive monthly fall, though more modest than in April, and reflects a continued loss of momentum following what was a strong start to the year.’

The property market has been affected by the lockdown as estate agents were unable to physically show potential buyers around homes and instead rely on virtual viewings.

Halifax’s research differs to that of Nationwide’s house price index released earlier this week that said property values fell by 1.7 per cent month-on-month – or more than £4,000 – in May.

Nationwide claimed this was the biggest monthly fall in property values in 11 years.

However, according to Halifax’s index, the average month-on-month price fall in May was just £506.

Jeremy Leaf, north London estate agent and a former RICS residential chairman, said: ‘Unlike the rather gloomy Nationwide figures from a few days ago, Halifax demonstrates a more hopeful picture for the market, even though prices have fallen for three successive months while emerging from the eye of the Covid storm.

‘On the ground, activity has certainly picked up from its very low base with many of the pre-lockdown sales put on hold resuming, albeit cautiously as buyers and sellers come to terms with the new normal. 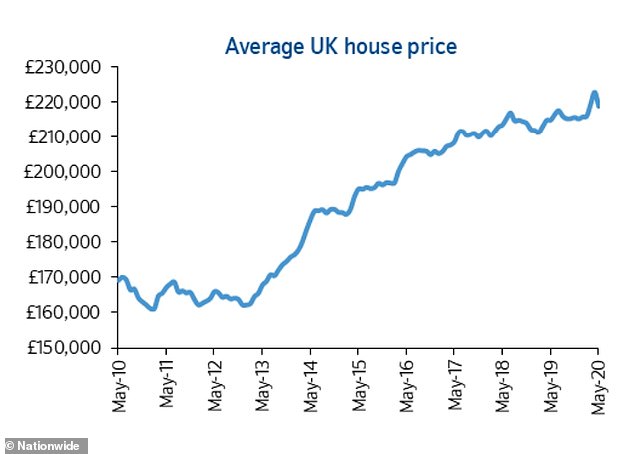 On 12 May, the housing market in England was finally given the green light to reopen after seven weeks in lockdown.

Galley said that the slight easing of lockdown restrictions provided some much needed positive news for the property market as estate agents were allowed to reopen once again.

He added: ‘This is likely to provide a short-term boost as buyers and homeowners attempt to kickstart transactions that had previously been put on hold.

‘Looking ahead, we expect market activity to increase progressively as restrictions are eased further across the whole of the UK and we continue to have confidence in the underlying health of the housing market over the long term.

‘However, the extent of downward pressure on market confidence and prices over the coming months will depend on how quickly the economy is able to recover from the effects of the pandemic and the available Government policy support for jobs and households.’

This week, the Financial Conduct Authority announced that the deadline for mortgage payment holiday applications had been extended by three months until 31 October.

Christopher Woolard, Interim Chief Executive at the FCA, said: ‘The measures we have confirmed today will mean anyone who needs to can get help from their lender, if they are still struggling to pay their mortgage due to coronavirus.

‘It is important that if a consumer can afford to re-start mortgage payments, it is in their best interests to do so. Customers should talk to their firm about the best option available for them.’

Lenders will have communicate with customers regarding what happens when their payment holiday ends.

‘They should offer a range of options for how the missed payments will be repaid, if they are able to resume payments’, the FCA said.

However, some experts say that Halifax’s figures don’t show the whole story.

Mark Harris, chief executive of mortgage broker SPF Private Clients, said: ‘House prices are of limited value when measuring the health of the housing market and this is particularly true when so few transactions are skewing the results.

‘What we do know with certainty is that lenders are relaxing restrictions they introduced at the start of lockdown as they shifted focus to payment holidays and dealing with staff working from home.

‘Loan-to-values are rising back to pre-Covid levels as surveyors return to physical valuations and mortgage rates are falling ever lower as lenders compete for business. For those who are fed up waiting and want to get on and move, there are some excellent deals available.’

Mike Scott, Yopa’s Chief Property Analyst, added: ‘This month’s report is based on a relatively small number of mortgage approvals, due to the effects of the pandemic and the lockdown, and so we must expect the figures to be more volatile than usual. 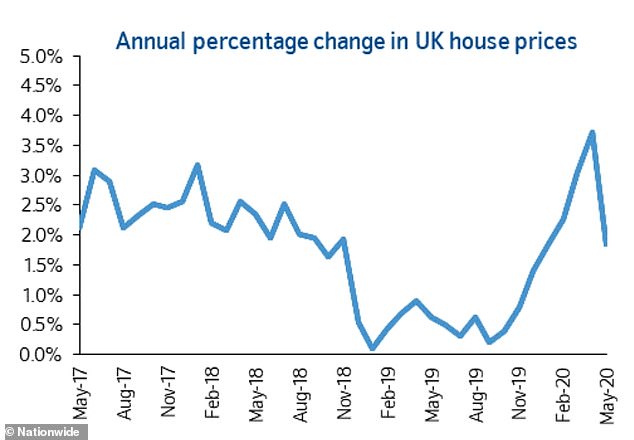 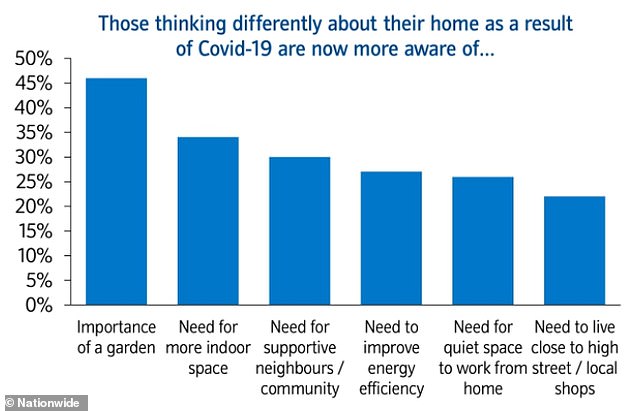 He adds: ‘The fundamentals of the housing market were strong before the lockdown began, but the size and speed of the recovery that is now beginning will depend on the effect of the lockdown on unemployment levels, consumer confidence, and the availability of mortgages, particularly first-time-buyer mortgages lending a high proportion of the purchase price and so requiring relatively small deposits.’

The last couple of months have painted a bleak picture for the property market with the Bank of England revealing that mortgage approvals fell in April.

Its figures showed that the number approved to finance house purchases was 15,848 in April 2020 – representing a 72 per cent month on month fall from March.

Figures from HM Revenue & Customs in April also showed that sales of residential homes fell to the lowest level since records began in 2005.

There were just 38,060 transactions completed in April – less than half the number seen at the same point a year ago.

This further demonstrates the effect coronavirus and lockdown has had on the property market over the last few months.

Prior to the lockdown, house prices were showing signs of stable growth, according to figures released jointly by the Office of National Statistics and the Land Registry.

House price inflation in London before lockdown also reached its highest level since December 2016, with prices in the capital increasing by 4.7 per cent to reach £486,000 on average.