Hall of Fame basketball coach Rick Pitino is prepared to sign with Greece’s Panathinaikos, a EuroLeague power that could help the 66-year old reach his goal of returning to the NBA.

According to Adrian Wojnarowski of ESPN, a formal agreement will soon be signed, and Pitino is expected to begin coaching shortly after Christmas through the remainder of the season, which is significant because it would allow him to sign an NBA deal before next season if he’s given an offer.

Pitino was fired at the University of Louisville in 2017 after he and the school were implicated in the federal investigation into bribery and corruption within college basketball recruiting circles. Pitino has maintained his innocence, but according to an indictment that was unsealed in November of 2017, he allegedly did have knowledge and directed payments to potential recruits. 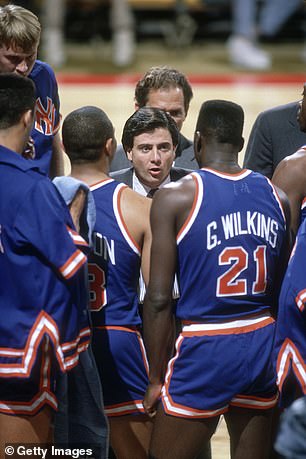 Now on his way to Greece, Pitino caught a recent game between the Miami Heat and New York Knicks, the latter of whom he guided to the NBA playoffs in 1988 and 1989 (right) 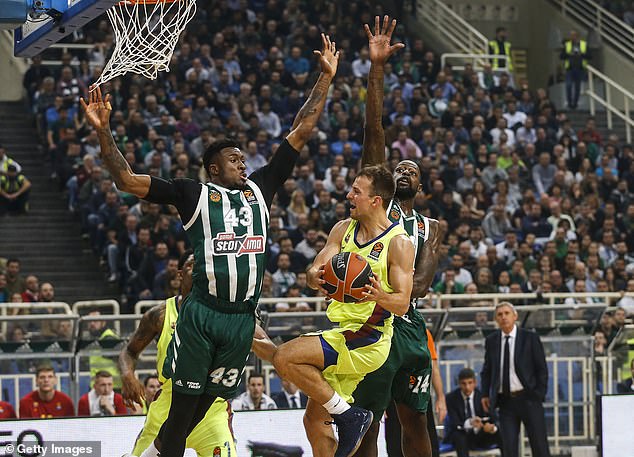 Pitino, who won national titles as the head coach of the Cardinals and the Kentucky Wildcats, had publicly discussed retirement during a book tour in September. However, as he told ESPN in October, Pitino hopes to get up to speed on the NBA and wants to coach in the league for a third time.

‘I just want to be a part of an organization,’ Pitino told ESPN. ‘I want to develop young players. I want to be part of a team. I miss it terribly. I’m using this time to really study the NBA. If something opens up with a young basketball team, I’d have deep interest in it.

‘I think the league is going to get younger and player development will become even more important to every organization. That’s my forte. I believe I can help an organization find a pathway to success.’ 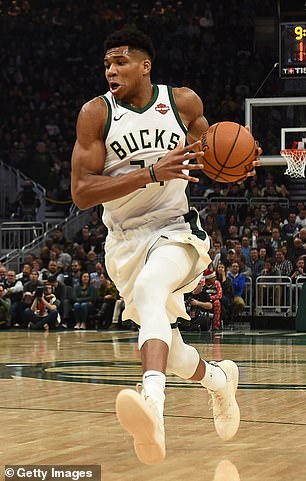 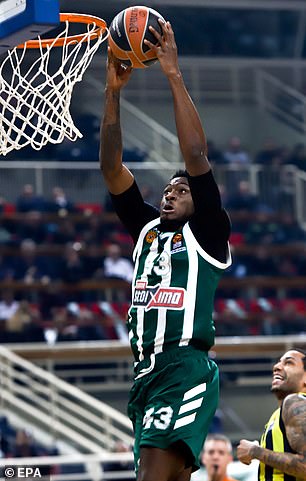 While Giannis Antetokounmpo (left) stars in the NBA, his brother Thanasis (right) will hope to join him with the help of new Panathinaikos coach Rick Pitino 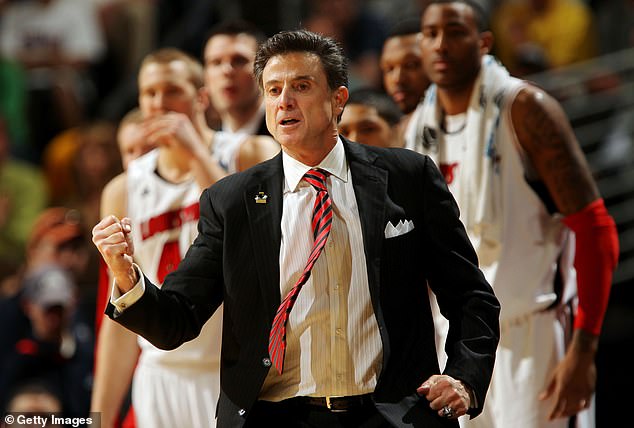 Pitino, 66, was fired during an FBI probe into a recruiting scandal involving Adidas executives. It was one of multiple scandals around the program during Pitino’s tenure at Louisville

Panathinaikos is a high-profile team in Greece, and it currently employs forward Thanasis Antetokounmpo, who is the older brother of Milwaukee Bucks sensation Giannis. Other former NBA players on the Panathinaikos roster include Nick Calathes, Georgios Papagiannis, and Keith Langford.

According to ESPN Panathinaikos owner Dimitrios Giannakopoulos is known for his temper, and was once fined $150,000 in 2015 for threatening to kill officials and their families following a EuroLeague win over CSKA Moscow.

Pitino guided the New York Knicks to the playoffs in 1988 and 1989 before leaving for Kentucky, but a following stint as head coach and President of the Boston Celtics resulted in his resignation during the 2000-2001 season. 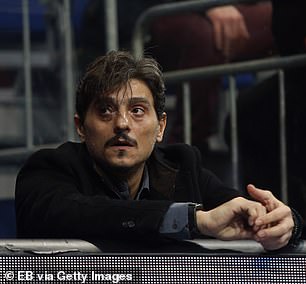 Panathinaikos owner Dimitrios Giannakopoulos is known for his temper, and was fined $150,000 in 2015 for threatening to kill officials and their families following a EuroLeague win over CSKA Moscow

He went 102-146 in Boston, where he was handed personnel control and the title of team president. However, as he told ESPN, Pitino would not insist on a front-office role if he were to negotiate with an NBA team.

‘I’m not looking for any of that at this stage of my life,’ Pitino told ESPN. ‘I want to develop teams and develop players and build a winner. I value analytics. I want to fit into an organization. At this stage, that’s all I’m interested in.’

Pitino’s tenure in Boston was defined by his preference for players who had played for him at Kentucky – such as Tony Delk, Walter McCarty, Ron Mercer, and Antoine Walker – and his ill-faited decision to trade promising young guard Chauncey Billups to Toronto for Kenny Anderson.

Billups went on to be named to five All-Star teams and was named the NBA Finals MVP in 2004 as a member of the Detroit Pistons. 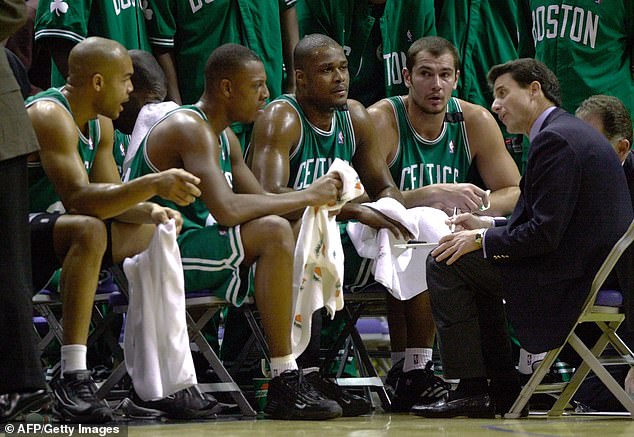 The recruiting scandal was not Pitino’s only problem at Louisville.

In February, the NCAA denied Louisville’s appeal and vacated 123 victories, including its third NCAA title, following a 2015 book by escort Katina Powell, who claimed that former basketball staffer Andre McGee hired her and other dancers for sex parties. Louisville removed the championship banner from its home arena soon after the NCAA’s verdict.

Several investigations soon followed after Powell’s allegations, including ones by the school and the NCAA. Louisville’s own investigation found that violations did occur and imposed penalties including sitting out the 2016 postseason in an effort to mitigate NCAA penalties. 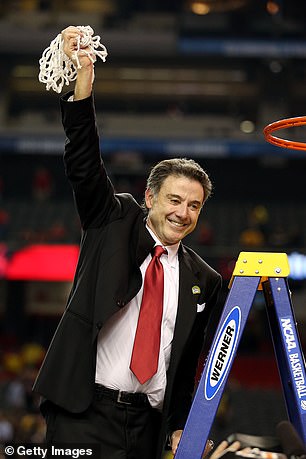 The NCAA in June 2017 first ordered Louisville to vacate victories that included the championship and Final Four appearance for activities it described as ‘repugnant’ in its decision. Pitino was suspended for five games for failing to monitor McGee. The school and the coach vowed then to fight the penalties.

As for the federal investigation into corruption within college basketball circles, Pitino was not named in the complaint and has denied knowledge of any payments made to the family of former Louisville recruit Brian Bowen, one of the players mentioned in the court filing.

The coach is suing the school along with sportswear maker Adidas, which dropped him after his firing. The two-time national champion coach had around $38.7 million remaining (nine years at $4.3 million a season) on his contract when he was fired ‘for cause’ on October 16 in a unanimous vote by the ULAA.

Pitino’s lawyers argue there is nothing in a federal criminal complaint unsealed in September that ties Pitino to any improper activities. 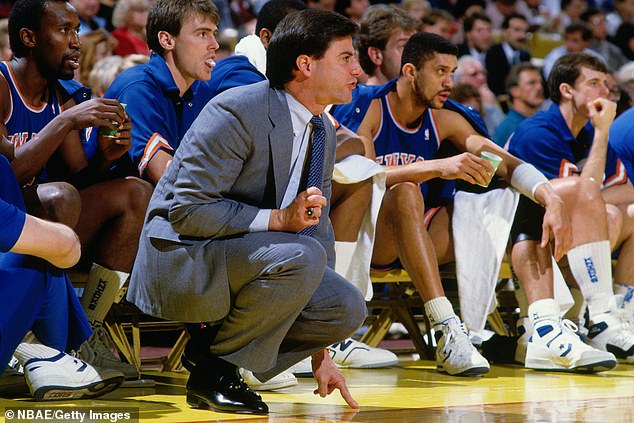