Halloween increases risk of pedestrian deaths by 43%: Kids are 10 times more likely to be run over

Children are 10 times more likely to be killed by a car on Halloween than on any other day of the year, a new study has found.

Researchers say the risk of pedestrian deaths on Halloween spiked by 43 percent compared to one week earlier or one week later.

The risk was most serious for children between ages four and eight, who were 10 times more likely to be struck by a vehicle on the holiday.

The team, from the University of British Columbia in Canada, says that Halloween has become such a big holiday that they’re advising some neighborhoods become car-free to keep trick-or-treaters and party goers safe.

Children between ages four and eight are 10 times more likely to be struck by a vehicle on Halloween compared to one week earlier or one week later, a new study says (file image)

For the study, the team gathered data on all fatal traffic crashes in the US between 1975 and 2016 from the National Highway Traffic Safety Administration (NHTSA).

First, they looked at the number of recorded pedestrian fatalities between 5pm and midnight on Halloween.

Then the researchers compared those figures to the number recorded during the same hours one week earlier and one week later.

They found that, on average, there were four additional pedestrian deaths on Halloween – with almost all occurring among children or young adults.

The most dangerous time for Halloween revelers was between 5pm and 8pm.

Co-investigator Candace Yip, an undergraduate student at the University of British Columbia, said the study is evidence that pedestrian safety needs improvement not just on the holiday but throughout the year.

‘Our findings suggest there are opportunities to improve pedestrian safety on Halloween, but they also highlight ways that traffic safety might be improved on the other 364 days of the year,’ she said.

Lead researcher Dr John Staples said the study was not able to determine exactly why there is a rise in accidents but said it is likely a ‘combination of dark costumes, excitement and alcohol’.

Data from NHTSA shows that between 2012 and 2016, 44 percent of all people killed in car crashes on Halloween night had an accident involving a drunk driver.

The team said one way to lower the number of fatalities is to make some neighborhoods car-free. 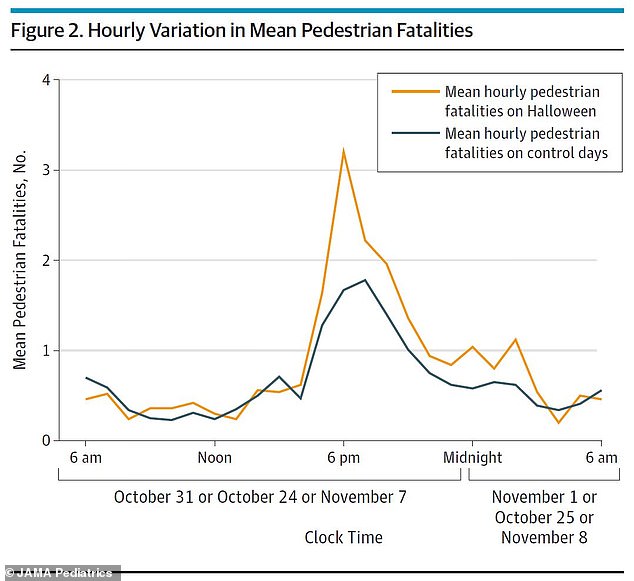 They also suggest parents talk to their children about how to cross the street safely and supervise younger children while trick-or-treating.

AAA (American Automobile Association) says that Halloween is one the top three days of the year for pedestrian injuries and fatalities.

Tips published on the organization’s website include having parents make sure their children’s clothes are light in color to improve visibility and to carry some form of light – but not to flash it into the eyes of drivers.

The risk is not limited to the US. In the UK, traffic accidents increased by 75 percent on Halloween compared to the rest of October, according to an analysis by Churchill Car Insurance.

The analysis also found that an average of 49 child pedestrians are struck by vehicles on Halloween, nearly twice the average number compared to the to weeks before and two weeks after.