The streets of Britain were awash with fake blood last night as young revellers dressed up as gruesome versions of their favourite fancy dress icons – but they are probably feeling a bit frightful this morning.

With Halloween falling on a Tuesday this year, yesterday evening saw the beginning of celebrations, as young party-goers took over the country’s city centres.

In Newcastle festivities got off to a chilly start with night time temperatures of just seven degrees and young women scantily clad in their best gruesome get-up.

In Newcastle these female party-goers, painted head to toe in orange, had a chilly start to their evening of spooktacular fun 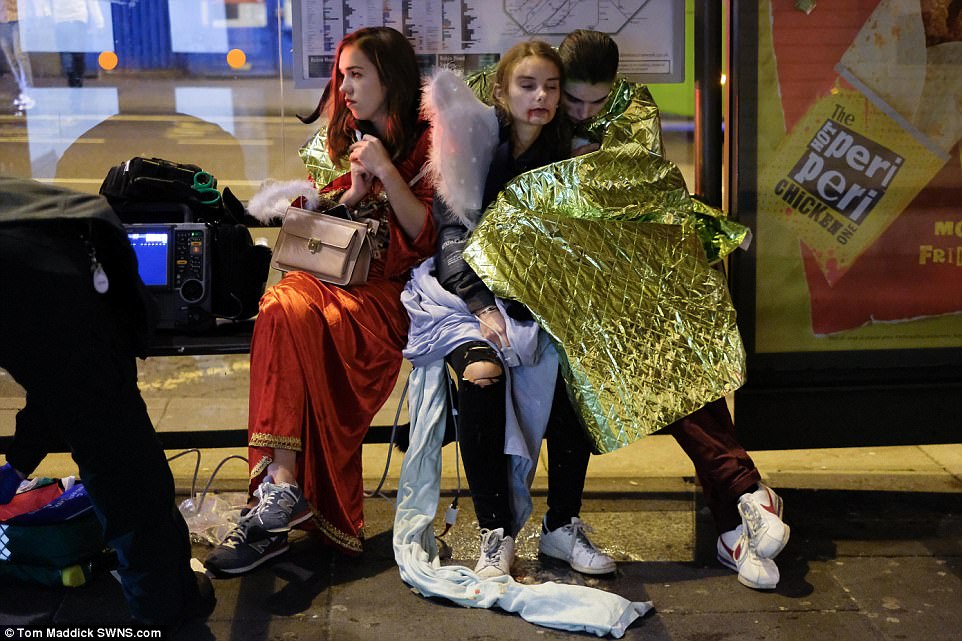 Just short of 200 miles south in Nottingham, it wasn’t much warmer. These Halloween revellers were so cold one (pictured) used their reptilian cloak costume to warm up a female friend 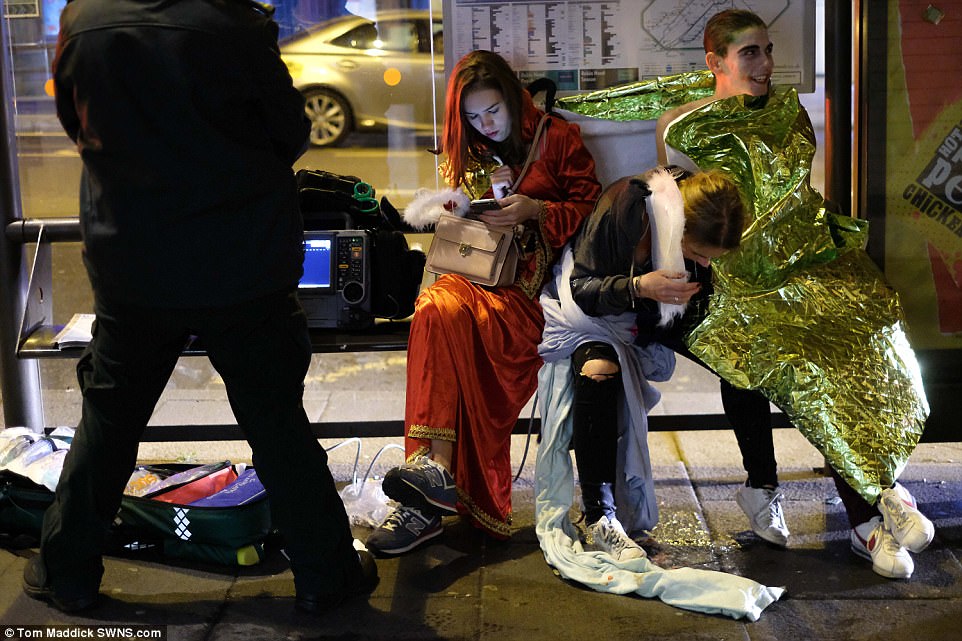 It was a bad start to the night for these Nottingham clubbers, as they sat in a bus stop, which doubled up as a medical bay 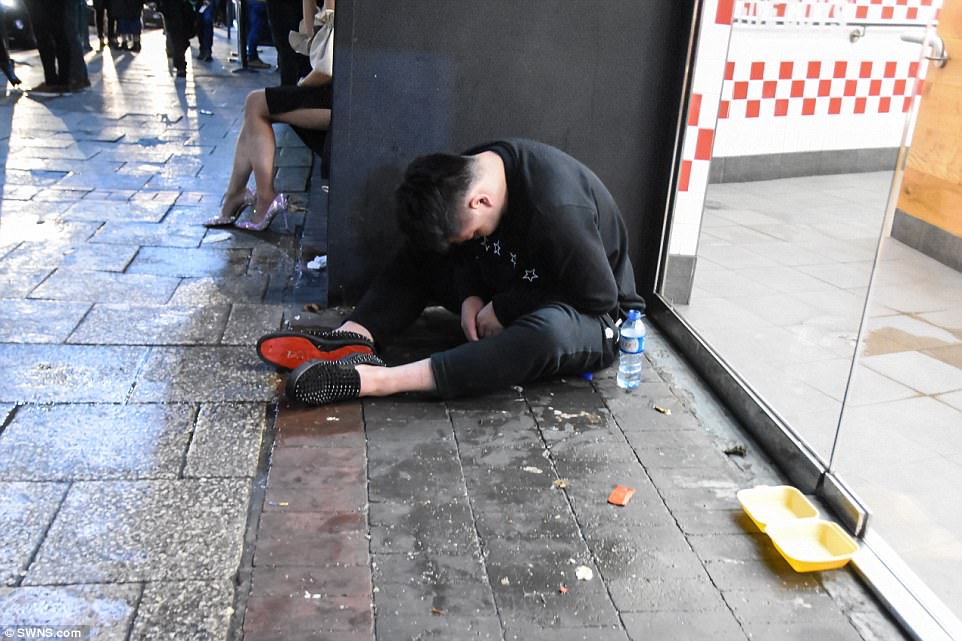 It is not clear who this person was meant to be dressed as, but he was unable to tell anyone doubled over, and slumped outside a fast food takeaway in Broad Street, Birmingham last night 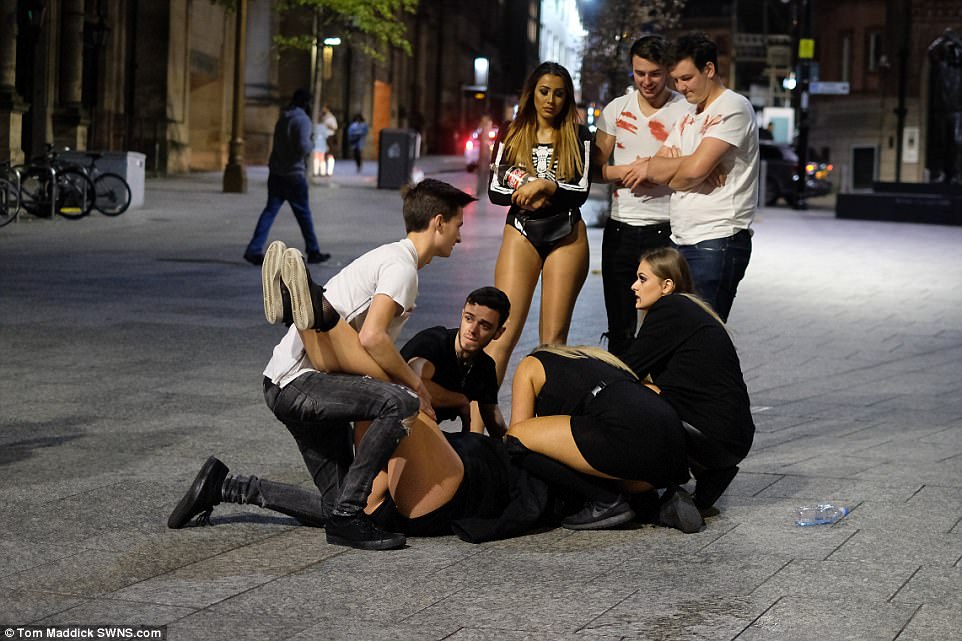 In Nottingham a female party-goer is pictured lying on the floor with her friends holding her legs in the air, presumably after drinking a little too much. She was spotted surrounded by friends wearing blood-stained T-shirts and a scantily-clad skeleton 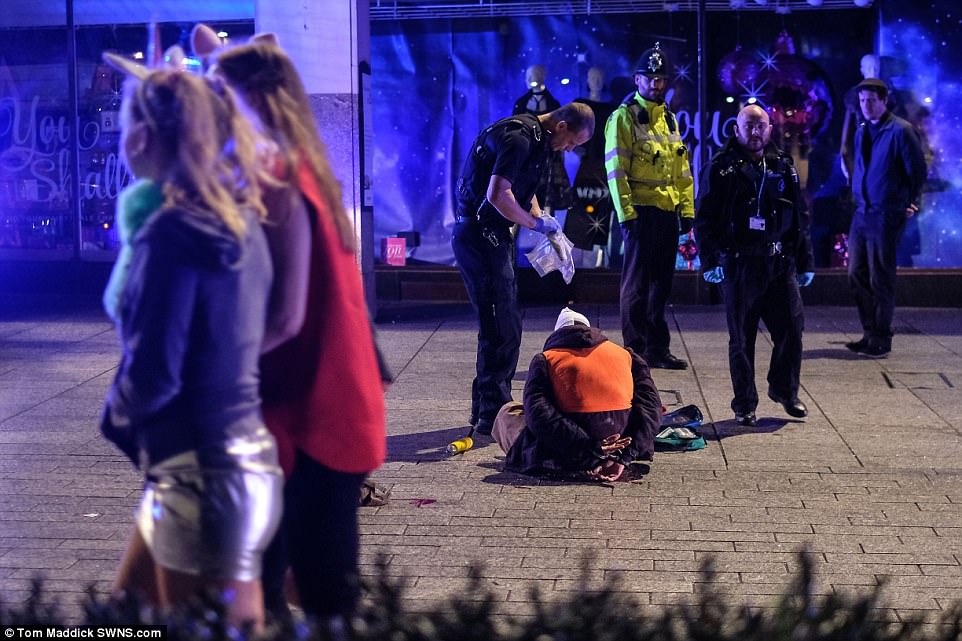 Police and paramedics were seen attending to one man who is pictured slumped on the floor and handcuffed in Nottingham city centre. It is not clear whether the bandage on his head was part of his outfit or whether he had suffered a head injury 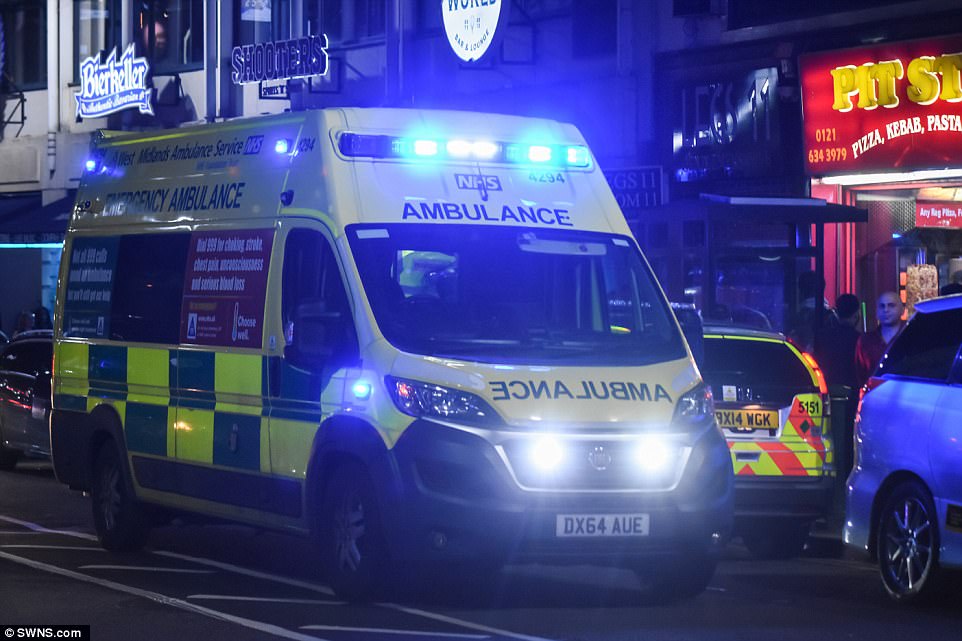 Ambulances patrolled the streets of Birmingham, with the main Broad Street full of drunken revellers on their way to Halloween parties around the city

Crackdown on creepy criminals: Halloween moped ‘ride outs’ to be stamped out by police across the country

Motorcyclists who cause chaos by taking part in so-called Halloween ‘ride outs’ have been warned they will be dealt with ‘robustly’ by police.

Scotland Yard has launched a crackdown on the events, after responding to large groups of bikers engaging in anti-social behaviour for the last two years.

The riders were intent on causing disruption across London by driving recklessly, on the wrong side of the road, through red lights and on pavements, the Metropolitan Police said.

Many of those taking part in the Halloween ‘ride outs’ were also using stolen motorbikes, it added.

Superintendent Tania Coulson said the groups had put themselves and members of the public at risk with their behaviour in the past.

She said: ‘We know that some people may see the event advertised and think they are joining like-minded enthusiasts on a lawful ride. This is not the case. They drive ruthlessly and carry out stunts on the road.

‘Officers will be out across London throughout the Halloween period and will deploy a number of police tactics to prevent riders from driving dangerously.

We intend to prevent disorder and crime caused by riders and we will be dealing robustly with offenders. Any groups or individuals who cause disruption will be arrested.’

The Metropolitan Police said it was aware that many individuals taking part in the ‘ride outs’ were linked to the group ‘UK Bike Life’.

Last year, several people were arrested after more than 200 motorcyclists gathered for a ‘Halloween ride-out’ in Solihull and Birmingham.

At one point up to 100 masked bikers surrounded a police van in Yorkminster Drive in Chelmsley Wood, while the fire service also reported that a group had attempted to stop them from responding to an emergency call.

In Leeds a group of around 50 racing off-road motorcycles and quad bikes brought a busy road to a standstill, as part of an event believed to be organised on social media.

Some were spotted painted head to toe in orange, while others opted for sexy versions of the Chainsaw Massacre.

It was a dark night in the centre of Nottingham, with things starting out on a bad food for a group of drunk clubbers who had to be dealt with by the police and paramedics.

Some were pictured slumped in a bus stop, which doubled up as a medical bay for paramedics treating those who had a bit too much fun. 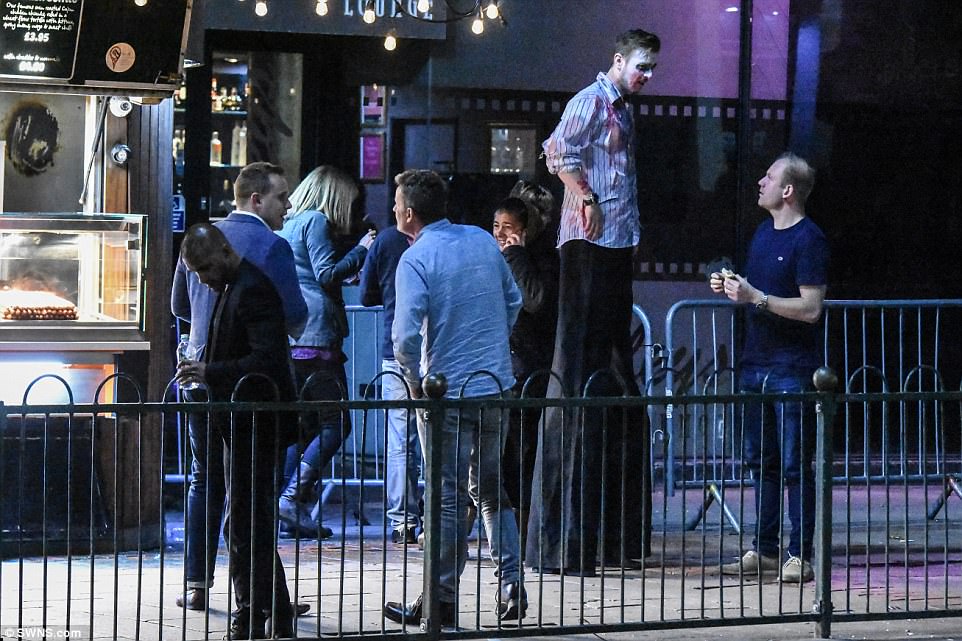 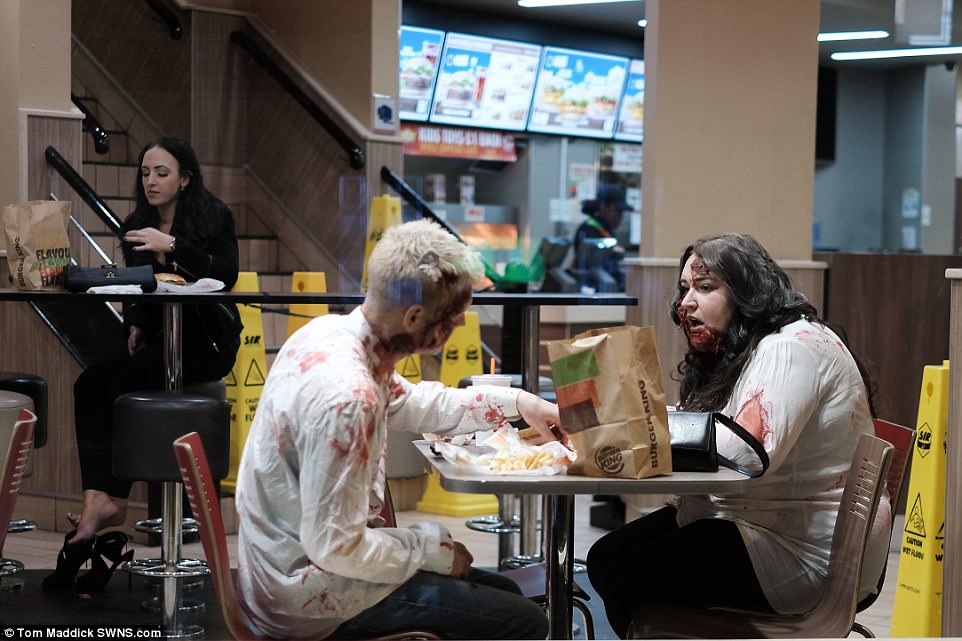 A pair of blood-stained revellers were spotted munching away in Burger King after a tiring Halloween night out in Nottingham. A fellow party-goer not dressed in a festive outfit is spotted in the background without her high heels 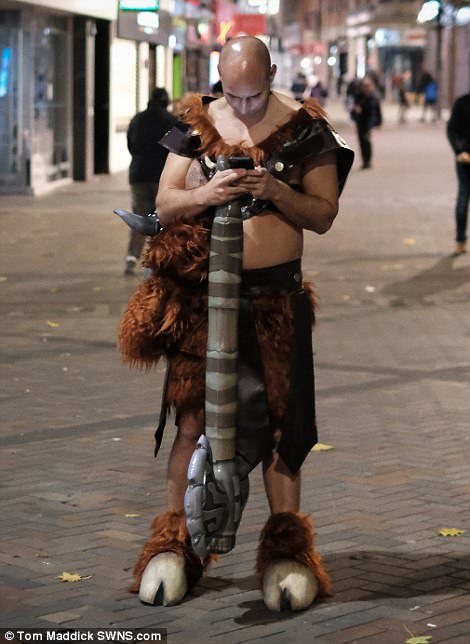 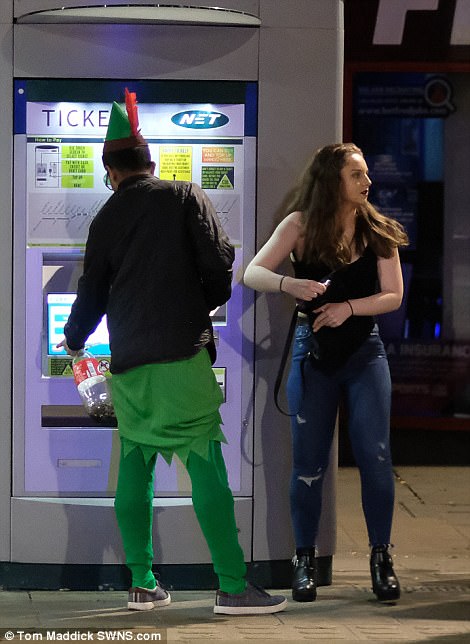 A Halloween party-goer is pictured trying to find his friends on his mobile in Nottingham (left), while a gory Robin Hood gets some cash out down the road

A sexy horror bride and nurse (pictured left) are happy to be photographed in Newcastle, while a clown fails to notice the camera just down the street (pictured right)

One young man was so cold he used his reptilian green cloak as a thermal blanket for a female friend dressed as an anti-Christ style angel.

Others were seen doubled over in the street, surrounded by a group of similarly-dressed friends desperately trying to remedy their heavy drinking.

Ambulances patrolled the streets of Birmingham, anticipating the usual medical mishaps from party-goers who had drank too much. 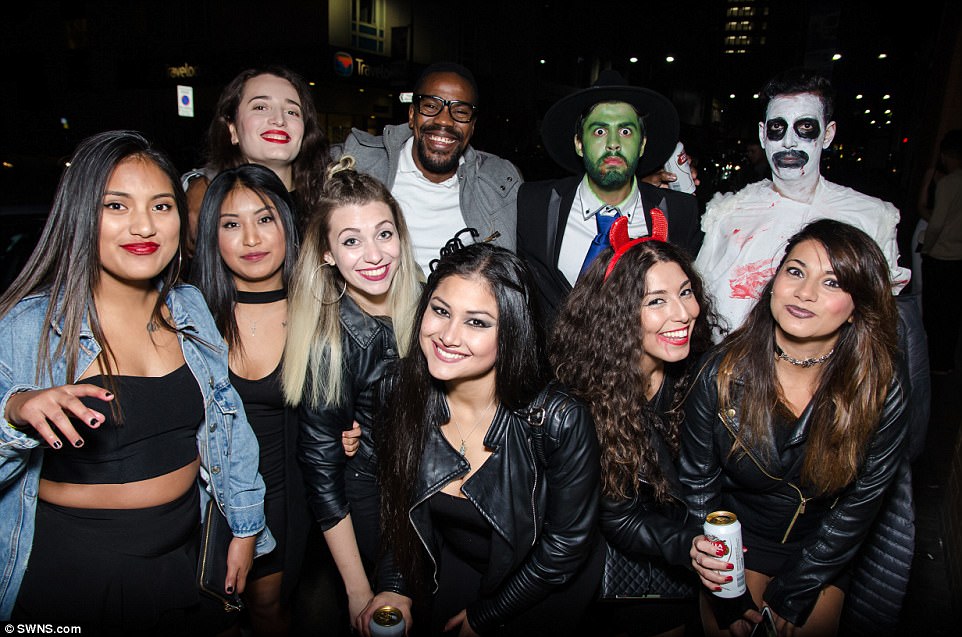 A group of party-goers are pictured at the beginning of their night out in Broad Street, Birmingham. Some are seemingly scarier than others, with several female members of the group not in fancy dress at all 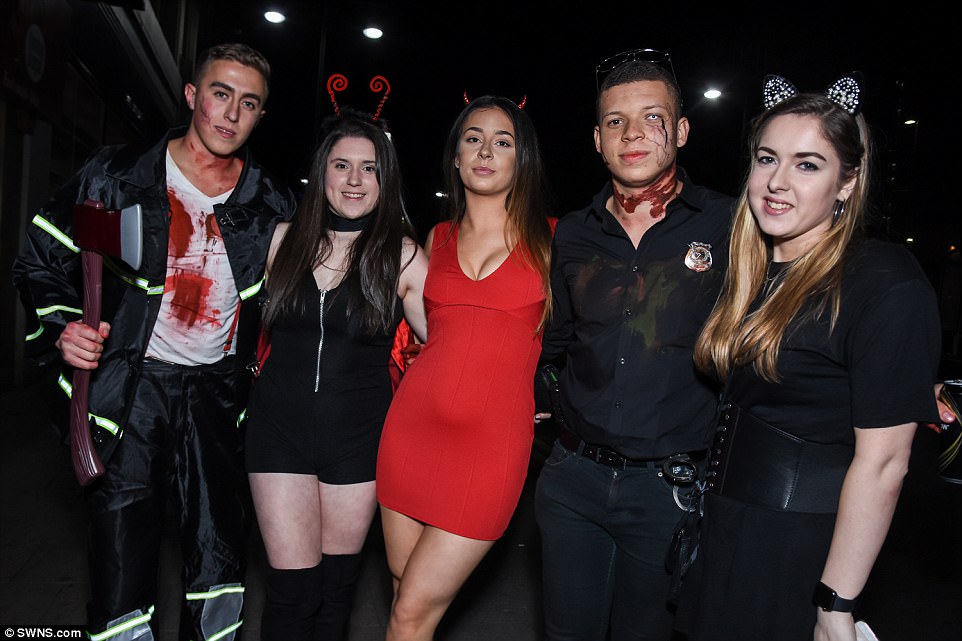 Another group of horror seekers are pictured in Birmingham, one wielding an axe and others sporting less scary accesories 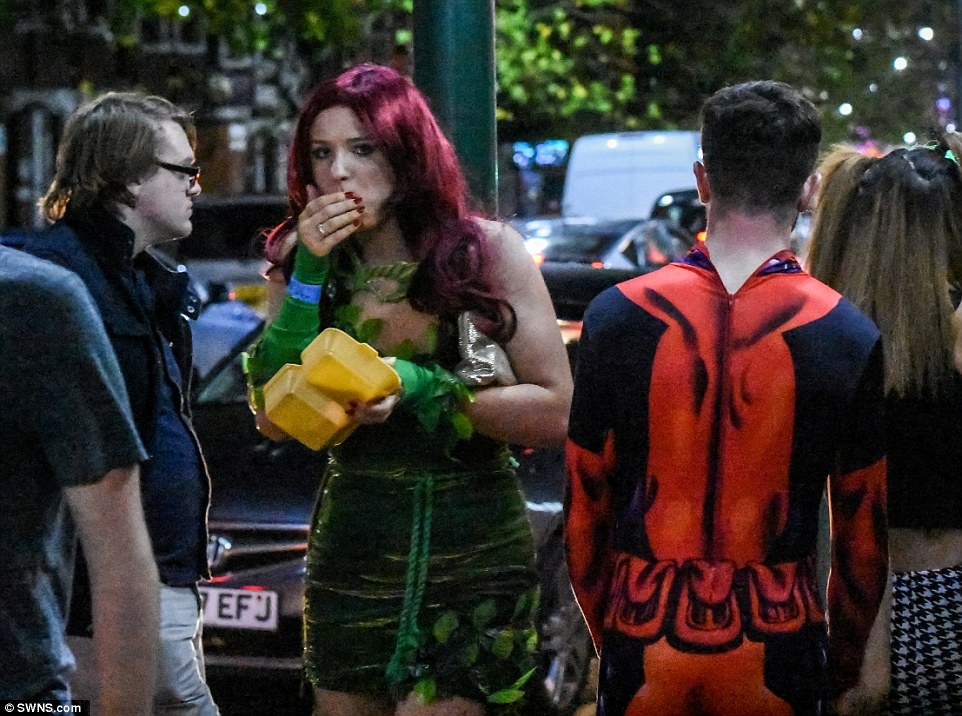 While some groups were pictured impeccably dressed for the occasion, others were unable to crack a smile, slumped on the pavement or in a kebab shop instead.

Skeletons were spotted smoking on benches alongside a pair of gory Geishas.

One of the most impressive outfits was spotted in central Newcastle, where one reveller was dressed as Pennywise from the new It film. 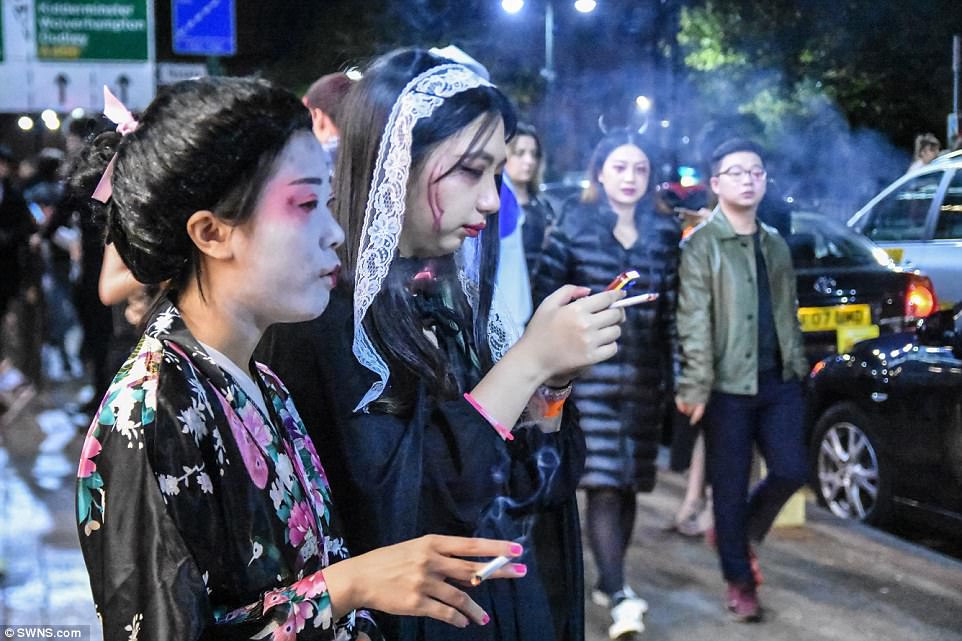 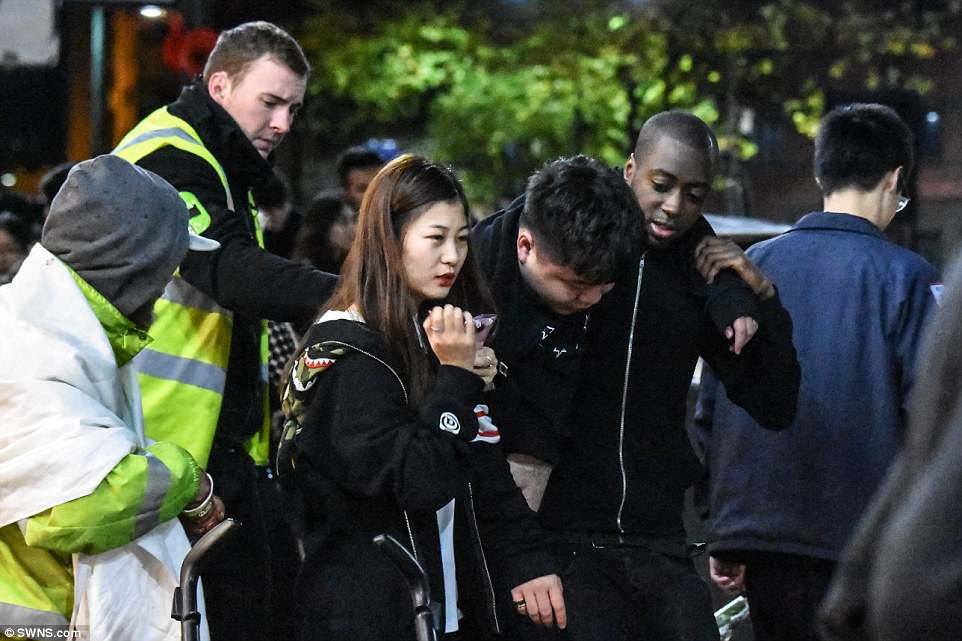 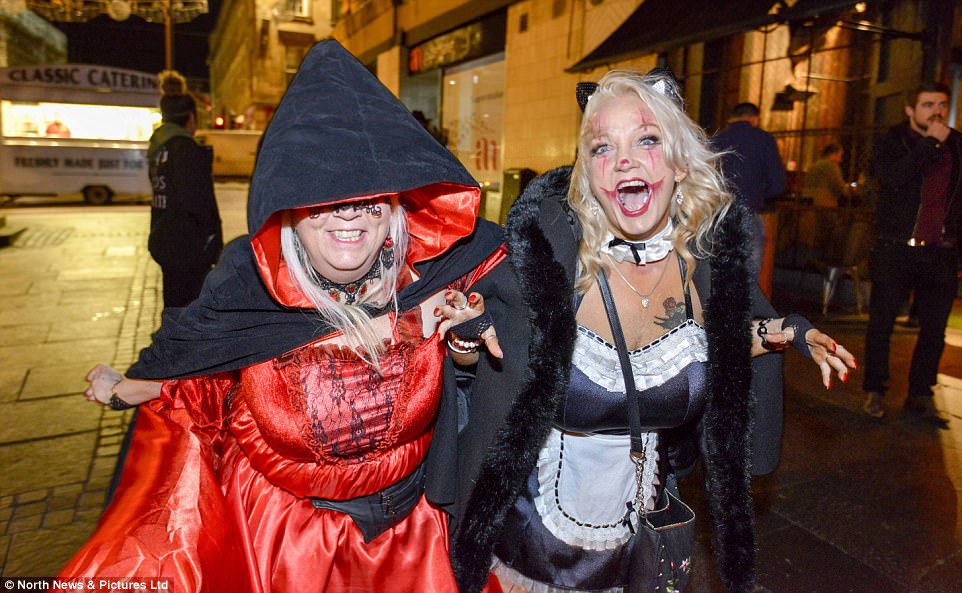 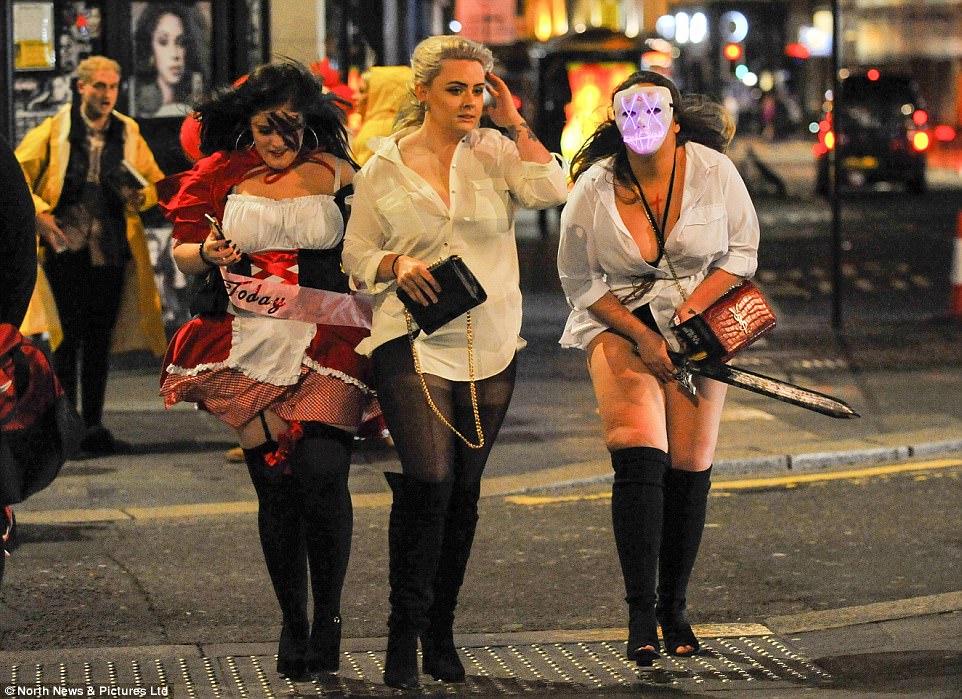 A group of young women dressed in Lederhosen, knee-high black boots and a character from the Chainsaw Massacre crossing the road to get to their Halloween party in Newcastle 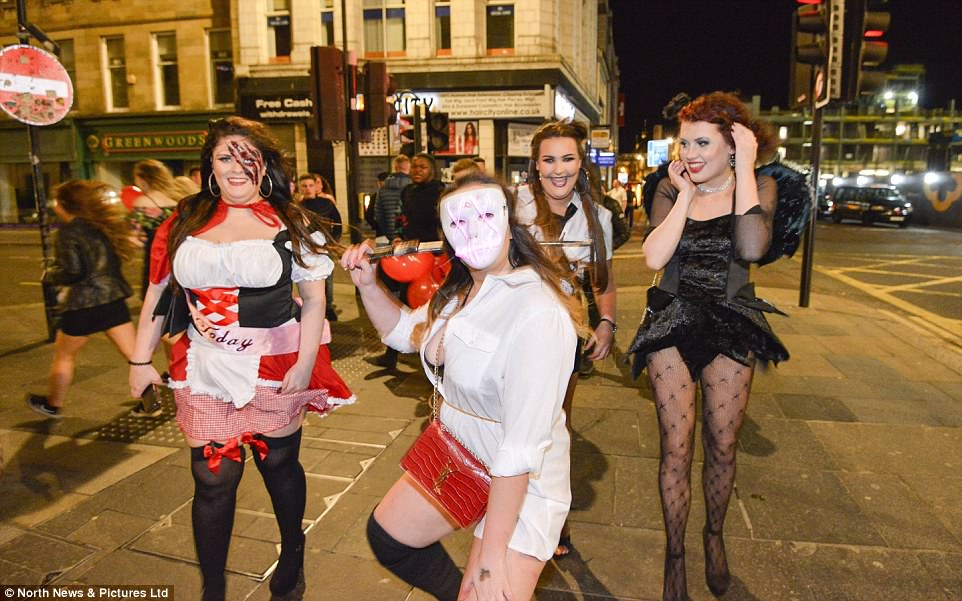 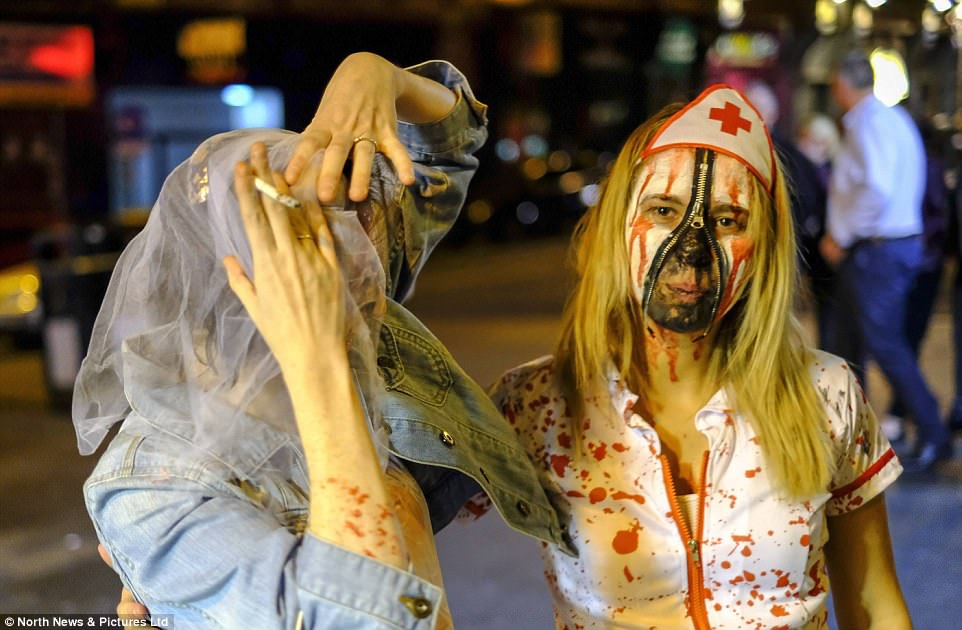 A gory nurse and horror bride are pictured in Newacstle. The bride is pictured adjusting her veil as she holds a cigarette 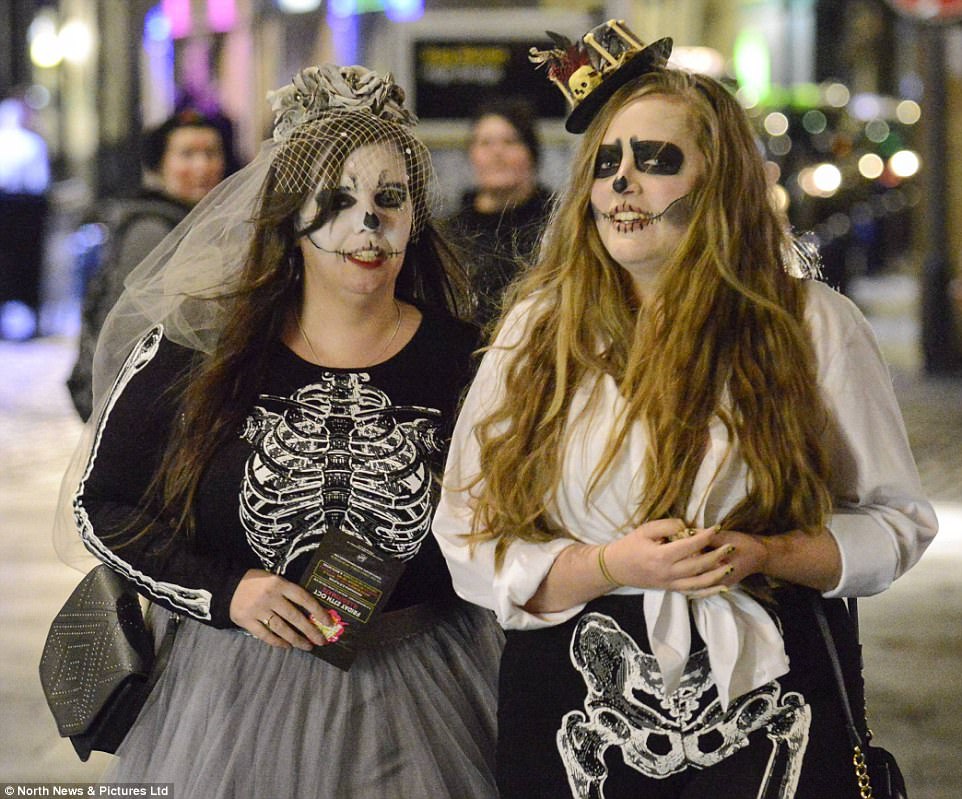 This pair of female skeletons were seen shivering on the streets of Newcastle, clutching a club night flyer as temperatures dropped as low as seven degrees in the north of England 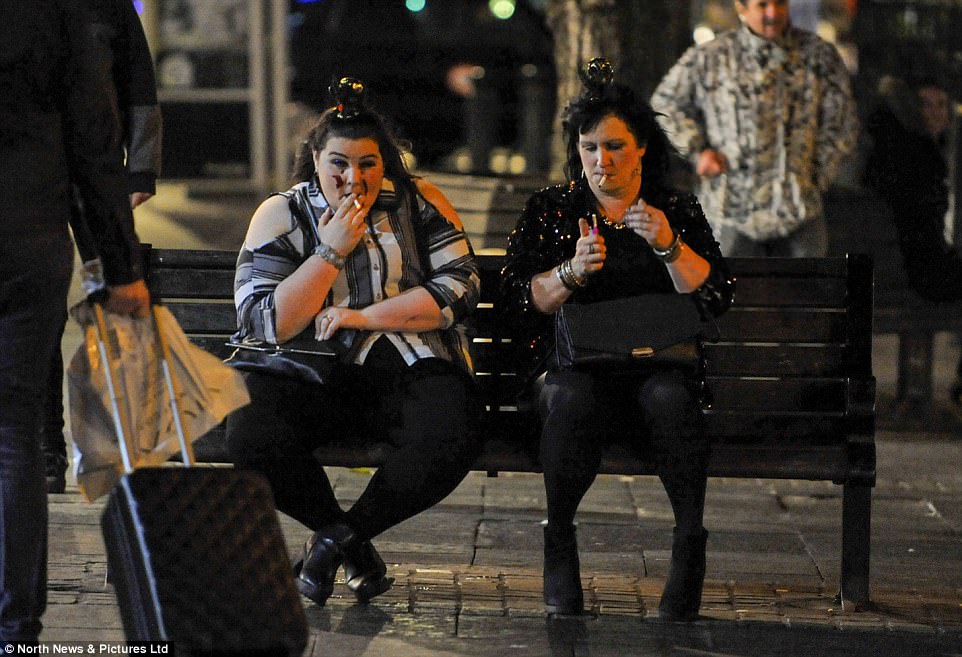