Halting the obesity epidemic will save 10,000 lives over the next 11 years

By Science Correspondent For The Daily Mail

Halting Britain’s obesity epidemic could save almost 10,000 lives in the next decade.

Premature deaths could be cut by 7 per cent by 2030 if the number who are overweight falls. Obesity is the second biggest killer in Europe after smoking. It causes the four major non-infectious diseases – cardiovascular disease, cancer, chronic respiratory disease and diabetes.

These conditions will kill 127,645 people between now and 2030, it is forecast, at an age younger than they should die.

But 9,411 people aged 30 to 70 could be saved if Britain’s annual rise in obesity was halted. If Britain eradicated obesity altogether, more than 40,000 premature deaths would be prevented.

Niels Lund, who led a study on obesity rates presented at the European Congress on Obesity in Glasgow, said: ‘This projection is based on history. We believe it’s a scenario that is likely.’

Mr Lund, from pharmaceutical firm Novo Nordisk, added: ‘If we could just cap obesity at the rate it is today, that would reduce premature mortality by between 5 and 7 per cent. This shows the extent to which obesity affects chronic disease mortality.’

Among British people aged 20 to 69, one in 12 deaths are attributed to obesity.

Researchers used figures from 2000 to 2014 to see how the problem is increasing and make predictions for the future.

Caroline Cerny, from the Obesity Health Alliance, said: ‘Obesity increases the risk of many diseases which not only affect quality of life but can also shorten it. 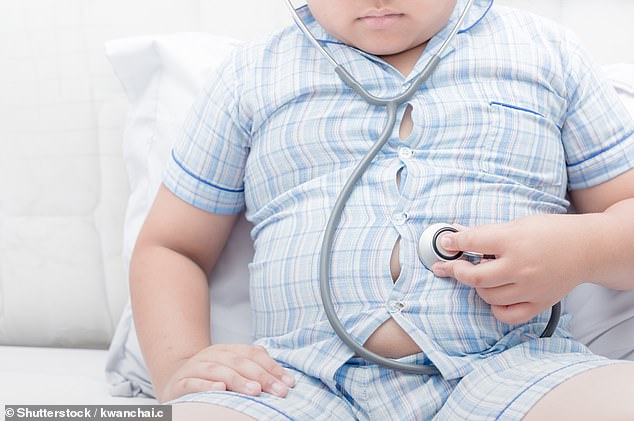 Obesity-related conditions will kill 127,645 people between now and 2030, it is forecast (file photo)

‘That’s why reducing obesity needs sustained commitment from central government to transform our food environment. This will only be achieved with bold and far-reaching policies, including a 9pm watershed on junk food adverts in all media and restricting unhealthy price promotions.’

Tam Fry, chairman of the National Obesity Forum, said: ‘For the past 20 years, the UK has made scarcely a dent in its obesity figures simply because no government has taken obesity reduction as seriously as it should.’