The onion oracle was right! Meet the Aussie farmer who can predict the weather – and his latest forecast was spot on

An Australian farmer known as the onion oracle for his unique method of predicting rainfall was spot on with his forecast for the first two months of the year.

Halwyn ‘Hally’ Herrmann, from Lowood in south-east Queensland, has been predicting rainfall using an onion on New Year’s Eve for the past 62 years.

Although he describes his annual forecast as a ‘little bit of fun’, the 80-year-old’s rain predictions for the first two months of 2020 have been accurate.

Halwyn ‘Hally’ Herrmann, from Lowood in south-east Queensland, has been predicting rainfall using an onion for the last 62 years on New Year’s Eve

‘The first two months are coming good…so far,’ he said as he laughed on The Today Show.

January was predicted to have light rain while February was supposed to see better rain, which Australians have seen over the past week.

Northern NSW and southern Queensland have experienced the ‘wettest week in decades’, according to meteorologists.

The Gold Coast recorded its highest ever monthly rainfall total with about 566mm falling in the first two weeks of the month. The previous monthly record was in December 2010 with 490mm.

NSW received a record-setting rainfall earlier on in the week, with up to 550mm falling across parts of the northern rivers, mid-north coast, Central Coast, Sydney, Blue Mountains and the Illawarra.

The last 62 years has seen an accuracy of 70-80 per cent for Mr Hermann’s predictions.

He accurately forecast the 2011 deluge which saw Queensland flooded, last year’s extreme dry weather, and the first two months of 2020.

Mr Herrmann has predicted rainfall for a third of 2020, with some rain expected in autumn, fairly dry winter and slightly wetter spring.

‘I can’t see any flood rain, but we are getting more than we did last year. March and April looks good for decent rain.’ 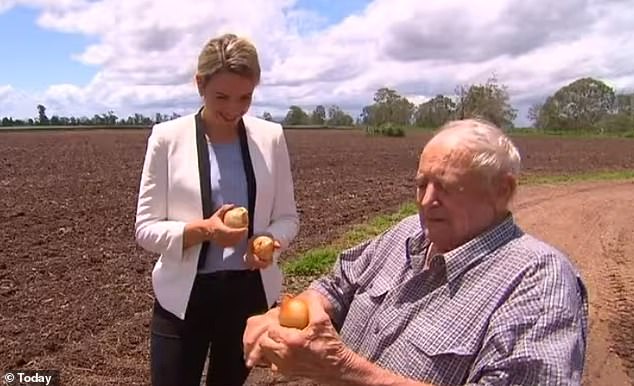 The grandfather was taught the German tradition from his neighbour over tea, beer and wine and he isn’t looking to stop any time soon

The grandfather learned the German tradition from his neighbour over tea, beer and wine and he isn’t looking to stop any time soon.

‘I’ll do it until I die. Because I get enjoyment out of it.’

At midnight on the last day of the year Mr Herrmann peels an onions and then cuts it in half length-wise.

Six onion ring cups are then removed in order from the left, followed by six from the right – one for each month.

Each ring is rubbed with a pinch of salt, and left until 4.30 the next morning when the measuring begins.

Using the naked eye, Mr Herrmann measured the amount of water inside each ring, which predicts how much rain will fall that month.

The more water left inside the shell, the more rain there will be that month, Mr Herrmann said.

To keep the tradition alive, Mr Herrmann is teaching his 19-year-old grandson Luke the technique.

Step 2: At midnight on New Year’s Eve cut the onion lengthwise and let the ring cups fall to the left and right

Step 3: Take the six rings from the left for the months January to June, and the six from the right for July to December

Step 4: Put a pinch of ordinary cooking salt inside each ring and rub it around with one finger

Step 6: Check how much water has gathered inside the onion ring cups using the naked eye

Step 7: Make your predictions based on how much water there is inside each ring – the more water the more rain will fall during that month