Hamilton Sydney: Everything you need to know about the musical stage show taking the world by storm

Sydney is the only city in the world where you can currently see the smash stage show Hamilton, which opened in front of a star-studded audience on Saturday.

The roll-call of big names at the premiere was as impressive as any in recent memory in Australia – including high-profile politicians, Ros and Gretel Packer, Delta Goodrem and Keith Urban – just to name a few.

The hype wasn’t just confined to Australia’s rich and famous either – Hamilton is believed to have sold more tickets than any stage show in the country’s history. 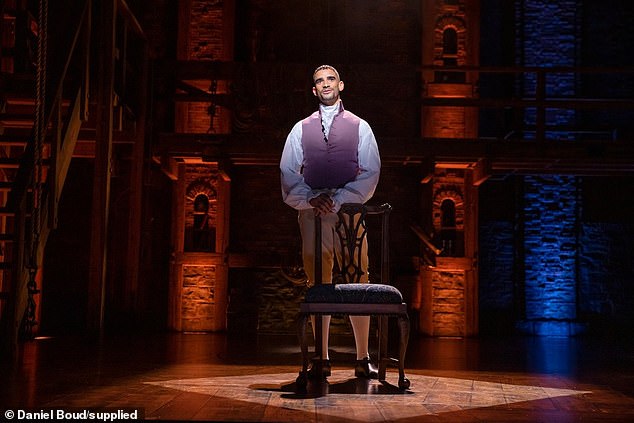 Lyndon Watts, as Aaron Burr, was one the stand-outs of an excellent Australian cast of Hamilton

‘We’re not just confident [that audiences will see the show], we are sure of it because we know how many tickets we have sold,’ Hamilton’s American producer Jeffrey Seller told a Nine newspapers podcast.

‘It’s the largest advance in the history of Australia.’

That means 250,000 tickets have already been sold in Australia, worth over $40 million.

So is it worth joining those who have bought into the Hamilton hype?

If you’re keen to find out, here’s everything you need to know about the global theatre phenomenon. 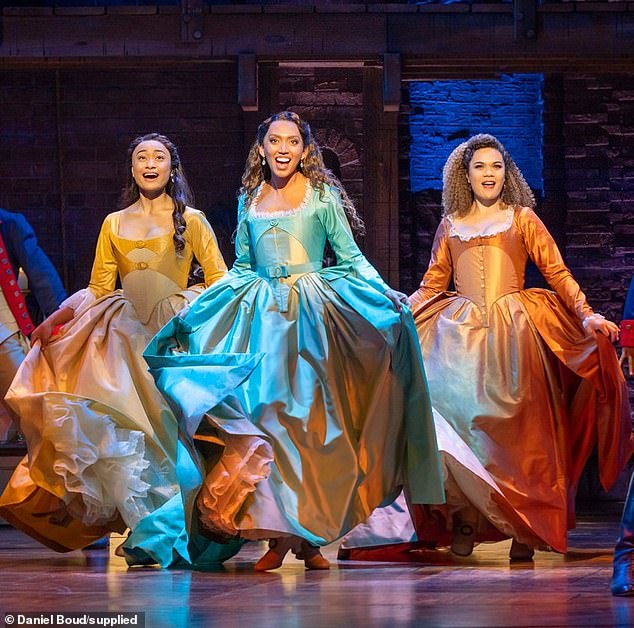 From left: Elandrah Eramiha, Chloe Zuel and Akina Edmonds on stage during the Australian production of Hamilton 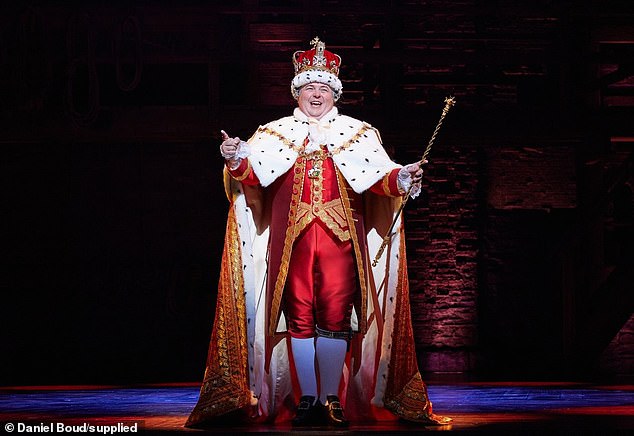 Brent Hill was a crowd favourite as King George III

Where to see Hamilton

Hamilton is only showing in one theatre in the world at present – the Sydney Lyric theatre, which is allowed to host a full capacity audience of 1971 people.

Daily Mail Australia was told there is a chance Melbourne could get a run of Hamilton in 2022 – if the demand is there.

Melbourne and Brisbane were understood to have pitched to host the Australian premiere. 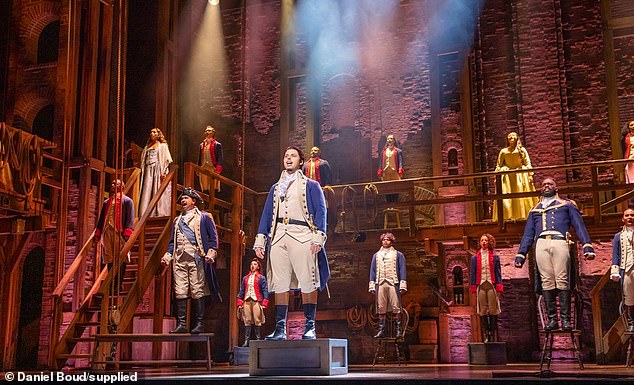 Hamilton started out as a celebrated and then award-winning, genre-bending contemporary musical in the United States and has now come to Australia 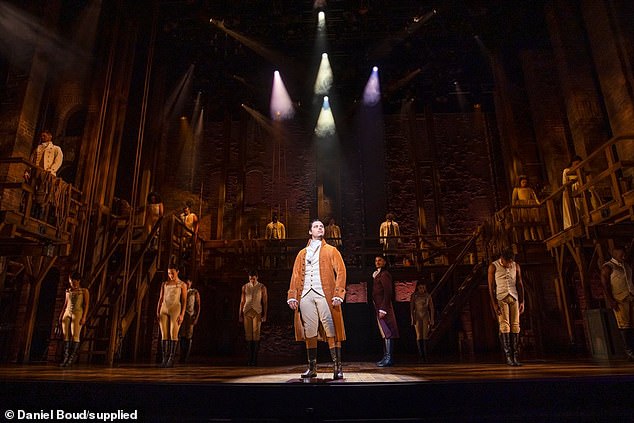 Jason Arrow, who plays Alexander Hamilton, had never played a lead role before Hamilton – but the consensus is he absolutely nailed it

The subject matter – the founding fathers of the United States, especially Alexander Hamilton – is less important for Australian audiences than the way Hamilton is delivered.

It has been universally praised for an incredible musical score – featuring sharply-written songs and an unexpected mix of musical styles and spoken word. 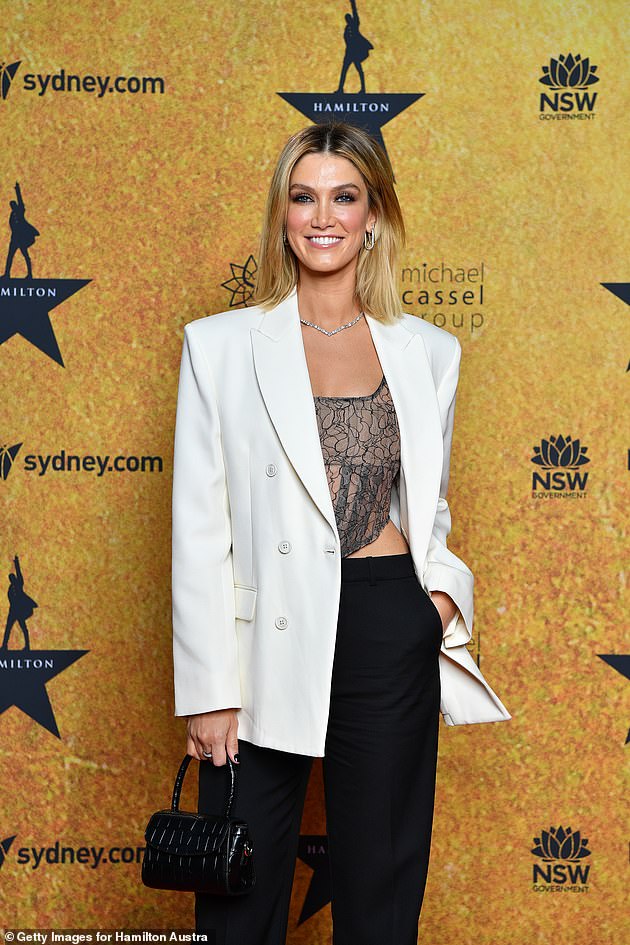 Delta Goodrem opted for a glowing makeup palette and wore her blonde hair down, adding a diamond necklace for sparkle on the Hamilton red carpet 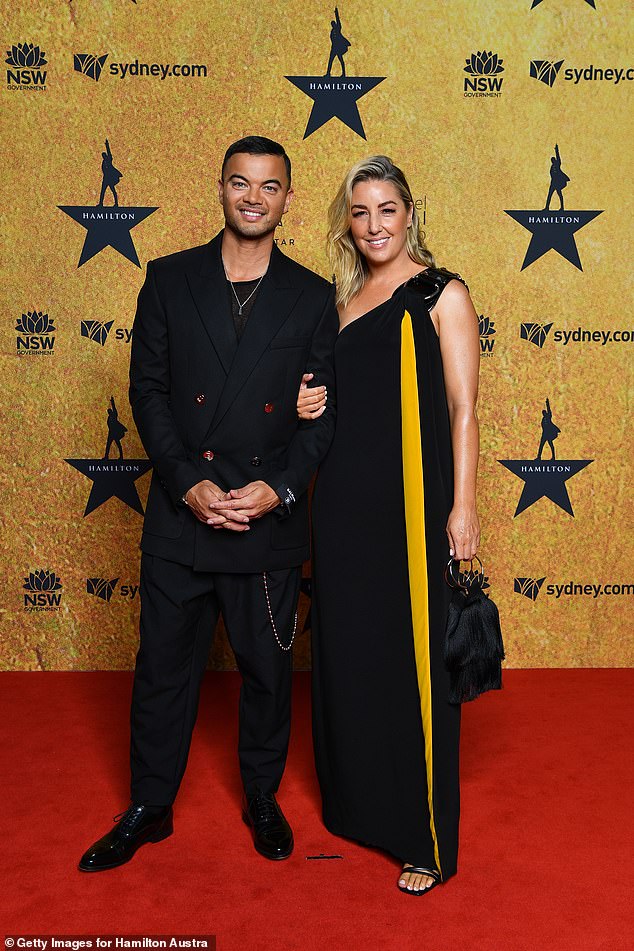 Trendy: Guy Sebastian and his wife Jules Sebastian looked sleek in black ensembles on the Hamilton red carpet, with the singer, 39, choosing a black suit with a chic fob chain and patent dress shoes. Both pictured

Reviewers have noted the audience receives Hamilton as if they’re at a rock concert.

At its heart though, Hamilton is a fascinating and fast-paced underdog story.

Alexander Hamilton was born into poverty in the Caribbean and is sometimes called the ‘forgotten founding father’, but was also a brilliant and cocky genius.

Each session of Hamilton lasts two hours and 50 minutes and there is a 20 minute intermission.

Why should you see Hamilton?

Because it’s one of those ‘once in 10 years’ type shows where the reality matches the hype – and there was a lot of hype.

Another reason is – at the moment – the rest of the world is denied the chance to see Hamilton because of the pandemic.

Hamilton was a global hit – playing to sold-out crowds in New York, London, Los Angeles, Toronto and Puerto Rico and was also scheduled for Hamburg, Germany.

Then the pandemic hit and closed down the contemporary musical worldwide.

Since kicking off in the United States in 2015, Hamilton has been called everything from a ‘record-breaking masterpiece’ to the ‘reinvention of the musical’ and won every award going – from the Tony to the Grammy and even a Pulitzer.

Most of its awards around the world have been for acting and the music, although it has also won major awards in the US and UK for costumes, lighting, choreography and sound.

So it is much more than an excellent play – it dazzles and rocks audiences too, and keeping them completely spellbound taking them through the many joyful highs and touching lows.

It would be considered a major shock if Hamilton didn’t dominate Australian theatre’s Helpmann Awards when they are next held.

In the US, Hamilton is considered so important and historic that a planned change to the $10 note – the replacement of Alexander Hamilton with Harriet Tubman – was shelved and white slave-owning former President Andrew Jackson was dropped instead. 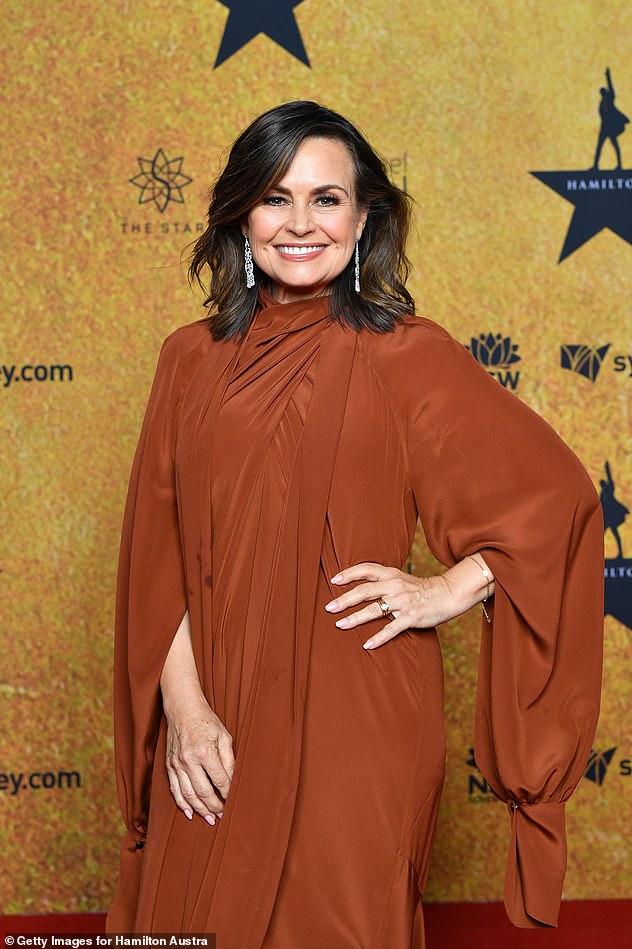 Pretty: Lisa opted for a refined makeup palette, using earthy tones, and finished her look with dangle earrings on the Hamilton red carpet 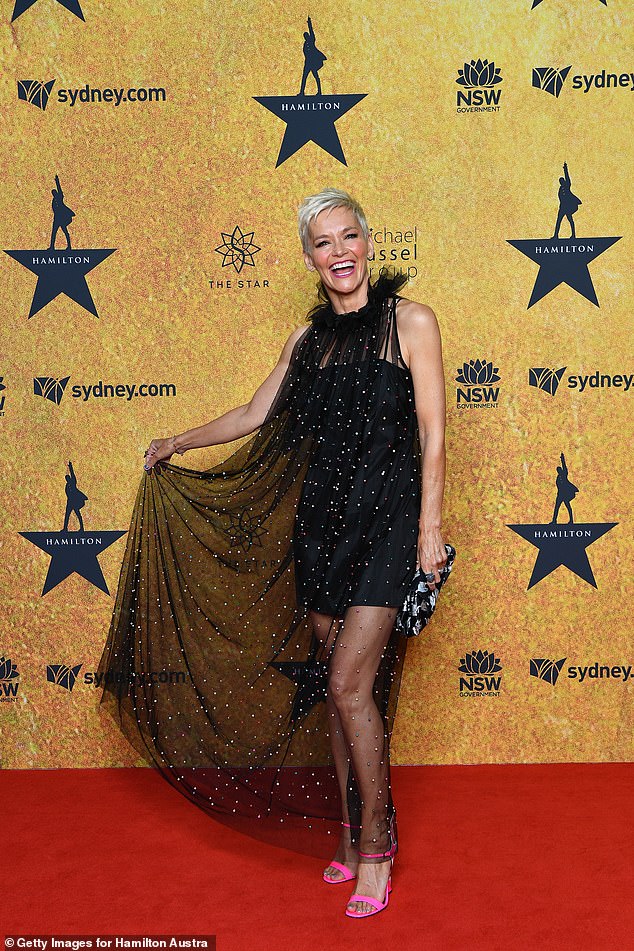 Think pink: The 50-year-old Jessica Rowe beamed as she posed, holding up the sheer material to show off her neon pink heels on the Hamilton red carpet

What to know about the cast of Hamilton

They are a young but obviously super-talented mostly Australian cast without much headline experience who have been praised for grabbing their opportunities.

That especially applies to the two male leads – Jason Arrow (as Alexander Hamilton) and Lyndon Watts (as narrator and Hamilton’s nemesis Aaron Burr).

It has been a consistent casting policy from the early days of Hamilton – which was first on stage in 2015 – to hire ‘people of colour’ for almost all roles, regardless of the ethnic background of the characters.

Only two minor cast members have appeared in Hamilton in the United States. 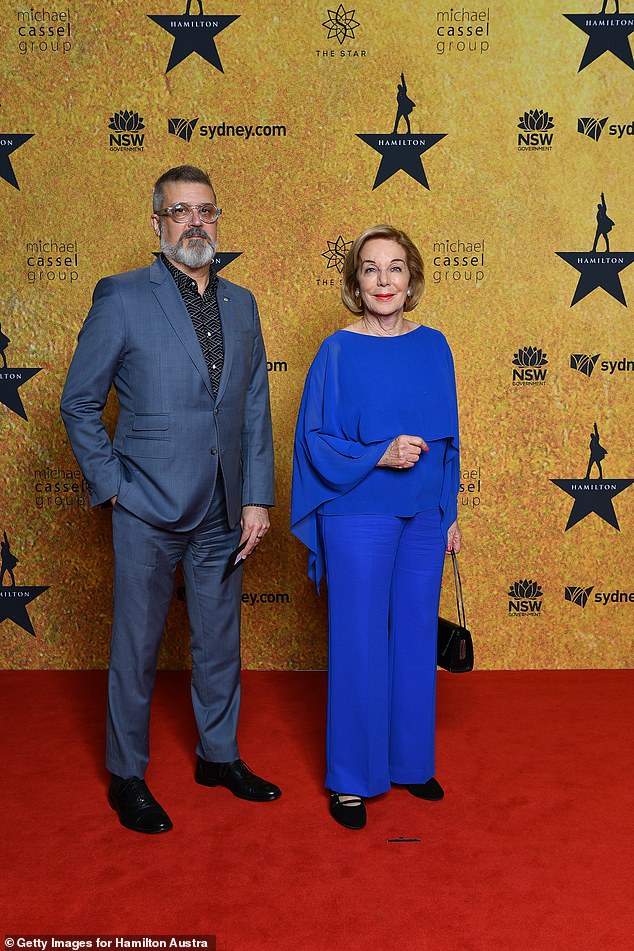 Bright: Ita Buttrose, 79, (pictured) was bright in blue, wearing a floating, layered top and pants in matching tones along with a black purse and heels 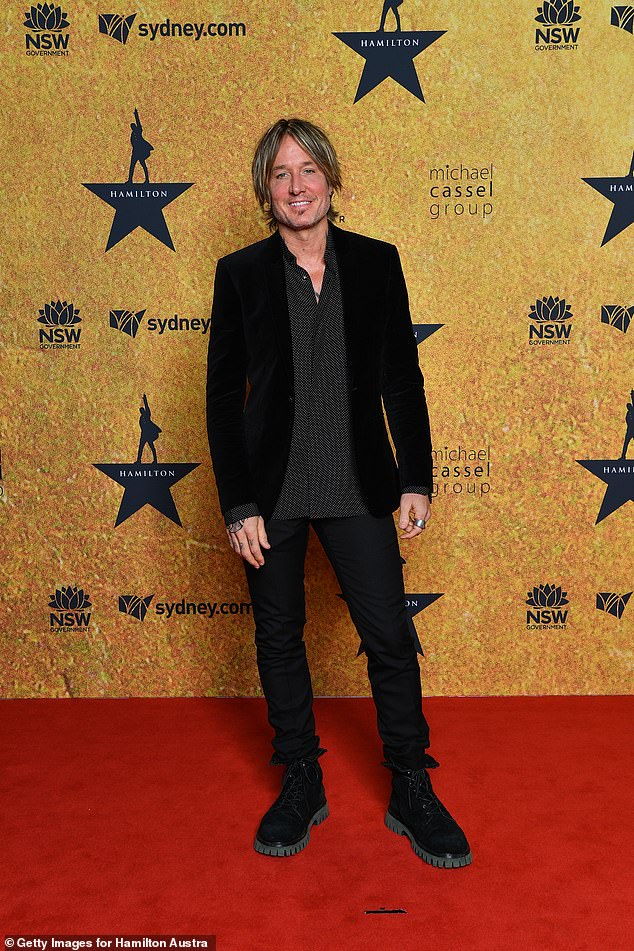 On his own! Keith Urban, 53, (pictured) went to the Hamilton red carpet solo, leaving wife Nicole Kidman at home with the children

How to get Hamilton tickets

To get the tickets you want, and without paying inflated prices, there’s almost a three-month wait at present.

You might be able able to find a ticket to see Hamilton before June – if you are prepared to go during the week and pay over $200 for a ticket.

But you will struggle to get the seats you want if you only want to go at the weekend.

After June, things get a bit easier – that’s the soonest that standard $70 tickets are for sale, though obviously they won’t last long.

It’s important to note that ticketmaster is the only authorised online ticket agency for Hamilton.

The show’s Australian Promoter, Michael Cassel Group, has released a new block of tickets allowing for bookings right up to November. 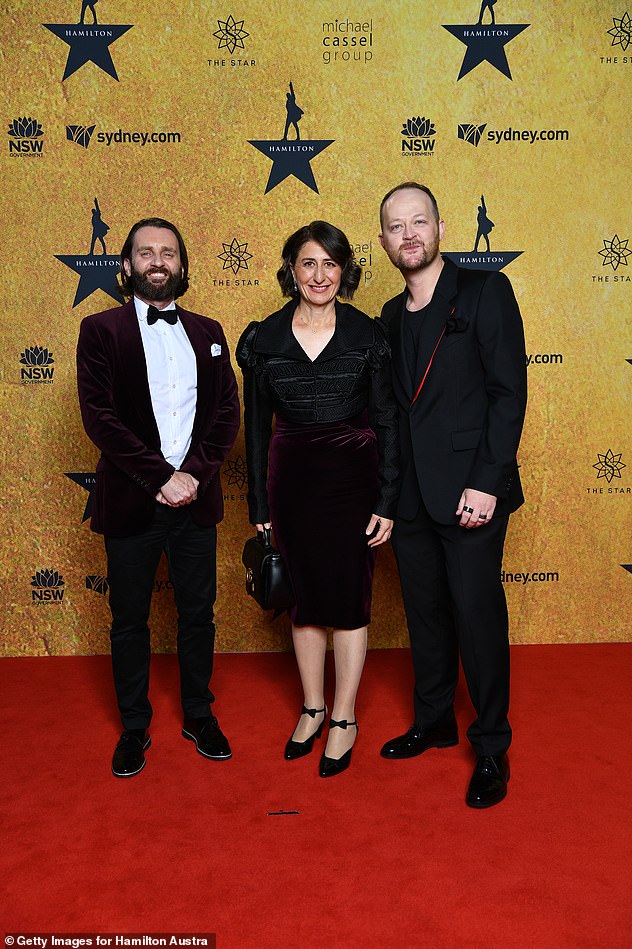 Wow! The Premier of New South Wales carried a black purse and added a pair of heels with bowtie details