Prince Harry and Meghan Markle attended a charity performance of the hit musical at the Victoria Palace Theatre in London, delighting the cast.

Harry took to the stage where he burst into song himself with a rendition of You’ll Be Back – sung by the character of his great ancestor King George III in the musical.

Actor Michael Jibson, who plays the king, joked Harry had ‘upstaged him’ with the surprise performance. 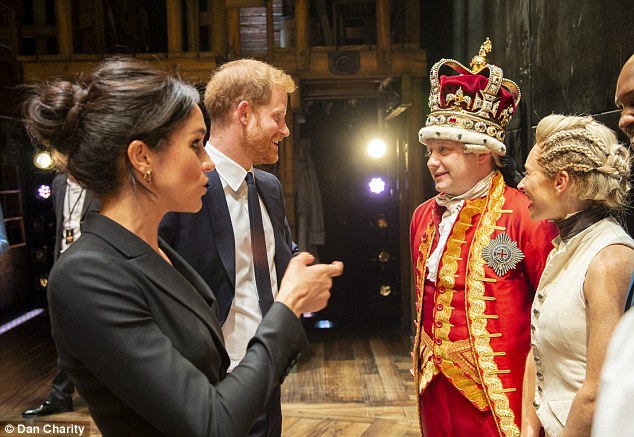 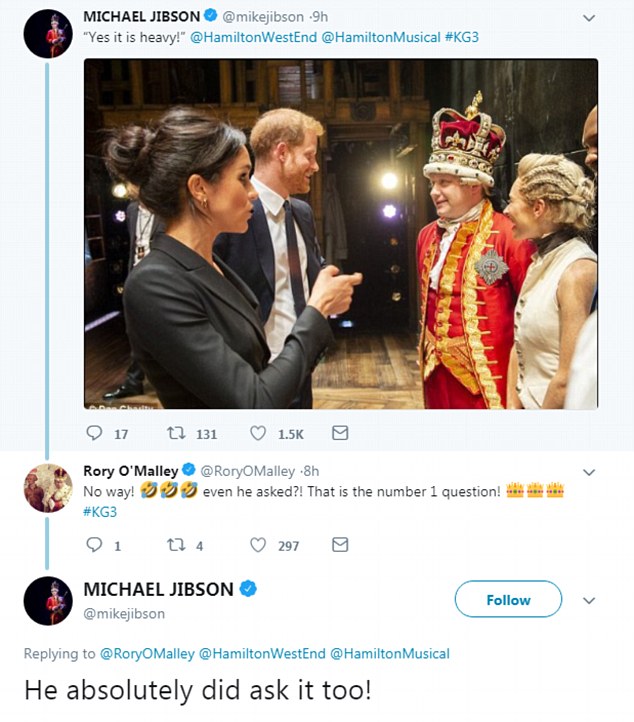 Actor Michael Jibson, who plays King George III, joked Harry had ‘upstaged him’ at his own play 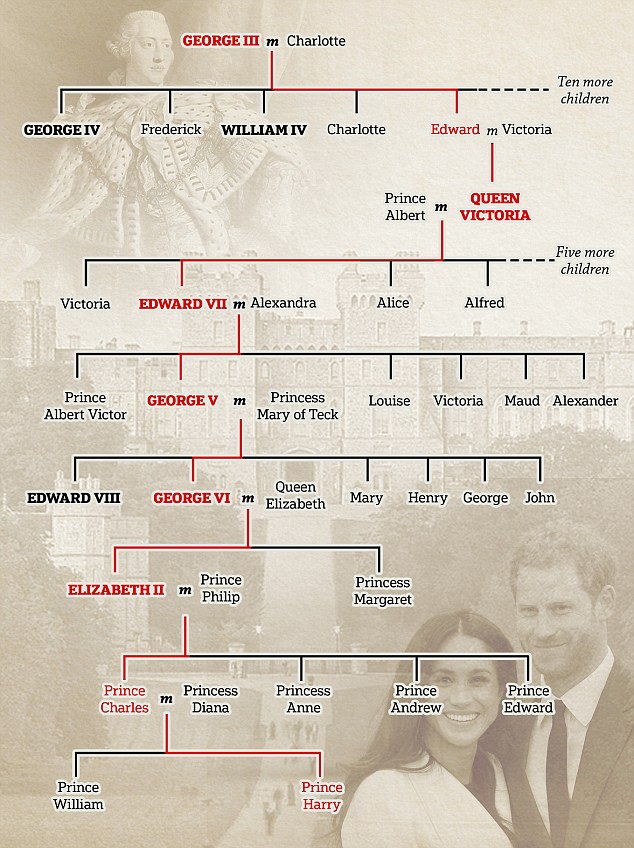 Mr Jibson also revealed that Harry asked him if his crown was heavy, and he admitted that it was indeed heavy.

Other cast members took to social media to share their excitement at the royals being among the night’s audience.

Rachel John, an Olivier nominated actress, who plays Angelica Schuyler in the musical wrote: ‘Last night was epic…”watch the lady behind Prince Harry” that was me’.

She then shared a video of her jaw-dropping reaction when Prince Harry began to sing.

Actor Leslie Garcia Bowman wrote: ‘A night we will all remember for the rest of our lives.’ 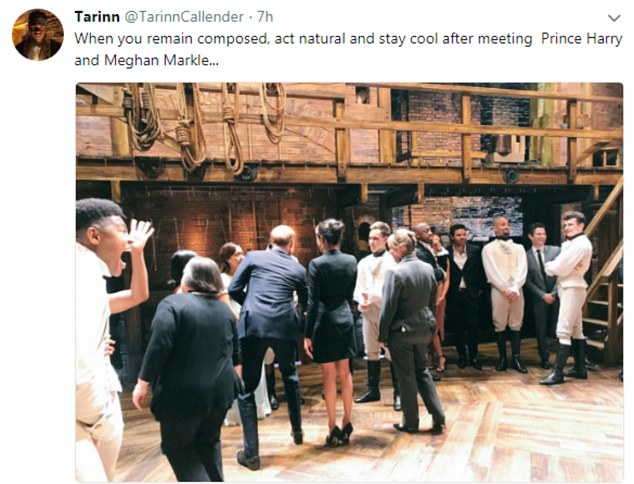 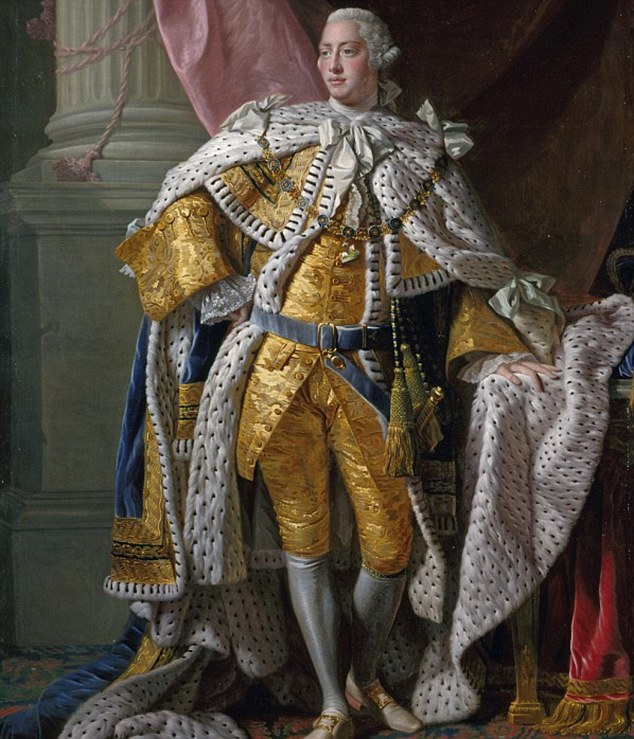 King George III (pictured), who ruled from 1760 to 1820, is Harry’s six-times great grandfather

The Duke and Duchess of Sussex were introduced to the show’s award-winning creator, Lin-Manuel Miranda, and his wife Vanessa Nadal before the group took their seats in the theatre’s Royal Circle.

The event, which marks the royals’ first public appearance in a month, was held to benefit Prince Harry’s charity Sentebale, which works with children and young people affected by HIV in southern Africa.

But Harry clearly took it in good spirit. After the show he got on stage and burst into song, mimicking one of the tunes sung by his ancestor, with the words ‘you say’.

The Duke of Sussex  after the performance meeting King George, cast and crew backstage at the Victoria Palace Theatre 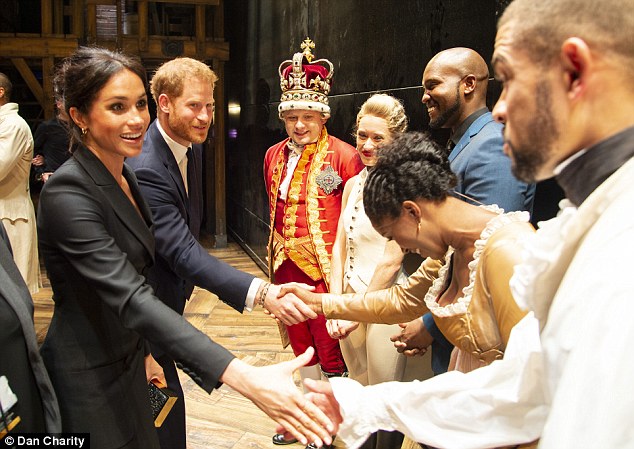 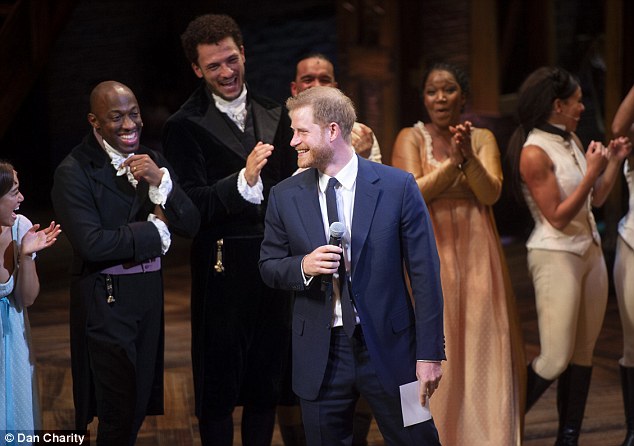 The audience clapped and cheered at his surprisingly talented antics. But Harry quickly cautioned them not to expect more, saying of the show’s creator: ‘He did try but I said no.’

He thanked the audience for raising hundreds of thousands of pounds for his charity, Sentebale, and to the cast and crew.

He added: ‘I don’t know how you guys do this every single night, over and over again, and in this heat as well.’

Creator Lin-Manuel Miranda also proved a star turn as he told the audience that he came up with idea of putting King George in his show while he was on honeymoon.

‘I wrote the song on my honeymoon and smash, cut to 2018 and I am sitting next to his sixth great-grandson, the Duke of Sussex….’