A bungling robber, 32, who chased a security guard with a hammer around a car park before being smashed with a cash box has been jailed for nearly five years.

Jordan Mitchell, of Wakefield, ran after the G4S security guard, who was doing a cash collection, outside Go Outdoors in Derby at midday on December 9.

He left blood at the scene after being smacked with the cash box by the hero security guard.

Jordan Mitchell, of Wakefield, chased (pictured) a G4S security guard around a Go Outdoors car park in in Derby, on December 9 last year. The guard was carrying out a cash collection when Mitchell leaped out from a passenger door and approached him

CCTV footage shows a black GLA Mercedes pull up next to a G4S security van doing a cash collection.

As the security guard walks towards the van carrying the cash box from Go Outdoos, Mitchell leaps out of the Mercedes rear passenger door.

The G4S guard immediately flees from unloading at the van and sprints across the car park. 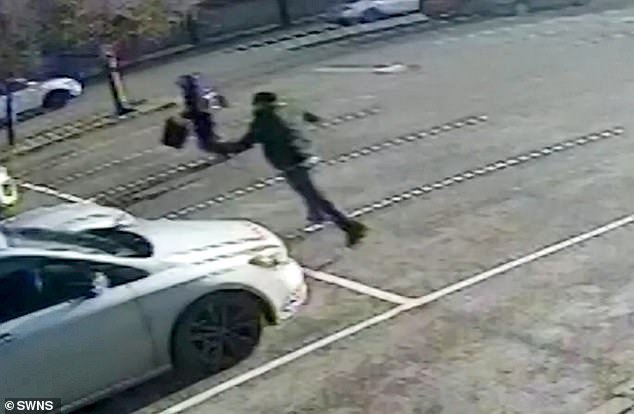 He is chased by the thief, who is seen clutching a hammer and wearing a balaclava, around the seemingly empty car park

He is chased by the thief, who is seen clutching a hammer, around the seemingly empty car park.

Meanwhile the black Mercedes turns left and flees the scene. It was allegedly dumped in Cotton Lane before Mitchell’s accomplices returned with a red Mercedes. 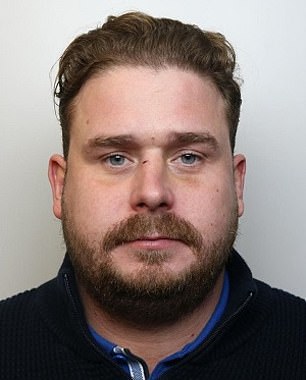 Mitchell (pictured) has been jailed for four years and 18 months

Mitchell, wearing a balaclava, was then seen signalling to the getaway driver to help before the terrified guard hurled the cash box at him and cut his hand.

He was forced to flee empty-handed but was caught when DNA was retrieved from blood left at the scene.

It produced a match after his DNA had been taken after he was jailed for his part in a £200,000 raid of a jewellers in Rugby, Warwickshire, in 2013.

Mitchell admitted armed robbery and was jailed for four years and eight months at Derby Crown Court on Friday.

Detective Sergeant Tarj Nizzer, of Derbyshire Police, said: ‘A robbery of this nature is something, thankfully, rare in our county but in many ways that makes the actions of Jordan Mitchell all the more shocking.’ 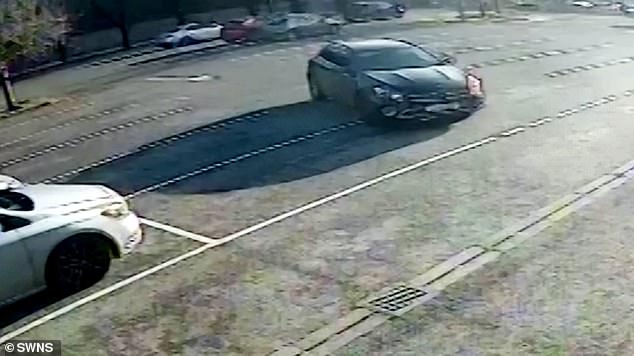 Mitchell arrived in a black GLA Mercedes (pictured). As he jumped out of the vehicle, is it thought to have been dumped in Cotton Lane before his accomplices returned with a red Mercedes

‘The quick thinking of the guard who Mitchell threatened, to throw the cash box at him meant that we were quickly able to identify him from a DNA match on the national database and he was quickly arrested.

‘I would like to thank members of the public who came to the aid of the security guard at the scene, as well as those who came forward as witnesses to the incident.’