Philip Hammond today insisted the UK should only make a ‘modest’ break with the EU – as he admitted MPs will not know the ‘full details’ of the Brexit deal before they are asked to sign it off.

The Chancellor told business leaders at the Davos summit that the British and European economies should only be ‘selectively’ separated and in a minimal fashion.

He also risked angering Brexiteers by confirming that only the ‘high level shape’ of the future relationship with Brussels will be clear when it comes before the House of Commons.

The comments suggest MPs will have to authorise the £38billion divorce bill in the withdrawal agreement before details of the trade deal are hammered out.

Remainers could also be infuriated as they have been promised a ‘meaningful vote’ on the terms of a deal.

In a speech at the World Economic Forum, Mr Hammond said trade deals usually brought economies closer, but Brexit was the opposite.

‘We are taking two completely interconnected and aligned economies with high levels of trade between them, and selectively, moving them, hopefully very modestly, apart,’ he said.

‘We should be confident of reaching something much more ambitious than any free trade agreement has ever achieved.

‘Something that properly reflects the 45 years that we have spent as members of the EU bringing our economies closer together, and the common regulatory starting point that follows from that experience.’

The remarks come at a crucial time in the Brexit talks, with Tory Eurosceptics increasingly anxious that the government is giving too much ground.

They are already deeply suspicious of Mr Hammond, who is seen as having waged a rearguard action to soften our departure from the EU.

Speaking to Bloomberg at the summit earlier, Mr Hammond was asked if he expected details of the UK’s new relationship with the EU to be finalised by the time Parliament votes on withdrawal terms.

He replied: ‘Probably not the full details but we would expect the high level shape of the future relationship to be emerging by that time.’

Mr Hammond also made clear that securing access to the EU markets for financial services firms would be a red line.

But he said that might not be formal ‘passporting’ arrangements – which Brussels has already ruled out. Those rules allow companies to operate across the EU unhindered no matter where they are based.

‘Financial services have to be part of our relationship with the European Union because they are such a part and important part of our economy,’ Mr Hammond said.

‘We can operate without passporting through some kind of enhanced equivalence regime but it has to be a regime that is robust and that is objectively determined.

‘It can’t be something that is dependent on the whim of the European Commission. It has got to be more robust than that.’

Mr Hammond said he believed the UK had a negotiating advantage on the issue of financial services being included in the deal.

He said: ‘We have to negotiate that with the European Union but the UK’s financial services sector is larger than the rest of the European Union’s put together so we have some negotiating weight in this discussion.’

Theresa May is also in Davos for the gathering of the global elite, and is due to make a keynote speech later.

Last night the PM held talks with Swiss president Alain Berset, and she is due to meet US president Donald Trump later. 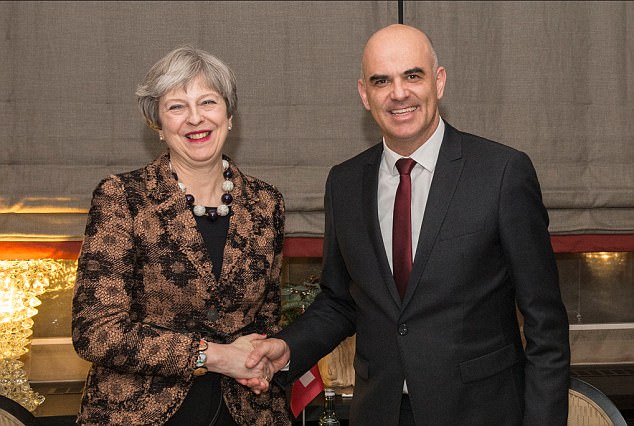 Last night Theresa May held talks with Swiss president Alain Berset (pictured), and she is due to meet US president Donald Trump later