The Chancellor said he had listened to critics on his own side and was making sure existing welfare claimants would not lose out when they are moved onto the new benefit.

Mr Hammond also announced he would reverse cuts made by George Osborne when he was Chancellor to the work allowance part of the benefit – costing £1.7billion a year in 2023.

Mr Hammond said: ‘Today I can go further with a package of measures worth a £1billion over 5 years enabling the Secretary of State for Work and Pensions to introduce additional protections as existing welfare claimants move onto Universal Credit and she will announce details when she introduces the Managed Migration Regulations later this year.

‘Secondly, I have heard the concerns about the rates and allowances within the design of the system. In my first Autumn Statement I reduced the Universal Credit taper rate from 65 per cent to 63 per cent. 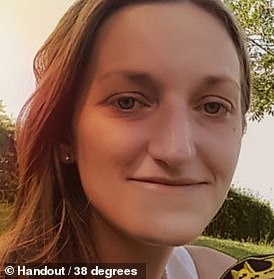 Debbie Taylor, 33, said she was left up to £600 a month out of pocket after she was moved over to universal credit in April

Debbie Taylor, a mum of one from Croydon, in south London, said she was left poorer in the change-over to Universal Credit.

The nursery worker, 33, said she was reassured that her payments would not be seriously affected by the welfrae shake-up.

But her payments have been inconsistent since she was moved over to UC in April – leaving her between  she was left between £150 and £600 a month worse off a month.

She said that while the UC team and HMRC remain in a row about who is at fault, she remains out of pocket.

She said: ‘I work hard and have always lived from pay cheque to pay cheque, budgeting wisely to make my money stretch for me and my son, but I’ve now been signed off work by my GP, due to stress.

‘It’s ironic that a system that is trying to get people back into work is actually pushing hard-working people like myself to the brink and out of work due to the mental strain of it all and not actually being able to afford to get there.

‘I’m fearful about whether I’ll have a roof over our heads next month, I’ve had to start to walk everywhere as cannot afford to travel and I’ve had to cut further back on food. I simply don’t know what more I can do now.’

‘And today I can tell the House I am increasing work allowances in Universal Credit by £1,000 per annum at a cost of £1.7billion annually once roll-out is complete benefitting 2.4million working-families-with-children and people with disabilities by £630 per year.’

The reform has sparked a Tory backlash with Sir John Major warning it will be as unpopular as the poll tax and Iain Duncan Smith, the architect of Universal Credit, demanding an extra £2billion for it to work.

It is designed to make the welfare system less complicated and ensure no-one faces a situation where they would be better off claiming benefits than working.

But according to reports, millions of families could be left up to £200-a-month worse off when the new system is introduced in July.

Work and Pensions Secretary Esther McVey caused a storm earlier this month by seeming to contradict the PM’s claim that current transitional funds were enough to guarantee no-one would lose out.

Ex Tory minister Justine Greening yesterday said Conservatives are deeply worried about it as she lashed the Treasury – warning that they need to get their policies ‘right first time’ or risk ‘handing the keys’ to No10 back to Labour.

Analysis exclusively published by MailOnline last week found that 39 Tory MPs – including over a dozen ministers – could lose their seats amid the Universal Credit backlash.

Ms Greening , a leading Tory moderate and former education secretary, tore into the Treasury for failing to come up with a dynamic vision for the country.

Singling out Universal Credit for criticism, she told Sophy Ridge on Sunday on Sky News: ‘I think it’s going to be hard for many of us who are concerned about how this will play out in our local communities to support it without the changes it needs to be successful and I was about to say this is a good example of the Treasury reform I’m talking about.

WHAT IS UNIVERSAL CREDIT?

A radical change to the benefits system which combines six payments – including tax credits, housing benefit and income support – into a single, means-tested payment.

A claimant’s benefits should be adjusted automatically if their wages change.

Benefits will gradually ‘taper’ off if a claimant finds work or earns more.

What is the timetable?

After teething troubles with the computer systems implementation has been hit by delays.

There are currently around 610,000 on UC and this will go up by anther 12 million over the next five years.

Why a six-week delay on payments?

Controversially the benefit is paid six weeks in arrears – this is because it is based on your previous month’s earnings.

‘Five years ago decisions were taken in terms of resources for Universal Credit that we are now seeing playing out and as a result it is very likely that the Chancellor will have to put additional money in.

‘Now that isn’t a sensible approach, we need a Treasury that can get things right first time, whether it is Universal Credit, whether it is schools funding, whether it’s NHS funding, that has a clear strategy that goes alongside that.’

In a furious attack, she added: ‘Well this is generally what happens.

‘We come in, we take some difficult decisions as a responsible party in cleaning up the latest economic mess left by Labour.

‘If we can’t set out a compelling vision for a country with equality of opportunity – and let’s face it, it is 31 years now since the Conservative party last won a landslide election – then we’ll do what we always do.

‘We’ll just end up handing the keys back to Labour and that’s the cycle that we have to break.’

Many other leading Tories had also urged the Government to find extra money to bail out the wlefrae shake-up.

Sir John Major, the ex Tory PM, warned that it could prove as unpopular as the poll tax.

That tax sparked nation-wide riots and contributed to Margaret Thatcher being ousted from Number Ten. 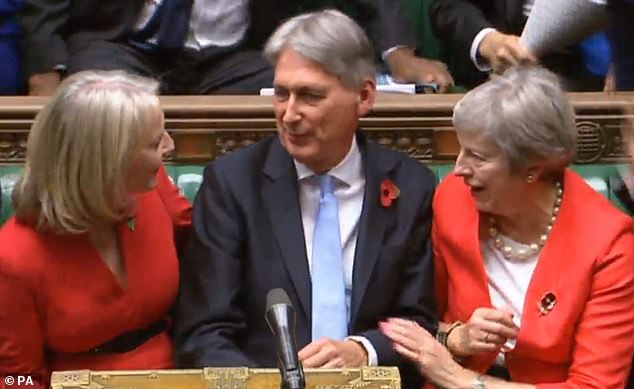