‘I have done all that I promised’: Hampshire chairman Rod Bransgrove sounds out potential investors as he looks to sell shares in county club

Rod Bransgrove, the man who saved Hampshire from insolvency and then bankrolled them for 20 years, is looking to sell some of his shares in the club before he turns 70 in September.

Bransgrove has pumped £15million of his own money into the Ageas Bowl, which is one of two grounds — alongside Old Trafford — set to share the hosting of six Tests and three Twenty20s against West Indies and Pakistan this summer.

‘A number of potential investors have been interested in acquiring part of the business,’ he told The Cricketer magazine for their June edition.

‘This interest has come from India, Asia and France. If we do sell any new shares in the company, these will be only for new investors and I doubt that I shall see a return on my shareholding during my lifetime.’

Having been appointed chairman in 2000, he is looking to relinquish his autonomy and assume a lower profile in the belief his work at the ground is complete — short of staging an elusive Ashes Test, which the venue keeps missing out on to his bafflement.

‘My job is finished as I have done all that I promised,’ added Bransgrove. ‘We have built a business around Hampshire Cricket so the club won’t be threatened and we have attracted some amazing players.’ 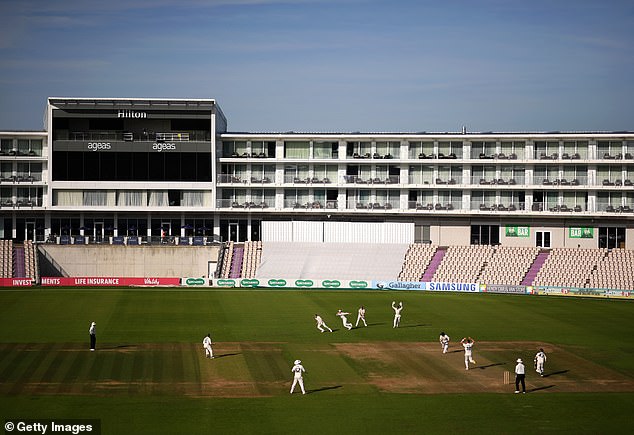 Hampshire have hosted just three Tests, although they are at the forefront of the ECB’s plans to deliver bio-secure cricket, a factor that may see them looked upon more favourably in the future.

Southampton and Manchester are set to be confirmed as the two venues to stage safe cricket this summer. The counties who paid £1million apiece to be hosts on the original 2020 itinerary will have their deposits returned.

Sportsmail believes all newly arranged fixtures will be ‘cost neutral’ meaning hosts will neither make or lose money from them. However, there is likely to be a profit in the fees paid for exclusive use of the hotels on the two sites.