‘We’re in a very good position… we’ll step up and do anything we need to’: Hampshire willing to host England’s Test cricket this summer as chairman insists their biosecure environment can help ECB amid coronavirus crisis

Hampshire are willing to host more than one Test this summer, with chairman Rod Bransgrove confident the club can help get cricket up and running again in a biosecure environment.

The Ageas Bowl was not scheduled to host any of England’s six home Tests in 2020, having been granted a pair of Twenty20 internationals against Australia and Pakistan.

But its onsite Hilton Hotel and Wellbeing Centre make it ideally placed to answer an emergency call from the ECB, who are liaising with the government in a bid to find safe ways of staging international sport during the coronavirus pandemic.

The ground, five miles east of Southampton, has staged only three Tests in almost a decade. But the stringent demands of biosecurity will rule out most venues, leaving the possibility that the Ageas Bowl could add two Tests to its CV in a matter of weeks.

‘We could do that, and we’re prepared to,’ Bransgove told Sportsmail. ‘From a logistical point of view, we’re in a very good position to offer a biosecure environment. We’ll step up and do anything we need to.

‘It would be a very good opportunity for us, if an ironic one, to prove once and for all that we should be one of the regular Test match grounds in this country. It would be a sad way of getting there, but it would be great to be part of the solution.’

As well as the obvious advantages offered by the hotel, the Ageas Bowl’s health centre could be used to provide players, backroom staff, administrators and media with skin prick tests on their way into the ground. Amenities include a golf course and several gyms, while Bransgrove says he would even install a cinema to keep players entertained during downtime. 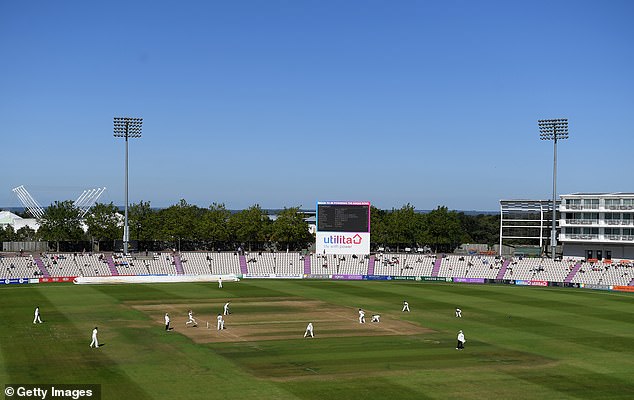 ‘We would create a quarantine zone where we can house anyone who has the symptoms,’ he said. ‘And we can quarantine the staff to provide a secure environment.’

Restarting the hotel after it went into shutdown would involve huge administrative costs, with around 350 staff working both there and at the club itself currently furloughed. Fewer than 20 have been on full-time.

Discussions between Hampshire and the ECB are at an early stage, but Bransgrove added: ‘We need sport on as soon as possible. The dearth of sport has shown how important it is to so many people.’