The page, from Charles Darwin’s On The Origin Of Species was written at Darwin’s family home Down House

A fragment from a page where Charles Darwin outlined his theory of evolution is at risk of leaving the UK – unless a British buyer forks out nearly £500,000.

The handwritten, draft page of Darwin’s On The Origin Of Species could be sold abroad unless a UK buyer is found.

The page, which even includes the words ‘natural selection’, contains Darwin’s corrections and reworking and ‘evidence of pauses for contemplation’.

Parts of it are substantially different from what was eventually published in 1859, in the first edition of the book.

Arts, Heritage and Tourism Minister Michael Ellis has placed a temporary export bar on the page, from a private collection, and two others from Darwin’s later publications, in the hope that a UK buyer will be found.

Written at Darwin’s family home, Down House, page number 324 forms part of the English naturalist’s conclusion for Chapter 8, which focuses on hybridism and is the only substantial part of the chapter from the draft to survive.

The two other pages are from The Expressions Of The Emotions In Man And Animals, and the three combined are worth more than £800,000.

Peter Barber, member of the reviewing committee on the export of works of art and objects of cultural interest, which made the decision, said: ‘Handwritten drafts of Charles Darwin’s books are of the greatest rarity.

‘The few surviving sheets, touched by and written on by him, with evidence of pauses for contemplation, or spurts reflecting the rapid flow of thought, bring one closer to the man and his process of creation than perhaps anything else. 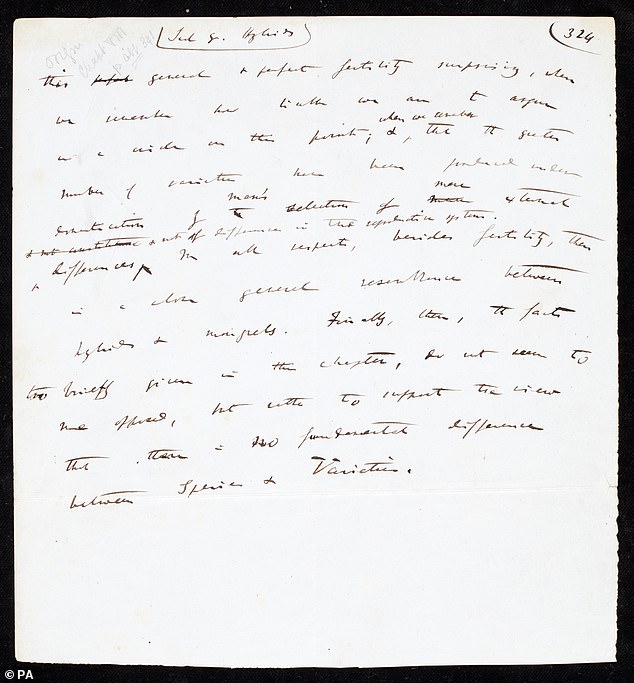 A page from the handwritten draft from Charles Darwin’s revolutionary ‘On the Origin of Species’, in which he outlined his theory of evolution

‘The fragments under threat of export are particularly important. They show how Darwin revised his texts, pinning successive revisions on to sheets containing an earlier draft.

‘One fragment comes from his best-known work and indeed includes the words ‘natural selection’. But the other two fragments, from his Expression Of The Emotions In Man And Animals, are perhaps even more important.

‘Though less well-known than On The Origin Of Species, this book, among the earliest works on behavioural psychology, greatly influenced Sigmund Freud.

‘The nation has the chance to save revealing and intimate fragments of two works which, directly or indirectly, have shaped and continue to shape the modern world.’

Mr Ellis said the pieces ‘represent a direct and physical connection’ to how Darwin ‘developed his pioneering work’.

He added: ‘These handwritten and personally signed pieces create an incredibly powerful impression that simply could not be achieved from looking at a digital version or even a published copy.’

The decision on the export licence application has been deferred until May 2019, extended until September 7 if a serious intention to raise funds to buy the pieces is made.