Left-wing protesters have dangled vile effigies along with the banner which reads ‘Hang the Tories’ off a bridge in Manchester ahead of the Conservative Party conference in the city.

The image of the two effigies hanging from nooses and wearing suits has been widely condemned on social media. It comes amid a £2million security effort involving armed police to help avoid repeats of the horrendous scenes two years ago where Tory delegates and journalists had eggs thrown at them and were spat at.

Conservative MP Michael Fabricant tweeted a picture of the disgusting banner which was hung from a footbridge near Salford. He wrote: ‘What a charming welcome to Manchester and the Conservative Party Conference. These aren’t protesters, they’re fascists.’

He later added: ‘And these people say they are “a Government in waiting”. Who will they hang next?’ 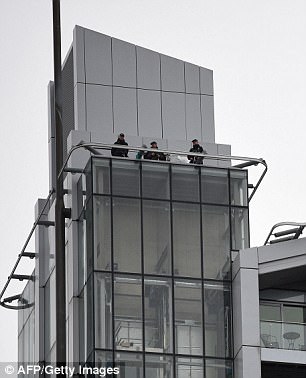 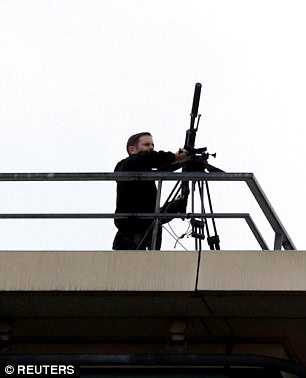 Snipers have been put in place around the Manchester Central conference centre and Midland Hotel, where a number of delegates are staying

Labour MPs have been quick to condemn the banner, claiming the banner does not represent the values of the party.

Lucy Powell, a Labour MP for the Manchester Central area where the banner was hung, tweeted: ‘On behalf of our city & my constituency, we’re sorry about this. We disagree with, & are angry with your policies, but we wish you no harm.’

Shadow Education Secretary Angela Rayner said she was ‘disgusted’ by the banner, adding it was drapped ‘not in my name’.

Another Labour MP Gareth Snell tweeted: ‘This is totally unacceptable and if people who did this think they speak for the Labour party, be assured they do not.’

Officers armed with snipers have been pictured on rooftops near the venues as Britain remains on high-alert following a series of terror threats.

Around 1,000 police officers will be on duty in the city for the four-day event while an estimated 50,000 protesters will march on the city.

A ‘ring of steel’ has been set-up around the Manchester Central conference centre and Midland Hotel, where a number of delegates are staying.

Airport-style security checks, concrete blocks and road closures have been put in place to help counter the threat of any terror attack, while delegates have been urged to hide any lanyard passes when not inside the conference.

Entrances into the venue have been set up away from where protesters can shout abuse or intimidate some of the 12,000 delegates in just another example of the precautions being taken to stop intimidation from protesters.

Greater Manchester Police insists it has upgraded its security measures this year, known as Operation Protector to avoid ugly scenes which saw 15 arrests in three days in 2015. 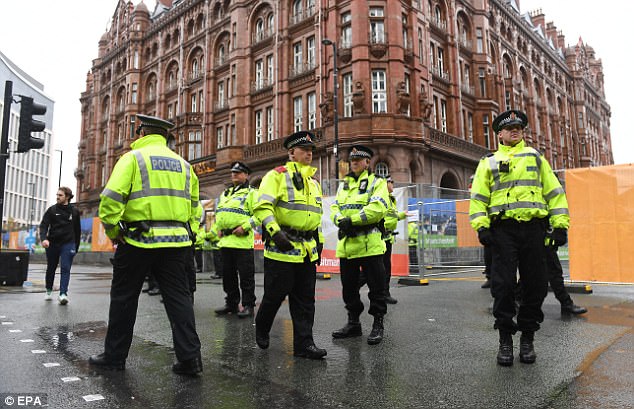 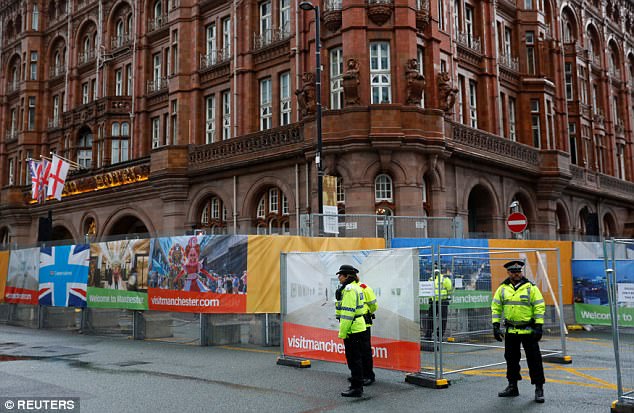 A ‘ring of steel’ has been set-up around the Manchester Central conference centre and Midland Hotel, where a number of delegates are staying 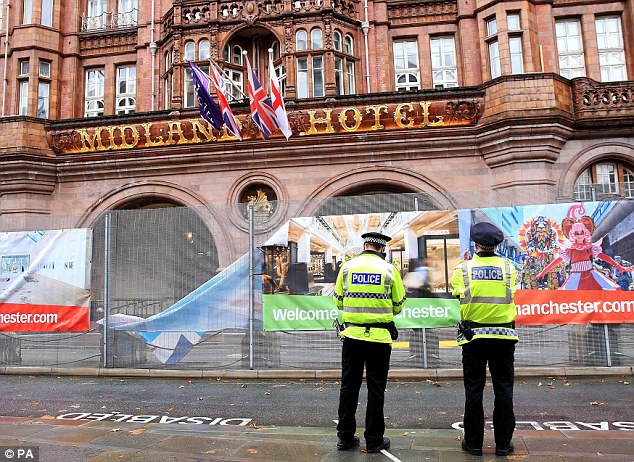 The conference is expected to pump in an estimated £30million into the Labour-controlled city, with 9,400 rooms across 91 hotels booked out for the four-day event

Senior officers have promised to take action against any protesters who ‘cross the line’.

Some 20,000 anti-Brexit marchers, including former Labour spin doctor Alastair Campbell, will descend on the city in the morning as part of what they claim will be a ‘noisy’ but peaceful protest.

Later that day, an estimated 30,000 anti-austerity protesters will also take to the streets. Both protests will convene close to the conference venue.

Chief Superintendent John O’Hare, who is leading the operation, said: ‘We have been really clear with protesters to say we are here to facilitate lawful, peaceful protest and will be doing everything can so they can exercise their right to free speech, to protest and express their opinion.

‘But with that comes a degree of responsibility. There is a line between what’s acceptable and what’s not acceptable.

‘When that line is crossed and it becomes more intimidatory behaviour and people are in fear or oppressed then at that point we will take action.’

Brexit tensions threaten to overshadow the Conservative conference tomorrow after Boris Johnson said the transition deal between Britain and the bloc should last ‘not a second more’ than two years.

His intervention ahead on the eve of the conference has been condemned by former education secretary and vocal Remain campaigner Nicky Morgan, who said people like Mr Johnson have ‘no place in a responsible government’.

In an interview with the Sun, the former Mayor of London said: ‘Am I impatient about it, do I want to get it done as fast as possible? Yes, absolutely. Do I want the delay to go on longer than two years? Not a second more.’

The conference is expected to pump in an estimated £30million into the Labour-controlled city, with 9,400 rooms across 91 hotels booked out for the four-day event. 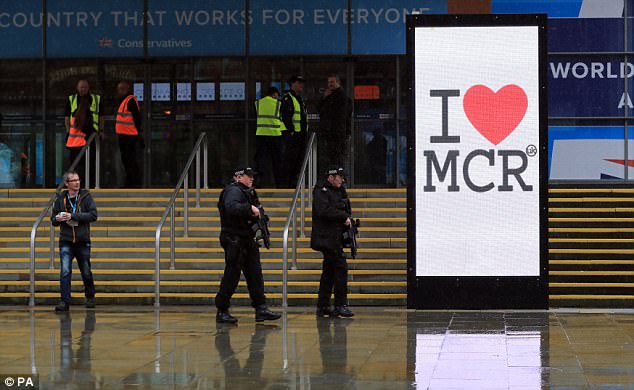 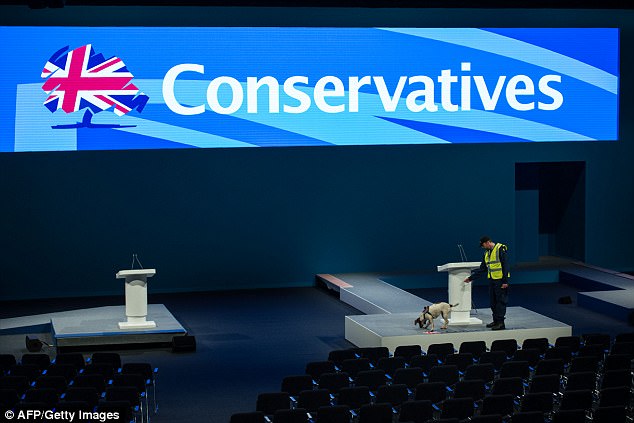 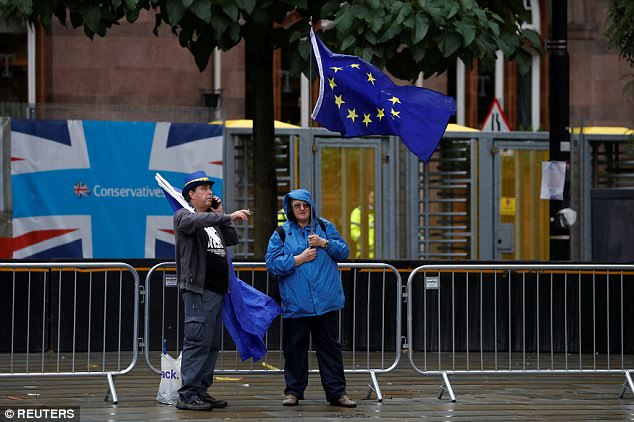 As many as 50,000 protesters are expected to take to Manchester tomorrow 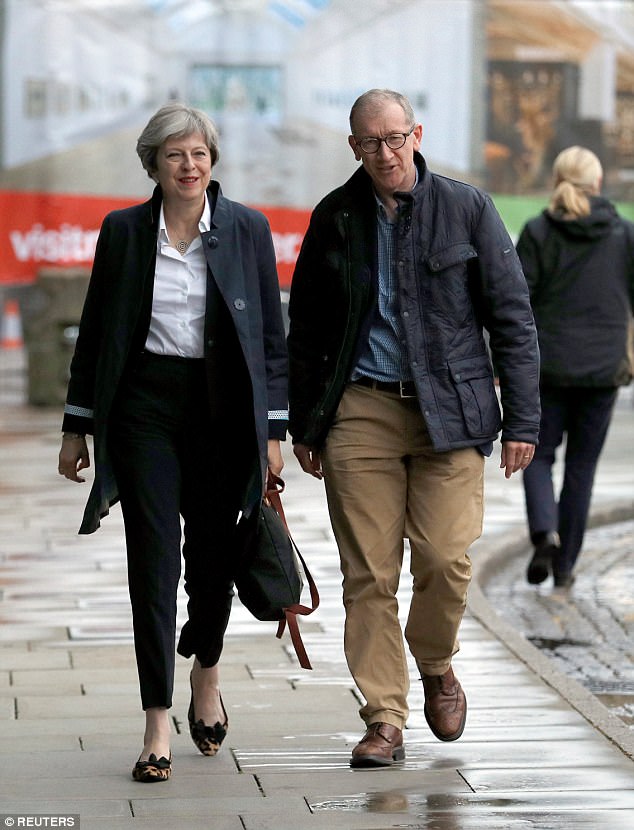