Jump start fail! Hapless driver ends up chasing his own car after push-starting it down a hill when it breaks down

This is the hilarious moment a man was left desperately chasing his car down a hill after giving it a push.

The footage seemed to be recorded on a dashcam and was filmed in Halesowen in the West Midlands.

The man, whose identity is unknown, gives his car a push start but soon realises that he can’t jump inside with the driver having to turn away swiftly from oncoming traffic as the car picks up speed.

The person driving the car doesn’t stop as the man chases frantically after the vehicle.

At the start of the clip, the man can be seen giving his car a gentle push despite being surrounded by traffic.

Initially, the car moves slowly and the man doesn’t have to try too hard to match pace with it.

However, he fails to consider the slope of the hill and his car picks up more and more speed.

The man frantically tries to catch up with his vehicle which at one point looks destined to crash into a car coming from a different direction.

Luckily, a crash is avoided as the person driving vehicle swerves right, avoiding any traffic.

As the man and his car exit the camera, he can be seen jogging after it as it slows down. 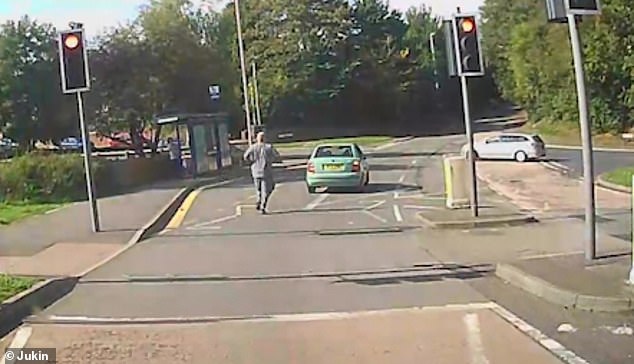 As the car picked up more and more speed, the man could be seen frantically running after it in a panic