Princess Beatrice beamed with joy today as she celebrated her engagement to property tycoon Edoardo Mapelli Mozzi, three years after her ten-year relationship with her former partner Dave Clark came to an end.

The daughter of Prince Andrew and Sarah, Duchess of York, was said to be ‘devastated’ when she split from the US-born Uber executive in 2016, after reportedly issuing an ultimatum over marriage.

Just two months later, he got together with glamorous New York advertising executive Lynn Anderson, and the couple announced their engagement in May 2017, going on to marry in a lavish ceremony in Italy the following year.

And while Beatrice was naturally delighted for her younger sister Princess Eugenie when she announced her engagement in January 2018, it was no doubt a bittersweet moment.

It made Beatrice, the last member of the royal family of marriageable age who was still single, prompting an outpouring of sympathy from royal fans, who asked when she would ‘find her Prince Charming’.

Princess Beatrice beamed with joy as she celebrated her engagement to the property tycoon Edoardo Mapelli Mozzi, 34 (pictured together) 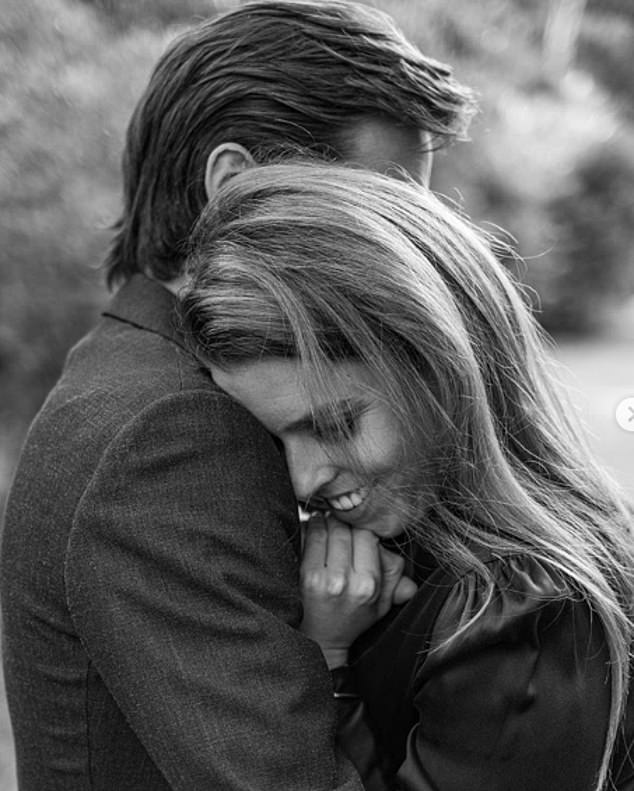 In a public statement Beatrice and Mr Mapelli Mozzi said of their 11-month romance: ‘We are extremely happy to be able to share the news of our recent engagement’ 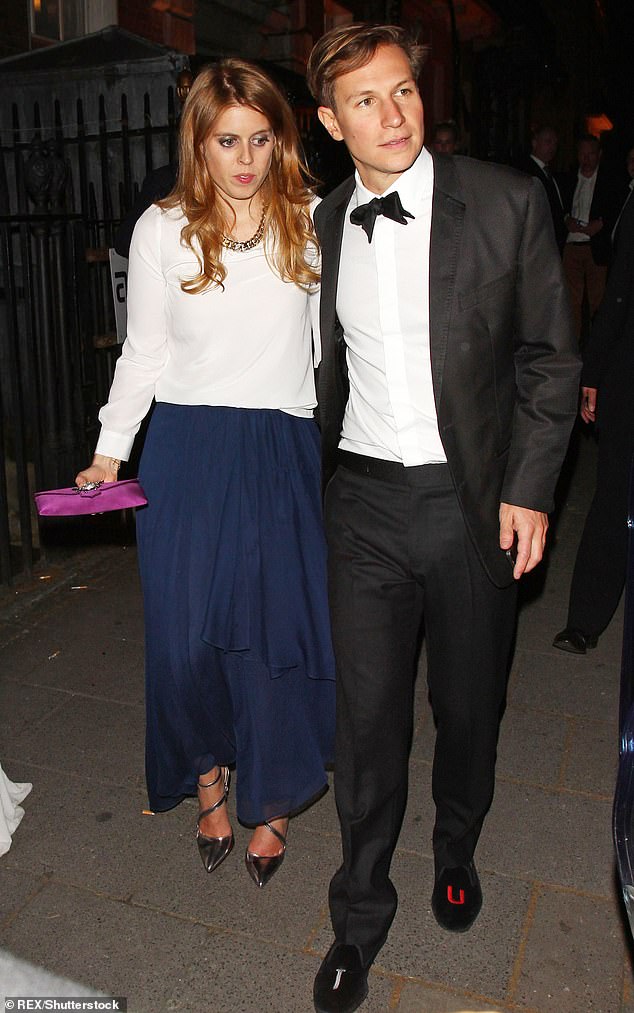 At the time of her split from Dave Clark, sources indicated it had come after down to an ultimatum over marriage.

A source close to Beatrice told The Mail on Sunday at the time: ‘After ten years together, Beatrice and Dave had to wonder why they were not married.

‘They talked it through and decided to take time apart to reflect on the future. They remain friends and the decision to break up was mutual.’

The shocking news was believed to have devastated members of the royal family including sister Princess Eugenie and parents Sarah Ferguson and Prince Andrew.

The Duchess of York, in particular, was said to have felt as though she had lost a son, who she had nicknamed ‘Mr Smiley’.

Speaking at the time another source added: ‘Sarah considers Dave to be part of the family. She is very sad it didn’t work out. They have been together longer than many marriages last.’

Following the breakup, rumours began to circulate that Beatrice’s cousin Prince William did not approve of the relationship and demonstrated his dislike of her partner by refusing to invite him to the Royal Wedding in 2011. 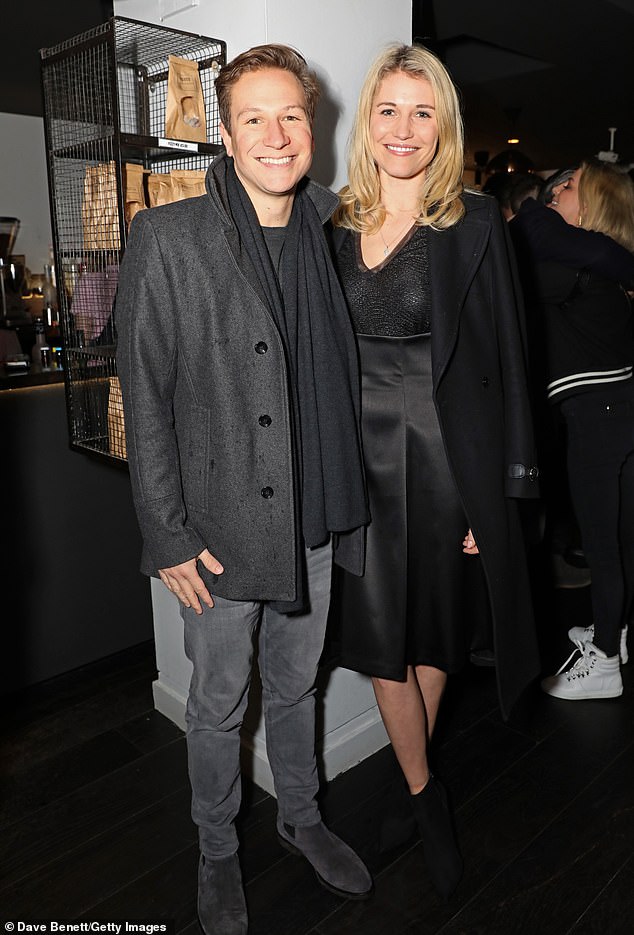 It is believed that with not marriage in sight, Dave (pictured with wife Lynn Anderson) and Beatrice decided to end their relationship

Dave had been studying at Edinburgh University when William was at nearby St Andrews and the two became friends.

However the two men were said to have fallen out several years ago, after William decided Dave was too ‘indiscreet’ to invite to the Royal Wedding.

As Beatrice’s and Dave’s relationship blossomed, it is believed that pressure for Dave to propose mounted following the birth of Beatrice’s niece Princess Charlotte, which pushed Beatrice down to seventh in line to the Throne.

The new arrival meant that according to the Succession of Crown Act Beatrice no longer had to seek permission to marry from the Queen, which requires only the first six in line to seek Royal approval, and left the princess wanting to know where her relationship was heading.

Deciding it was time to address their relationship, a source said that Beatrice decided to speak with Dave about marriage but it backfired because he did not ask her to marry him.

They both agreed that with no marriage in their future, it was time to go their separate ways. 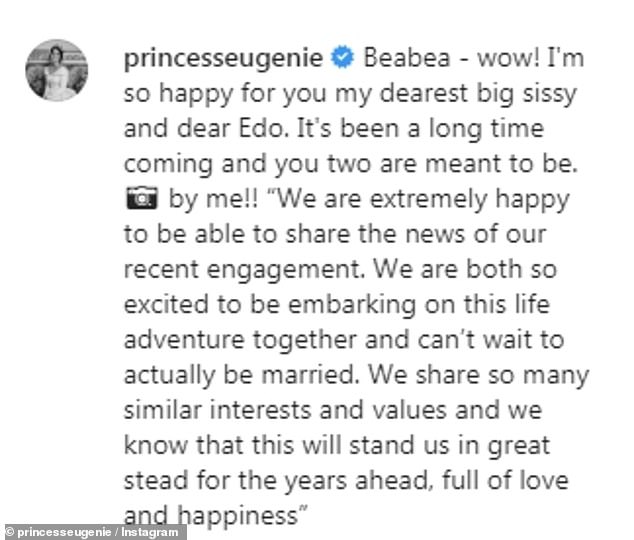 A source said at the time: ‘Beatrice has become a lot more assertive and confident recently. She gave Dave an ultimatum, but it backfired because he did not ask her to marry him. They both agreed that with no marriage in their future, it was time to go separate ways.

‘They had a very co-dependent relationship, so they haven’t yet managed to completely cut off contact. They speak occasionally and they sometimes refer to the split as ‘a break’. But it has been over for a month now and there doesn’t seem to be any reconciliation on the cards.’

Dave went on to marry Lynn Anderson in a lavish ceremony in Puglia, Italy, in front of an all-star guest list including the likes of model Sara Sampaio and Ashton Kutcher.

The pair, who had been dating for two years at the times, met in the US, where Dave is an executive for cab app Uber and she was a director of partnerships and portfolio products at NBC Universal in New York. 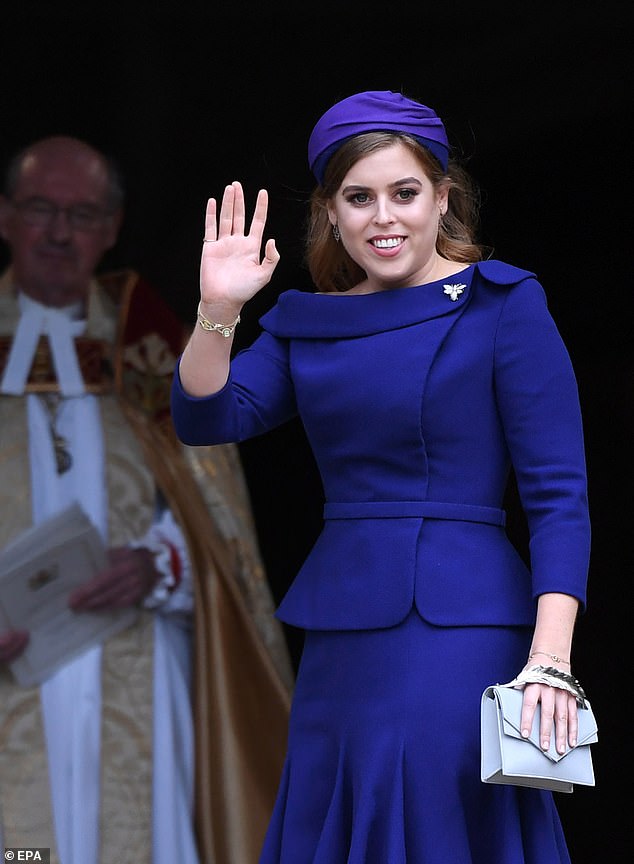 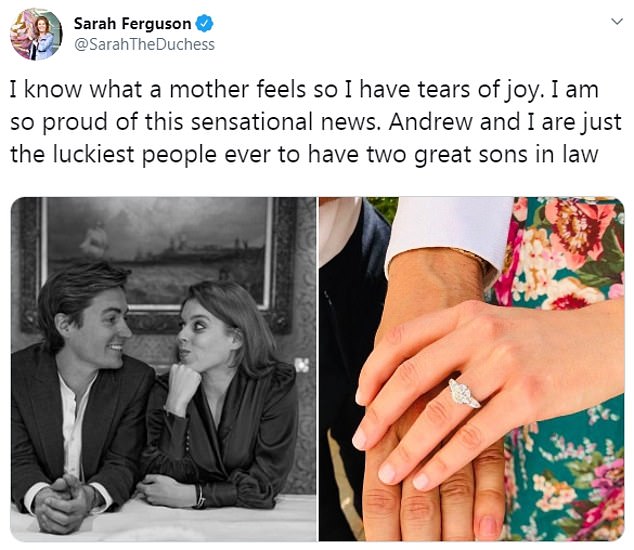 Sharing her joy, Beatrice;s mother Sarah Ferguson said on Twitter: ‘I know what a mother feels so I have tears of joy’ 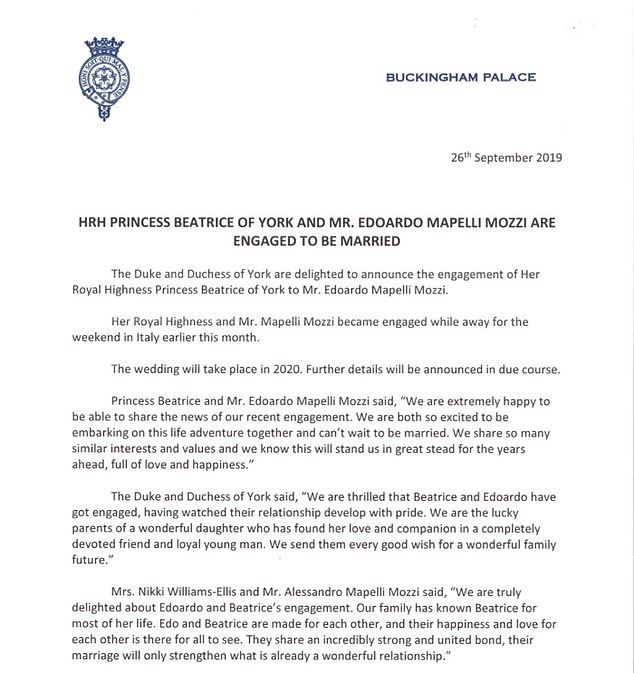 Today in a public statement Beatrice and Mr Mapelli Mozzi said of their 11-month romance: ‘We are extremely happy to be able to share the news of our recent engagement.

Sister Eugenie immediately rushed to share her joy on Instagram with a photograph of the happy couple next to the caption: ‘Beabea – wow! I’m so happy for you my dearest big sissy and dear Edo.

The happy couple got engaged during a romantic trip to Italy this month, which saw them staying in the exclusive cliffside village of Positano, on the Amalfi Coast. 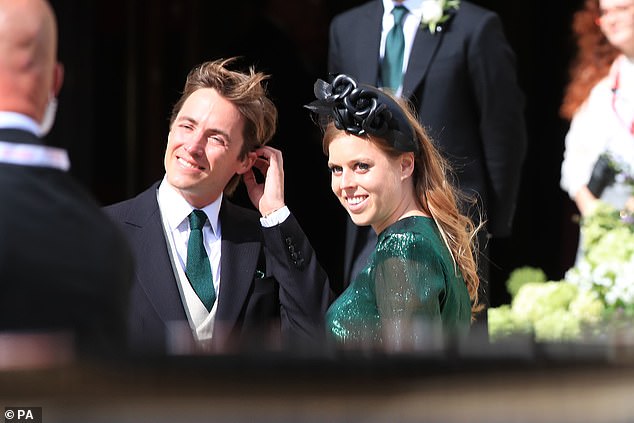