The Happy Mondays’ dancer’s Life on Mars-style police officer father died hours after Paul Ryder passed away in a double heartbreak for the band.

Bassist Paul, 58, was discovered dead in his bed at 6am on Friday July 15 by their mother Linda at her home in Manchester hours before the band was due to play the Kubix Festival in Sunderland. 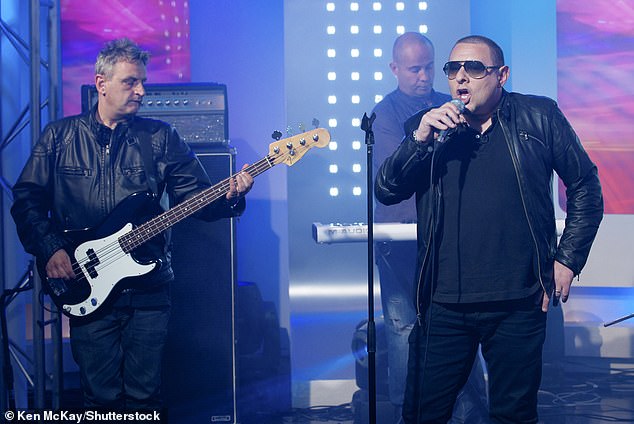 Sad time: Bassist Paul, 58, (left)  was discovered dead in his bed at 6am on Friday July 15 by their mother Linda at her home in Manchester hours before the band was due to play the Kubix Festival in Sunderland (pictured in 2012)

While Bez, also 58, was comforting Shaun, 59, at his house, he got news his dad was seriously ill so left his grieving bandmate to rush to his family home in Blackpool.

His dad – who battled to keep Bez, aka Mark Berry,  on the straight-and-narrow when he was a tearaway teenager and whose dad instilled a love of beekeeping in his son – passed away hours after Paul in the early hours of Saturday.

His funeral took place a week before Paul’s but he was talked about a lot at Paul’s funeral.

A family source told MailOnline: ‘The band have taken two really big hits in the past few weeks. First Paul goes, then Bez had to cope with his dad’s death. 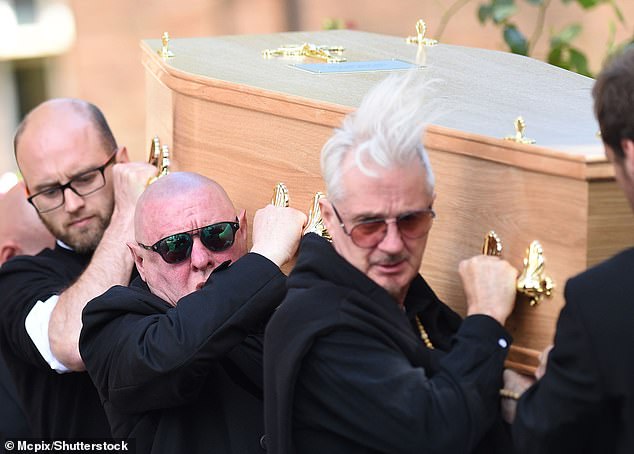 Mourners: The family, friends and old bandmates of Happy Mondays bassist Paul paid tribute to the star bassist and laid him to rest at his funeral on Thursday. Shaun (pictured centre) helped to carry the coffin into St Charles Church in Swinton, Manchester – Bez’s father’s funeral was the week before 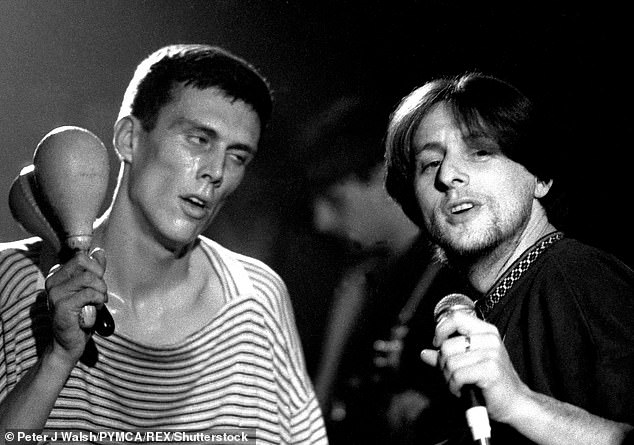 Through thick and thin: The Happy Mondays have turned their lives around after years of publicised wild partying

‘But Bez is really, really private when it comes to his parents and family and he didn’t want to make a big public announcement or make a big show of it.

‘He dealt with his grief quietly while comforting Shaun at the same time.’

Paul was cremated after a funeral service at St Charles Church in Swinton, Manchester, on August 4.

Ian McCulloch, 63, from Echo & The Bunnymen for mourners was his band’s tear-jerking ballad Nothing Lasts Forever – which contains the lines: ‘I need to live in dreams today, I’m tired of the song that sorrow sings… The love that always gets me on my knees.’ 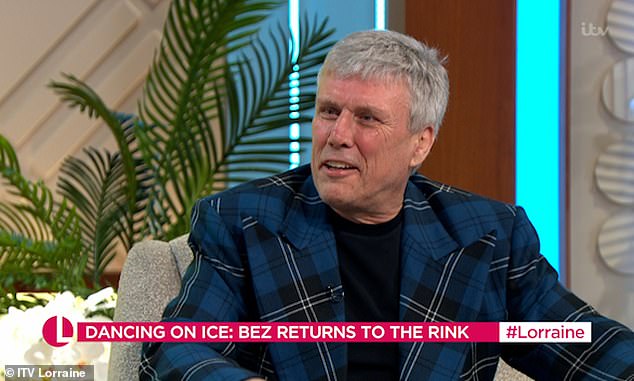 There for him: ‘But Bez didn’t want to overshadow the goodbye to Paul by talking about his dad, and he won’t be giving any interviews about it and doesn’t want to talk about it in public – he sees it as totally private’

The family insider added: ‘The funeral was a big deal, quite rightly, and loads of people there knew about Bez’s dad, so it was really a double-farewell in some ways.

‘Glasses were not only raised to Paul but also to Bez’s dad at the wake.

‘But Bez didn’t want to overshadow the goodbye to Paul by talking about his dad, and he won’t be giving any interviews about it and doesn’t want to talk about it in public – he sees it as totally private.’

The source said Bez is so private when it comes to his parents he doesn’t like giving out his dad’s name.

It is understood the dancer’s father was in his 80s and had been ill for some time before he passed peacefully at home ‘basically from old age’.

The source said: ‘He lived a good life and always did his best by Bez, so it’s just a really sad time for the whole of the Mondays.’

CAN VACCINES MAKE YOU ILL?

Live vaccines, such as the one given to protect against yellow fever, work by injecting a weakened but still living form of the virus into the body.

The purpose of this is to train the body how to make the right antibodies to fight off the virus, so it can remember how to do so in future.

However, if someone’s immune system is weakened – by cancer, pregnancy, HIV or age, for example – it may be unable to destroy even the weakened form of the virus.

If this happens, it’s possible the injected virus can survive, take hold and cause the infection it was intended to prevent.

If this happens the symptoms are usually milder than the real disease.

People who have had live vaccines may also be able to transmit an illness to someone with a weakened immune system, so should stay away from them after the jab.

Live vaccines given in the UK include those for: rotavirus, MMR, flu (nasal only), shingles, chickenpox, tuberculosis, yellow fever and typhoid (oral only). They are all proven to be effective and side effects are rare.

In an exclusive chat with MailOnline from his home in Manchester last week, frontman Shaun that with a lack of answers he had begun to fixate on the Covid vaccine after learning his brother Paul had a booster weeks before his passing.

Shaun’s comments are in sharp contract to the verdict given by the coroner, who said Paul passed away as a result of Ischaemic heart disease and diabetes.

Shaun said: ‘It’s a bit iffy to me – he’s a 50-something-year-old bloke, he’d had a clean bill of health, and he has his booster, flies over here and dies.’

‘We’re going to be waiting two weeks for the autopsy.

‘I don’t think our kid really paid attention to any of that (scare stories about Covid jabs) he just went and had his booster – I think that triggered something.’

Meanwhile, Bez was chucked out of his house as a teen before he went to prison as he fell into crime and had ‘delinquent ways’.

He told The Guardian in 2015 during a rare chat about his past: ‘My early childhood was really happy because I hadn’t fallen into my delinquent ways, so aged one to seven was pretty good. We are from quite a close family; we all visited each other, my grandparents on both sides. It was quite conventional.

‘One of my major problems growing up was my father’s occupation: he was a policeman. So I had a strong authoritarian background, and that was difficult. I became quite unruly.’

Bez added his sister, who is 18 months younger than him, went to Oxford University and works in the City ‘as a high-flying lawyer’ and his mother was an auxiliary nurse.

His dad was a Life on Mars-style chief inspector in the anti-terrorist squad in thg’ adn ‘hard-living.’

After years of wild living and drug taking with Shaun and Co, Bez is now settled and is fanatical about fitness. 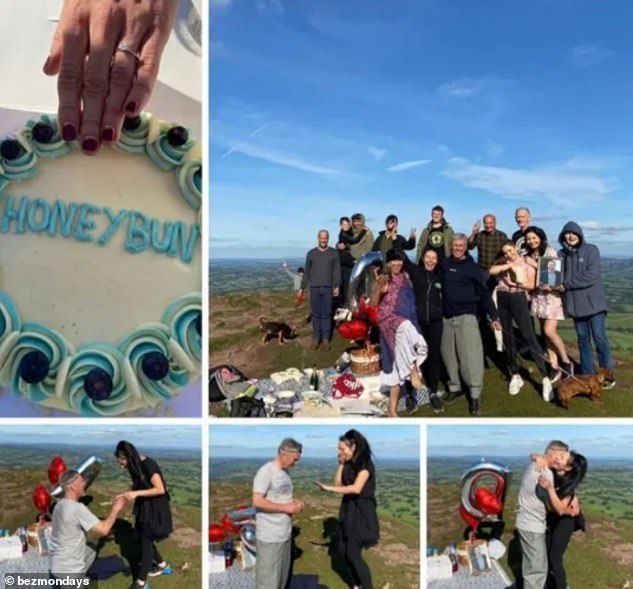 He lives in Herefordshire with girlfriend, Firouzeh Razavi, and has three children, Arlo, 30, Jack, 28, and Leo, 13, plus a grandson, Luca, nine.

He added about his upbringing: ‘I went to live with my grandparents when my parents threw me out. Then I went to prison at the age of 17, to detention centre, and I remained there until I was 20. That – and having kids – made me change how I wanted to live as I didn’t want my kids growing up thinking that was the way to live your life.’

Bez added about his paternal grandfather inspiring him to keep bees: ‘My dad’s dad made me into a honey monster. He fought against Rommel in Africa, then spent the rest of the war in Italy.

‘The only thing he came home with was these tins of honey, and, ever since, it has been an integral part of our family’s life. Every time I have honey, I always think of my grandad.’