Scientists are developing a suit to monitor the happiness and stress levels of astronauts.

The suit has a network of wireless sensors that detect tiny changes in the wearer’s physical state and adjust the environment accordingly.

Small adjustments to temperature, light and oxygen levels can be made to improve their mental well-being.

Scientists are developing a suit to monitor the happiness and stress levels of astronauts. The suit has in-built sensors (pictured) that can record information about mental well-being and can adjust its environment to increase happiness

Researchers at the Florida Polytechnic University have developed the technology, which could be fitted into next-generation spacesuits.

Current technology exists to take these measurements but they tend to be cumbersome and uncomfortable.

The S3 will be an active technology that will merge into an existing suit and provide a stream of constant information.

As well as changing its environment based on these readings, it will allow physicians on Earth to monitor the bodily systems of the astronauts wearing the suit.

Space is an extremely demanding environment and takes a significant toll on the body, with astronauts contending with zero-gravity, claustrophobia, sleep deprivation and a lack of exercise. 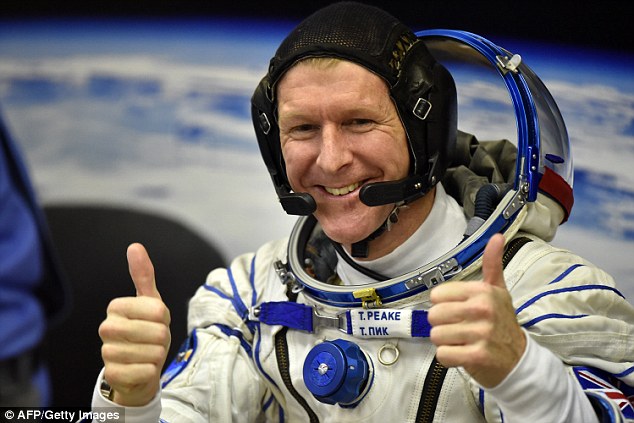 Astronauts, such as Commander Tim Peake, are under intense stress and scrutiny in space. Astronauts have to contend with zero-gravity, claustrophobia, lack of sleep and a lack of exercise which can lead to depression

The demanding schedule can come at a cost to astronauts orbiting the planet, taking a heavy toll on their mental and physical health.

Professor Arman Sargolzaei at the Florida Polytechnic University is working on the happy suit project.

He said: ‘It’s vital for astronauts to be mentally healthy during missions and right now there’s no active, real-time solution to help them when they feel stressed or anxious.

‘This technology would provide them with immediate relief to their state of mind.’

As well as Nasa, several other companies would be interested in the suit.

A method of monitoring the health of space-travellers is likely to be of interest for organisations such as SpaceX and Virgin Galactic that hope to send tourists in to space.

With a ticket costing millions of pounds, the well-being of travellers will be a high-priority for the companies.

‘This project started as an assignment when I was a freshman, and I never expected it to grow the way it has,’ said James Holland, a student at Florida Polytechnic who is involved in the project.

‘I’m excited to see what we can accomplish as our research continues.’

THE EFFECT OF MICROGRAVITY ABOARD THE ISS

Microgravity is the condition in which people or objects appear to be weightless.

The effects of microgravity can be seen when astronauts and objects float in space.

In microgravity, astronauts can float in their spacecraft, or outside, on a spacewalk. Heavy objects move around easily. For example, astronauts can move equipment weighing hundreds of pounds with their fingertips.

Microgravity is sometimes called ‘zero gravity’, but this is misleading.

The International Space Station orbits Earth at an altitude between 200 and 250 miles.

At that altitude, Earth’s gravity is about 90 percent of what it is on the planet’s surface.

Astronauts and objects float there because they are in free fall.

Gravity pulls on the space station and, as a result, it is constantly falling toward Earth’s surface.

In a vacuum, gravity causes all objects to fall at the same rate.

The mass of the object does not matter.

If a person drops a hammer and a feather, air will make the feather fall more slowly, but if there is no air, they fall at the same acceleration.