Angry crowds of anti-Brexit protesters are targeting Conservative MPs at their constituency offices and homes after hardcore leftist group Momentum issued a call to arms to bring down the Government.

Dozens of demonstrators held a rally outside Cheltenham MP Alex Chalk’s office this afternoon, where they hounded the politician until he came out and tried to calm them down.

Mr Chalk – who is the Parliamentary Private Secretary to Foreign Secretary Dominic Raab – told his constituents the message sent out by suspending Parliament was ‘wrong’.

The MP – who voted remain – was met with roars of cheers when he joked: ‘What can you do, bring down the government?’.

He said he had ‘always’ been in favour of a ‘compromise solution’ and warned those who ‘insist on absolute victory risk absolute defeat’.

Police confirmed officers were braced for a large presence outside Jacob Rees-Mogg’s home in Somerset this evening after plans of a protest circulated on social media.

Nine campaigners gathered briefly outside the MP’s country home at 7.30pm before being moving on by police.

By 8pm, dozens of banner-waving demonstrators had moved to his constituency office in Midsomer Norton.

Momentum’s National Coordinator Laura Parker earlier announced plans for the group to grind the streets of the UK to a standstill in protest against Boris Johnson’s decision to suspend Parliament and hamstring MPs’ attempts to thwart a No Deal. 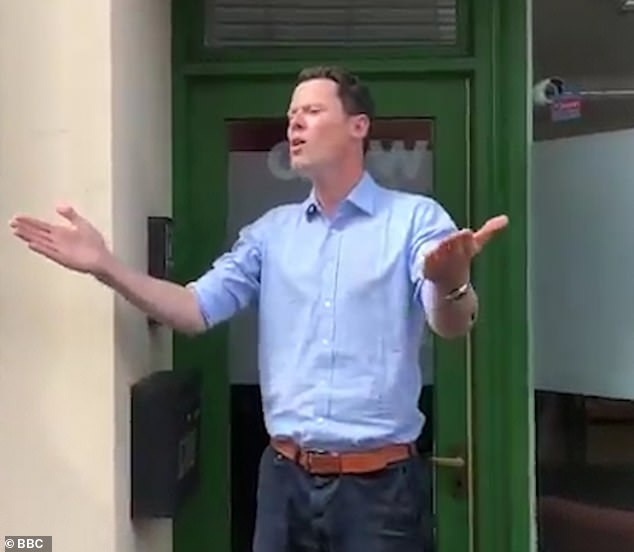 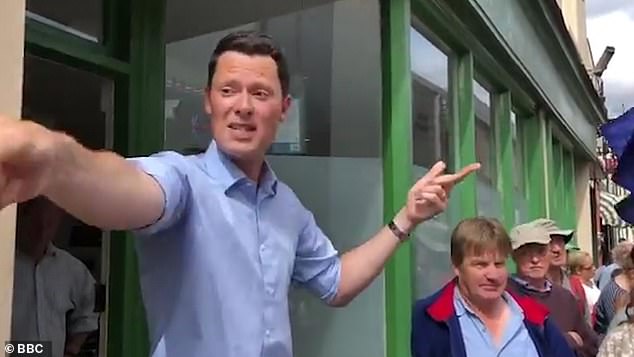 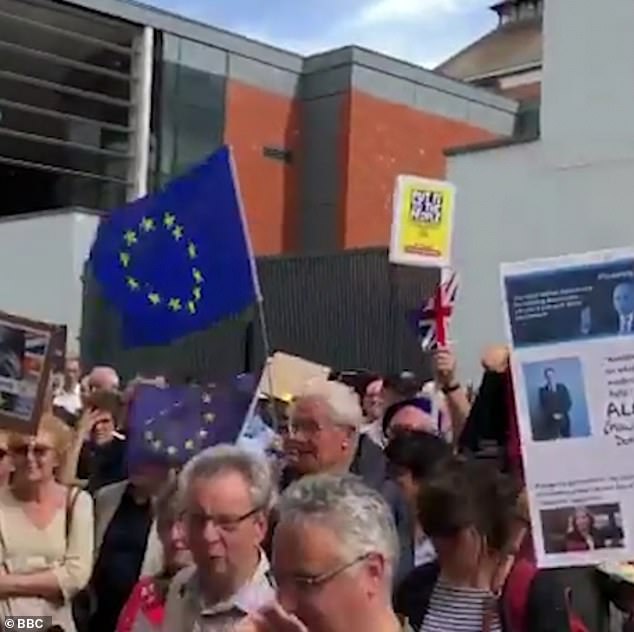 The crowd reportedly cheered when Mr Chalk – who voted Remain – joked: ‘What can you do, bring down the government?’

In an extraordinary escalation of the Remain anger which has been bubbling up in the wake of the Prime Minister’s request to prorogue, Miss Parker vowed to join an occupation of the roads surrounding the Palace of Westminster.

Momentum, which emerged out of Jeremy Corbyn’s 2015 party leadership victory, will mirror the tactics employed by Extinction Rebellion by gumming up the transport systems in cities across the country.

Announcing the nationwide movement, Ms Parker said: ‘Eton educated, millionaire Boris Johnson is stealing our democracy so he can sell off our NHS to big US corporations in a no deal, Trump first Brexit.

‘This is an establishment coup by a tiny, privileged elite who have been eroding our democracy for decades.

‘Real power doesn’t sit with the Queen or in parliament. It’s with us, the people – and that’s why we need to take action.’

She added: ‘There are thousands of us who will join an occupation of Parliament and block the roads before we let Johnson close the doors on democracy.

‘Today we’re going to contact all Momentum supporters and encourage them to protest, occupy and blockade on Saturday.

‘Our message to Johnson is this: if you steal our democracy, we’ll shut down the streets.’

It comes after Jeremy Corbyn announced he will launch a formal bid on Tuesday to stop a No Deal Brexit and prevent the suspension of Parliament. 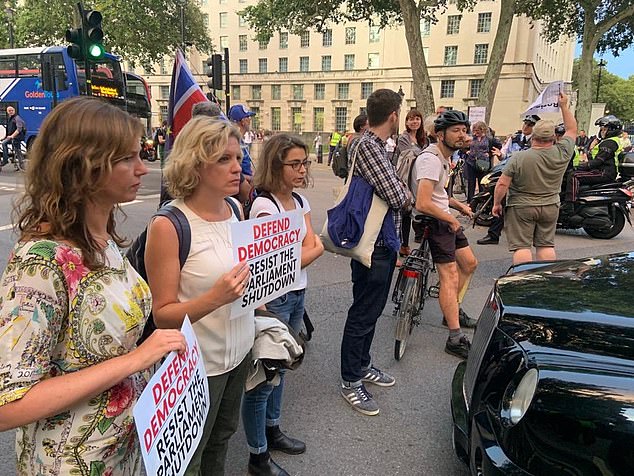 In an extraordinary escalation of the Remain anger which has been bubbling up in the wake of the Prime Minister’s request to prorogue, National Coordinator Laura Parker (second from left) vowed to join an occupation of the Palace of Westminster. 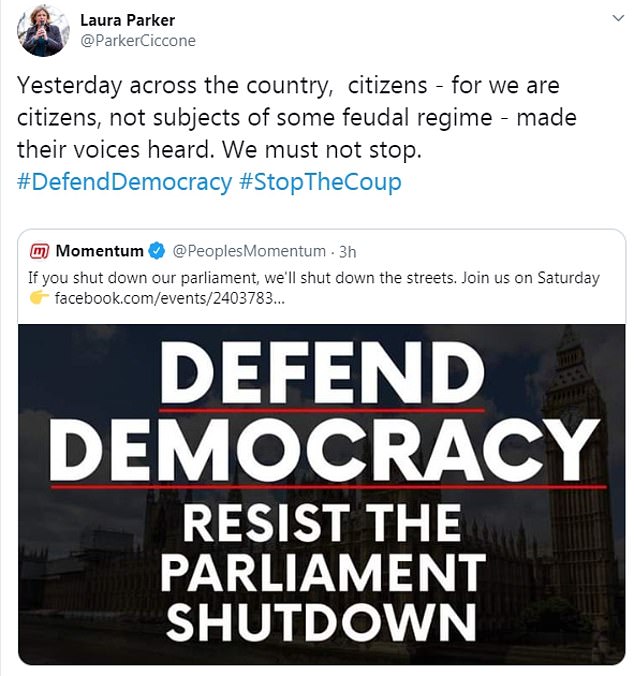 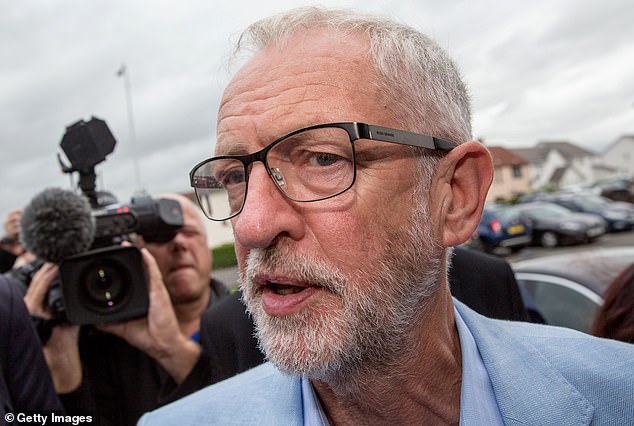 Jeremy Corbyn, pictured in Dunfermline today, has promised to launch a bid to block a No Deal Brexit on Tuesday 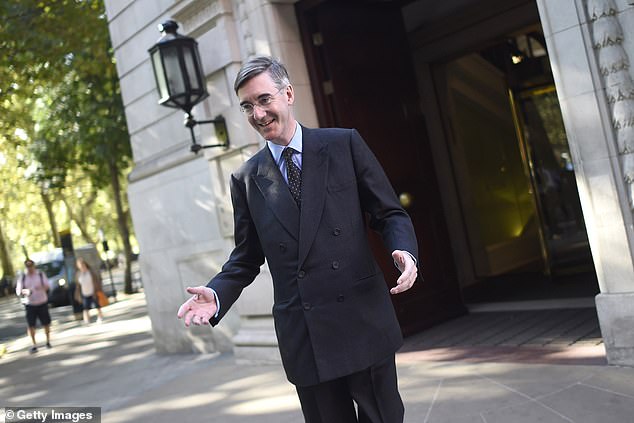 Mr Rees-Mogg, pictured in Westminster this morning, said MPs would have to show ‘courage and gumption’ if they are to stop Boris Johnson’s Brexit plan

The Labour leader said he would kickstart a bid to block a chaotic split from Brussels on the first day that MPs return from their summer holidays.

He confirmed that he will try to seize control of proceedings in the House of Commons in order to pass a law to force the PM to secure a Brexit delay from the EU in the event the two sides do not have an agreement in place by the October 31 deadline.

It is unclear exactly how Mr Corbyn intends to reverse Mr Johnson’s decision to prorogue Parliament for five weeks in September and October but his comments set the scene for all out war in the Commons next week.

Mr Corbyn said this afternoon: ‘What we are going to do is try to politically stop him on Tuesday with a parliamentary process in order to legislate to prevent a No Deal Brexit and also to try and prevent him shutting down Parliament in this utterly crucial period.’

Mr Corbyn’s comments came after Jacob Rees-Mogg told Remain-backing MPs they had two ways of stopping a No Deal Brexit: Pass a law to stop the UK leaving the EU without an agreement on October 31 or try to topple the government.

He appeared to taunt Europhile MPs when he delivered his extraordinary challenge as he suggested they did not have the ‘courage or the gumption’ to act.

The Prime Minister stunned the nation yesterday as he secured permission from the Queen to prorogue Parliament at some point in the week beginning September 9 until October 14.

The plan to ramp up demonstrations against the government follows yesterday’s mass rally in Parliament Square.

Momentum is now calling for further demonstrations across the country on Saturday and on Tuesday when Parliament reconvenes. 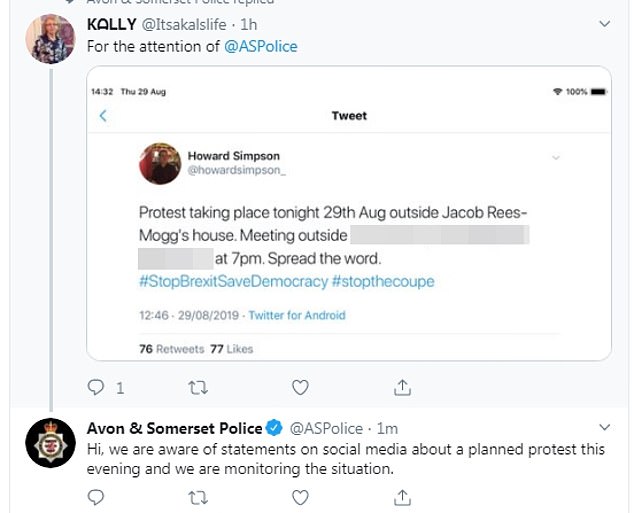 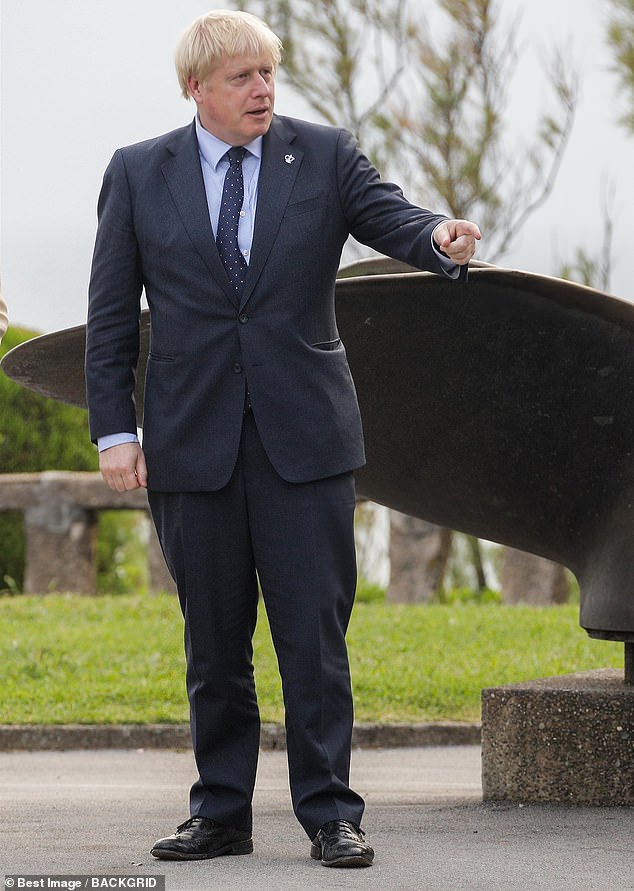 As grassroots campaigners geared up to take to the streets, Mr Corbyn confirmed he will try to seize control of proceedings in the House of Commons

The ongoing fallout from Mr Johnson’s big gamble continued today as Ruth Davidson, the leader of the Scottish Tories, quit her post at least in part because of her opposition to the PM’s Brexit stance.

Meanwhile, Lord Young, a government whip, also resigned as he said he was ‘very unhappy at the timing and length of the prorogation’.

Mr Johnson has promised to take Britain out of the bloc on October 31 ‘do or die’ and with or without a deal but his preference remains leaving with an agreement.

The premier was accused of behaving like a ‘tinpot dictator’ by angry MPs yesterday but Mr Rees-Mogg said Mr Johnson had done nothing wrong as the Commons Leader laid out his challenge to them.

He told the BBC: ‘All these people who are wailing and gnashing of teeth know that there are two ways of doing what they want to do.

‘If they don’t have either the courage or the gumption to do either of those then we will leave on the 31st of October in accordance with the referendum result.’

But Mr Rees-Mogg said the British constitution is ‘a robust and flexible one’ which can ‘bend to the passing storm as it has done over previous centuries’.