Hardened London Underground commuters have complained after new green platform markings have ruined there ‘competitive advantage’ at being first on trains.

The trial marking scheme at Kings Cross on the Victoria line platform was designed as a pathway to be kept clear for Tube users exiting trains so they could quickly leave the station.

But commuters say it actually shows the best places to stand to board trains because it reveals exactly where the doors will end up when the service stops.

Commuters have hit out at green markings at Kings Cross Underground Station, pictured, designed to reduce congestion because they ‘show the best place to stand to get on trains’

Fellow Underground users are in agreement after sharing his Tweet more than 2,000 times, while others have left comments supporting his stance.

One Twitter user wrote: ‘I feel your pain That was the one advantage…and now its gone (sic).’

Another said: ‘The only possible solution is to buy green paint and paint the entire platform green #problemsolved’

And another quipped: ‘Totally unfair, I am furious… How do I impress tourists and dates alike with my tube prowess now??’

Mr Ayers did concede the scheme was ‘probably a sensible thing to trial for a station with lots of tourists’ in a later post on Twitter.

The green markings were introduced in July to initial confusion, until posters were put up explaining the situation. 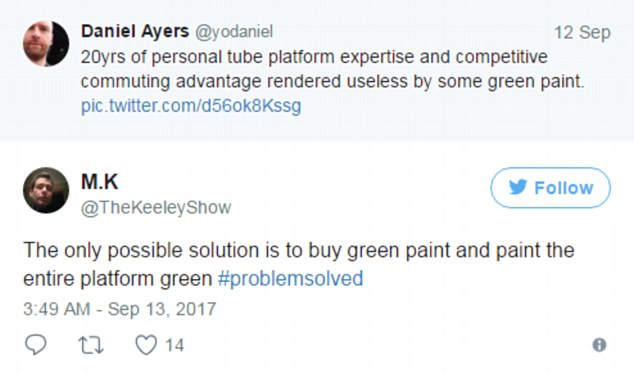 Others agreed with him and voice their support as his Tweet was shared more than 2,000 times

Signs tell commuters not to stop in the lanes to ‘reduce congestion’.

A spokesman for Transport for London said the trial was one of many ways the body was looking at reducing congestion.

The spokesman said: ‘It’s a visual cue to get people to walk all the way along the platform and to show you where the doors open. It’s about reducing congestion.

‘Quite often in peak times, passengers, they congregate at the entrance to the platform. On the Jubilee line for example, you don’t have that because people wait in front of the safety barriers.’

TfL said the full results of the trial will be collated in October.