MIAMI (AP) – Bryce Harper hit his NL-leading 16th home run Sunday and the Washington Nationals completed a three-game sweep by beating the Miami Marlins for the 11th time in a row, 5-2.

The Nationals matched the longest winning streak in franchise history against one team. It’s the Marlins’ longest losing streak against an opponent since 1999.

Harper struck out eight times in the series but pulled a pitch from left-hander Jarlin Garcia onto the concourse leading off the sixth inning. Anthony Rendon hit his fifth home run for the Nationals, who lead the league in homers.

Washington Nationals’ Bryce Harper (34) tosses his bat after striking out during the first inning of a baseball game against the Miami Marlins, Sunday, May 27, 2018, in Miami. (AP Photo/Lynne Sladky)

Harper added a sacrifice fly in the seventh. Wilmer Difo had a double and a triple, and 19-year-old newcomer Juan Soto doubled for his fourth extra-base hit in seven games.

Stephen Strasburg (6-4) pitched five shutout innings and contributed his first RBI of the season, but departed after throwing 103 pitches. He has thrown 23 consecutive scoreless innings against the Marlins, and improved his record against them to 16-7 in 29 starts.

Brandon Kintzler pitched around a single in the ninth for his second save. The Nationals have outscored the Marlins 71-20 in their past 11 meetings.

Miami’s Justin Bour hit his 10th homer, but mostly it was another dismal offensive effort by the Marlins, who rank last in the majors in runs, home runs, slugging and OPS.

Washington hit for the cycle against Elieser Hernandez (0-2), who allowed two runs in five innings in his third career start.

The Nationals improved to 17-8 on the road, best in the NL, and continue their 10-game trip in Baltimore beginning Monday.

When Strasburg batted with a runner at first and nobody out in the third in a scoreless game, he swung at the second pitch and grounded into a double play. Trea Turner then bunted with two out and was thrown out.

Nationals: 2B Daniel Murphy, recovering from offseason surgery on his right knee, and OF Brian Goodwin (left wrist) played seven innings each Saturday in their first rehab games at Double-A Harrisburg. Both are scheduled to take Monday off, and they’re expected to play at least a couple of entire games before joining the Nationals. … RHP Ryan Madson (chest strain) is expected to throw a bullpen session soon and may not need a rehab stint.

Nationals: LHP Gio Gonzalez (5-2, 2.38 ERA) is scheduled to start Monday against the Orioles.

Marlins: LHP Caleb Smith (3-5, 3.83 ERA) is scheduled to start Monday when Miami begins a 10-game trip with a four-game series at San Diego. 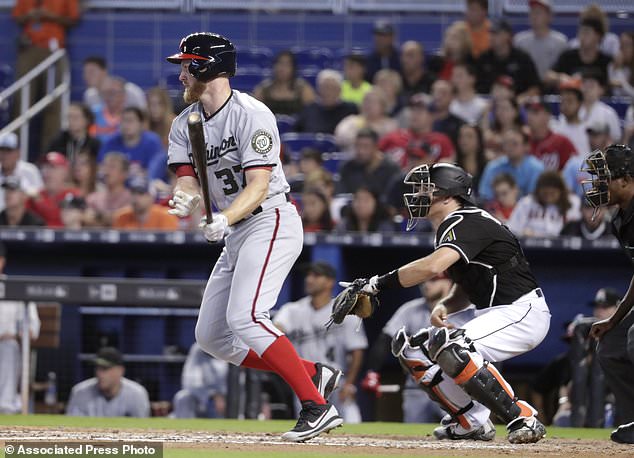 Washington Nationals’ Stephen Strasburg (37) watches after hitting a RBI single to score Wilmer Difo during the fifth inning of a baseball game against the Miami Marlins, Sunday, May 27, 2018, in Miami. At right is Miami Marlins catcher J.T. Realmuto. (AP Photo/Lynne Sladky) 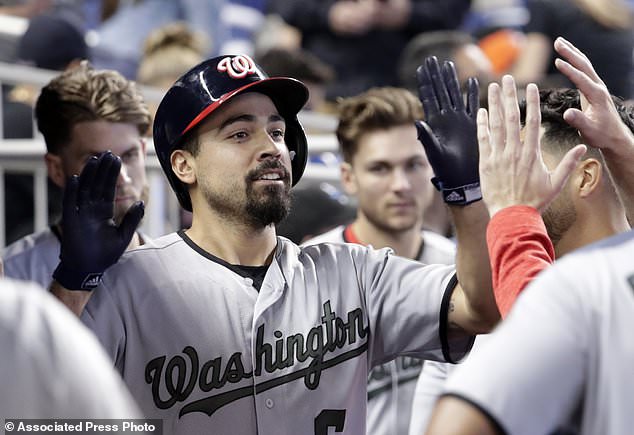 Washington Nationals’ Anthony Rendon is congratulated in the dugout after hitting a solo home run during the fourth inning of a baseball game against the Miami Marlins, Sunday, May 27, 2018, in Miami. (AP Photo/Lynne Sladky) 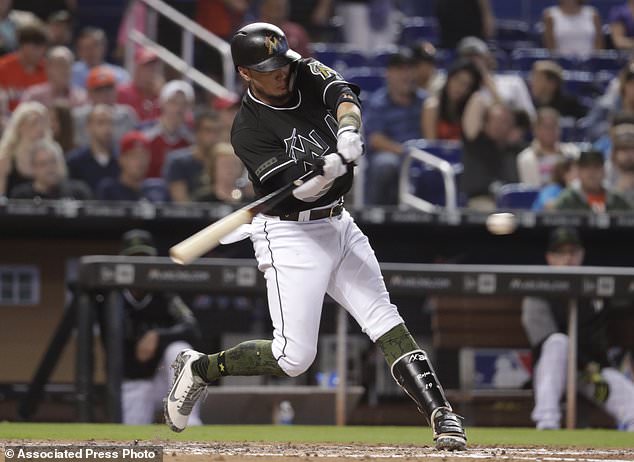 Miami Marlins’ Miguel Rojas hits a single during the fourth inning of a baseball game against the Washington Nationals, Sunday, May 27, 2018, in Miami. (AP Photo/Lynne Sladky)