Kamala Harris has been deemed the clear winner of Thursday night’s Democratic debate – while front-runner Joe Biden floundered under attack from each of the other nine candidates.

California Senator Harris came out swinging and captivated the stage early on when she told her squabbling competitors: ‘America does not want to witness a food fight! They’re wondering how we’re going to get food on their tables.’

Throughout the rest of the two-hour debate, Harris delivered a string of poignant responses to questions ranging from income inequality to immigration to health care to race relations in America.

The debate reached a fever pitch as Harris confronted Biden about his recent nostalgia about a pair of segregationist Democratic senators, and vilified him for opposing federal intervention decades ago to desegregate America’s schools through forced bussing. 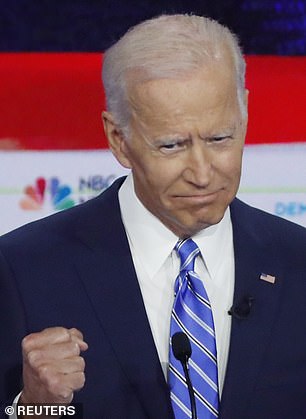 ‘It was hurtful to hear you talk about the reputations of two United States senators who built their reputations and career on the segregation of race in this country,’ she said, referring to Biden’s gauzy remembrances of Mississippi Sen James Eastland and South Carolina Sen Fritz Hollings.

‘And it was not only that, but you also worked with them to oppose bussing,’ she continued, revealing that she was part of the second class of black students to integrate the public schools in Berkeley, California.

Biden insisted that the Berkeley City Council, not the US Senate, was responsible – but stammered to explain why he opposed federal government intervention at the time.

Defending his half-century-long record on voting rights, a flustered Biden ultimately threw up his hands and blurted: ‘My time’s up. I’m sorry.’

After the debate he accused Harris of mischaracterizing his views on the subject, rattling off a legislative history of times in the Senate when he had defended the power of federal courts to step into desegregation fights. 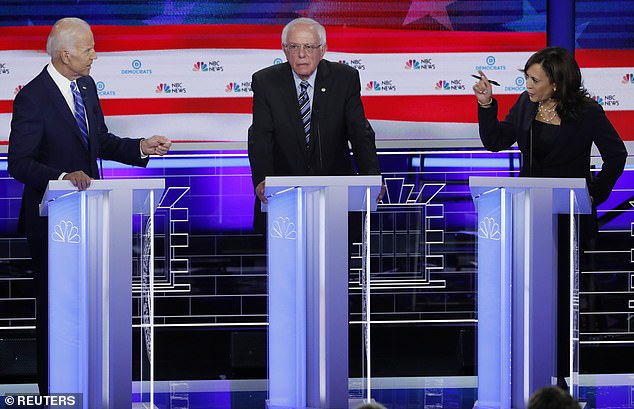 Harris vilified Biden for his recent nostalgia about a pair of segregationist Democratic senators and for opposing federal intervention decades ago to desegregate America’s schools through forced busing. Standing between the two stars of the debate was fellow front-runner Vermont Sen Bernie Sanders, who had a rather unremarkable night

Biden entered the night with the most at stake, a moderate front-runner who has lost ground drop-by-drop to his more aggressively liberal rivals.

He took up the most air time overall with 13 minutes and 18 seconds, according to CNN, followed by Harris with 12 minutes and nine seconds.

‘Joe Biden may be a front-runner but he sure didn’t look like it at the Democratic debate last night,’ Roxanne Jones, founding editor at ESPN Magazine, wrote in an analysis for CNN.

‘He looked tired, deflected direct questions early on and no matter what he did, could not handle the fire that Kamala Harris threw at him: questions about why he opposed school busing in the 70s, or, why he continues to tout his ability to compromise back in the day with his racist, segregationist colleagues.’

Frank Luntz shared similar insights on Twitter, writing: ‘In just about every way imaginable, Kamala Harris dominated. She had the guts to take on and embarrass Joe Biden – not only did she have the best language, she was the most memorable.’

He continued: ‘No, Joe Biden did not make any mistakes tonight… But he was not prepared for the direct attacks from his opponents. He knew they were coming, but he mishandled them. For that, he is tonight’s loser.’

Commentators noticed that Biden stuck near the stage after the debate concluded rather than venturing into the crowd with the rest of the candidates. 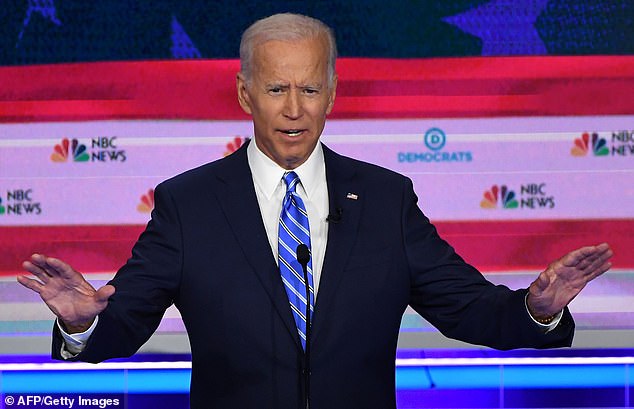 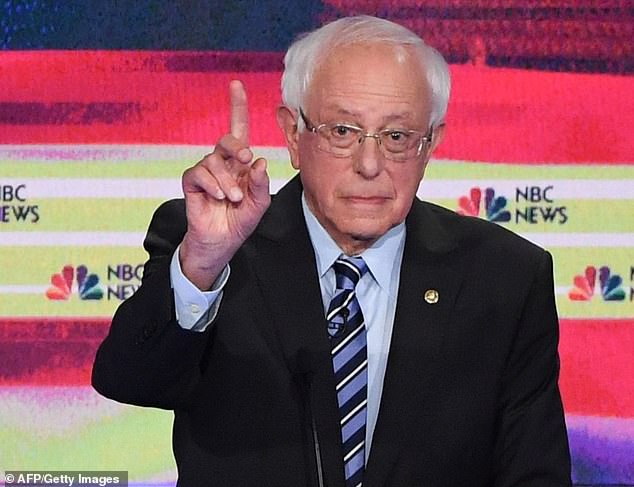 In his analysis for The Palmer Report, political blogger Bill Palmer wrote that ‘early moderator questions seemed squarely aimed at scandalizing Joe Biden while setting up Bernie Sanders for an easy win – but the candidates themselves quickly threw the moderators’ game plan out the window’.

Palmer praised Harris for ‘hitting every question out of the park’ and said Vermont Sen Sanders ‘did little with his softball questions’.

Overall, pundits seem to agree that Sanders had a much easier night than experts anticipated given his strong second-place standing in the polls.

‘Sanders is lucky that Biden has been so bad,’ Cillizza tweeted. ‘It will cover over — somewhat — his own decidedly weak performance.’

While moderate Biden stood firmly in the middle of the road, Sanders steered left into socialism with promises of wealth redistribution and government-run health care.

He took aim at Donald Trump early on, calling the president a ‘phony’, a ‘pathological liar’ and a ‘racist’. 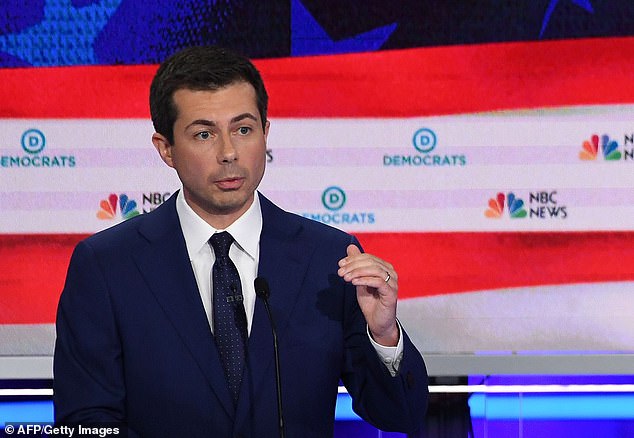 South Bend, Indiana Mayor Pete Buttigieg was one of the most composed candidates on the stage throughout the night.

His biggest moment came when he was asked about a police-related shooting in his hometown – a topic he’s struggled to address in the past.

On June 16, a South Bend police officer shot and killed 54-year-old black resident Eric Logan while responding to reports that a man was breaking into cars with a knife. The officer’s body camera was turned off at the time.

‘The police force is six percent black in a city that is 26 percent black. Why has that not improved over your two terms as mayor?’ moderator Chuck Todd asked.

‘Because I couldn’t get it done,’ Buttigieg replied candidly.

CNN commentator David Axelrod, who had previously criticized Buttigieg’s response to the issue, said after the debate: ‘His answer tonight connected much more effectively. Once again, he took responsibility for his failure as mayor to fully address the underlying issues. But he also spoke of the incident in very human terms; of the man who was killed, his family and the impact on his community.’

Buttigieg also delivered strong answers on foreign policy issues. When the candidates were asked how they would handle trade with China, the mayor said: ‘We have to recognize that the China challenge is a serious one. This is not something to dismiss or waive away.

‘China is using technology for the perfection of dictatorship. Manufacturers and especially farmers are hurting. Tariffs are taxes and Americans pay $800 more a year because of the tariffs. Meanwhile, China is investing so they could soon be able to run circles around us in artificial intelligence and this president is fixated on the relationship as if all that mattered was the balance on dishwashers.

‘We have a moment when their authoritarian model is an alternative to ours because ours looks so chaotic because of internal divisions. The biggest thing we have to do is invest in our own domestic competitiveness.’

Addressing the immigration crisis, Buttigieg earned points when he called out Republicans’ ‘moral hypocrisy’ on the issue.

‘For a party that associates itself with Christianity, to say that … God would smile on the division of families at the hands of federal agents, that God would condone putting children in cages has lost all claim to ever use religious language again,’ he said.

Cillizza agreed, writing: ‘Buttigieg has lots and lots of natural political ability – and it shone through on Thursday night.’ 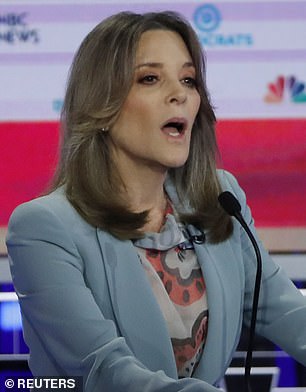 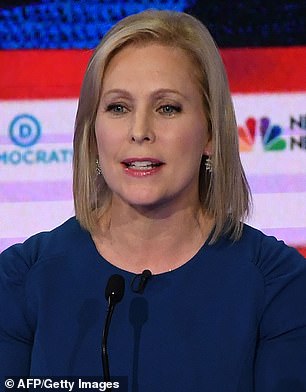 New York Sen Kristen Gillibrand had a lot to say on Thursday night, but didn’t manage to snag any significant soundbites.

Palmer said the senator ‘tried way too hard to position herself as Bernie’s running mate’.

Marianne Williamson entered into this debate with very little exposure but certainly made an impression – albeit not a great one.

The self-help author ‘came across as half awake and gave flaky answers while seemingly using a different accent each time she spoke’, Palmer wrote, noting that she is ‘in danger of being the new Ben Carson’.

Cillizza also had some harsh commentary on Williamson, writing: ‘Watching the author and spiritual adviser on the debate stage reminded me of my own experience playing high school basketball: Hopelessly out of her league.

‘It’s not that Williamson isn’t a politician, it’s that she had zero idea how to navigate a crowded debate stage and make her points. It was also problematic that she didn’t seem to have any, you know, points.’

Williamson’s best moment came during her closing statement when she said: ‘Mr President, if you’re listening, I want you to hear me please: You have harnessed fear for political purposes, and only love can cast that out. So I, sir, I have a feeling you know what you’re doing. I’m going to harness love for political purposes. I will meet you on that field, and sir, love will win.’

Social media was flooded with dozens of memes inspired by her performance before the debate even ended. 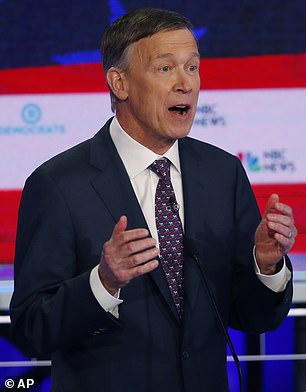 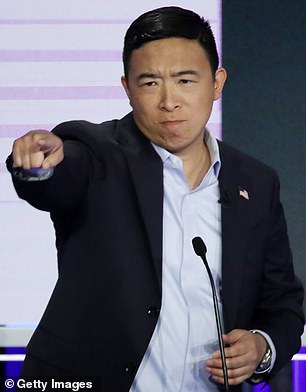 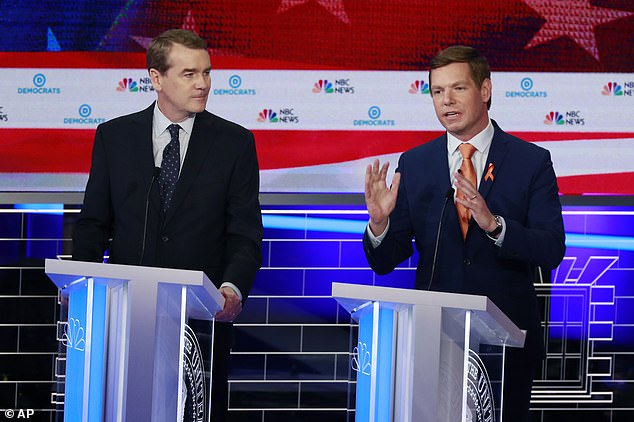 Swalwell’s biggest moment came when he called out Biden’s age, noting that he was six years old when the former veep said during a California Democratic Convention speech that it was ‘time to pass the torch to a new generation of Americans.’

‘Joe Biden was right when he said that 32 years ago. He is still right today,’ 38-year-old Swalwell said.

Biden replied that at age 76, ‘I’m still holding on to that torch.’

Palmer wrote: ‘Swalwell probably gained supporters tonight, if only because he came into the night polling at zero percent.’

Cillizza deviated from many of his pundit peers in picking Bennet as one of the night’s winners.

‘Look, I don’t think that the Colorado senator is somehow going to shoot from 1% to relevance in the polls based on his performance in this debate. He wasn’t that good. But, for someone who a) no one knew going into this debate and b) had limited speaking opportunities to make his case, I thought Bennet performed well,’ he wrote.

‘Bennet’s incredulity with Biden’s belief that Senate Majority Leader Mitch McConnell would start working in a bipartisan way if the former vice president won the White House felt genuine — and was powerful.

‘In short: Bennet came out of this debate looking better than he went into it. Which is a win.’

Former tech executive Yang had the least amount of speaking time at two minutes and 56 seconds, but he drew attention on social media for his decision to forgo a neck tie.

‘John Hickenlooper probably didn’t help himself. Andrew Yang might as well not have been there. This field is too darn large,’ Palmer lamented.

He added: ‘This night was ugly enough, you could argue that Elizabeth Warren won tonight’s debate by virtue of not having been in it.’