A heart wrenching image has captured the moment a koala discovered her joey dead in the river before burying her head in her fur.

The image was taken on Wednesday on Kangaroo Island, south of Adelaide, and shows the joey lying dead in the shallows of the water.

In the picture the mum can be seen with her head pressed into her fur.

The charred forest floor on Kangaroo Island is littered with corpses of animals incinerated by the blazes that swept through two weeks ago.

The surviving koala was rescued by wildlife carers from the Humane Society’s Animal Rescue team as the picture was taken.

Humane Society International sent a team to the island to help rescue wildlife from the scorched area after one-third of the island was destroyed.

Almost half of Kangaroo Island has been razed by fire and an estimated 80 percent of koala habitat wiped out.

HSI’s senior specialist in disaster response Kelly Donithan told One Green Planet the scenes she faced on the island were devastating.

‘These are some of the toughest scenes I’ve ever witnessed as an animal rescuer: the bodies of charred animals as far as the eye can see,’ she said.

‘But as we set out each day on search and rescue, we’re still finding animals alive, injured, dazed or traumatised, and it’s such a relief to be able to give them immediate life.’

Steven Selwood, South Australia Veterinary Emergency Management team leader at the hospital, says around 46,000 koalas were thought to be on the island before this year’s bushfires.

It is estimated as few as 9,000 remain, Selwood says, describing the figure as ‘pretty devastating’. 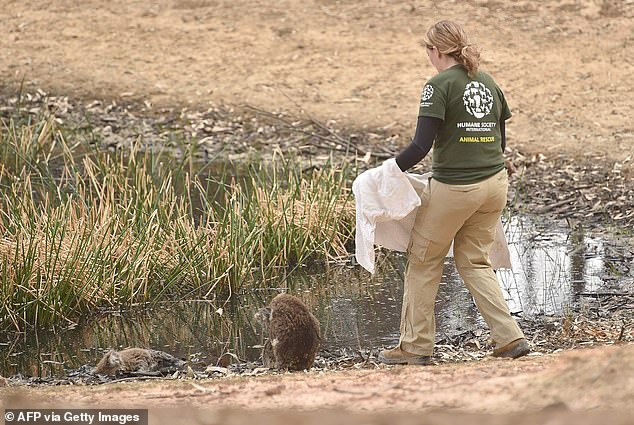 ‘The fires here were particularly ferocious and fast-moving so we’re seeing a lot less injured wildlife than in other fires,’ he said.

‘A lot of the wildlife was incinerated.’

Australian Environment Minister Sussan Ley said the country’s koala population had taken an ‘extraordinary hit’ as a result of bushfires that have raged for months.

She suggested they could be listed as ‘endangered’ for the first time.

Kangaroo Island is the only place in Australia where the population is entirely free of chlamydia — a sexually transmitted infection also found in humans that is fatal to koalas.

That has made them a key ‘insurance population’ for the future of the species — and even more crucial now that large numbers have died in bushfires on the Australian mainland.

This widespread destruction has left rescuers with a tricky proposition — what to do with the animals once they have recovered.

For now, that issue is on the back burner as teams of vets work overtime to save as many as possible.

‘He’s going to need another week (to recover) and will need to be kept caged after that,’ Hutchinson tells AFP as he wraps a pink bandage around Number 64’s paw.

‘Because there’s no habitat for him to go back to at this time.’ 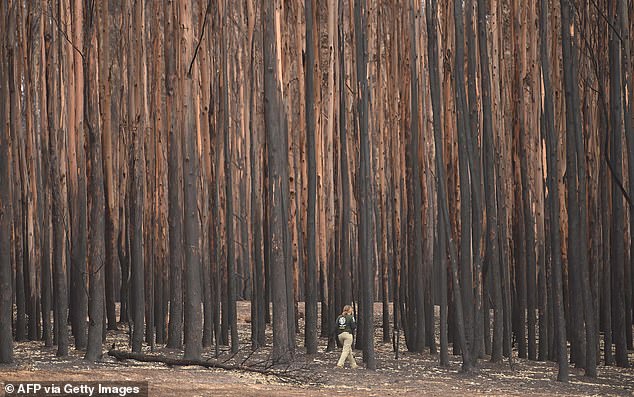 Experts estimated Kangaroo Island had a population of around 46,000 koalas on the island but after the devastating bushfires some estimate the population is now as low as 9,000