A ‘harrowing’ report into a string of maternity failings at a scandal-hit NHS trust will be published tomorrow.

Staff at the East Kent Hospitals University NHS Foundation Trust have been warned to brace for ‘harrowing’ details.

It is expected to describe how newborn babies died needlessly due to poor care spanning several years.

The report is also expected to reveal how families were often ignored or had their concerns overlooked, while valuable lessons were not learned by the trust.

East Kent Hospitals University NHS Foundation Trust admitted failures in the case of Harry Richford (pictured above, with his parents Tom and Sarah Richford), who died days after his emergency delivery in November 2017 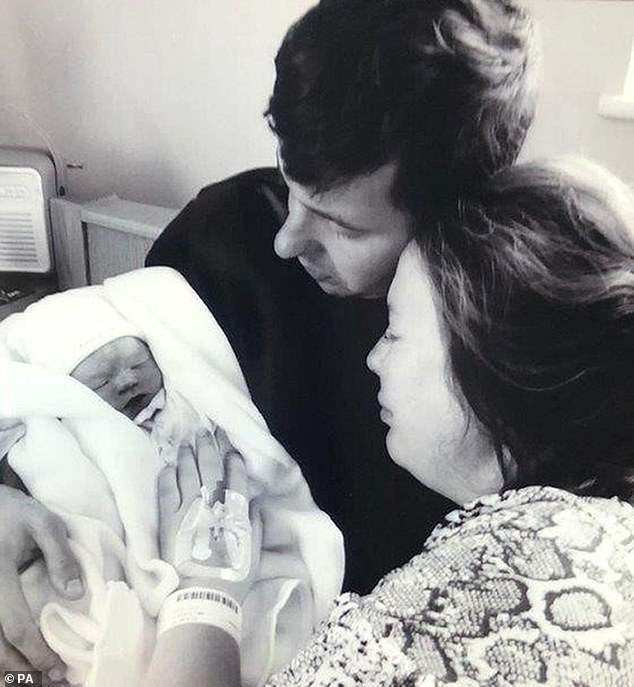 Families of babies who received poor care at the trust will be the first to read the findings. Among them are expected to be the parents of Archie Batten, who died in September 2019 at the QEQM. Pictured, Rachel Higgs and Andrew Batten with Archie 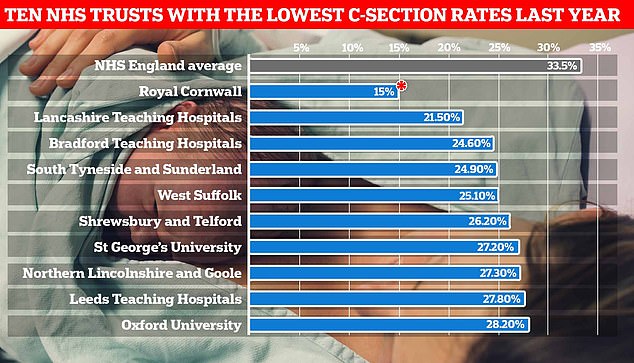 Pictured above are the ten NHS Trusts with the lowest C-section rates over the year to March 2021, the latest available. There were five trusts that had lower C-section rates than Shrewsbury and Telford which was at the centre of the biggest maternity scandal in Britain. A devastating five-year inquiry ruled that the trust’s obsession with ‘normal births’ contributed to failings. *Official NHS data reports the rate at Royal Cornwall at 15 per cent, but the trust disputes these statistics

If a baby dies before 24 weeks of pregnancy, it is known as a pregnancy loss.

The chief executive of East Kent Hospitals University NHS Foundation Trust sent an email to staff ahead of the publication of the report, which was delayed following the Queen’s death.

Tracey Fletcher warned colleagues to expect a ‘harrowing report which will have a profound and significant impact on families and colleagues, particularly those working in maternity services’.

Dr Bill Kirkup, who also chaired the investigation into mother and baby deaths in Morecambe in 2015, has led the review involving more than 200 families.

East Kent runs major hospitals, with its main maternity services at the Queen Elizabeth The Queen Mother Hospital (QEQM) in Margate and the William Harvey Hospital in Ashford.

The family of baby Harry Richford, who died a week after his birth at the QEQM in 2017, have long campaigned for answers after saying their concerns were repeatedly brushed aside by hospital managers.

The trust was fined £733,000 last year for failures in Harry’s care after he suffered brain damage.

A previous inquest ruled his death was ‘wholly avoidable’ and found more than a dozen areas of concern, including failings in the way an ‘inexperienced’ doctor carried out the delivery, followed by delays in resuscitating him.

One midwife described ‘panic’ during attempts to resuscitate Harry, while a staff nurse said the scene was ‘chaotic’.

Following Harry’s death, the East Kent Trust recorded his death as ‘expected’ and did not inform the coroner.

Only the efforts of Harry’s family eventually brought his death to the attention of coroner Christopher Sutton-Mattocks.

Last October, the Care Quality Commission (CQC), which inspects hospitals, again expressed concerns over the trust, which it has repeatedly ranked as ‘requires improvement’.

It said that during unannounced inspections in July 2021 there were not enough midwifery staff and maternity support workers to keep women and babies safe.

Inspectors said staff were feeling exhausted, stressed and anxious, while some community midwives had taken on additional work in the acute units, which meant they were sometimes working 20-hour days. 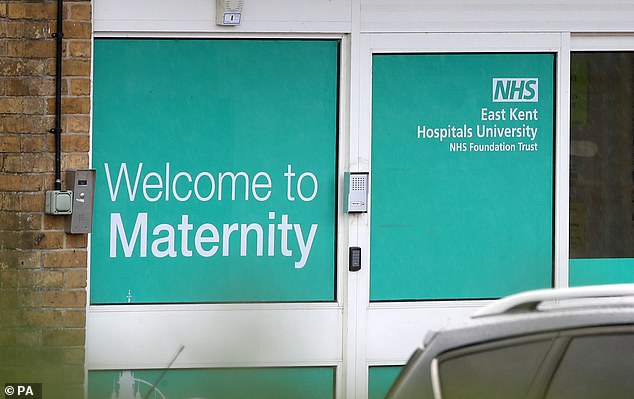 One of the babies, who was born art East Kent Hospitals University NHS Foundation Trust, lived for five days before being classified as a stillbirth

In 2020, the Healthcare Safety Investigation Branch (HSIB), which investigates NHS harm, detailed how, despite repeated warnings from its investigators, improvements were not made to maternity care at the trust.

The HSIB began working with East Kent’s maternity units in 2018 and identified ‘recurrent safety risks’ including over how CTG readings were interpreted, baby resuscitation, recognition of deterioration in mothers and babies, and the willingness of staff to escalate their concerns to more senior medics.

From December 2018, the HSIB said it ‘engaged frequently’ with the trust about its concerns but kept seeing the same things happening.

In August 2019, it asked the trust to self-refer to the CQC and regional health bosses.

The families of babies who received poor care at the trust will be the first to read the findings of Dr Kirkup’s inquiry.

Among them are expected to be the parents of Archie Batten, who died in September 2019 at the QEQM.

A coroner ruled he died of natural causes ‘contributed to by neglect’ and ‘gross failure’.

How baby Harry died just seven days into his life

After arriving at hospital on November 2, 2017, Mrs Richford was given a drug to speed up labour over a period of 10 hours – a decision which was criticised by the coroner, because it hyper-stimulated Harry.

She was rushed to theatre for an emergency caesarean after Harry began to show signs of distress, and medics tried to deliver with forceps before performing an emergency section.

Harry should have been delivered within 30 minutes, but was instead delivered after some 92 minutes. 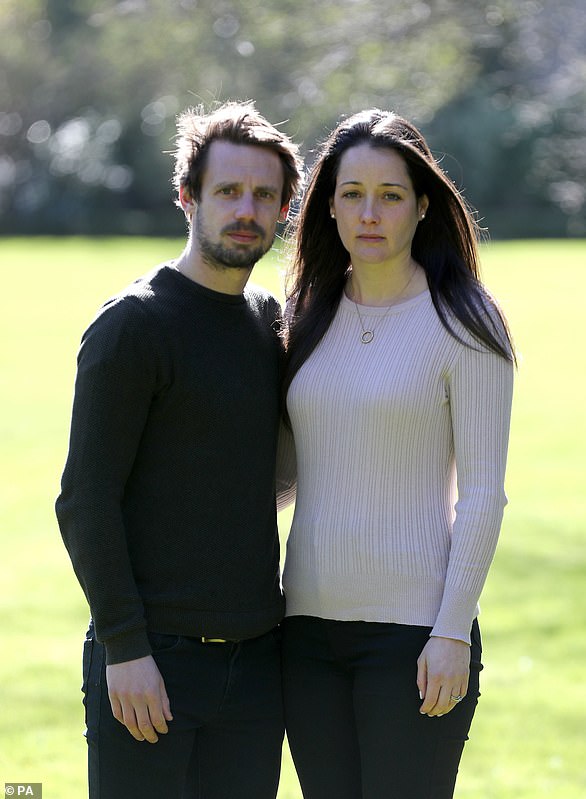 Locum registrar Dr Christos Spyroulis, described by the coroner as ‘inexperienced’, delivered Harry at 3.32am.

It emerged in the inquest that there was no record of the doctor being assessed, and he had said that he was not asked about his level of experience.

Staff nurse Laura Guest had described the scene as ‘chaotic’, adding she ‘didn’t feel it was being strongly led’.

Resuscitation began after Harry was born ‘silent and floppy’ and not moving.

Harry died on November 9 after his life support was removed.