A family are terrified for the life of their beloved grandmother who contracted Covid while in a Sydney hospital, as they recall hearing people crying out in agony on her heartbreaking video chats.

Peggy and Sam Pozoglou are worried about the physical and mental health of Sam’s grandmother Christy Katehos, 83, who is trapped in a Covid ward in Sydney’s Royal Prince Alfred hospital after she caught the virus at Canterbury hospital.

‘I don’t want to remember her as I saw her in the Zoom last night. Confined to that hospital, with no family members, with some patients yelling in pain in the background,’ grandson Sam said.

It comes amid repeated warnings that Sydney’s hospitals will become overwhelmed with patients when lockdown ends, with 244 people with Covid currently in ICU.

Due to the hospitals isolating Covid patients in order to prevent the spread of the virus, the family is not allowed to see Ms Katehos and they claim basic services such as cleaning and access to a proper shower are being impacted.

‘Every day that I call my grandmother, her spirits and positivity have diminished significantly. She’s describing to me over the phone, “Sam, the hygiene in this hospital is the worst by far, I’ve ever seen in my life in Australia”,’ Sam said.

Ms Katehos, who doesn’t speak much English, was getting fluid drained from her lung at Canterbury hospital where it was discovered she also had breast cancer, which has spread throughout her body.

She then contracted Covid from another patient from the hospital and was transferred to the Covid ward at RPA.

Peggy Pozoglou said that the doctor was crying on the phone when she was told of her mother’s condition.

Ms Pozoglou was told that her mother would not be provided with a ventilator if she needed one because her cancer was so far gone that she has no chance of surviving.

‘That’s what they’ve said to me, so, and now I’m just waiting thinking that, am I ever going to see my mother, ever again,’ Ms Pozoglou told A Current Affair. 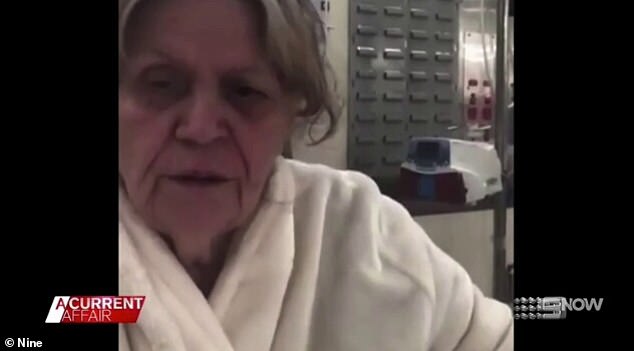 Ms Katehos does not speak much English, with the family claiming basic services such as cleaning are being impacted due to staff being overworked and the isolation process 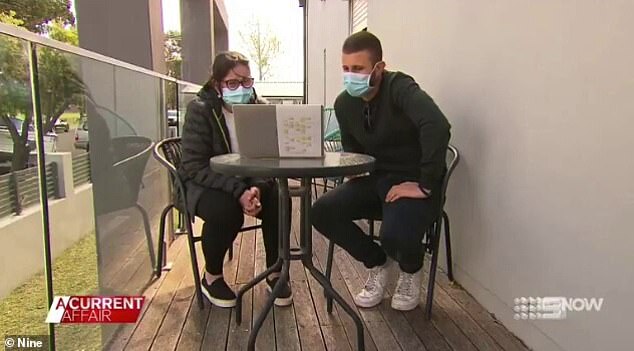 Ms Pozoglou said her mother may not receive a ventilator if she requires one because her breast cancer is so far gone she wouldn’t survive (pictured, zooming her mother in hospital)

In NSW, there are more than 1,266 people diagnosed with Covid in hospital. 244 people are in intensive care and 118 people require ventilators to breathe.

A further ten deaths were reported on Wednesday.

Healthcare workers are under enormous amounts of pressure, with many being pushed to breaking point as health officials say the worst is yet to come once the state opens up.

Australian Paramedic Association delegate Brett Simpson said that many patients are often waiting 30 to 60 minutes before an ambulance is even able to attend to their call. 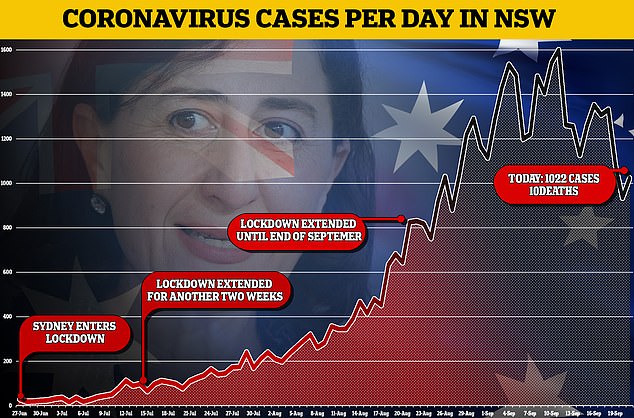 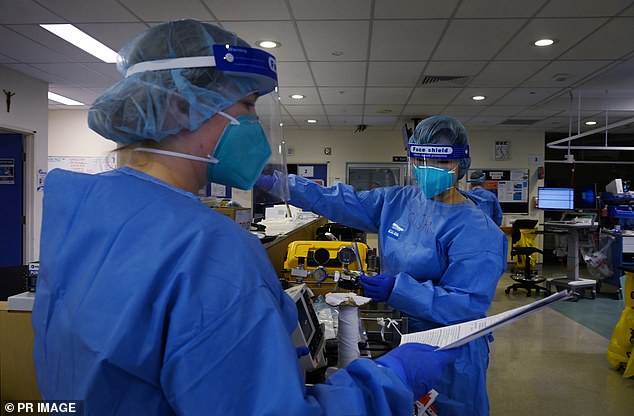 There are currently more than 1266 people with COVID-19 in hospital in NSW, 244 people in intensive care and 118 on ventilators (pictured, ICU staff at St Vincent’s Hospital in Sydney)

‘Worst case scenario for us is, we see a worsening in the conditions. You know, we’re already seeing people literally dying in their lounge rooms from Covid and other non-Covid related illnesses because they’ve had to wait so long for treatment,’ he remarked.

The latest figures show that 15 per cent of all cases of Covid have been hospitalised since the start of the outbreak. That is at least 4,142 patients.

The union says healthcare workers are overstretched with the city’s healthcare system struggling in the three months before the latest Covid wave hit.

During these three months, there were 329,709 ambulance responses for life-threatening jobs in NSW alone which is the highest ever since 2010. 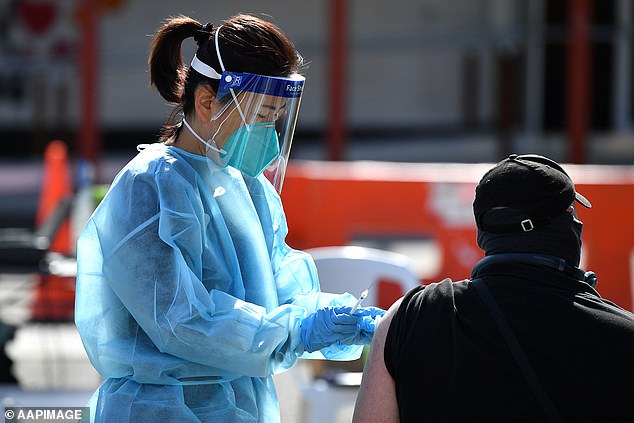 The union says healthcare workers are under enormous amounts of pressure, with the system struggling before the current outbreak of Covid (pictured, workers at a vaccine hub in Sydney on Tuesday)

Ambulances arrived in less than 15 minutes for less than half of those jobs, the lowest result in a decade.

Mr Simpson says this result is the most unsatisfying the union has ever had and remarked that healthcare workers are worried for when the state will begin to open up again because cases are set to soar once again.

‘We are begging the public not only for their own safety, but for the health of the ambos, and the nurses, and the doctors that are treating them and the system itself. We need people to be vaccinated to try and prevent the tsunami of patients that’s heading our way,’ he said.

Amanda Gulasi is all too familiar with the state of the healthcare system after she contracted the virus a few weeks ago after believing in anti-vaccination conspiracy theories. 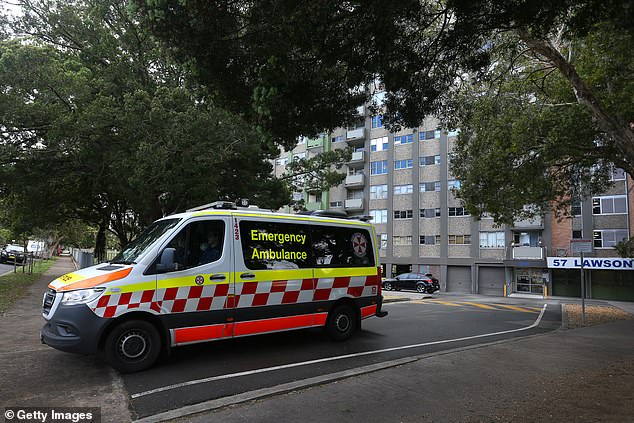 Australian Paramedic Association delegate Brett Simpson said patients are having to wait 30 to 60 minutes for an ambulance because of the demand they are in (pictured, an ambulance in Redfern)

After getting so sick, she called triple zero but claims that while one paramedic arrived and helped her initially, she had to wait five hours for an ambulance.

She spent three nights in hospital.

She begged residents to stay at home if they can because the system is already so busy and under so much pressure.

Julie Trimarchi also told the program her Covid positive neighbour called triple zero four times in a week to be taken to hospital, only to be brought back home only hours later.

She warned others to only use the system if they really need it when there are others needing urgent care.

A spokesperson from Sydney Local Health District released a statement regarding Ms Katehos’ situation saying NSW Health is constantly monitoring hospital capacity and ensuring strategies are in place to make ICU capacity available during this period.

‘All patients on COVID-19 wards needing assistance to shower are offered bed baths as the water pressure and heat from a shower can result in the aerosolisation of viral-loaded droplets, putting other patients and staff at risk. Sheets are always changed regularly for all patients,’ the statement reads. 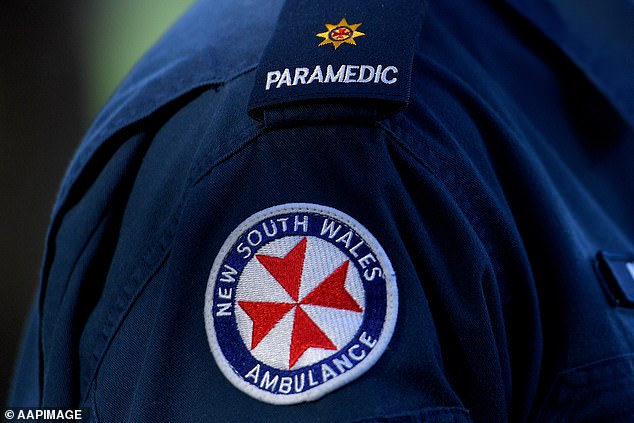 Residents have warned others to only use ambulances and healthcare services if they really need them because the system is already stretched so thin (pictured, a paramedic in Sydney)