The Duke and Duchess of Sussex have arrived in a township often described as South Africa’s ‘murder capital’ amid high security, while their son Archie stays behind with his nanny.

Harry and Meghan are visiting Nyanga in the Cape Flats just outside of Cape Town today for the first stop on their 10-day tour of Africa, where one in 206 people are killed each year, according to recent statistics.

The couple’s visit to the troubled township has been arranged amid a major security presence, with details kept secret until the last minute to prevent unrest and four-month-old Archie left behind at their residence with his nanny.

School children supported by the charity Justice Desk were there to greet the royal couple as they arrived this afternoon.

The Sussexes knelt down to shake hands with Nyanga youngsters, with Harry unable to resist dancing with one boy and his wife Meghan giving him a big hug.

Harry and Meghan (pictured greeting school children) are visiting Nyanga in the Cape Flats just outside of Cape Town today where one in 206 people are killed each year, as the first stop on their 10-day tour of Africa 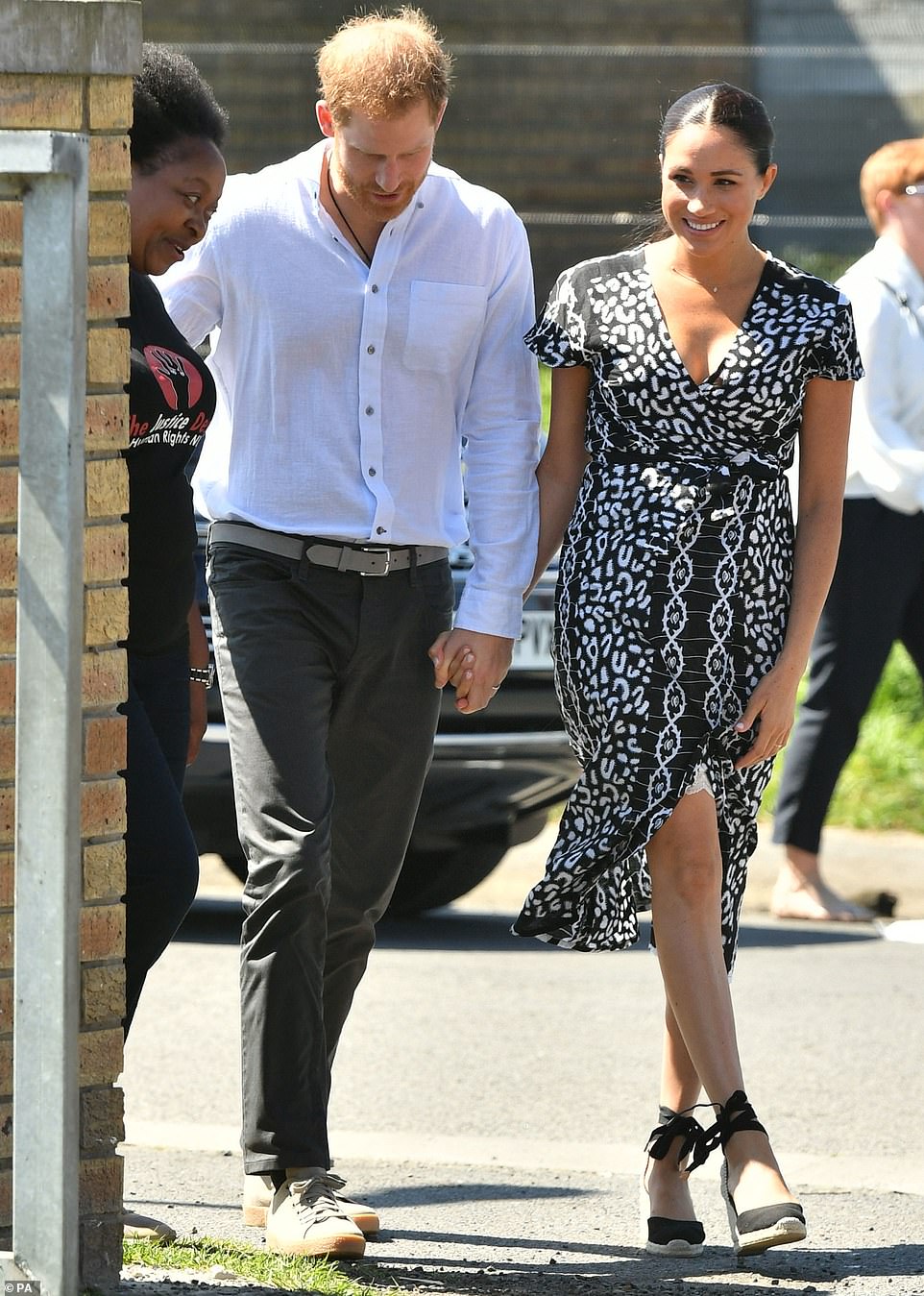 Harry and Meghan are pictured arriving in Nyanga, near Cape Town today, often referred to as South Africa’s ‘murder capital’ 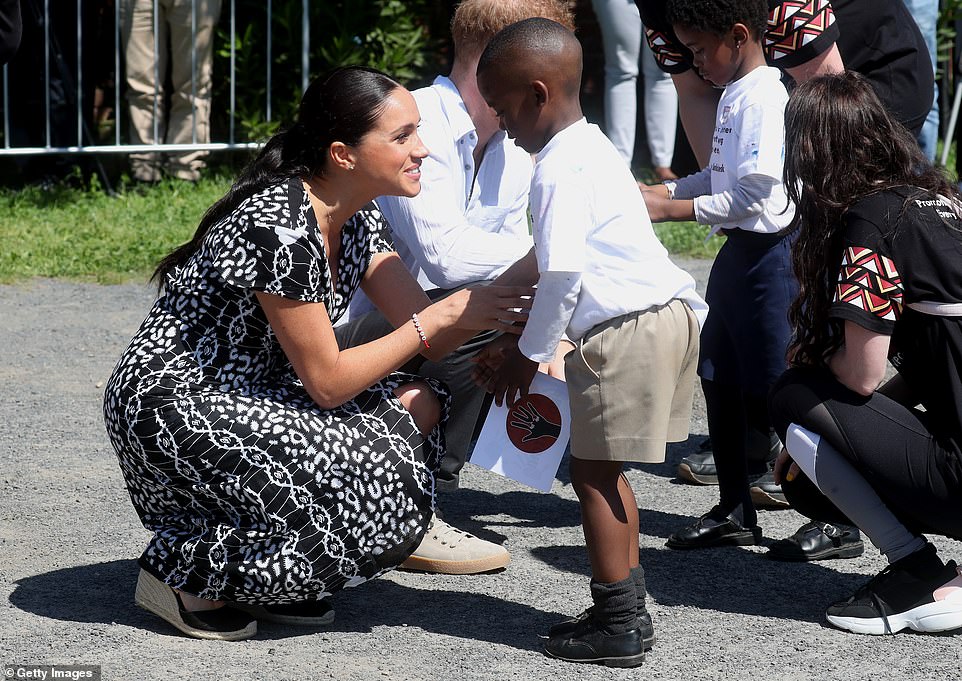 Meghan is pictured crouching down to greet a schoolboy who lives in Nyanga, Cape Town’s most dangerous township

Beaming, Meghan, 38, was pictured carrying four-month-old Archie, who sported an adorable bobble hat for the occasion. The young royal bore a striking resemblance to his father, who was pictured wearing a similar hat in the arms of his mother, Diana.

Harry, 34, yesterday said he ‘couldn’t wait’ to introduce his son to Africa ahead of the trip this morning.

Nyanga, whose name means ‘moon’ in the local dialect of Xhosa, is one of the oldest black townships in Cape Town and was established in 1946 as a result of the migrant labour system.

Nowadays, unemployment is well above 50 per cent and HIV/Aids is a huge community issue. 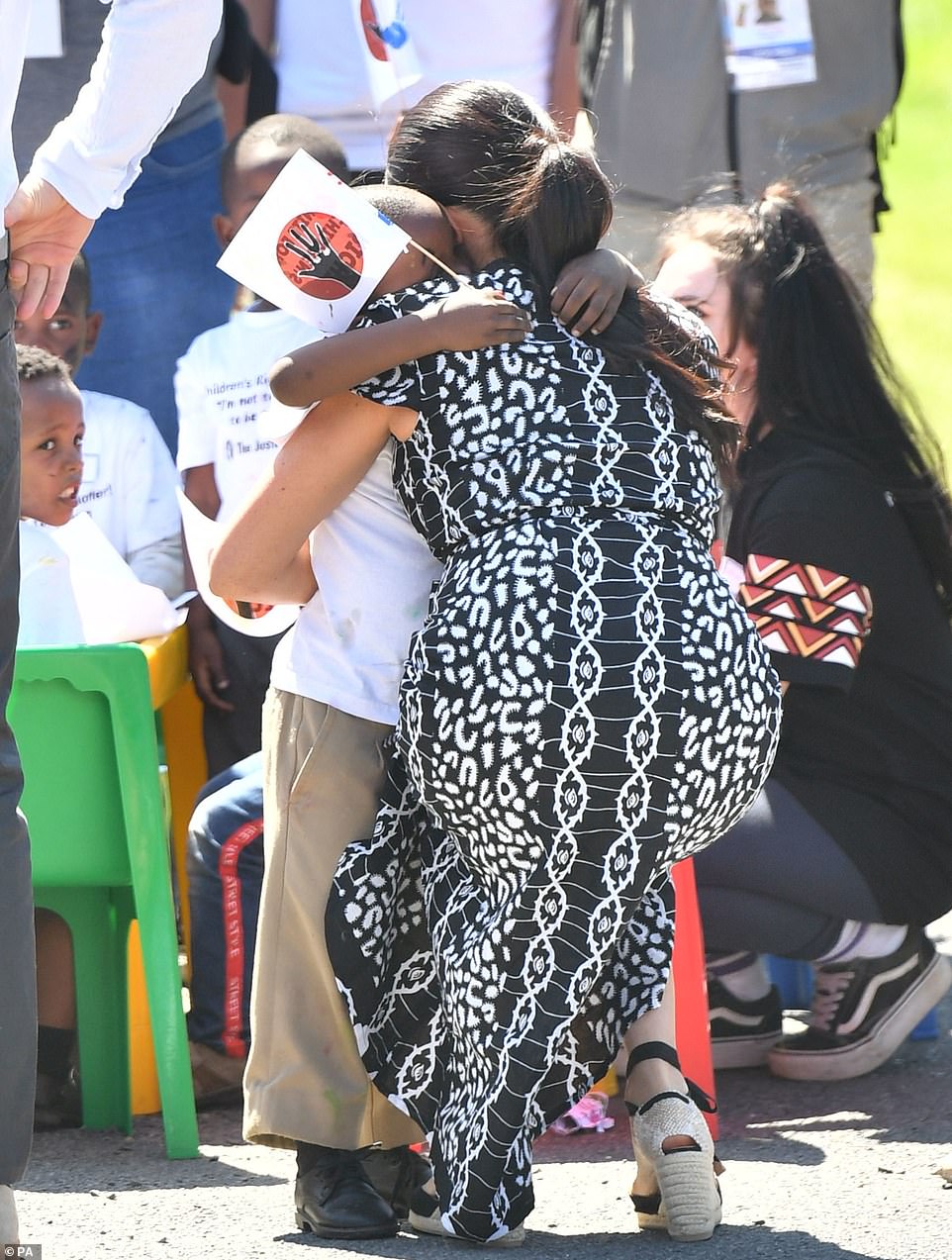 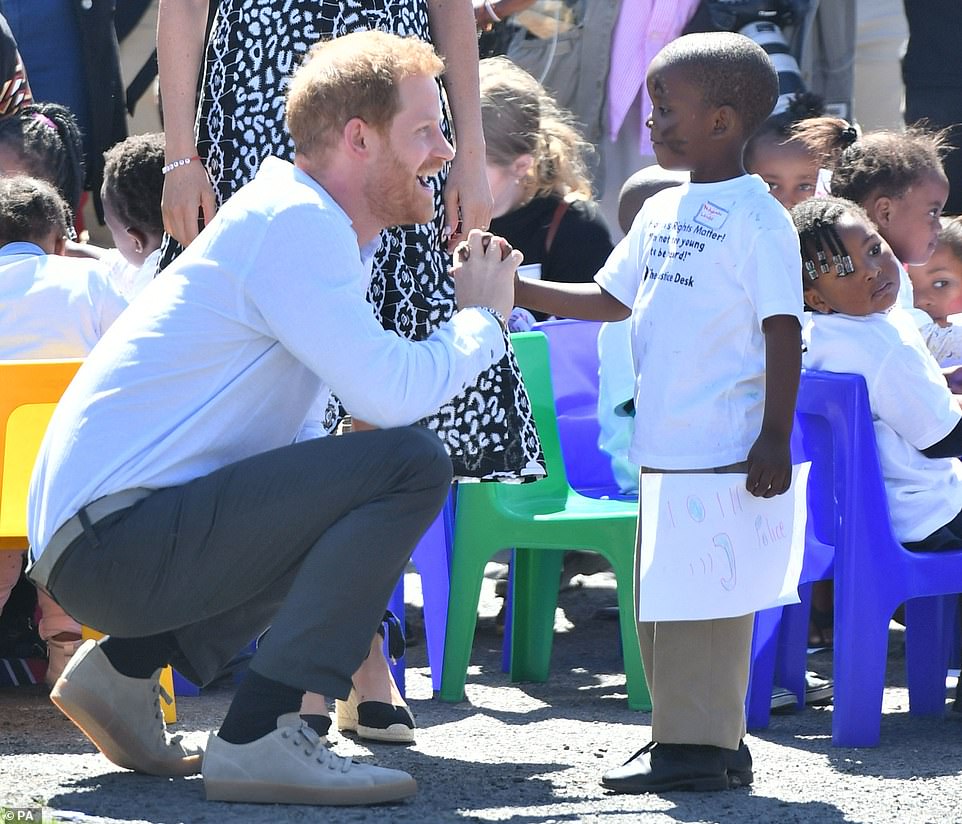 Harry beams as he kneels down to say hello to a schoolboy waiting to greet him in Nyanga, near Cape Town, South Africa 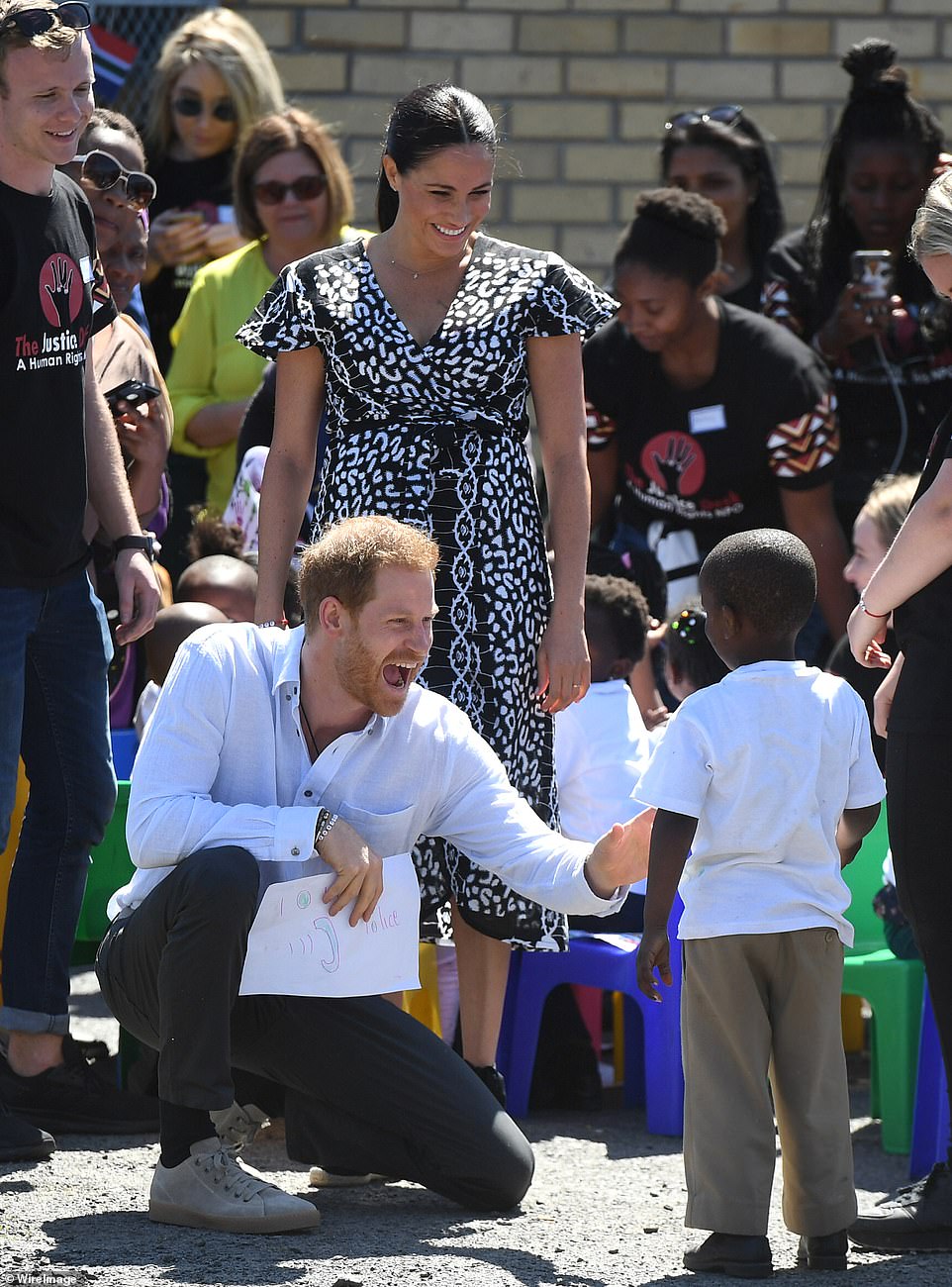 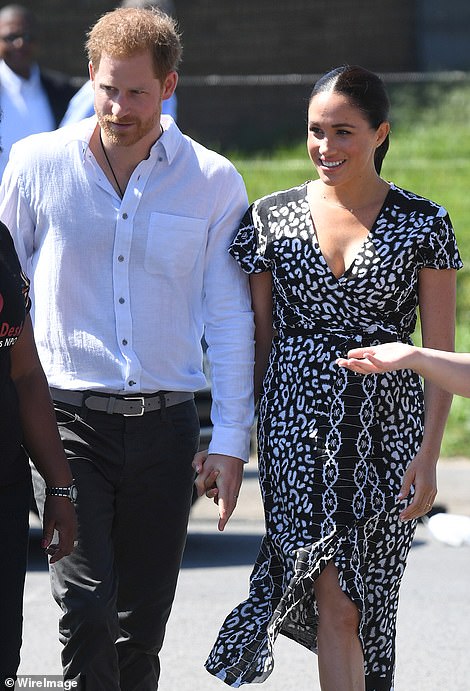 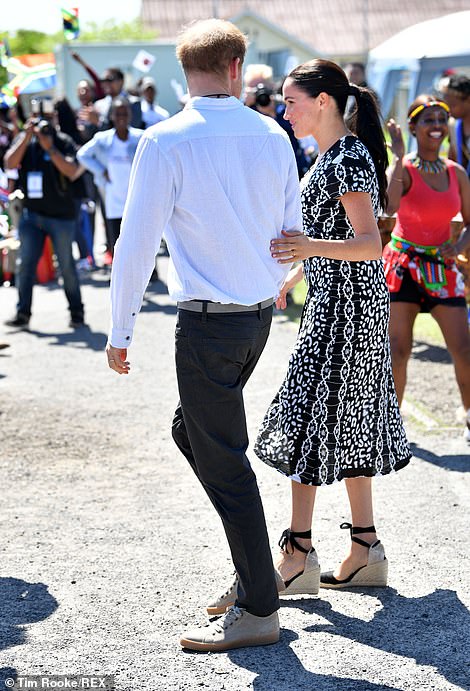 Although residents were active in joining the national protests against the apartheid laws passed in 1960, it has become notorious for black on black violence, which was exploited by the local police.

Crime is still rampant, despite many admirable community initiatives, not only having the highest murder rate in the country but topping the lists for car jacking and having a reputation for house robbery. Last year there were a reported 308 murders.

The couple are visiting a Justice Desk initiative in Nyanga township, which teaches children about their rights, self-awareness and safety, and provides self-defence classes and female empowerment training to young girls in the community.

The Justice Desk is an NGO supported by The Queen’s Commonwealth Trust, of which Harry serves as President and Meghan as Vice-President. 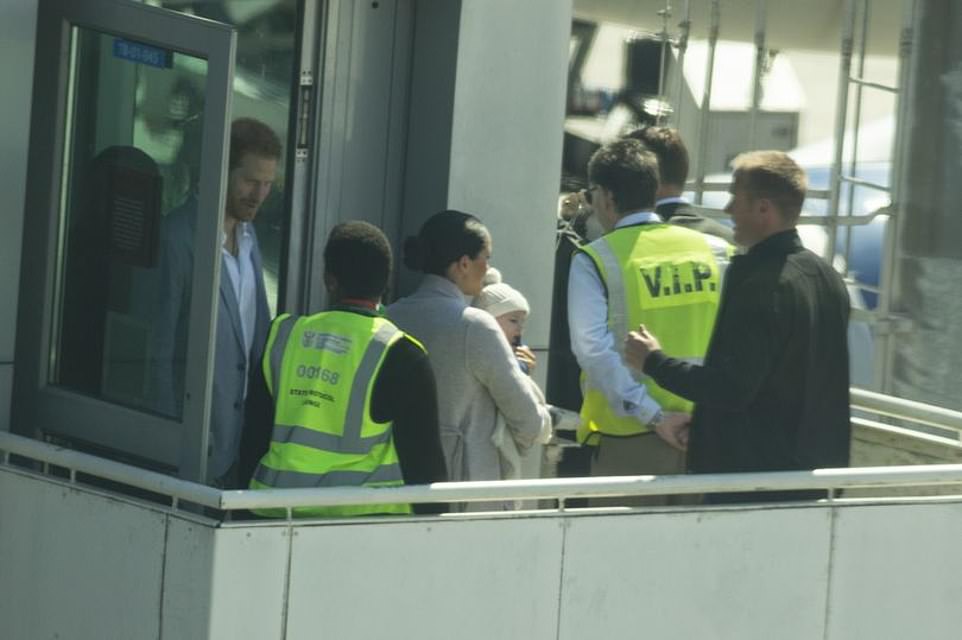 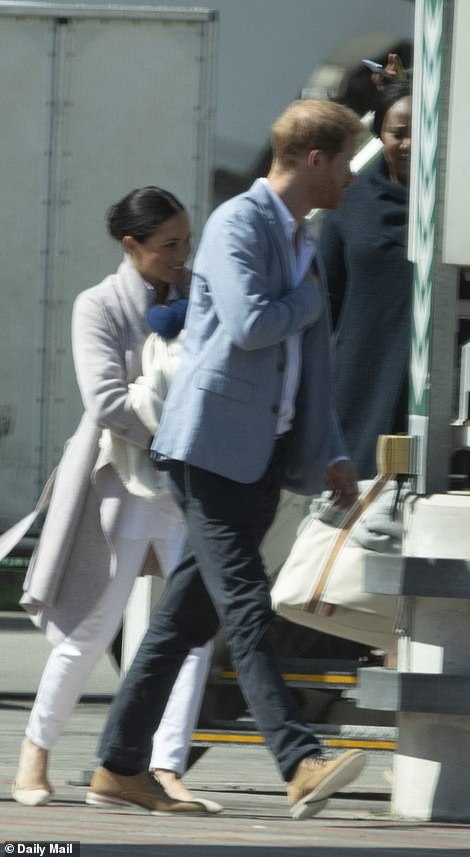 To date, the Justice Desk has directly assisted over 35,000 individuals, schools and communities.

Jessica will take them on a walking tour of various activities taking place. 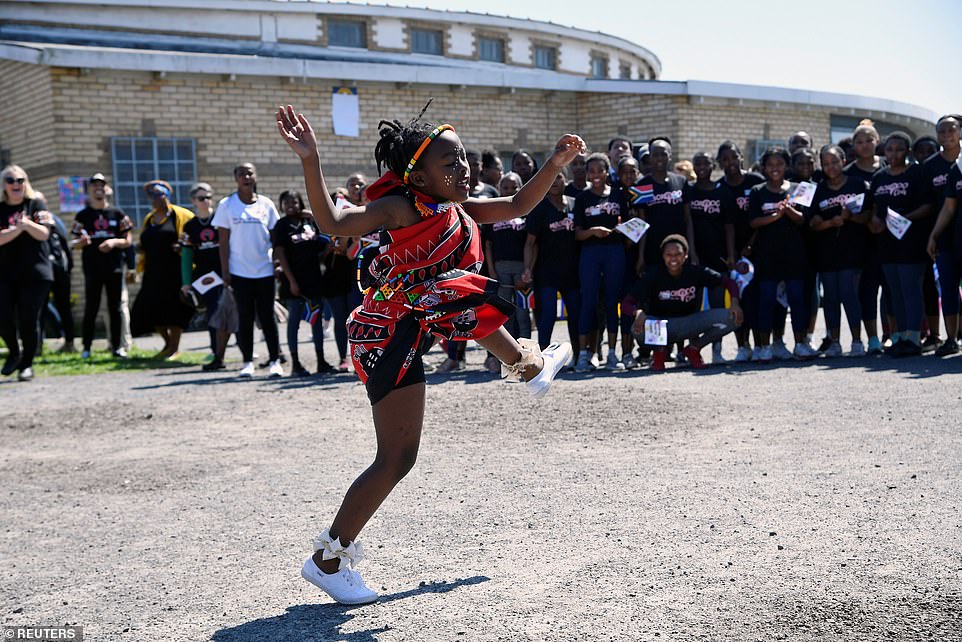 Primary school children in Nyanga gathered to greet the royals this morning, with an impressive display of traditional dancing 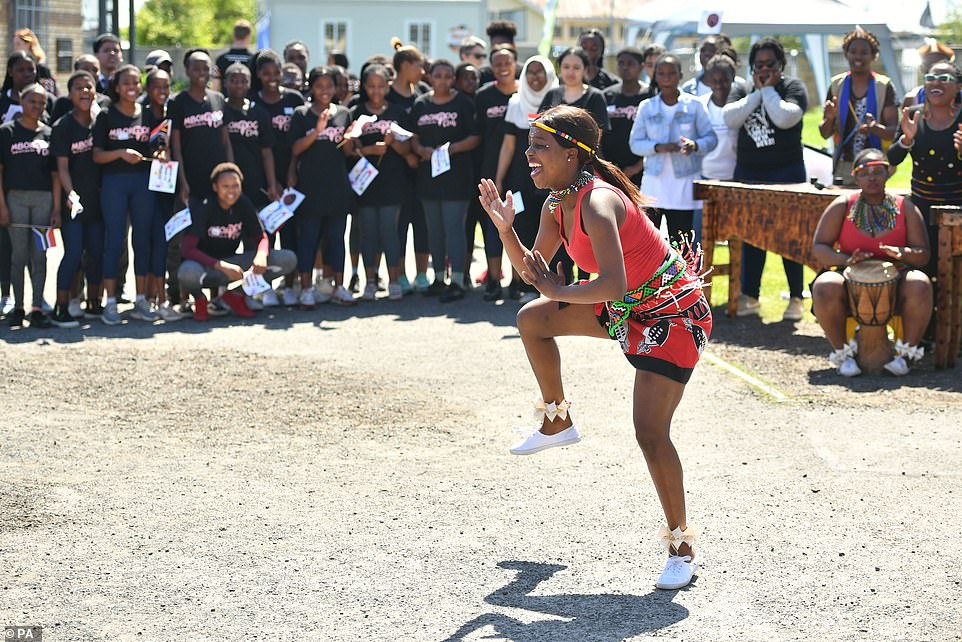 Moving into the learning centre, Theodora will then introduce the couple to her mother and the centre’s founder, Sylvia Hobe.

Their Royal Highnesses will then observe the Mbokodo Girls’ Empowerment programme, which provides self-defence classes and female empowerment training to young girls who have suffered major trauma.

The session will begin with the students reciting ‘Our Deepest Fear,’ the club’s anthem, and then the girls will then break off into four training groups.

Harry and Meghan will be escorted around the groups by and learn about the purpose of each of the activities, before coming back together to form a circle where the girls will have an opportunity to have a discussion with them privately.

Afterwards, Their Royal Highnesses will leave the learning centre, followed by the girls singing their team anthem.

Harry and Meghan will each, unusually, make a short address, followed by a presentation of a gift from the Justice Desk, and a group photo, before departing.

Nyanga is one of the oldest black townships in Cape Town, established in 1946 under the Apartheid migrant labour system. Its name means ‘moon’ in the local dialect of Xhosa.

In 1948 migrants were forced to settle in Nyanga as nearby Langa became too small.

It is situated along the N2 highway close to the city’s only airport, Cape Town International, and other deprived townships of Gugulethu and Crossroads.

It is known as the ‘murder capital’ of South Africa, with an average of one in 206 people killed each year.

There has been 6.2 per cent decrease in the number of murder cases in the area for the year 2018/2019, but still remains the most deadly in the country. It also has a reputation for car-jacking and robberies. 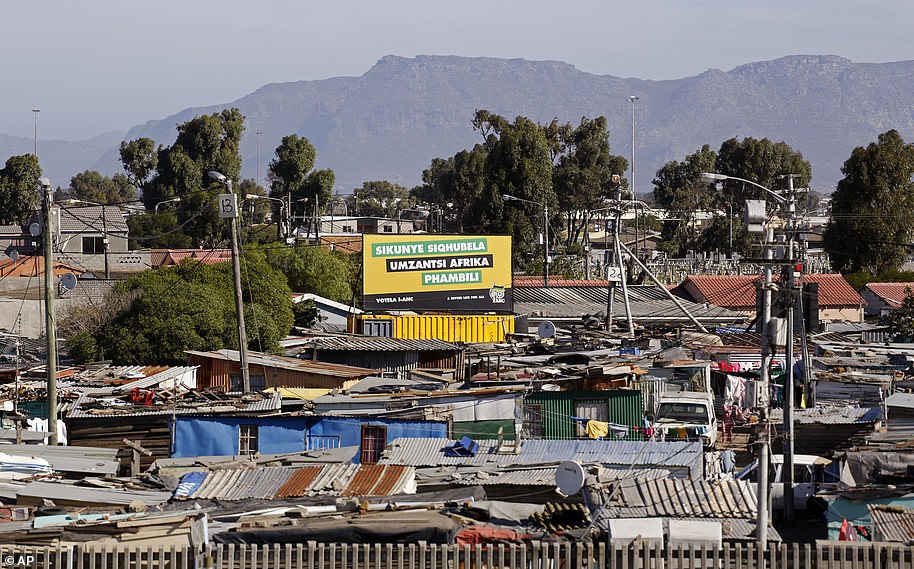 Unemployment is currently well above 50 per cent and HIV/AIDS continues to be hugely prevalent.

Nyanga residents were active in joining the national protests against apartheid laws passed in 1960, but later became notorious for black-on-black violence after tensions were ramped up by local police.

They were also heavily involved in the 1976 student uprisings triggered after Afrikaans became South Africa’s first official language in schools.

Black-on-black faction fighting continued into the 1980s, when police officers were accused of exacerbating tensions along community lines. 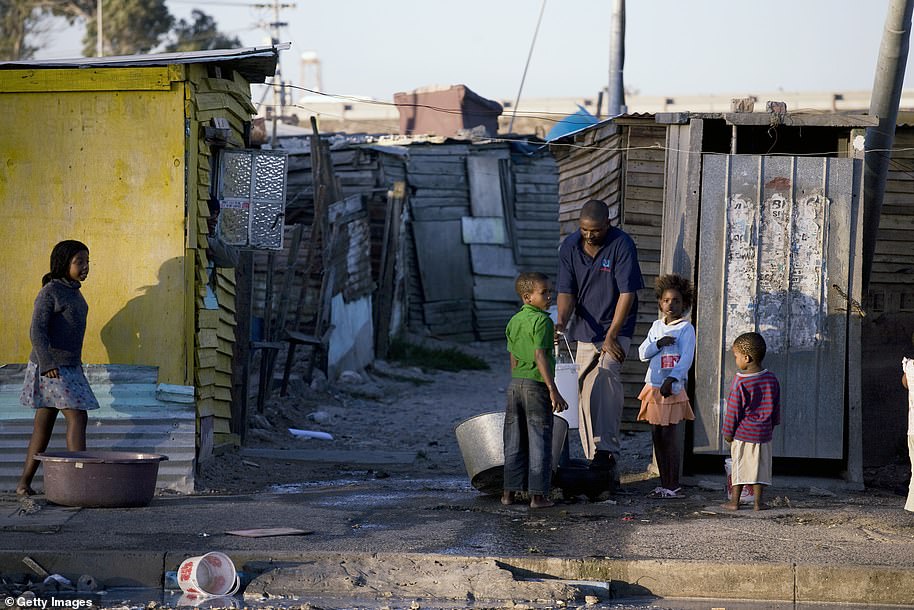 Nyanga (residents pictured) is one of the oldest black townships in Cape Town, established in 1946 under the Apartheid migrant labour system