The Duke and Duchess of Sussex stepped off their plane in Wellington on Sunday to a very excited welcome.

After the Invictus athletes they travelled with disembarked, Prince Harry and Meghan were greeted by Prime Minister Jacinda Ardern and Wellington Mayor Justin Lester.

Prince Harry was given a box by the Invictus delegation, and Ms Ardern apologised for the strong Wellington winds, NewsHub reported. 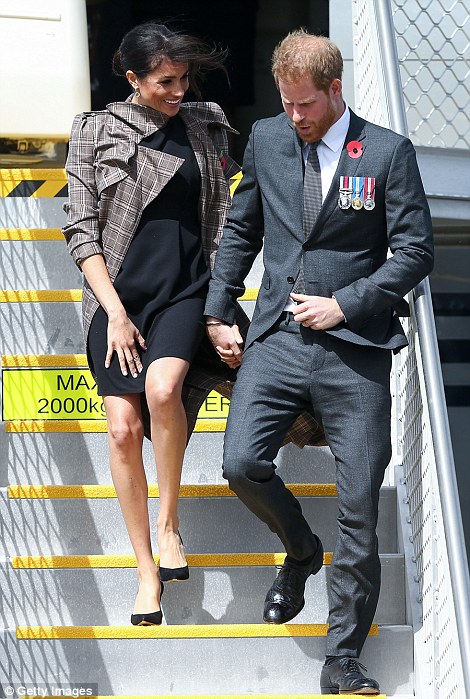 Prince Harry and Meghan Markle arrived in Wellington, New Zealand, on Sunday afternoon to a warm and excited welcome 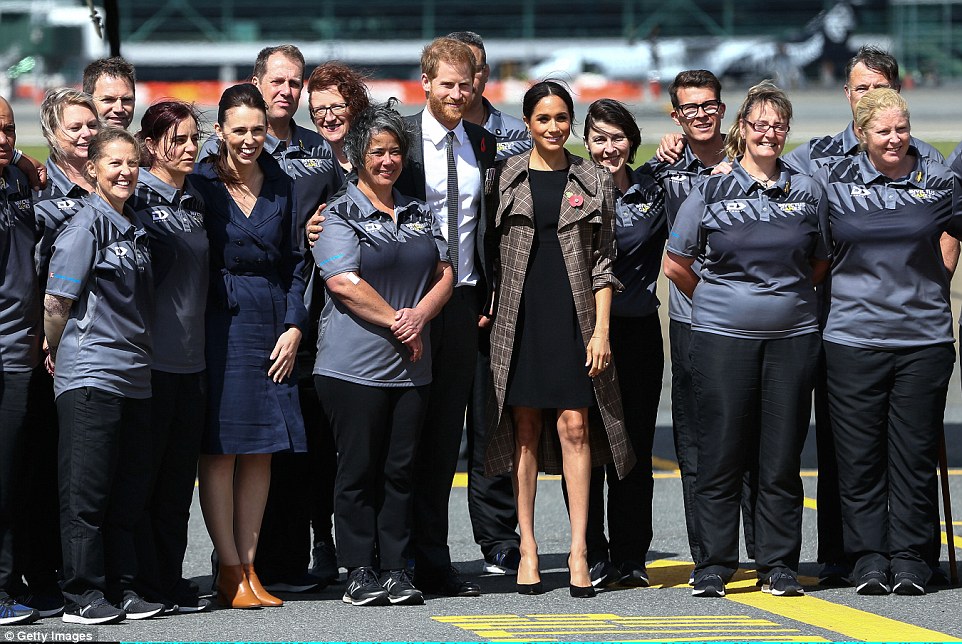 The couple were greeted again by the New Zealand Invictus team, who had been on their plane and gathered around after disembarking first

The couple were quickly whisked away in a silver Mercedes bearing the number plate ROYAL1, and taken to nearby Government House.

Maori warriors in traditional dress were in attendance, and a pōwhiri was performed for the visiting royals.

A pōwhiri is a Māori welcoming ceremony involving speeches, dancing, singing and finally the hongi, where one person presses their nose and forehead against another.

Harry and Meghan will watch a Haka performed by members of New Zealand’s Armed Forces, a group the Prince has performed the traditional dance with before.

The Duke and Duchess of Sussex were taken to Government House, where they greeted dignitaries with a traditional hongi, where one person presses their nose and forehead to another person’s 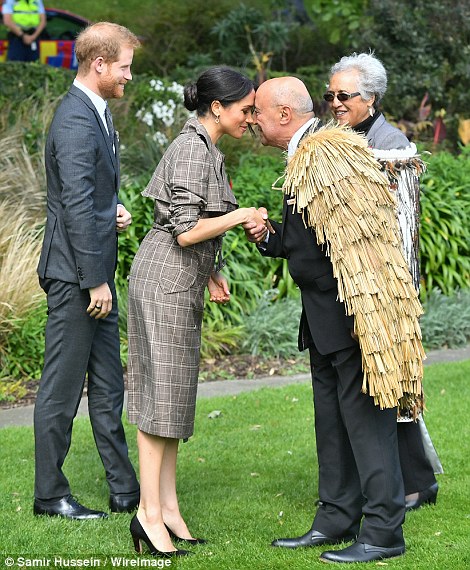 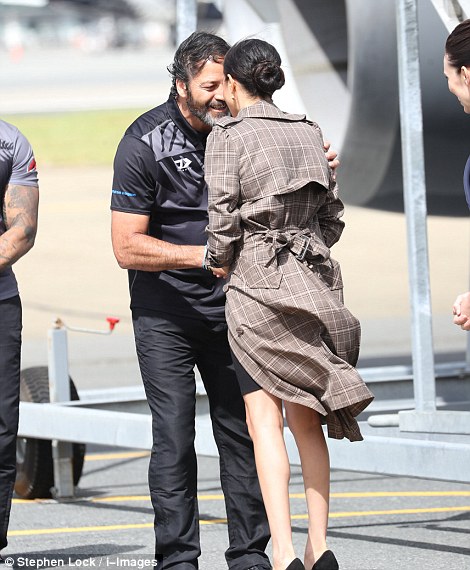 Meghan was seen greeting several high profile New Zealanders with a hongi, including one Invictus athlete 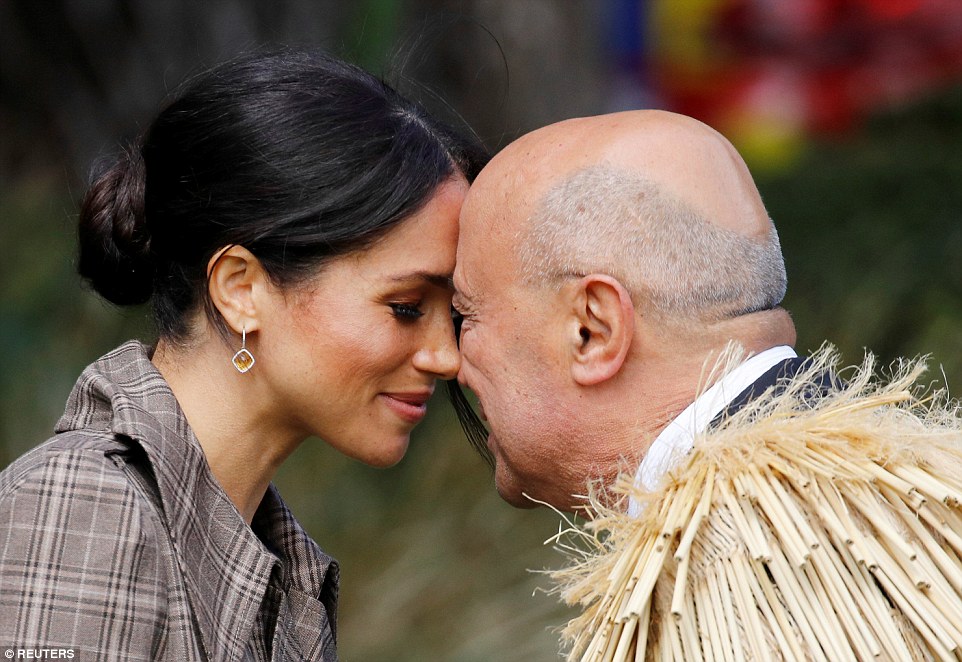 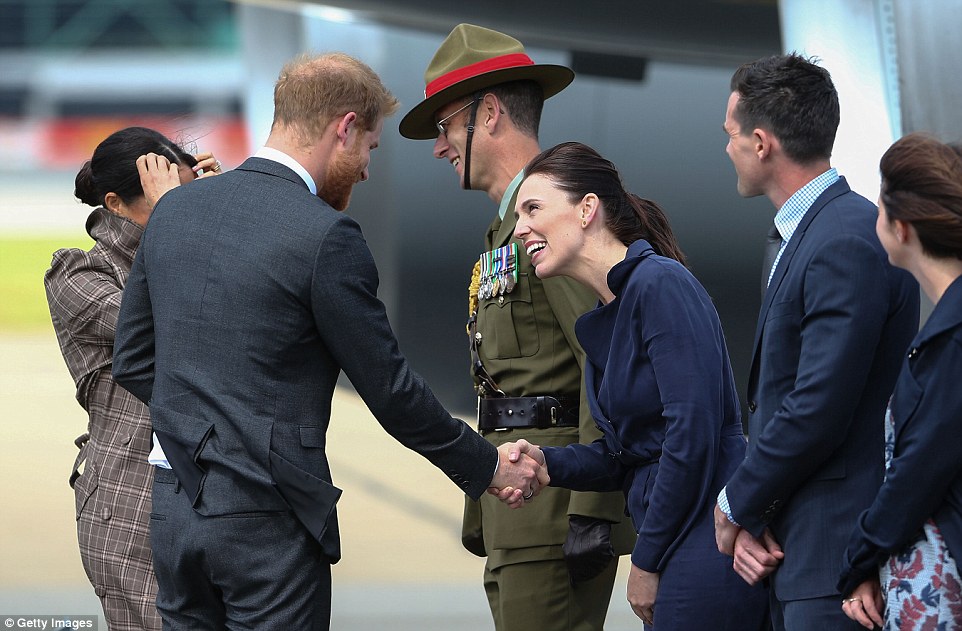 Prime Minister Jacinda Ardern met the couple at their plane, where she is believed to have apologised for the strong winds Prince Harry also received a hongi from a Maori warrior, as Meghan stood nearby The couple will then attend the Pukeahu National War Memorial to lay a wreath at the Tomb of the Unknown Soldier.

Still at Government House, the Duke and Duchess met the Governor General and watched a Haka performed by a group from Hato Paora, a Fielding Maori Boys’ boarding school.

A military demonstration was performed, and the couple spoke with children from the schools that had attended the ceremony, as well as those in Girl Guide and Boy Scout groups.

The Duchess of Sussex decided against a designer outfit for the day, wearing a black maternity dress from ASOS instead, but she did team it with a trench coat from New Zealand designer Karen Walker.

Upon arriving at the War Memorial, the couple each laid a single fern on the tomb, before together laying a full wreath and entering the Memorial building.

Inside, Prince Harry was presented with the Badge in Gold for his work helping injured veterans. Wife Meghan attached the pin to his jacket, above his military medals.

Their visit to the memorial will be one of the only opportunities for the public to sight the Duke and Duchess on Sunday, and more than 5,000 people are reported to be in attendance.

Among them, a small group of protesters are holding the Tino Rangatiratanga flag, which symbolises Maori sovereignty  and banners reading ‘NZ troops out of Afghanistan – stop the war’.

One young boy with red hair, wearing a blue bow tie, was seen holding a sign that said ‘Hi Harry, I’m Harry’, while a group of girls held a sign saying ‘We love you Meghan! (Harry’s alright too)’.

The couple’s arrival into the public area sent the crowd into meltdown, with tears shed, screams heard and presents given.

Meghan spoke with several woman, including one who told NewsHub she’d flown all the way from California to meet her, and had been able to speak with her about being biracial.

The Duchess was gifted flowers, a teddy bear, and a red flower, which she pinned to her jacket, underneath her Anzac poppy.

Harry and Meghan will spend their evening at an official dinner, before kicking off Monday with breakfast at a cafe and then heading to the Abel Tasman National Park. Wannabe: A young redheaded boy wearing a blue bow tie made a bid for the Prince’s attention by holding up a sign that read: ‘Hi Harry, I’m Harry’ 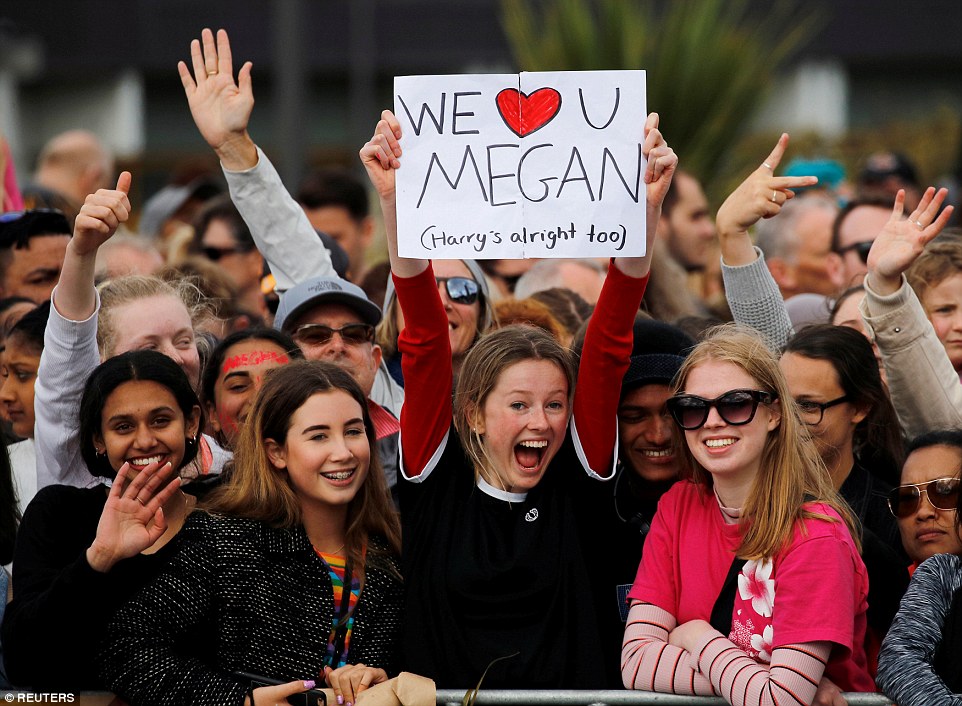 A group of very excited girls held up another sign, which read ‘We love you Meghan! (Harry’s alright too)’ One woman decorated her part of the barrier in flags from the royal wedding, and made a joke sign using her former job as an actress that said ‘Pregnancy “Suits” you Duchess’