‘Harry and Meghan’s “blame everything on racism” show’: World media accuses couple of ‘never missing an opportunity to hit the royal family’ and making ‘harmful accusations without proof’

Harry and Meghan sought to blame everything on racism as they gave their first-hand account of the events that led them to quit royal life in a new Netflix series.

At least that is the conclusion of the world’s media after reviewing the first three episodes, with Spain’s La Vanguardia concluding that it amounted to less of an attack on the royal family than on perceived racism in British society as a whole.

Italy’s La Repubblica agreed, saying the film is ‘full of’ claims of racism against the UK made by the couple, their supporters and cherry-picked experts – but it is a ‘thesis of dubious value’ since the series also clearly shows they are hugely popular in Britain.

Over in Germany, Bild said the pair ‘never miss an opportunity to hit the royal family’ while France’s Le Monde says the documentary does little to dispel the notion they ‘never stop rehashing the past and bring harmful accusations without proof.’

Sueddeutsche Zeitung points out they have earned more than $100million from the tell-all tale and asks: ‘How much pity can you have?’ 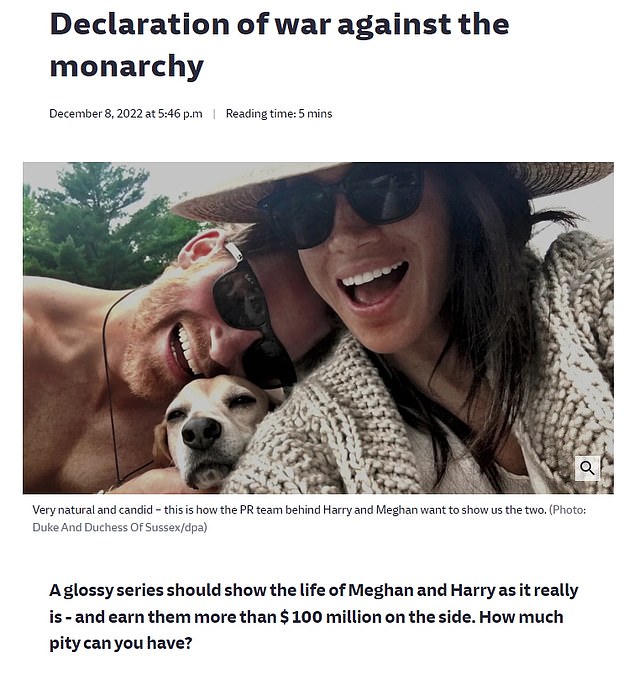 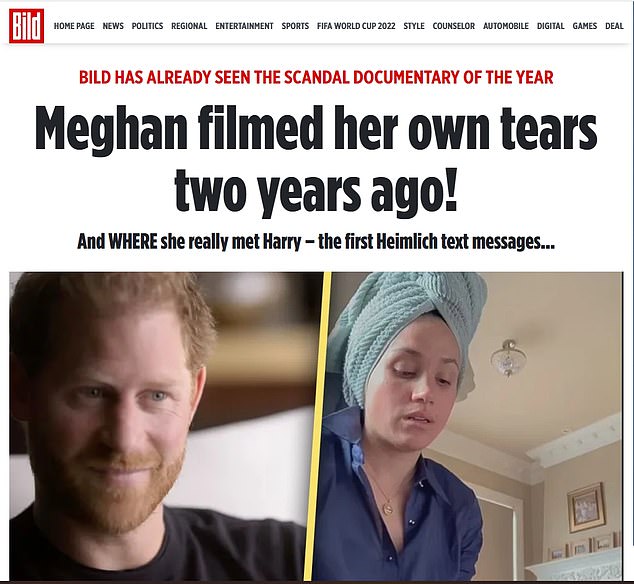 The first three episodes of the series dropped on Netflix yesterday morning and gave a lengthy account of the couple’s first meeting, early courtship and marriage proposal – cutting off before the wedding an falling-out with the other royals.

It also gave a backgrounder on Harry and Meghan’s lives growing up and key experiences – such as the death of Diana – that seem aimed at providing justification for many of the claims that will be contained in the latter three episodes.

They will not be released until next Thursday, December 15.

France’s Le Parisien said the initial episodes contain ‘nothing new under the sun’ but tease ‘more chaos to come’ in recounting the fateful events after Harry and Meghan’s wedding that saw them quit royal life and the UK for California.

The royal family will have to ‘hold their breath’ for another week, the paper surmises.

Le Monde came to a similar conclusion, saying there were ‘no startling revelations’ and the film has so-far retrodden old ground that is unlikely to change anyone’s view.

‘On the one hand, they will have exasperated even more those people who believe the couple never stop rehashing the past and bring harmful accusations without proof against the monarchy,’ the paper says. 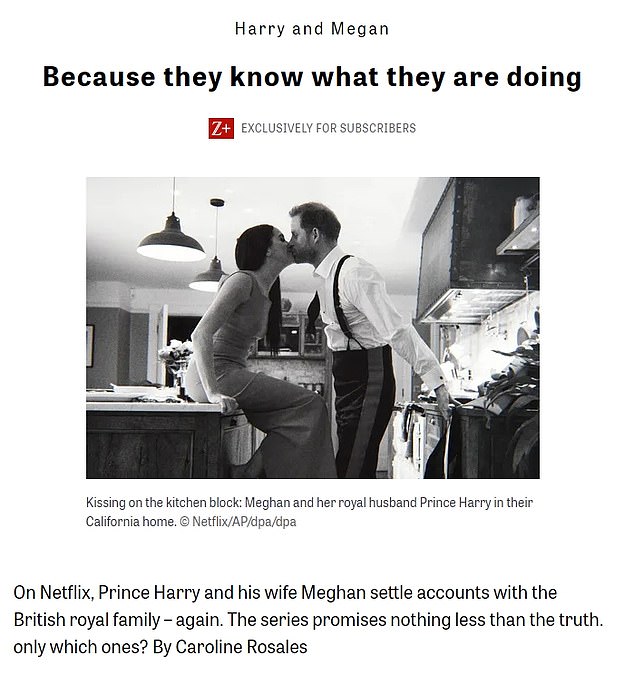 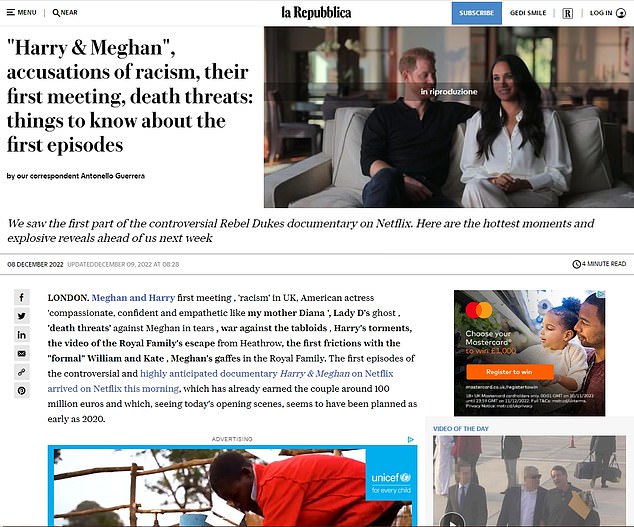 ‘On the other, the [documentary] will reinforce those who think the pair are right to raise their voice against an outdated institution that maintains – from their point of view – racist biases.’

El Pais, one of Spain’s largest newspapers, described the film ‘a Manichean account’ – meaning a black and white tale of good and evil – which ‘lays the foundations for what will come next: the reasons for their departure.’

Germany’s Die Zeit said the series sees Harry and Meghan ‘settle accounts with the British royal family – again’ and while the series promises to tell ‘the truth’ viewers must ask themselves ‘which truths’ they are being told.

The paper’s headline reads: ‘They know what they are doing.’

‘Entertaining… but it feels too much like repetition’ was the summation of De Telegraaf in the Netherlands,  while Belgium’s public broadcaster RTBF said it is not a documentary at all but an ‘infomercial’.

‘It’s a kind of media stunt, an attempt to restore image and of course financial operation since there is a lucrative contract at stake,’ analyst Hugues Dayez said. 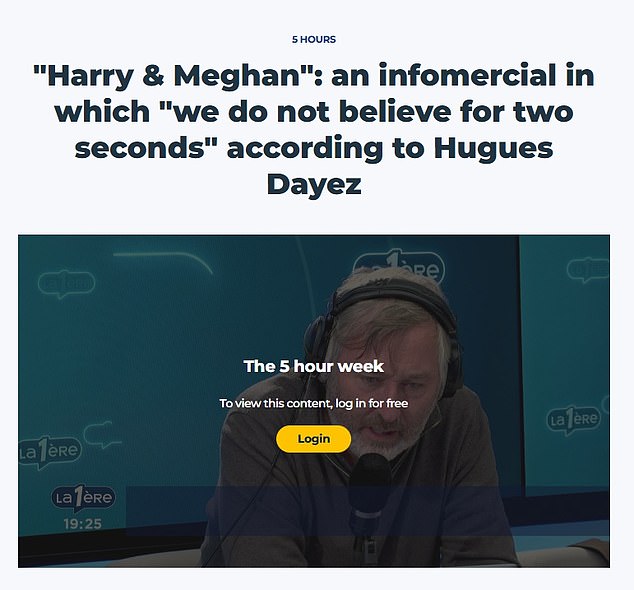 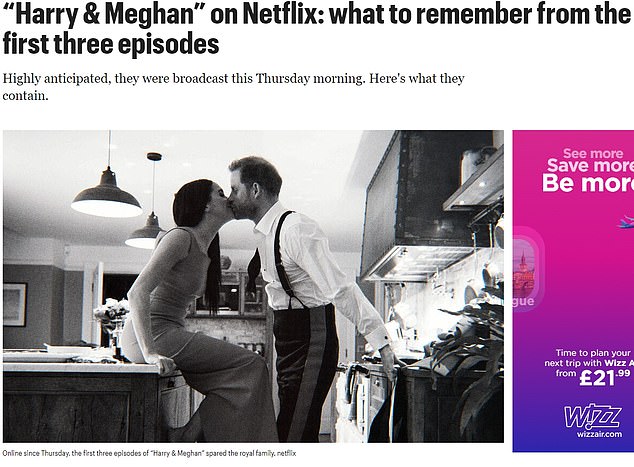 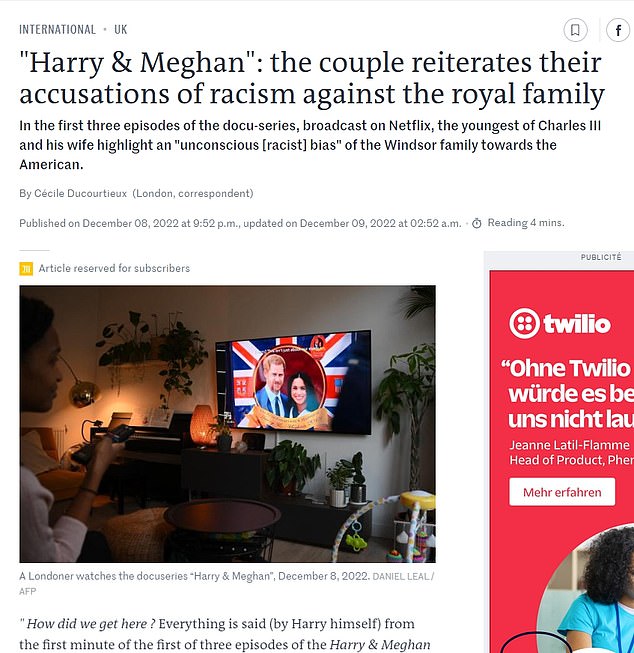 While the couple claim to be uncovering the murky relationship between the royals and the tabloid press, Dayez says that relationship – in which the public subsidise the family in return for ‘a show’ – is already an open secret.

‘We don’t believe it for two seconds, that’s the problem: we feel the insincerity of this testimony,’ he argues.

While Harry at times comes off as sincere and emotional – especially when talking about past traumas and particularly his mother Diana – Dayez concludes that Meghan’s own emotions come across as fake and stage-managed.

‘There is a disconnect in relation to him,’ he says. The interview where they’re together, at one point she makes fun of the fact that she had to curtsy and that she didn’t know anything about it, and we see that he’s having a bad time because she’s talking about his family.’

Norway’s national broadcaster, NRK, interviewed a royal expert who said the fallout from the series is likely to be ‘full-on war’ between the couple and other royals.

Sweden’s Expressen concluded there is now ‘no way back’ into the fold for Harry.