Harry and Meghan show off personalities in relaxed wedding photos

One black-and-white shot, taken at Windsor Castle, shows Meghan leaning back against Harry as he wraps his arm around her.

In contrast, the Duke and Duchess of Cambridge both stood upright in their official couple picture, taken by photographer Hugo Burnand in Buckingham Palace’s throne room following their wedding in 2011.

The photographs are also less formal than the portraits of those of Prince Charles and Diana by Patrick Lichfield, also taken in the throne room in 1981.

Expert Grant Harrold, who is known as the Royal Butler, said the new photographs show once again that Harry and Meghan are a ‘very modern’ couple.

Prince Harry and Meghan’s official weddings are more relaxed than those of royal couples, as this black-and-white shot by photographer Alexi Lubomirski shows 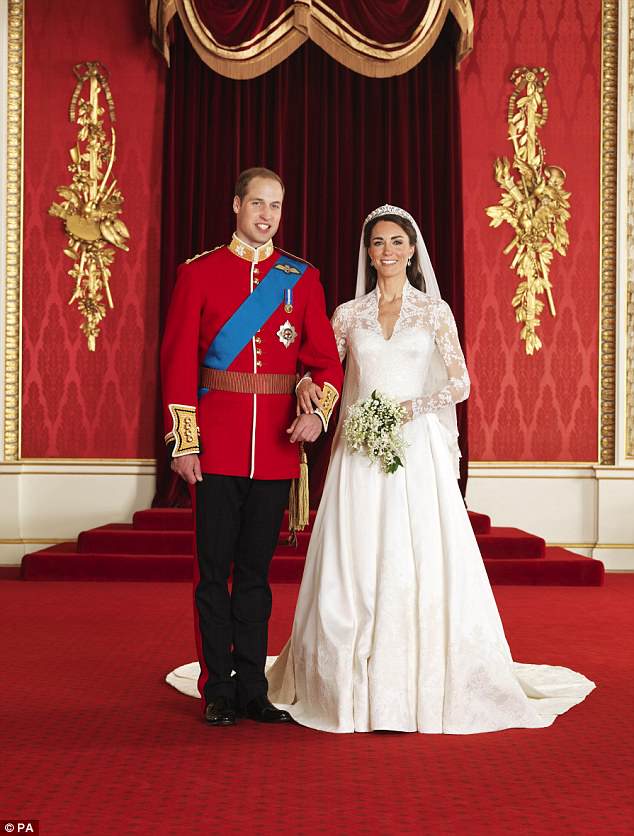 The Duke and Duchess of Cambridge both stood upright in their official portrait, taken by photographer Hugo Burnand in Buckingham Palace’s throne room following their wedding

Speaking to FEMAIL, Mr Harrold said: ‘The wedding pictures released today echo my views on the Duke and Duchess of Sussex being very modern royals.

‘These images go to show just that and the less formal pictures echo the engagement photos of the happy couple too.’

He explained the contrasting photographs by pointing out that Prince Charles and Prince William are first and second in line to the throne.

‘Let’s not forget that the official Pictures of the Prince and Princess of Wales and the Duke and Duchess of Cambridge were fitting for that of future Kings and Queens,’ he said. 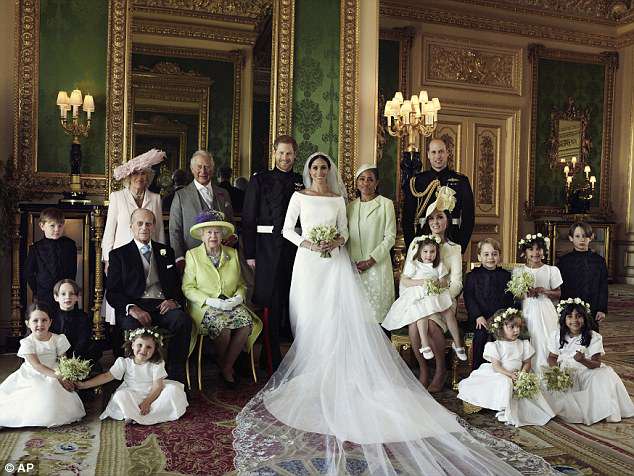 A group shot featuring the Queen and senior royals is also less formal than previous shots, with Princess Charlotte sitting on her mother’s knee 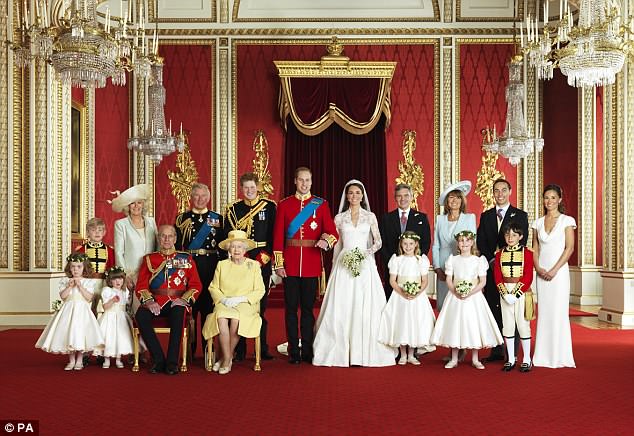 ‘As the Duke of Sussex is sixth in line to the throne have he can have a more relaxed approach as we saw in their wedding, and now in their official photographs too, which are wonderful to see and really goes to show what modern royals they are.’

Harry and Meghan’s group photograph – featuring the senior members of the royal family, along with Meghan’s mother Doria Ragland and the bridesmaids and page boys – is also more relaxed than previous shots.

The picture sees Princess Charlotte, three, sitting on her mother’s lap, while Doria is seen standing right by her daughter’s side.

The third shot, showing Meghan and Harry with just their bridesmaids and page boys, is perhaps more similar to one of Kate and William’s official shots – although Meghan appears to be kneeling on the floor rather than sitting on a chair.

Harry and Meghan asked the same photographer who shot their engagement pictures to take their official wedding pictures on Saturday. 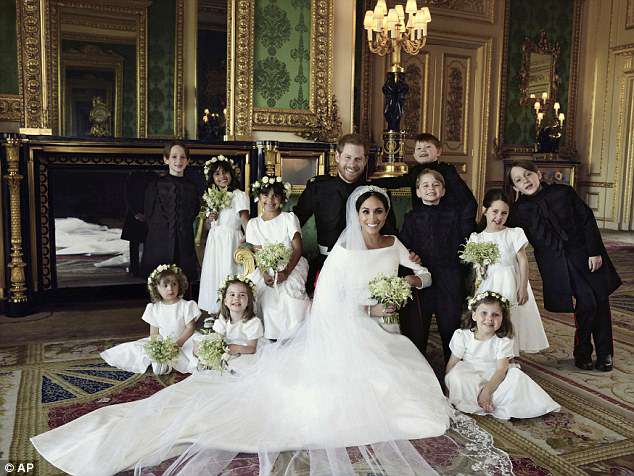 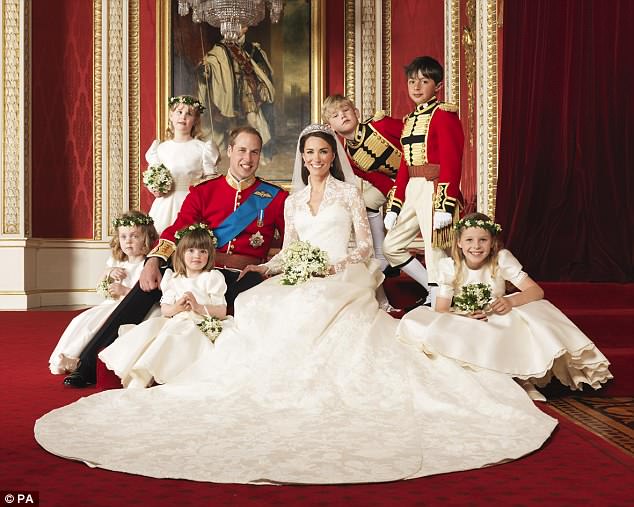 Kate and William also posed with their flower girls and page boys in this sweet snap, although the Duchess appears to be sitting on a chair

New York-based Lubomirski, was a protégé of Mario Testino, is famed for his portraits of leading ladies – adding a touch of Hollywood glamour to his shots.

The fashion photographer is also a prince of the Polish House of Lubomirski, whose royal lineage stretches back 500 years on his father’s side and gives him the title: ‘His Serene Highness’.

The engagement photographs had been considered the most initiate of any royal couple, with Meghan wearing a £56,000 Ralph & Russo gown featuring a sheer bodice.

Describing the engagement pictures, Judi James told FEMAIL at the time: ‘If there were any protocol about the intimacy levels of royal engagement photos Harry and Meghan have cut right through it with the stunningly sexy poses that show a couple so much in love that the viewer might seem to be intruding.

‘While William and Kate opted for some polite snuggling in their photos Harry has raised the bar by wrapping Meghan into his coat.’ 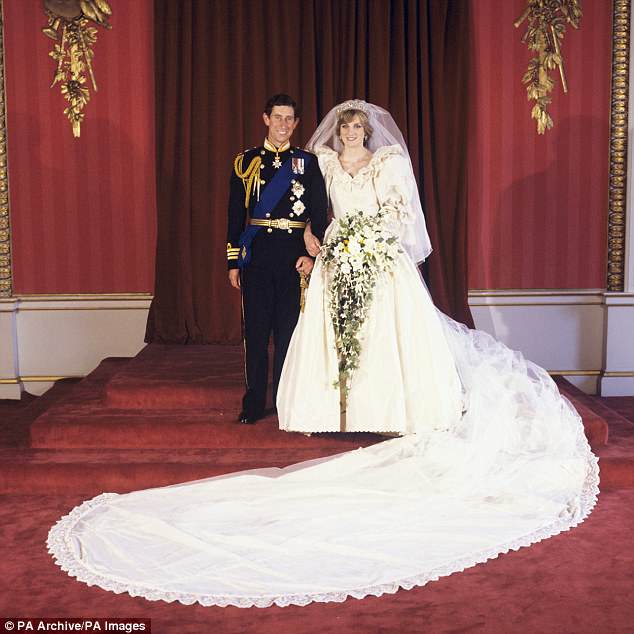 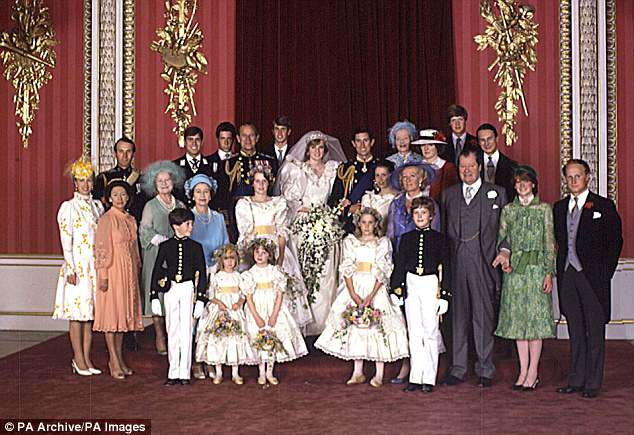