Prince Harry and Meghan Markle have revealed intimate details about the early days of their relationship in their new Netflix documentary – including how they used disguises and enjoyed a private engagement party.

The Duke, 38, and Duchess of Sussex, 41, who are now based in the US with their children Archie, three, and Lilibet, one, opened up about their pre-marriage life on the six-part docuseries, with the first three episodes released today.

Meghan revealed how she had planned a hot girl summer in 2016 – but Harry was the ‘plot twist’ when they encountered each other in July, with the Prince revealing that the couple met over Instagram.

However, this snippet shared by the couple in episode one, was in contrast to the ‘how we met story’ they previously shared, according to royal fans.

The first picture Prince Harry apparently saw of Meghan Markle was a snap of the actress with a dog filter on, shared to Instagram

The first picture Prince Harry ever saw of his future wife was a snap of Meghan with a Snapchat dog filter on. They then talked over FaceTime for some time as they got to know each other.

Harry said: ‘Meghan and I met over Instagram. I was scrolling through my feed and someone who was a friend had this video of the two of them.’

‘Oh gosh, isn’t that whole thing, it’s got like doggy ears,’ a laughing Meghan said, before Harry added: ‘That was the first thing, “I was like who is that?”. His wife continued: ‘That’s ridiculous.’

Harry messaged their common friend and they mentioned it to Meghan, who stalked the Prince’s Instagram feed to see ‘what he was about’.

Viewers questioned the variation, with one person writing on Twitter: ‘Harry and Meghan are remarkably bad at remembering which lies they have told.’

During the segment, Meghan also revealed the email their mutual friend had sent her, which read: ‘Between you and I, thought you might want to know this being newly single and all.

‘I put our Snapchat on Instagram and Prince Haz follows me (he’s a friend) he called me last night dying to meet you. I just might have to set you up,’ the message added.

Meghan admitted she asked to see the royal’s social media feed: ‘So that’s the thing. People say “did you Google him?” “No.”

‘But that’s your homework. You’re like “Hmm let me see what they’re about in their feed, not what someone else says about them but what they are putting out about themselves. That to me was the best barometer,’ she explained.

‘Then we got each other’s numbers. We were just constantly in touch, and I went “let’s meet”,’ Harry added.

A friend of Meghan’s named Silver Tree said that Meghan texted her saying: ‘Silver, you’re not gonna believe this. And basically told me that she was going out on a date with him. We thought it was really funny. Like “In what world does this happen?”.

In the bombshell documentary:

· The couple revealed what really happened on their first date

· The Sussexes shared unseen photos with their beloved dogs

· Meghan lifts the lid on her ‘amazing’ first Christmas at Sandringham

· Netflix show is branded a ‘TV bomb’ for the royal family 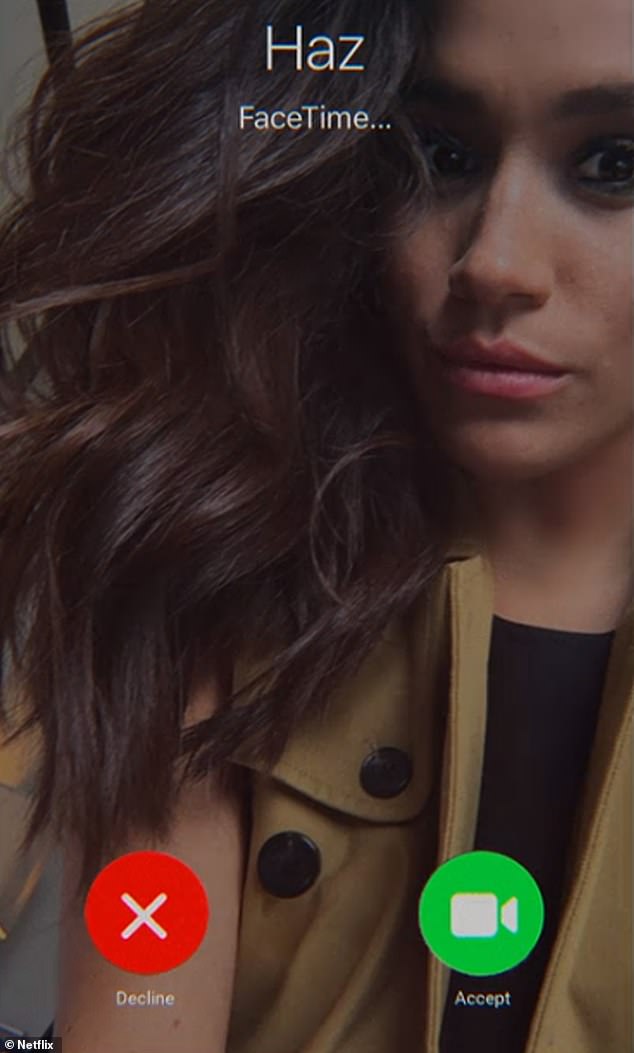 Elsewhere, Harry, 38, who is now based in Montecito, LA, with his wife and their two children, admitted to being late on their first date which took place at 76 Dean Street in Soho, as the couple shared text messages and other details about how they got together before the world knew.

Harry and Meghan also talked about how they used disguises in order to keep their relationship private and revealed they had a private engagement party in 2017 where the duo and their friends wore animal onesies. Harry and Meghan dressed as penguins, according to a friend.

In never-before-seen snaps from the romantic proposal Harry is captured down on one knee surrounded by candles as he holds a ring in his hand.

The prince is kneeling on a blanket in the garden next to Meghan’s adorable pooch and a large bouquet of white roses.

Harry said: ‘I wanted to do it earlier, because I needed to ask permission from my grandmother, I couldn’t do it outside of the UK. 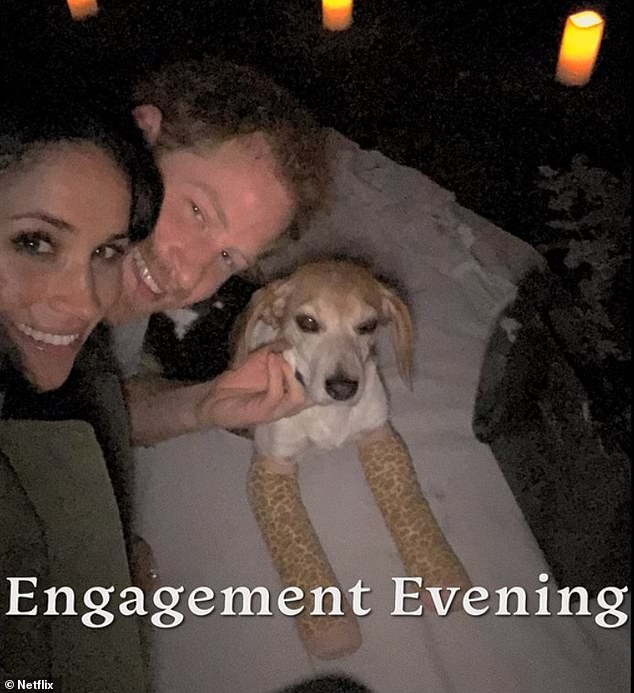 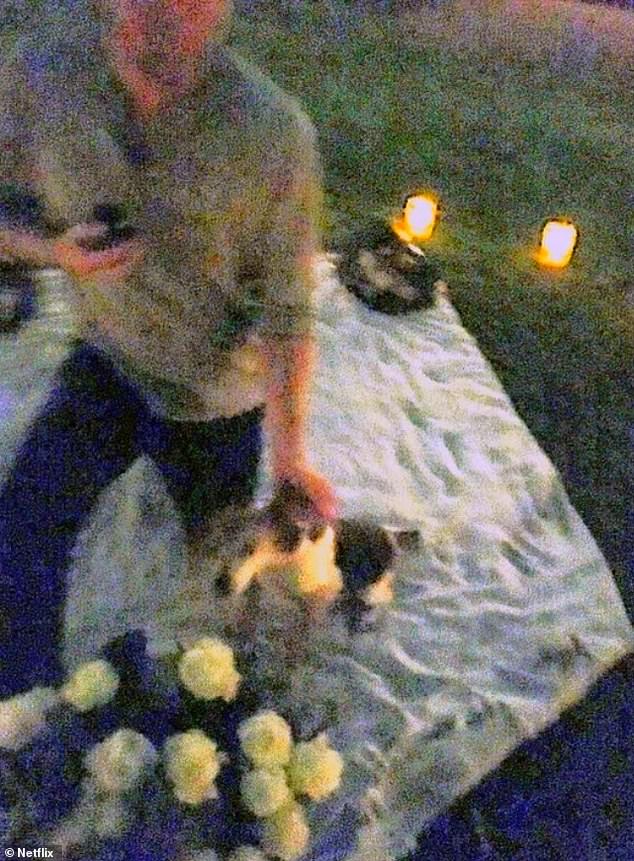 An incredibly intimate snap of Meghan and Harry’s engagement was shared in the docuseries, showing the royal on one knee

‘I popped a bottle of champagne while she was roasting a chicken and that kind of slightly gave the game away, she was like “you never drink champaign what’s the occasion” and I was like I don’t know, just had it lying around.’

Meghan quipped ‘it was a magnum’ before bursting into laughter.

Harry revealed he got 15 electric candles and placed them around the walled garden of their home to propose to Meghan.

In a candid clip, Meghan calls her friend Jess in excitement and whispered down the phone: ‘Oh my god Jess. It’s happening. He told me not to peek.’

However, in contrast, talking about how the news was given to the world in episode three, Harry and Meghan branded their engagement announcement in 2017 an ‘orchestrated reality show’ 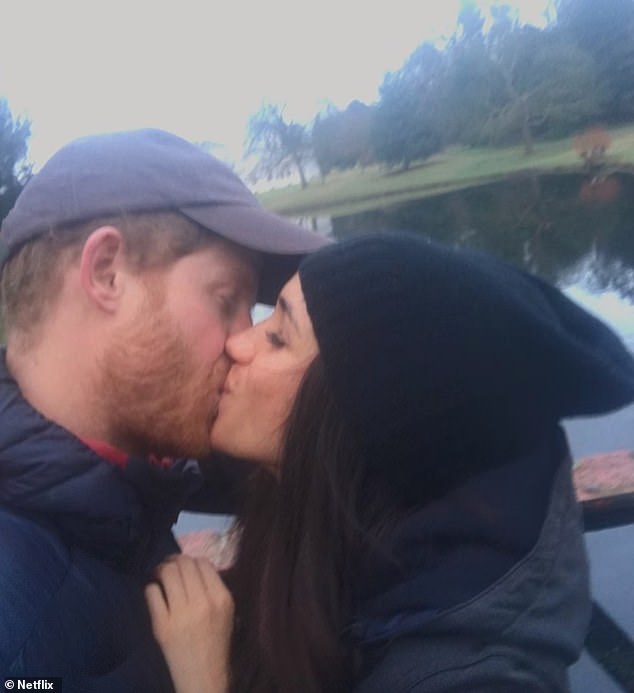 In the first episode of the Netflix drama, the couple discuss keeping their relationship private during the first few months

Elsewhere, the couple shared glimpses of their long-distance relationship with Harry and Meghan talking over FaceTime in the early stages.

One snap showed Meghan in bed with her computer, plastered with selfies of her and Harry and her dog by her side.  Another intimate snap showed Harry gazing lovingly at Meghan during a Facetime session.

Elsewhere, the couple were filmed reminiscing about their first date in a sneak peak of the show released as the first three episodes dropped on Netflix today.

‘You were late,’ Meghan laughed, saying Harry kept messaging her, writing: “I’m struck in traffic, I’m so sorry, I am in traffic, I am sorry”.’

Harry added he was ‘panicking, I was freaking out, I was so sweaty.’ Meghan said waiting alone for him to show up left her wondering: ‘is this what he does, this I’m not doing.’ 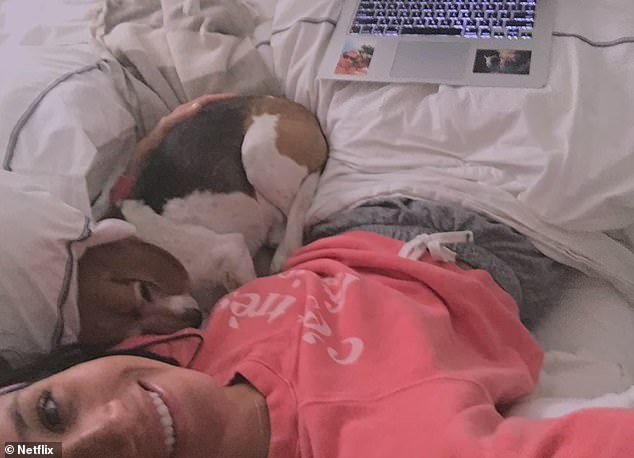 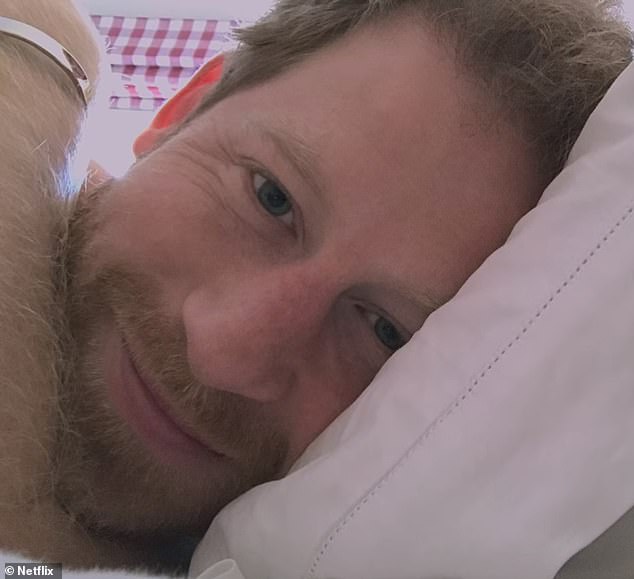 She said she wondered if he was ‘one of the guys who has so much of an ego that any girl would wait and sit around for 30 minutes for you’. ‘I was not interested in that,’ she added.

But her doubts were proved wrong when Harry actually showed up. ‘When I walked in, I was hot and sweaty and a red ball of mash,’ he said.

Meghan laughed and recounted how Harry was ‘genuinely like so embarrassed you were late.’

The couple also shared a picture of their second date, which took place at Soho House.

Meanwhile, the couple also discuss keeping their relationship private during the first few months.  They share a number of clips and snaps from the period, including one showing Prince Harry larking about with some swans.

The clip, which was filmed by Meghan, shows the pair relaxed and enjoying their time together before their relationship became public. 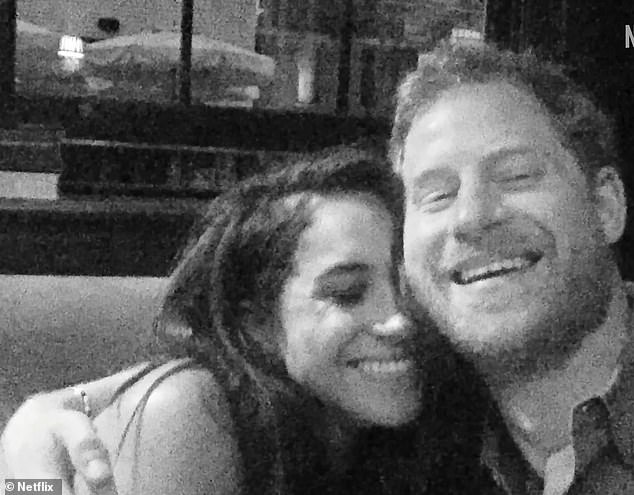 The couple said this selfie was a picture of the moment they decided to give their relationship a go, on their second date, at Soho House in London

In one highly personal photograph of the couple from the period, Meghan and Harry can be seen enjoying a kiss with one another.

In another intimate revelation in episode one, Meghan and Harry opened about their week together in Botswana at the beginning of their relationship.

Meghan said: ‘So I had one week off [work] and it was the same week, so he said do you want to come to Botswana? I said let me think about it and then I did.’

Harry admitted he was ‘astonished that she said yes’ as he had only met Meghan twice at that point.

He said: ‘This woman that I have only met twice, she’s coming to Botswana and we are going to be living in a tent for 10 days.’ 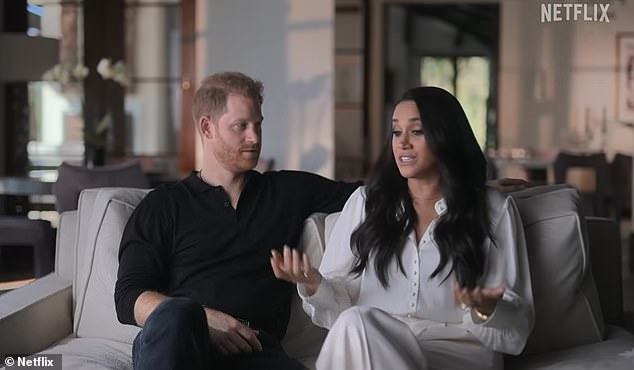 Prince Harry and Meghan opened up about their first date in the first episode of their Netflix docuseries, which was released today

’So, I get there, this is the first time I have seen him in a month, we are awkward at first, do we kiss, do we hug, and I just remember he handed me a chicken sandwich.

Harry continued: ‘Then we jumped in a land cruiser and off we went. We were sitting next to each other and then we were holding hands and then we squeezed in a kiss, and everything felt natural. We had to get to know each other before the rest of the world knew.’

Reflecting on the ‘unhealthy’ way in which the love story started, Harry said: ‘Dating became a combination of car cashes, multi surveillance driving and disguises which isn’t particularly a healthy way to start a relationship.’

But Meghan added the couple were also ‘relaxed and easy’ in the early days of getting serious with one another.

The son of Princess Diana also admitted that his experience with past relationships left him unsure about whether he wanted to pursue a new one.

‘Every relationship that I had, weeks or months, were splattered over the newspapers, the person and their family harassed, their lives turned upside down, by the third or fourth girlfriend, I didn’t know if I wanted this,’ he admitted.

‘So when I got to meet “M”, I was terrified of her being driven away from me by the media, the media who had turned away so many people away from me. I knew that the only way it could work was to keep it secret for as long as possible,’ he added.