Look who’s back! Harry Kane comes off the bench against Wolves as the Manchester City target plays for Tottenham for the first time this season amid his ongoing transfer saga

Harry Kane has made his first appearance for Tottenham this season amid his ongoing transfer saga after coming off the bench in the second half against Wolves.

Kane was included in the matchday squad for the first time this term as Nuno Espirito Santo named him on the bench despite uncertainty remaining around the striker’s future.

The 28-year-old came on for the final 19 minutes against Wolves, replacing Son Heung-min.

Kane, who trained with his Spurs team-mates on Saturday before travelling up with the squad to Wolverhampton, was given a frosty reception on his arrival at Molineux as the home fans booed him after he emerged from the team bus. 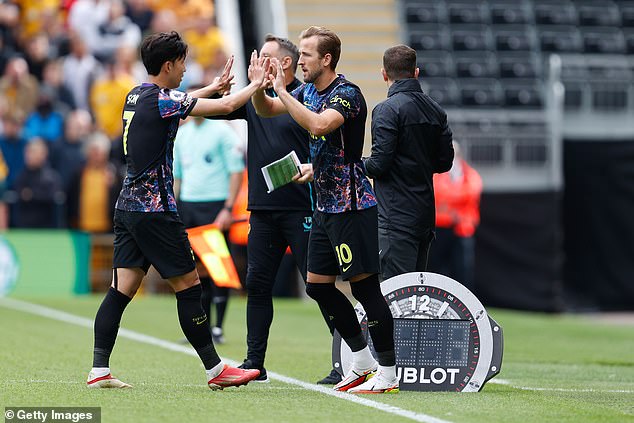 The striker (right) was subbed on in the 71st minute of the game, replacing Son Heung-min 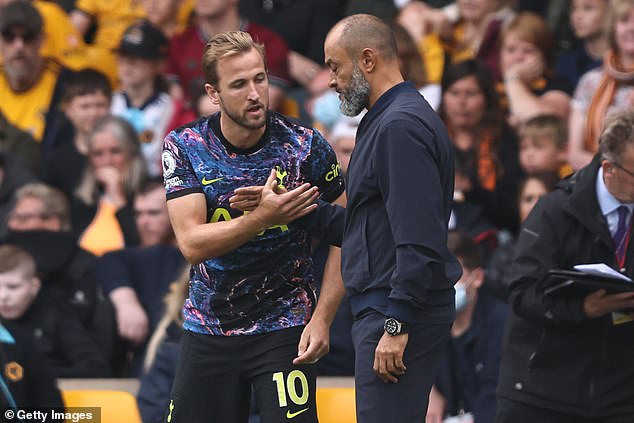 The England star wants to join Manchester City but Spurs do not want to sell him, with chairman Daniel Levy refusing to listen to any offers below £150million.

Kane had not yet played for Spurs this season, having been left out of their opening-day victory over champions City and the Europa Conference League play-off first-leg defeat by Pacos de Ferreira earlier this week.

Santo has spent much of his first six weeks at Spurs facing questions about Kane’s future and insisted he is taking the situation ‘day-by-day’ and won’t be rushed into playing the striker. 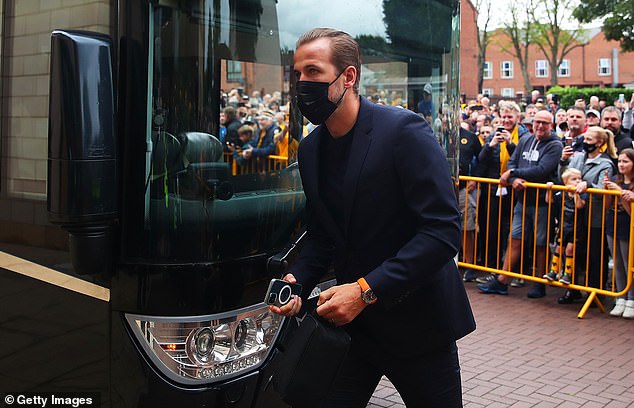 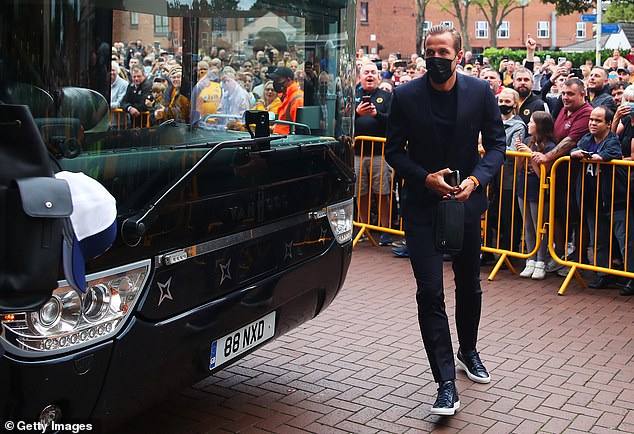 Speaking about Kane on Friday, the Spurs boss said: ‘He trained today, trained good. He’ll train tomorrow and tomorrow we’ll make a decision. I’m so sorry to keep on saying the same things but this is how we work.

‘It’s a day-by-day situation and decisions are made when we feel that we should make them, and we will make the decision on who’s going to travel tomorrow.’

He added: ‘Honestly, it’s not unfair or fair for me, it’s the reality. And the reality to be taken care of with wise decisions.’

As Sportsmail first revealed, Kane has vowed to give 100 percent to Spurs despite his desire to leave for the Etihad.

Prior to Sunday Kane had not played for the team under the new manager after returning from a holiday in the Bahamas and Florida and faced scrutiny over claims he refused to return for training amid links to Pep Guardiola’s side.

The club’s star forward was pictured in training alongside his team-mates for the first time this season on Friday.

Kane clarified there was a breakdown in communication which led to him not showing up in training earlier and he was also not selected in the matchday squad to face City last week.

He underwent some training ground work on his own on Monday while his team-mates recovered from their 1-0 victory over Guardiola’s champions.

Tottenham then left the striker at home for their Europa League Conference defeat by Portuguese side Pacos de Ferreira on Thursday.

Sportsmail revealed earlier this week that the England captain feels chairman Daniel Levy has broken a promise to allow him to leave the club this summer amid increasing tensions between the pair.

He still has his eyes set on a move to Manchester City – who have already made a bid of £125m for his signature. Spurs are sticking to their valuation of £150m though City have been unwilling to match their asking price so far.

City do plan to make an improved bid before the end of the transfer window, but Guardiola’s side do not want to drag out the chase into next summer.