Tottenham fans look to Harry Kane as the team’s talisman, the leader and the man who can make the difference in front of goal.

The 25-year-old striker emerged into a feverish atmosphere at the Tottenham Hotspur stadium for its first Champions League game full of desire to be the hero in front of a 60,000-strong crowd.

Manchester City are well aware of Kane’s talents. The striker has 24 goals already this season and Pep Guardiola’s side targeted Tottenham’s biggest threat at source with a plan to rough Kane up. 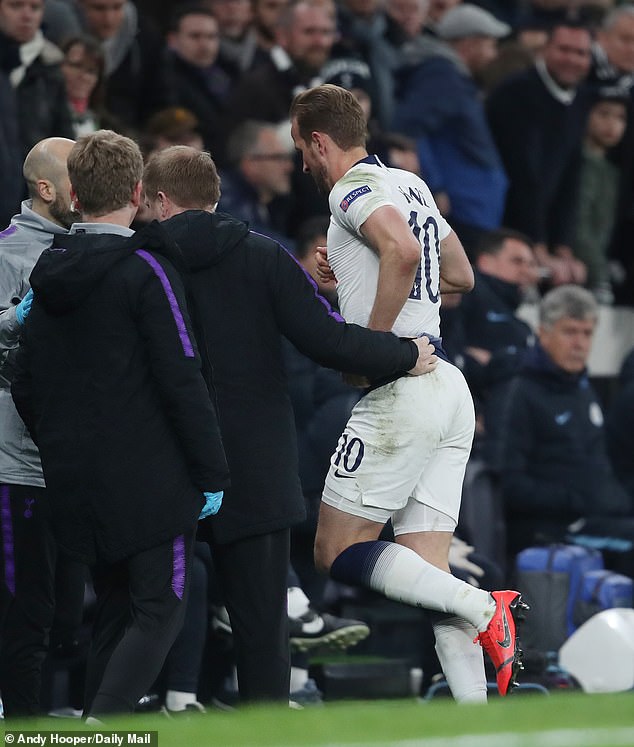 Challenges initially seemed like a typical 50-50 coming together but soon became far more cynical and nasty in nature before it turned into a night to forget for the Tottenham talisman.

As City’s early momentum subsided having missed an early penalty from Sergio Aguero, suddenly Kane’s rough treatment escalated as City looked to keep him out of the contest.

The first real issue of contention, having overlooked a number of typical scuffles between players, came in the 15th minute when Kane was sent tumbling inside the penalty area under challenge from Nicolas Otamendi. 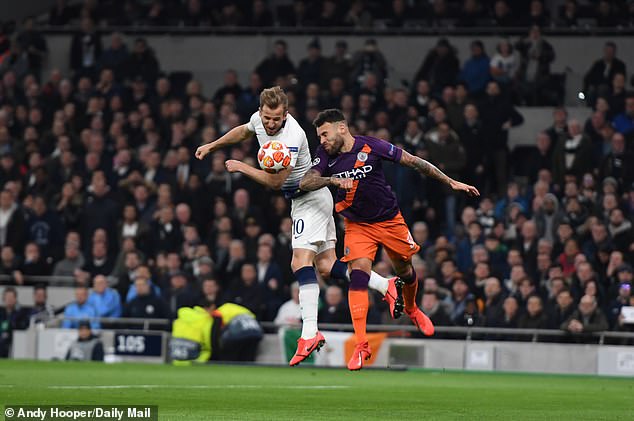 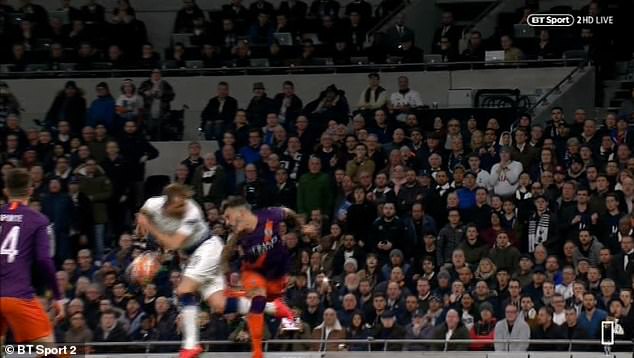 The pair battled to win a header before Kane went down holding his face, wanting a penalty 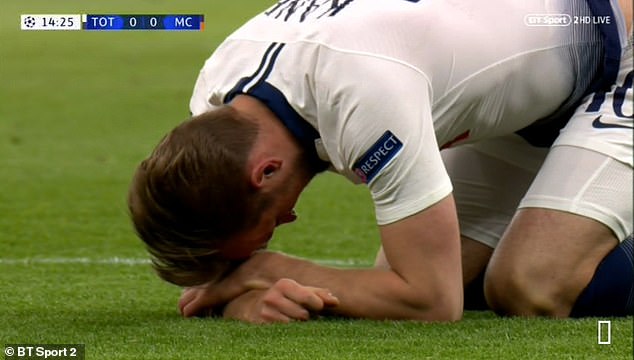 Christian Eriksen, wide on the right, saw Kane charging towards goal and as he whipped a ball pinpoint to his team-mate, City’s Argentine defender leaps with both arms in the air, catching Kane with what looks to be his elbow.

The crowd were incensed but referee Bjorn Kuipers was not interested. Kane looked in real discomfort and it spoke volumes that he stayed down clutching his face.

But replays showed the experienced referee got that one spot on. Both players went for the ball and there was nothing sinister in that challenge from either player.

What it did show, however, was that Kane’s rough treatment was only just getting started.

Fast forward to 35 minutes on the clock and it was Kane and Otamendi again. Both players not shirking a challenge as the City defender has his hands all over the striker who does well to draw the foul, controlling the ball with his back to goal. 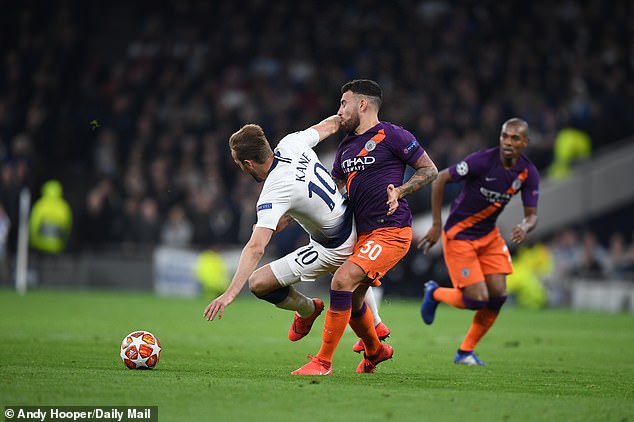 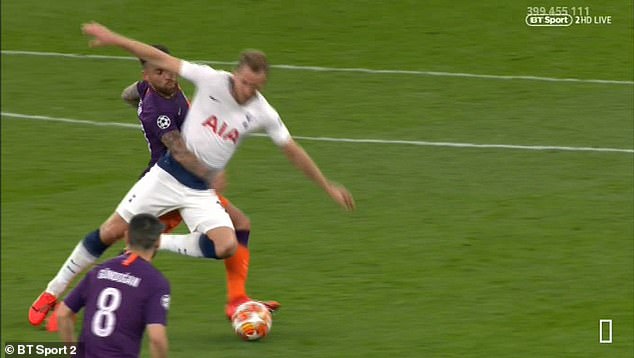 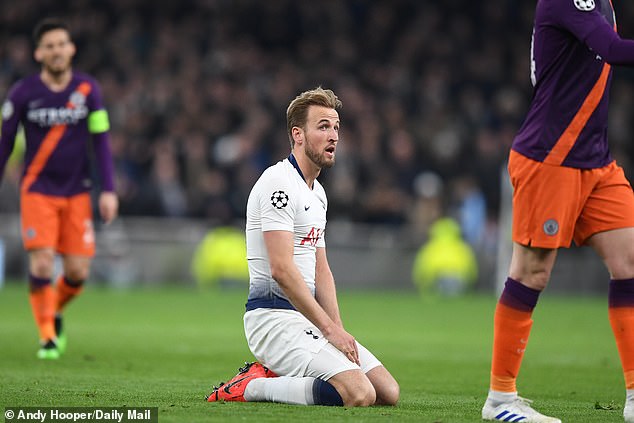 Kane was growing tired of the constant fouling from Otamendi and was visibly asking the question as to whether Kuipers was going to show a yellow card.

He was thrown to the ground but again, the referee decided against booking the City defender.

Those two challenges may be argued either way but serious questions of the treatment can rightfully be asked when replays of a 50-50 header between Kane and Fernandinho is caught on the replay.

Both players have a right to go for the ball in the air but the combative Brazilian midfielder, not one to often go a game without collecting a card, lands on top of Kane before leaving an elbow while on the ground; he can consider himself lucky that the referee missed it and he stayed on the pitch.

Kane is clearly angry at the unnecessary elbow and reacts to show his clear annoyance as he throws the City midfielder off him with both sets of players sensing the growing ferocity in the challenges. 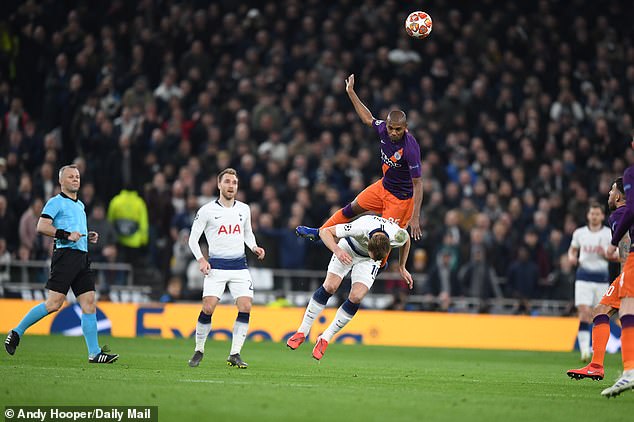 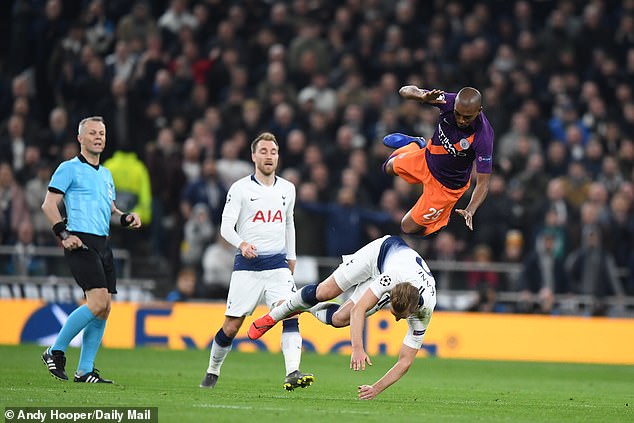 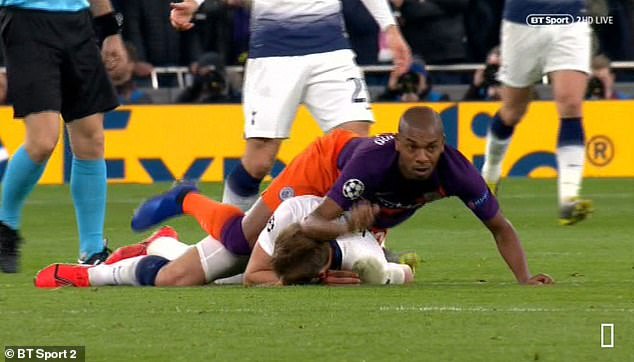 Just 10 minutes after the restart is when disaster strikes for Kane, Tottenham and potentially England this summer.

The ball breaks loose right in front of the two managers’ technical areas and England team-mates Fabian Delph and Kane both commit to getting their foot on the ball, only for the Tottenham man to come off worse.

It’s a nasty challenge, not deliberate from Delph, as the City man’s leg plants on Kane’s ankle on the follow through having beaten him to the ball.

Instantly Kane – who has previously had issues with ankle injuries – knows that his night (and potentially season) is over as he cannot put any weight on his left leg.

His manager Mauricio Pochettino is furious with Delph and makes his feelings known having been a matter of yards from the challenge.

Kane, with the help of two members of Tottenham’s staff, is helped down the tunnel and back to the dressing room with scans on Wednesday likely to show the extent of the damage. 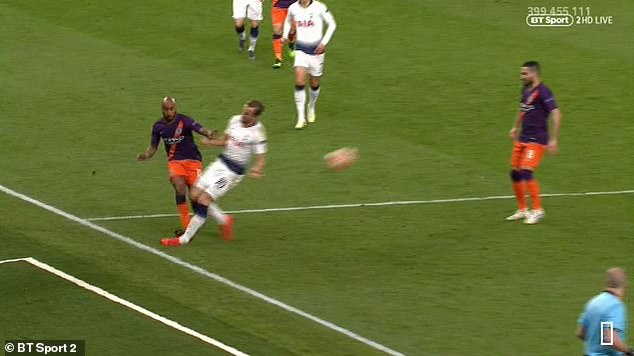 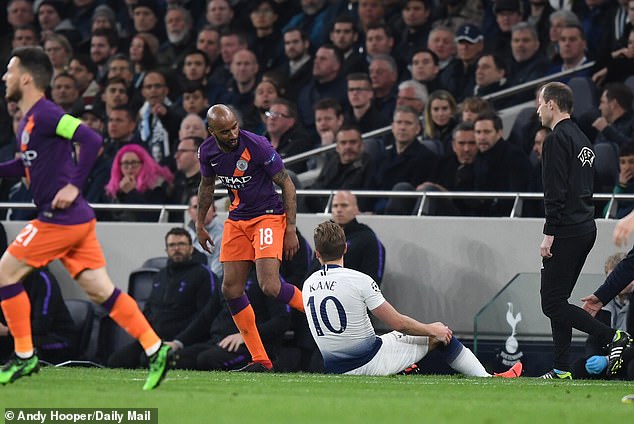 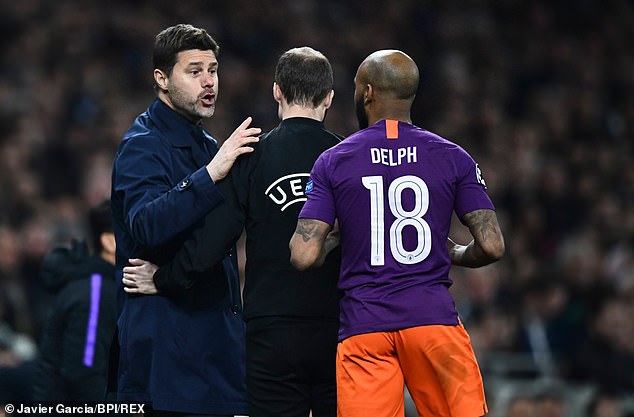 But if Kane’s reaction was anything to go by, it looks to be a really serious injury to his ankle.

Speaking after the 1-0 win, a second half goal from Son Heung-min the difference between the two sides, Pochettino told BT Sport that Delph can consider himself lucky to have not been sent off for the foul

He said: ‘We need to check after tomorrow but looks like it’s his same ankle and a similar issue, very sad, very disappointed, it’s going to be tough.

‘It’s a worry for us and for him. We hope that it’s not a big issue. He twists his ankle, we’ll see how he reacts.

‘Fabian was very disappointed in that situation but he didn’t realise that Harry didn’t intend to tackle him. He was lucky not to get a red card.

‘Both didn’t have enough challenge to make damage to one another. Fabian was talking to him but he was very upset, but both were fighting for the ball.’ 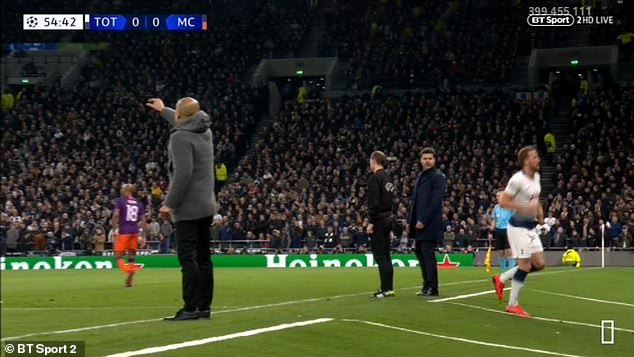 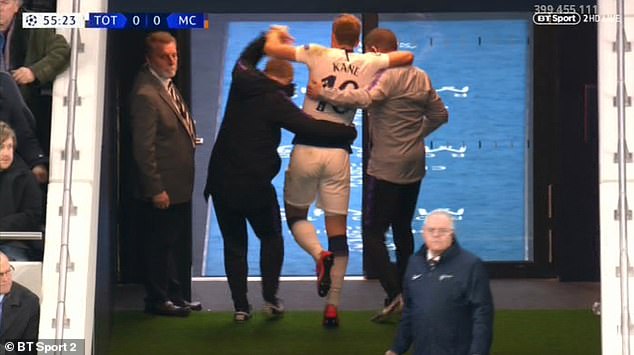 With the help of two Tottenham officials, the striker was helped down the tunnel as he limped