Harry Kane says it’s time for Tottenham to grow up and stop repeating the same immature mistakes in the Champions League.

Spurs threw away a two-goal lead for the second time in three games and opened their Champions League campaign with a draw at Olympiacos on Wednesday to leave manager Mauricio Pochettino fuming.

‘We’re not young anymore,’ agreed Kane. ‘We’re not inexperienced. We’ve played in a big games for club and country. That’s the hard part to get your head around.

‘I can see why the manager is frustrated because he’s been here for six years now and we’re still making similar mistakes to the ones we were in his first year. We’ve got to find a way to get around it, improve and get better.’

Spurs were two up and drew at Arsenal last month and Pochettino criticised his players in Greece, accusing them of lacking intensity and failing to respect his game-plan in the hostile atmosphere of the Georgios Karaiskakis Stadium.

‘We didn’t play well but we found ourselves 2-0 up away from home and that’s a great position,’ said Kane, who fired his team into the lead from the penalty spot, his 15th goal in 20 Champions League games.

‘Conceding a goal before half-time killed the momentum. It happened at Arsenal as well.

‘At half-time, the gaffer said players need to respect their positions more, whether it’s staying wider or not everyone coming in to try to get the ball. We tried to do that. I don’t think we did it particularly well all game to be honest. It was a frustrating game.’ 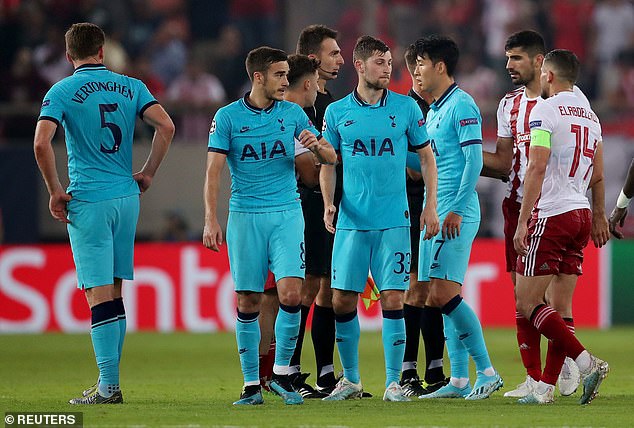 Lucas Moura scored Tottenham’s second on the half-hour but Olympiacos reduced the deficit before half-time and equalised with a penalty early in the second half.

‘Anytime you’re 2-0 up away from home, especially in the Champions League, you expect to go on to win,’ added 26-year-old Kane.

‘If we see it through to half-time it’s probably a different game. That’s something we’ve got to work on and improve on. The atmosphere was amazing – especially on the penalty when I couldn’t hear the referee’s whistle.

‘We managed to quieten them a bit but the goal before half-time got them off their seats and behind their players again. That’s what really hurts.

‘They got through so easily. Especially away from home in the Champions League, you have to knit together, and make sure you don’t concede one way or another, whether that’s being more compact, going a bit more direct and seeing out the clock or something else.

‘Even second half, we had opportunities to score if the decision making was better in the final third. It’s something we have to improve on. 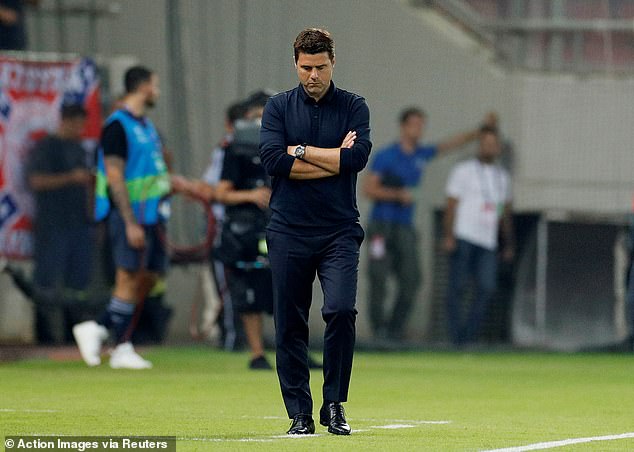 ‘I don’t doubt the mentality of the team. We’ve come through a lot in the last few years and last year reaching the Champions League final after being down and out in the group. A bit more maturity in those situations will help.’

Tottenham started poorly in Europe last season, taking only one point from their first three games but recovered and scraped through to qualify for the knock-out rounds and went on to the final where they lost to Liverpool in Madrid.

‘Teams are going to want to beat us and put that on their season. We have to be prepared for that.

‘We’re still backing ourselves to win enough games and get through the group. We need to take care of our home games and pick up one or two results away. It makes the game in a couple of weeks important to win.’