‘We look far to open’: Harry Maguire urges Man United to tighten up in defence after their disappointing 2-1 defeat to Brighton at Old Trafford… as the Red Devils captain admits there is ‘competition for places’ at centre-back

Manchester United captain Harry Maguire admitted that his side ‘looked far too open’ during their poor 2-1 defeat to Brighton on the opening Sunday of the Premier League season.

Pascal Gross scored twice in the first half to put Man United 2-0 behind at the break, handing Erik ten Hag a tricky first half-time team talk during his first top flight match in charge.

Wantaway Cristiano Ronaldo came on in the second-half and the Red Devils clawed one back through an Alexis Mac Allister own goal in the 68th minute, but Ten Hag’s side were ultimately unable to break Brighton down again and find an equaliser.

Maguire was disappointed that the team could not hand the new Dutch manager his first win at Old Trafford, especially considering their poor form last campaign.

‘Everyone knew the task,’ he said. ‘We had a bad season last season. We’ve got a new manager trying to put his philosophy on the team but when we don’t get it right we look far too open.

‘It’s great to have Lisandro Martinez at the club. We have competition for places at centre-back. We’ve not played much together and in that first period we weren’t on the same wavelength.

‘Centre-back partnerships are built over time and we will get a lot better and keep clean sheets.’

He added: ‘We went into the game positive, we had a good pre-season and it was the worst possible start to be 2-0 down at half-time at Old Trafford. 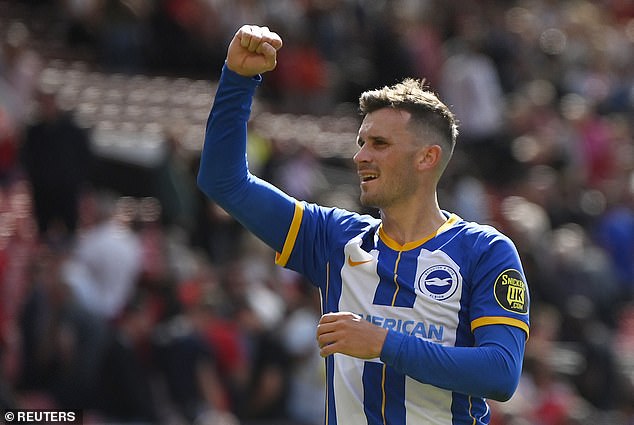 ‘We got a goal back but we huffed and puffed a bit and it’s a bad start for us.

‘We started pretty well and on the front foot and as a team we had control. Then we conceded the first goal and that knocked us badly.

‘We need to look at not letting that first goal set us back as much as it did. It was a nightmare start to be 2-0 down at half-time.’

Unlocking Brighton’s defence in the second-half proved a real challenge for United and Maguire admitted the team needed to be more creative in fashioning goal scoring opportunities.

He said: ‘We spoke about getting the next goal [at half-time]. I think in the second half you saw good parts to our game but overall we didn’t do enough.

‘We had a lot of pressure and a lot of ball but we need to be a bit more creative and we need to improve on that.

‘It’s something we need to address or it’ll keep happening. The first goal felt like a big blow to all 11 of our players.’