He’s been busy filming for his new music video this week.

And Harry Styles appeared to be in good spirits as he enjoyed a dip in the pool and soaked up the sunshine on Italy’s Amalfi coast on Friday.

The singer, 26, flaunted his tattooed torso as he took in the stunning scenery and was seen putting on an animated display as he chatted to a mystery woman.

Downtime: Harry Styles appeared to be in good spirits as he went shirtless for a dip in the pool while on Italy’s stunning Amalfi Coast on Friday

Harry donned black swim shorts with a white and red trim for the swimming session as well as a chain necklace.

The former One Direction star slicked his brown locks back as he emerged from the water and quickly wrapped a towel around himself.

While drying off, Harry chatted enthusiastically to a pal who was perched on a stone wall close to the pool.

She donned an over-sized blue t-shirt and long blue skirt as they talked and checked their phones while sitting in the sunshine. 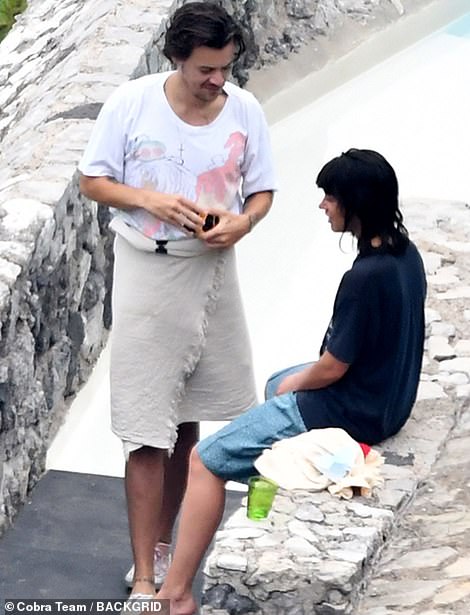 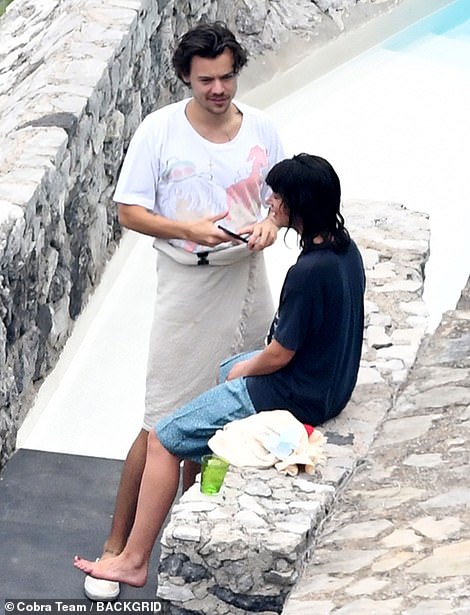 Animated: Harry put on an animated display as he chatted to his pal, who was perched on a stone wall, after his swim 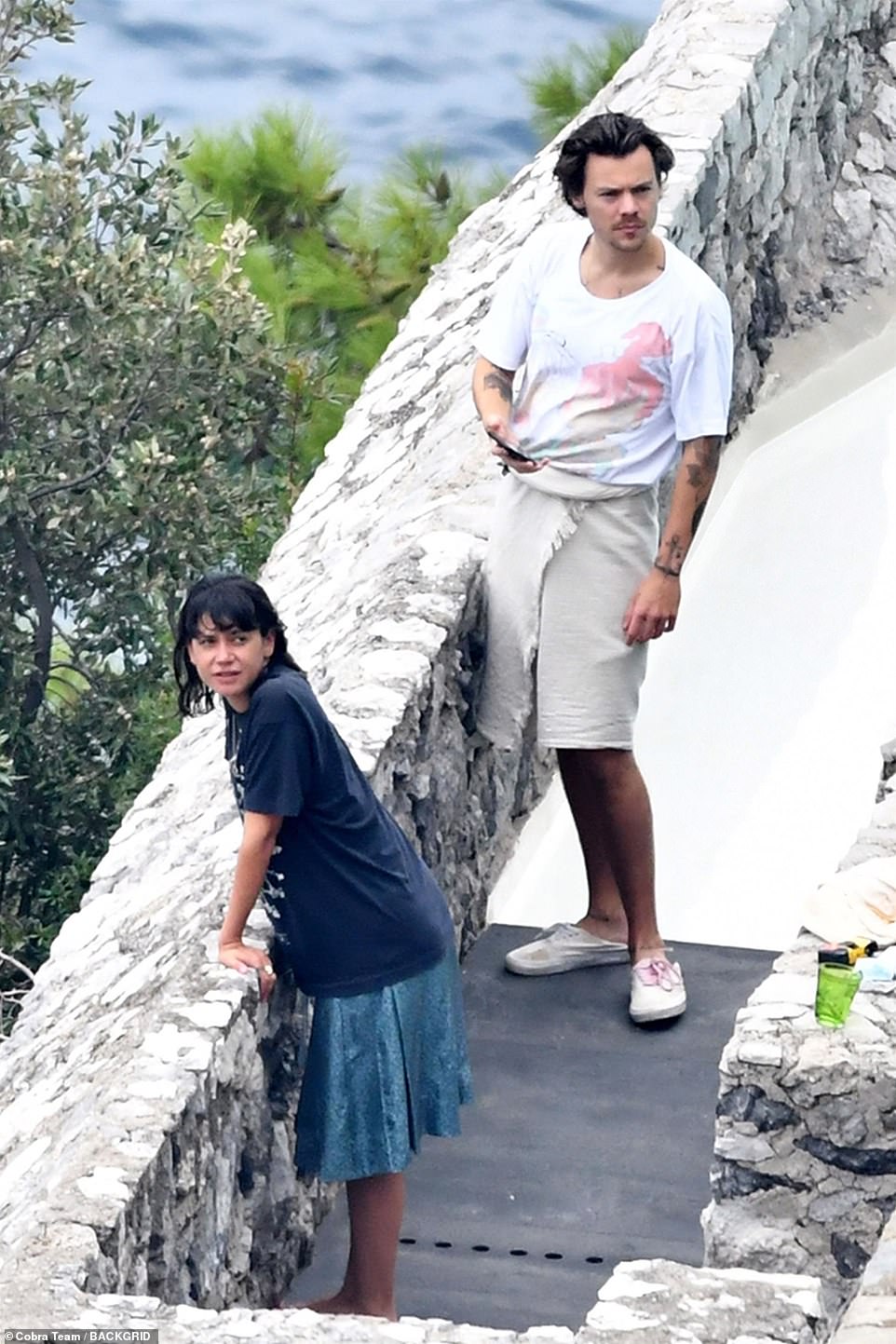 Casual: Harry wrapped a towel around waist and added a white t-shirt with a red pattern on the front as he dried off

Making the most of the evening sun, Harry made sure to snap a few pictures of their surroundings and leaned over the pool’s outer wall to have a closer peak at the view.

Earlier this week Harry looked every inch the James Bond as he got behind the wheel of a vintage Alfa Romeo and a speed boat to shoot scenes for the video to accompany another song release from his solo album Fine Line.

In a video filmed by @microba96 and shared on Twitter on Wednesday, the heartthrob was seen speeding around the coast roads in the retro ride.

Another car rigged with cameras was in front, capturing Harry as he confidently drove around. 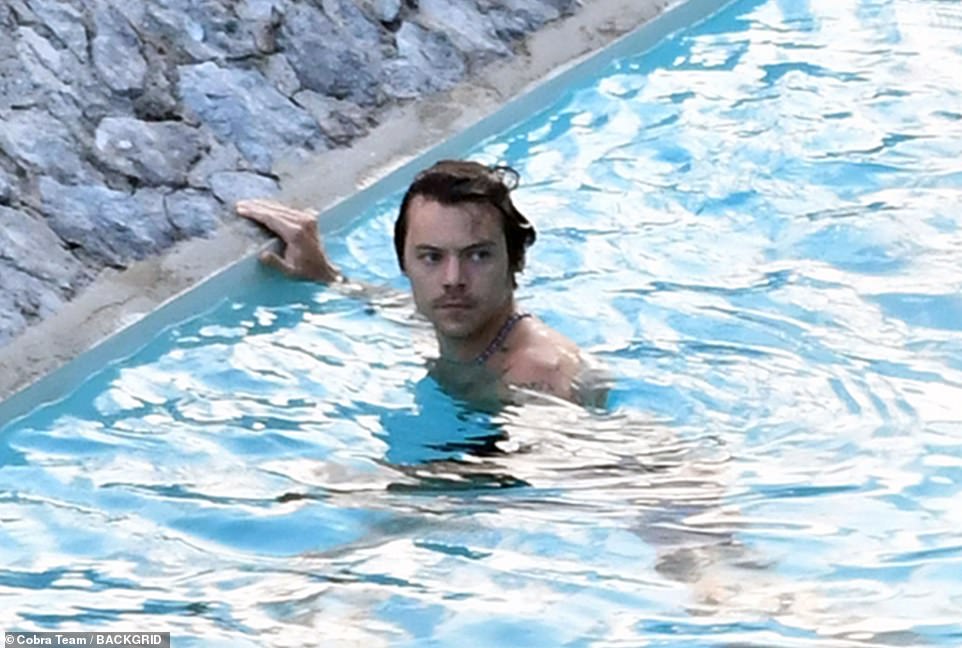 Taking a dip: The singer held onto the side of the pool during his stint in the clear blue water

Here he comes: Harry opted for black swim shorts with a white and red trim during the swimming session

Harry’s return to work comes after he made the decision this month to postpone another leg of  his 2020 Love On Tour shows.

The singer took to Twitter last week to announce that all of his shows would be delayed ‘until further notice’ amid the COVID-19 pandemic which has swept the globe.

Harry also shared his ‘hope’ to play his scheduled 2021 dates, as he insisted that ‘everyone’s health and safety remains top priority’.

Harry tweeted: ‘Everyone’s health and safety remains our top priority, which is why I unfortunately have to postpone all 2020 shows in South America, Mexico, Australia and New Zealand until further notice. 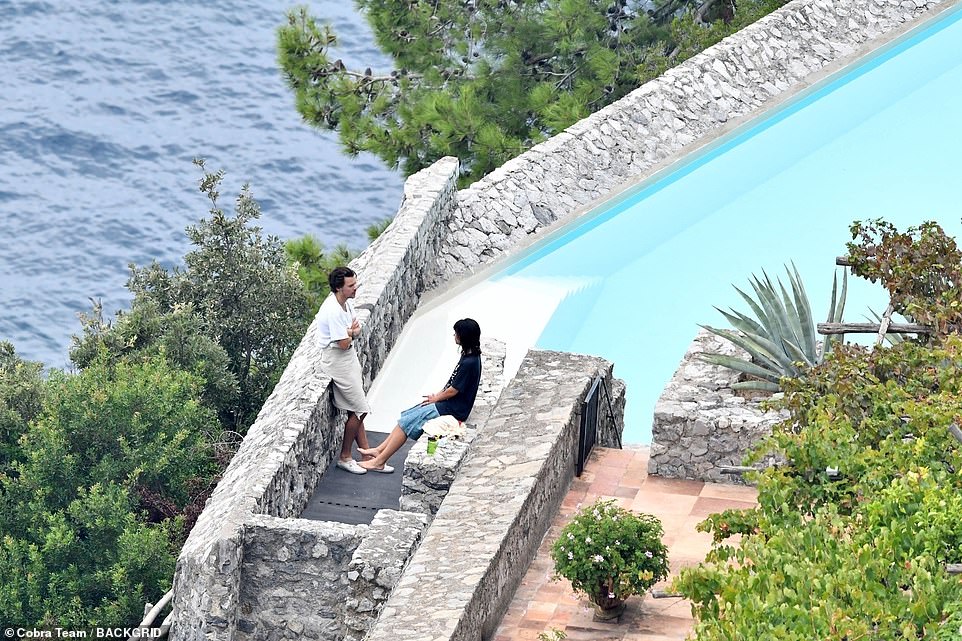 ‘I really hope to play the shows as planned for 2021 but will continue to monitor the situation over the coming weeks and months. I can’t wait to see you all on the road as soon as it’s safe to do so.’

The announcement comes three months after Harry postponed the North America leg of his concert tour.

In June, the hitmaker was forced to reschedule the Love On Tour shows until next summer, with the run set to kick off on August 14 and wrap on October 31, 2021, due to the ‘ongoing threat from Covid-19’.

During his time off the road, the singer has vowed to use his time to ‘listen and educate’ himself on ‘how’ he can ‘help more in the fight for justice and equal rights’, following the death of George Floyd and the global Black Lives Matter protests.

In a powerful statement shared to his social media at the time, Harry wrote: ‘This summer we were excited to be bringing Love On Tour to North America.

‘However, due to the ongoing threat from Covid-19 we have been forced to reschedule these dates to next summer.

‘The well-being of my crew, and all the fans around the world will always hold top priority.

‘I can’t wait to see you all out on the road, as soon as it’s safe to do so. ‘We are in a moment of necessary change and growth in the world.

‘I will be using this time to listen, and to educate myself on how I can help more in the fight for justice and equal rights for all in the future. I hope that you will take the time to do the same. Treat people with kindness.’