Prince Harry will not be flying back to join Meghan and Archie in Canada yet as he continues to thrash out the details of the ‘Megxit’ deal after it was confirmed the Sussexes would be stepping down as senior royals.

But Harry broke cover for the first time tonight in a video on the ‘Sussex Royal’ Instagram page to reveal the power his Invictus Games had to ‘heal families’ after the Queen confirmed the split in the Royal Family on Monday.

The Duke of Sussex posted the video to announce that the ‘story continues’ with Dusseldorf in Germany hosting his charity sports competition for wounded veterans in 2022.

Harry’s appearance follows the first sighting of Meghan since the crisis talks at Sandringham on Monday. The Duchess, who was absent from the meeting, was seen smiling as she boarded a sea plane on Vancouver Island in Canada yesterday.

On Monday, the Queen revealed in a deeply personal statement that she had agreed for Harry and Meghan to begin a ‘new life’ as an ‘independent’ family.

Prince Harry is expected to remain in the UK into early next week to hammer out the details of this unprecedented arrangement with officials at Buckingham Palace before heading back to join Meghan and Archie in Canada.

Prince Harry released a video on the ‘Sussex Royal’ Instagram to reveal the power his Invictus Games had to ‘heal families’, just days after he and Meghan announced they were leaving their roles as senior royals. He is understood to be remaining in the UK until at least early next week to meet with officials to help thrash out the details 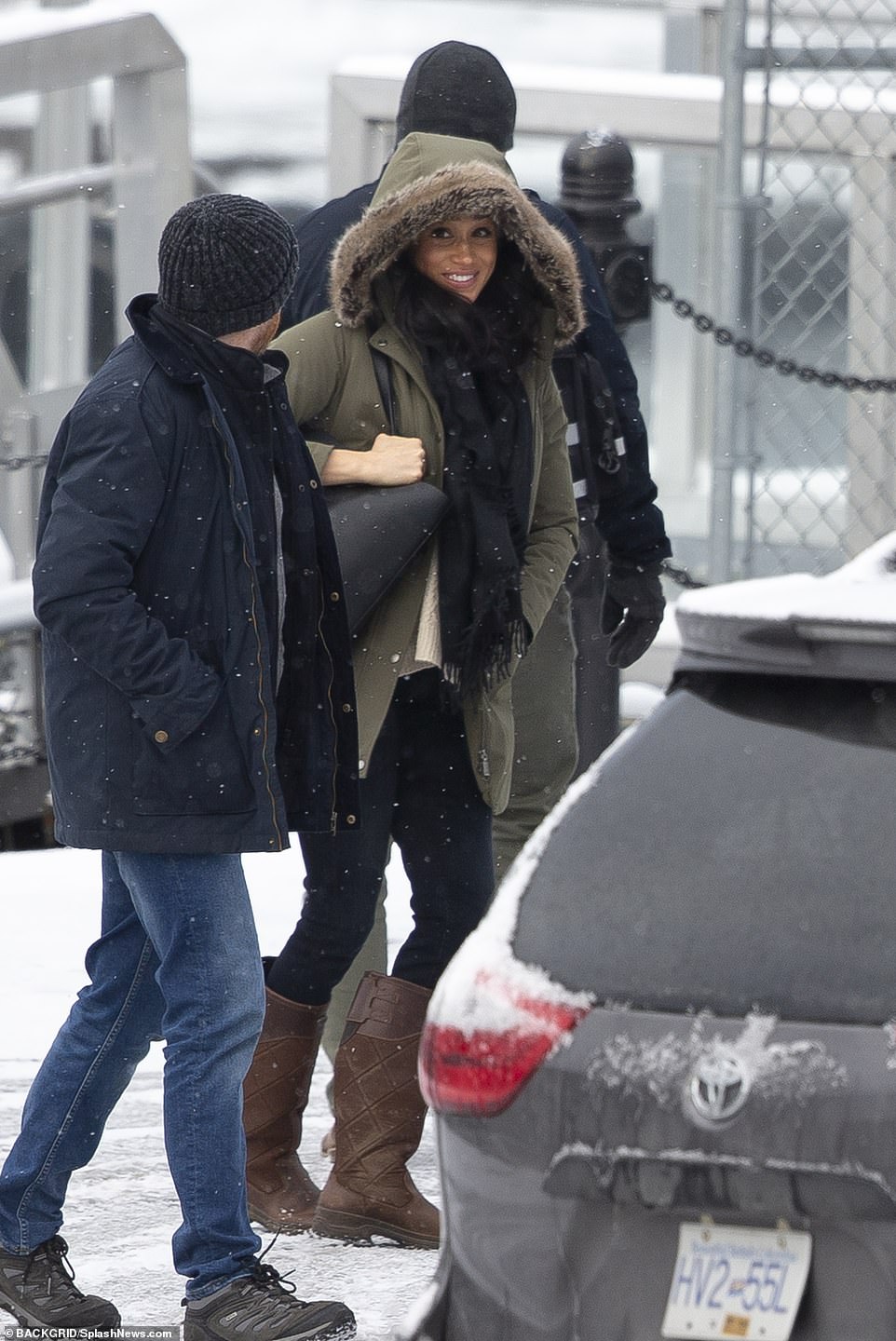 Meghan is seen for the first time since ‘Megxit’ in Vancouver on Tuesday boarding a sea plane. There was speculation Meghan was barred from dialling in on Monday’s Sandringham summit for security reasons, however Palace sources have said the Sussexes thought ‘it wasn’t necessary for the duchess to join’

He is understood to be attending meetings to help iron out the details of how he and the Duchess will operate in their unprecedented new roles. The Queen is said to have demanded that her officials find a solution within days, however, royal experts say it will take far longer.

There was speculation she had been barred from dialling in on the meeting from Vancouver for security reasons, however Palace sources have said the Sussexes thought ‘it wasn’t necessary for the duchess to join.’

The security bill alone for the pair is estimated at around £1million per annum, meanwhile Harry is thought to draw a salary somewhere in the region of £2.3miillion each year from his father’s estate, the Duchy of Cornwall. 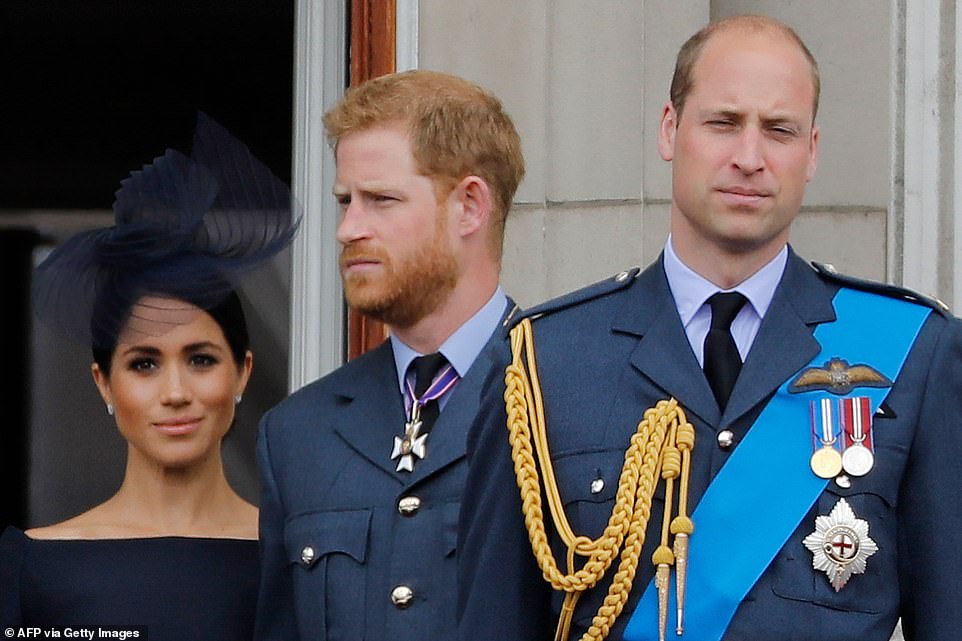 Ahead of the Sandringham summit it was reported that Prince Harry and his wife had feld ‘bullied’ by Prince William, a claim which was strenuously denied by the brothers in a joint statement (pictured: the Sussexes and the Duke of Cambridge at Buckingham Palace in 2018)

Today Meghan’s half-sister Samantha said their father Thomas was ready for what has been dubbed ‘the trial of the century.’ 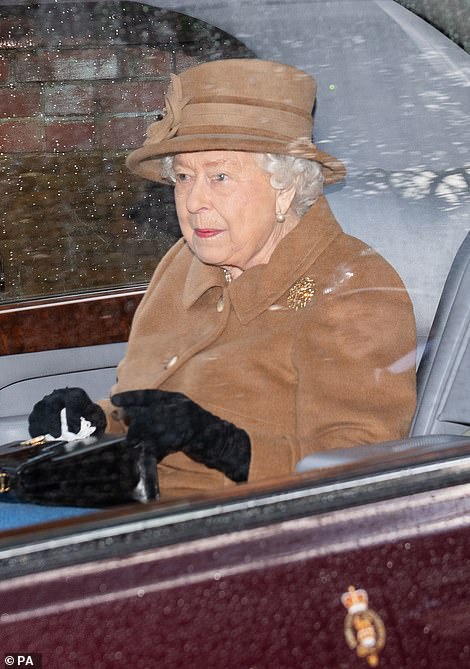 The Queen leaving a church service at Sandringham on Sunday

Samantha Markle, 55, who is Mr Markle’s daughter from his first marriage, told the BBC: ‘If he is called, he will come.’

It comes after defence papers revealed yesterday that Associated Newspapers, the Mail on Sunday’s publisher, could call Mr Markle, 75, as its star witness.

The Duchess of Sussex is suing Associated Newspapers for publishing a letter she wrote to her father in August 2018 in which chastised him for speaking to the press and how he had ‘broken her heart into a million pieces’.

Ms Markle has previously been highly critical in interviews about Meghan’s character, including calling her a ‘social climber with a soft spot for gingers’.

And last week she branded Meghan and Harry’s decision to step back as senior members of the Royal Family as a ‘slap in the face’.

Mr Markle, 75, has given lawyers previously unseen text messages sent in the build-up to Meghan’s wedding to Prince Harry that reveal the breakdown of the relationship between father and daughter.

Some of the messages were detailed yesterday in defence papers filed at the High Court in London.

The documents say that after Mr Markle messaged his daughter saying he couldn’t come to her wedding because he had been rushed to hospital for emergency heart surgery and told not to fly on health grounds, he received a text that appeared to be from Prince Harry.

The estranged father of the Duchess of Sussex is expected to be called as a key witness for the defence in a court case she has brought against a newspaper (pictured: Meghan Markle as a youngster, with her father Thomas Markle)

The message admonished him, accused him of causing hurt to his daughter and did not ask about his health. It left Mr Markle ‘deeply hurt’.

In return, Mr Markle wrote: ‘I’ve done nothing to hurt you Meghan or anyone else … I’m sorry my heart attack is … any inconvenience for you.’

The Duchess of Sussex launched legal action against Associated Newspapers last year after it published extracts of a letter she wrote to her father in August 2018. 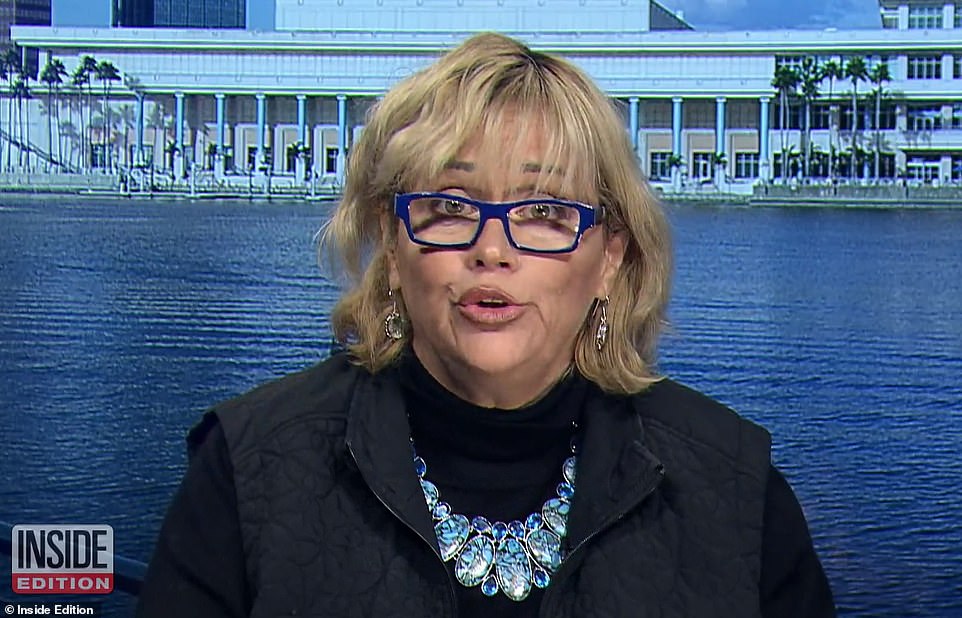 Samantha Markle, who is Thomas Markle’s daughter from his first marriage, is pictured on US TV show Inside Edition on January 9. She said of Mr Markle today: ‘If he is called, he will come’

Meghan, 38, has accused the newspaper – the sister paper of the Daily Mail – of breaching her privacy, her data protection rights and her copyright when it published extracts.

The MoS filed its defence to her case at the High Court in London yesterday. It denied her claims and argued there was a ‘huge and legitimate public interest’ in the Royal Family, including its ‘personal and family relationships’.

The duchess was last night pictured in Canada for the first time since she returned there following the bombshell ‘Megxit’ statement. She was seen boarding a sea plane from Vancouver Island which appeared to be destined for Whistler ski resort.

Meghan launched her legal action against the MoS last year after it published excerpts of her letter to her father. Mr Markle gave the letter to the newspaper after unnamed friends of the duchess told the People magazine that she had written the ‘loving’ letter in an attempt to repair their relationship.

Lawyers for the newspaper alleged that Meghan had ‘knowingly’ allowed her friends to leak details of the letter to the magazine – effectively that she had helped to breach her own privacy. 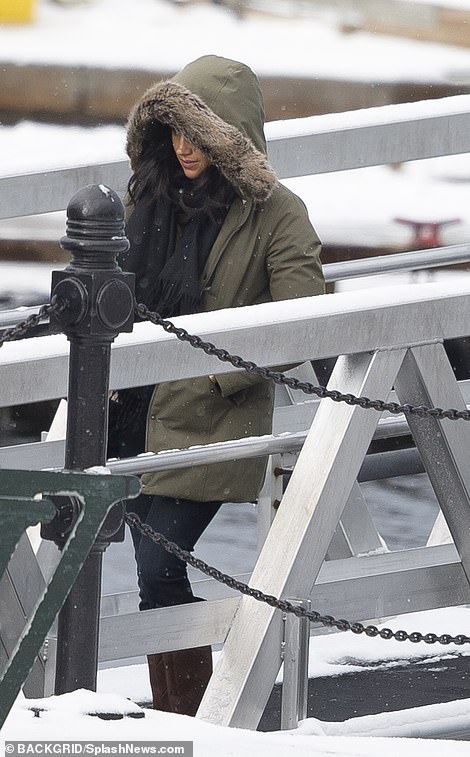 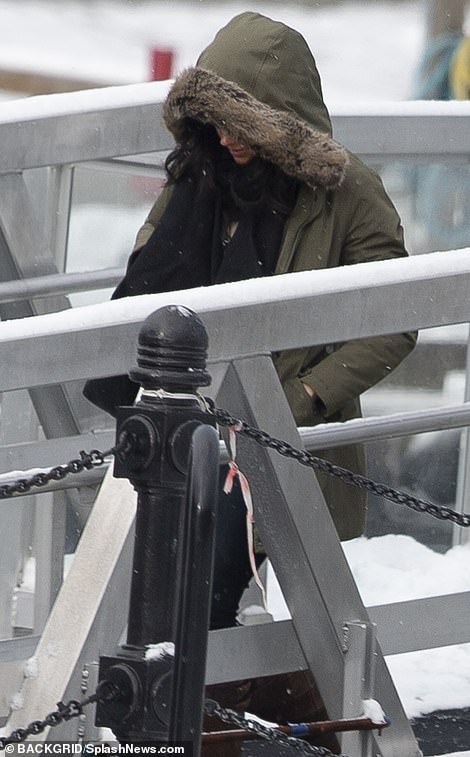 The Duchess opted to recycle her wardrobe, wearing a $399 Barbour coat, first worn by her in March 2017 and paired it with a $195 Cuyana bag she wore to Wimbledon in June 2019. She wore Le Chameau boots retailing for $493.36

This is the Duchess of Sussex’s first sighting since news of ‘Megxit’ broke last week. She was seen boarding a small seaplane from Victoria Harbour Airport to the mainland

If the case goes before a judge, the paper said it would ask for Meghan to be forced to hand over all communications in which she had ’caused or permitted her friends to provide information about her to the media or to seek to influence what is published about her’.

It could lead to the prospect of Meghan coming face-to-face with her father in the High Court.

Mr Markle, a retired Hollywood lighting director who lives in Rosarito, Mexico, has said his daughter cut off all contact with him after her wedding, except for the letter at the centre of the case.

If he were to be called as a witness, he would effectively have to brand his own daughter a liar who had invaded her own privacy. The Sussexes have said they will fund the legal proceedings privately.