Harvard University and Yale University are the targets of a new federal investigation, an ongoing probe that claims schools across the U.S. have failed to disclose some $6.5 billion in foreign funding.

The Department of Education, in letters to the two schools dated on Tuesday, demanded records detailing any foreign contacts with a number of foreign countries and entities.

‘This is about transparency,’ said U.S. Secretary of Education Betsy DeVos in a statement. ‘If colleges and universities are accepting foreign money and gifts, their students, donors, and taxpayers deserve to know how much and from whom. Moreover, it’s what the law requires.’

Section 117 of the Higher Education Act requires American Title IV-eligible colleges and universities to report gifts from, and contracts with, any foreign source that exceed $250,000 in value and to disclose any foreign ownership or control, twice each year.

Department officials accused the schools of actively soliciting money from foreign governments, companies and nationals, who are known to be hostile to the U.S. and potentially seeking to steal research secrets and ‘spread propaganda benefiting foreign governments,’ according to a document reported by the Wall Street Journal, which first reported the probe.

The department also noted that although foreign cash appears to flow to the nation’s richest universities, ‘such money apparently does not reduce or otherwise offset American students’ tuition costs.’

Harvard and Yale told the Journal that they are working on responses to the Education Department.

In a letter to Harvard posted on the DoE website, the department asked the school to disclose any records of gifts or contracts involving the governments of China, Qatar, Russia, Saudi Arabia and Iran. 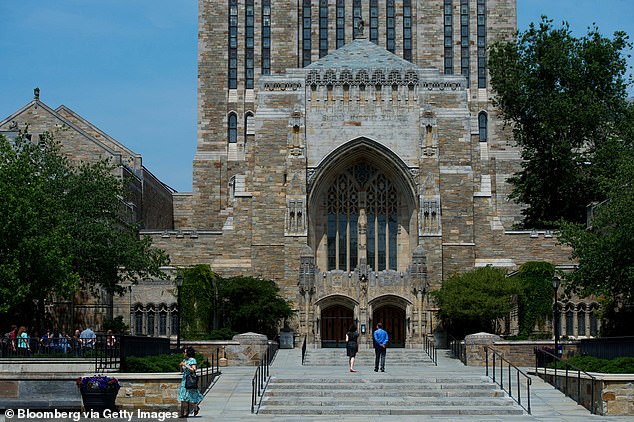 In a separate letter to Yale (above), the department demand records regarding gifts from Saudi Arabia, China and its telecom giants, and others

The letter also asked for any records for such deals with Chinese telecom giants Huawei and ZTE, and Kaspersky Lab and Skolkovo Foundation of Russia.

In a separate letter to Yale, the department demand records regarding gifts from Saudi Arabia, China and its telecom giants, and others.

The department accused Yale of failing to disclose at least $375 million in foreign funding from 2014 to 2017, when the school filed no disclosure forms.

The department accused the universities as well as others as ‘multi-billion dollar, multi-national enterprises using opaque foundations, foreign campuses, and other sophisticated legal structures to generate revenue.’

If the schools refused to disclose the information requested by the DoE, the matter can be referred to the Justice Department for civil or criminal action.