Harvard scientists have proven the existence of an entirely new state of matter, which could ultimately transform scientific research, and lead to cures for diseases like Alzheimer’s.

The team from the Massachusetts university were able to prove that the substance, called quantum spin liquid, exists. Their discovery came around 50 years after scientists first predicted that the state of matter could exist.

While the concept of the substance, and experiments used to prove it are very complicated, it could ultimately have extremely useful real-world applications.

That is because quantum spin liquid could dramatically speed up the development of new quantum computers.

Those machines, whose development is still in its infancy, could be used to solve problems far more quickly than computers can now. Scientists predict they’ll transform medicine, and could ultimately produce cures for diseases which are currently impossible to treat effectively, including Alzheimer’s

A new state of matter that was predicted by scientists some 50 years ago has been proven in a lab by a team of Harvard physicists. The new state is called quantum spin liquid (stock photo)

Matter is any substance that has mass and takes up space by having volume.

Quantum spin liquid was first predicted by physicist Philip W. Anderson about in 1973, but the state has never been observed in experiments.

However, instead of trying to prove its existence on paper, the Harvard team used an experimental approach to recreate it in a lab.

Giulia Semeghini, a postdoctoral fellow in the Max Planck-Harvard Research Center for Quantum Optics and lead author of the study, said in a statement: ‘A few theorists at Harvard came up with an idea on how to actually create this phase, instead of in the usual setting where it was looked for, which were basically solid systems — condensed-matter systems — how we could recreate it using our atoms.’

Quantum spin liquid has magnetic properties, due to the atoms becoming entangled and its material constantly changing. 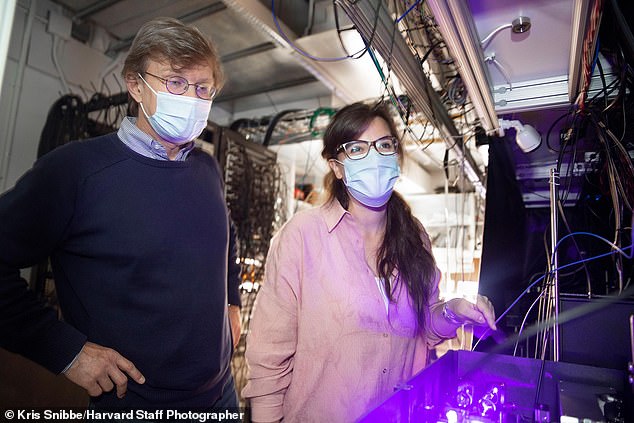 A traditional magnet, however, is designed in a pattern that looks like stripes on a  checkerboard, or a lattice, The Jerusalem Post reports.

This means its particles are connected despite being separated by distance.

It also has magnetic properties, as its material is designed like a lattice.

The Harvard psychists used the simulator to create the lattice pattern, which they then placed atoms inside the design and observed them interact and entangle.

The team used the simulator to create the lattice pattern, which they then placed atoms inside the design and observed them interact and entangle.

Semeghini said that standard quantum computers have individual quantum bits, or ‘qubits’ — particles that can encode information — that are very ‘fragile against external perturbations.’

Because topology is very hard to break, the topological qubit is very resistant to error.

Physics professor Mikhail Lukin, senior author of the study and co-director of the Harvard Quantum Initiative said the group has only created a ‘baby version’ of the topological qubit that is far from being useful for actual application, but that the finding is exciting nonetheless.

‘But the fact that we can create such states, and we can really play with them, we can poke at them, we can actually kind of talk to them and see how they respond — this is what’s exciting.’