Reports are emerging of what ex-White House Press Secretary Sean Spicer’s tenure at Harvard University is like.

Spicer is a fellow at the John F Kennedy School of Government’s Institute of Politics for the 2017-2018 academic year. In this capacity, his job is ‘to engage with the Harvard community,’ per the Institute’s website.

Students spoke to the Huffington Post about the question and answer sessions and meals during which Spicer has engaged with students. Per Harvard’s policy, all talks by fellows are given off the record.

‘The entire thing was just a defense of every waking moment he served,’ one student told the Huffington Post.

‘He was pretty much just as slimy and weaselly as I’d thought he was,’ another said.

Sean Spicer is a fellow at the Harvard University. As part of his role with the John F Kennedy School of Government’s Institute of Politics, he is giving question and answer sessions with students and dining with them 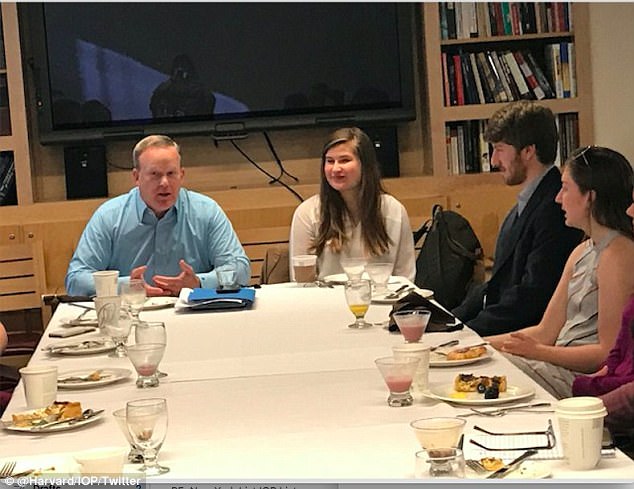 Pictured is one such gathering at Harvard from this past week. One student told the Washington Post: ‘He was pretty much just as slimy and weaselly as I’d thought he was’

Another branded Spicer as ‘incredibly inarticulate,’ echoing a repeated criticism of his scattered and disorganized White House press briefings.

Spicer was brought to Harvard to provide students with insights into ‘White House communications. One of his co-fellows is Robby Mook, who led Hillary Clinton’s 2016 election campaign.

‘Broadening the range and depth of opportunity for students to hear from and engage with experts, leaders and policy-shapers is a cornerstone of the Institute of Politics.

‘We welcome the breadth of thought-provoking viewpoints on race, gender, politics and the media,’ said the Institute of Politics’ director in a statement about Spicer, Mook and their fellow 2017-2018 fellow Mayor Sylvester “Sly” James, Jr, the mayor of Kansas City. 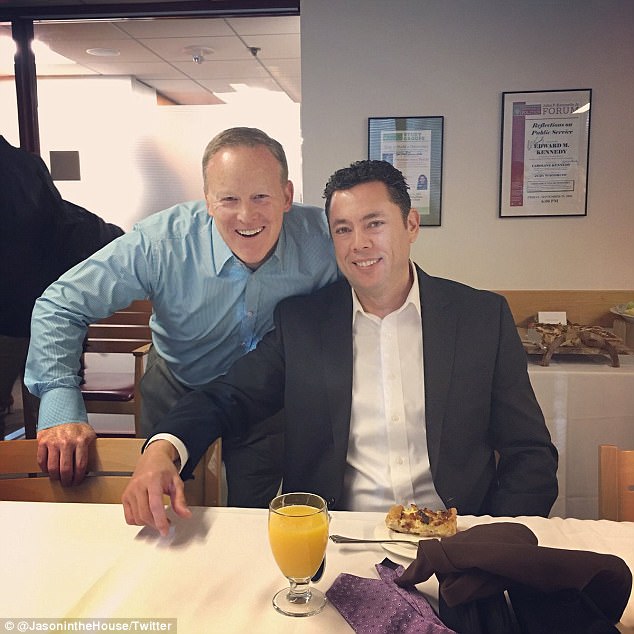 Spicer is pictured with Jason Chaffetz, who is currently a Fall Semester Fellow at the Institute of Politics. Chaffetz is a former Republican Congressman who represented Utah 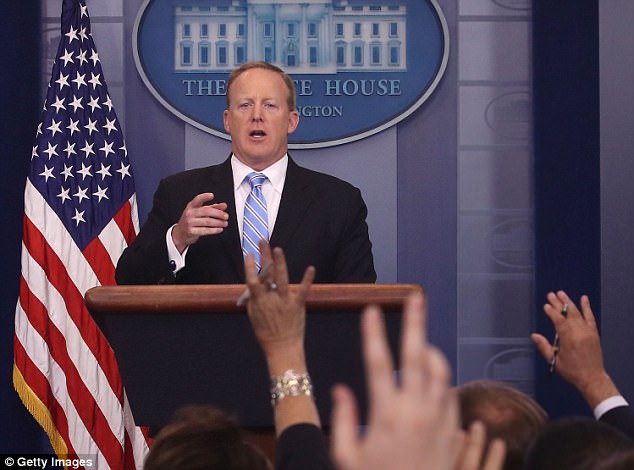 Spicer served as White House Press Secretary from January to July 2017. Asked about lies during his tenure, he said: ‘I’m a spokesperson for the president, and my job is to say what he wants me to say.’ Spicer is pictured during a press briefing on June 26

Students told the Huffington Post that Spicer’s talks have ranged in scope from the contemporary state of American politics, to his battles with the media to lies he told during his six-month stint as White House Press Secretary.

‘I’m a spokesperson for the president, and my job is to say what he wants me to say,’ he said when asked about being called out on his lies.

‘The Trump administration is being held to an unfair higher standard.’

Discussing Kellyanne Conway’s infamous phrase, he added: ‘Alternative facts are legitimate tools to use in politics.’

Spicer also discussed how his ‘coolest moment’ in the White House was taking a selfie with the New England Patriots.

Former journalist and current Kennedy school student Michael Auslen noted in an Instagram post: ‘All it took was me leaving journalism and him getting pushed out of the White House to get an off-the-record briefing from Sean Spicer.’

The questions were not pre-screened, according to students who spoke to the Huffington Post.

Spicer has also been pictured enjoying himself with one of the Institute’s Fall Semester Fellows, Jason Chaffetz, a former Republican Congressman of Utah who formerly chaired the House Oversight Committee.

In a tweet of the pair smiling at breakfast, Chaffetz wrote: ‘Don’t even think of taking any of my bacon.’

Speaking to the Hollywood Reporter on Thursday, Spicer said that students have been ‘respectful and ‘inquisitive’.

Describing the point of his role at Harvard, he said: ‘To let people ask tough questions to gain an understanding into what the experience was like.’